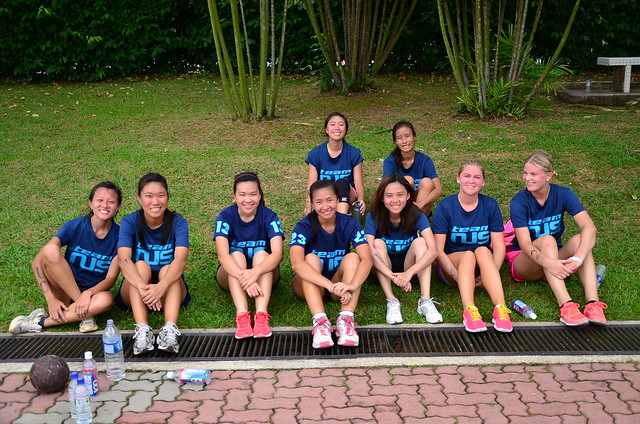 Both teams were determined to win this match, doing so would mean playing in the finals 2 hours later against Team Medicine (Who went into the finals directly as SDE players did not show up). Players from both sides went through the pre-match formalities and the whistle to commence the game was blown soon after.

Team Law started on the offensive right after the whistle, with swift passes and quick dribbling, Team Law had numerous opportunities to score, only for the Biz keeper to deny them of every shot on target.

This continued for a few minutes until Team Biz managed to catch the Law players off guard on a counterattack on the wing which led to the first goal being conceded by Law.

Law responded quickly, equalising the score when Jaime (Team Captain) capitalised on a gap in the Biz defence to fire a shot into the bottom left corner of the goal. 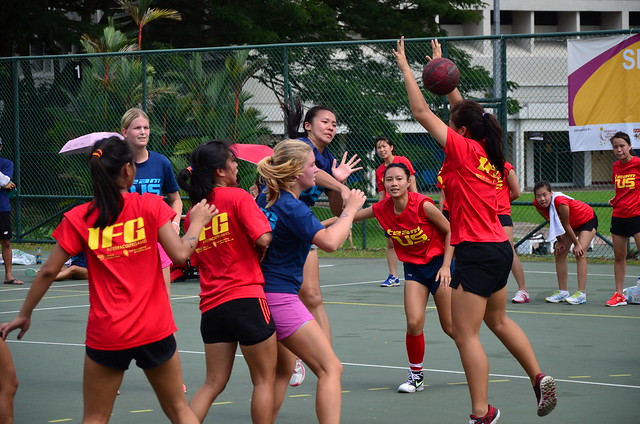 Captain Jaime with one of her many shots on goal

Law continued to play aggressively, shooting quite a number of shots at the Biz goal. The Biz defence was solid, but not solid enough to prevent our exchange student Amanda from scoring 2 minutes later from a long range shot. 2-1 to Law! 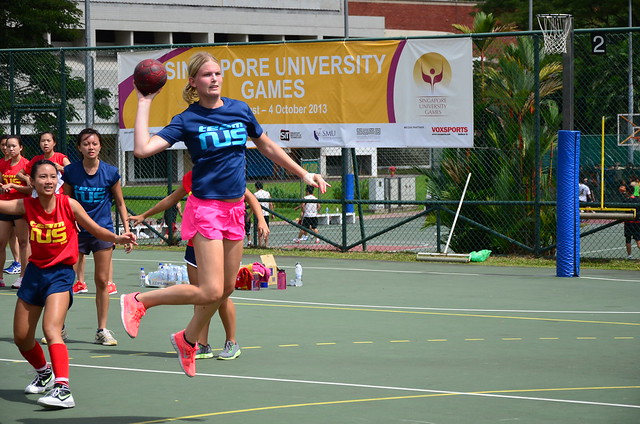 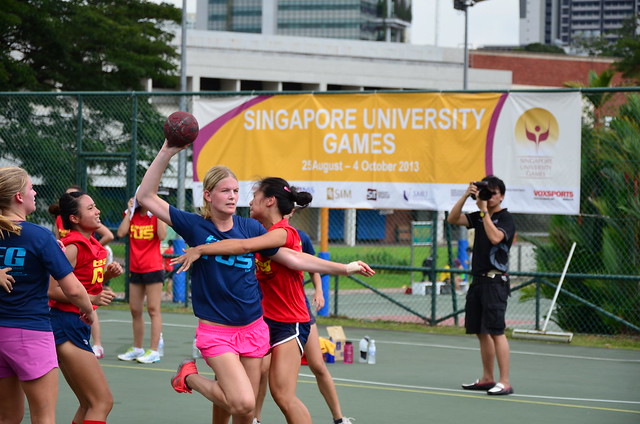 The Biz players also decided to play aggressively soon after, committing foul after foul in an attempt for Law to lose possession. Law responded by acting the same way, leading to a rather back and forth game for the next few minutes.

Team Biz managed to equalise soon after with a counter attack and shot onto the bottom right corner. Law keeper Jolyn stretched her leg in a last ditch effort to save the ball but the ball had unfortunately passed the line.

This game continued to be rather back and forth, with both team keepers making very good saves on both sides of the court. Team Biz played more and more aggressively with each minute passing, and this led to the third goal scored by them soon after before the half time whistle was blown.

Team Law played a lot more defensive in the 2nd half, choosing to retain possession rather than blindly shooting. Team Biz however, continued to play aggressively, and pushed most of the gameplay to the area around Team Law’s goal boundary.

There were many good shots by both sides for the next few minutes with players Jaime, Amanda and Dorothy managing shots on target (Especially Jaime, who managed countless efforts). However, the goals did not come as the Biz keeper denied all the shots.

Team Law was visibly fatigued from the rough gameplay and defended well throughout the 2nd half. Unfortunately, this was not enough to prevent 2 more goals to be scored by Biz. The final score was 5-2 to Team Biz. Team Law played well, but the shortage of players (Biz had probably 1.5x the number of players to rotate with) clearly hurt the team as fatigue set in after a good and energetic first half. Despite the loss, the girls showed great determination throughout the match to put up a good fight.

Note: There is no 3rd/4th Match Report because Team SDE did not show up for the match. Hence Law finished 3rd.