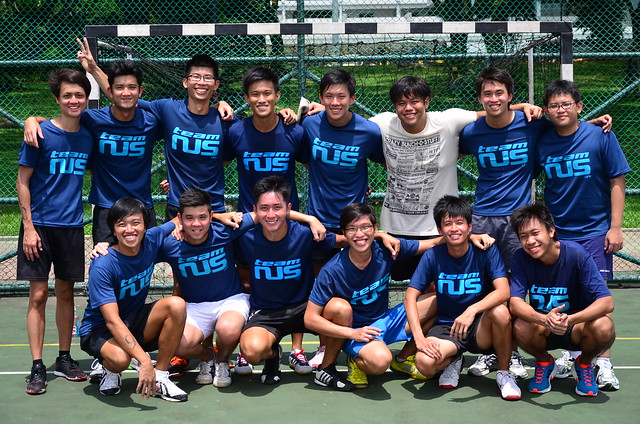 The much anticipated Men’s Handball semi-final match between Law and Business took place at the SRC Handball Courts on the 14th of September 2013. Before we begin the match report, here is the summary on how handball is played.

No way anyone could have guessed that. Source:Wikipedia

After scrolling down and reading the actual rules. Handball is basically a combination of basketball and street soccer. You can dribble or pass the ball as and when you want (basketball) but you can only shoot from outside the boundary of the opponent’s goal (street soccer). The cool part of it is that you can actually jump into the boundary and shoot and the goal is still valid as long as you don’t touch the floor before doing so (Which is actually how most goals are scored in handball.) 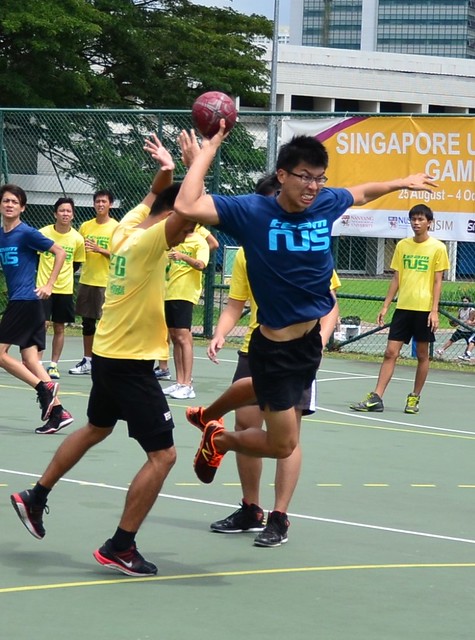 Boon Gan shows how it is done 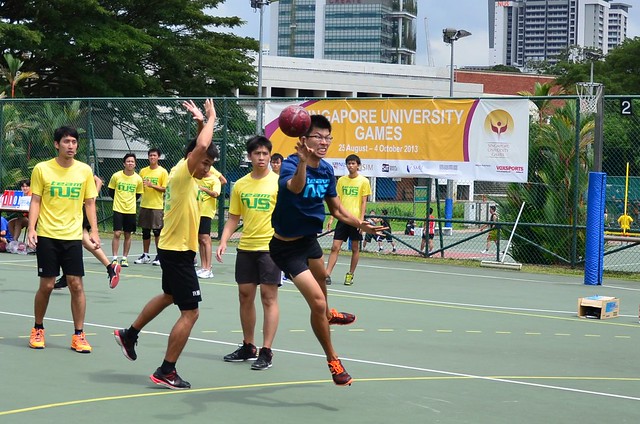 The whistle to start the match was blown at 9:17am, with both sides hungry for the crucial victory to lead them into the finals. However, Team Law showed what they are made of just 1 minute after the whistle when Captain and Handball Superstar Eugene Ong found a gap in the defence and scored the first goal.

Team Law dominated possession and continued to threaten Team Biz’s goal. Within 5 minutes into the game Team Law was already leading 3-0. With goals from Eugene and Hao Ran.

Team Biz managed to pull one goal back before Eng Hao (Otherwise known as Lance Cheow) made a quick counterattack on the right and unleashed an unstoppable shot from the centre to make the score 4-1. 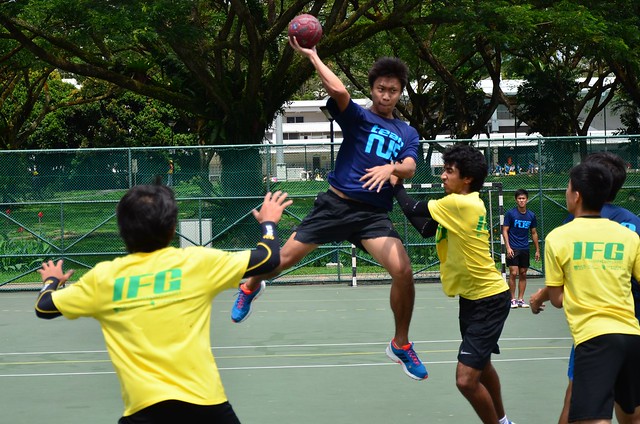 One of Lance Cheow’s many attempts on goal 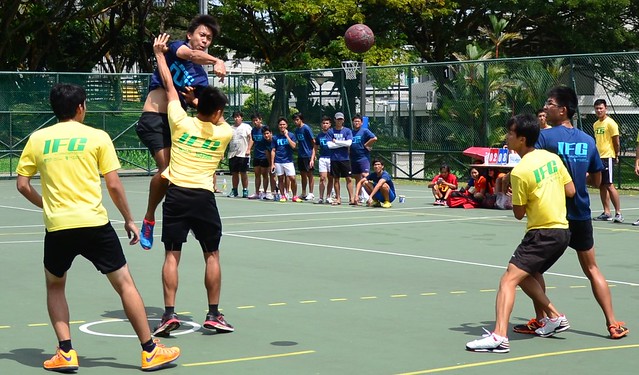 Team Biz continued to attack, but Team Law’s keeper (Timon) wouldn’t budge, several good saves were made by this young man. Notably a shot which Biz had at point blank range which made him stretch a full arm to keep the ball out from the top corner. Well saved!

By halftime, the score was 5-2. Law was in the lead, and rightfully so. (5th goal by Butler) 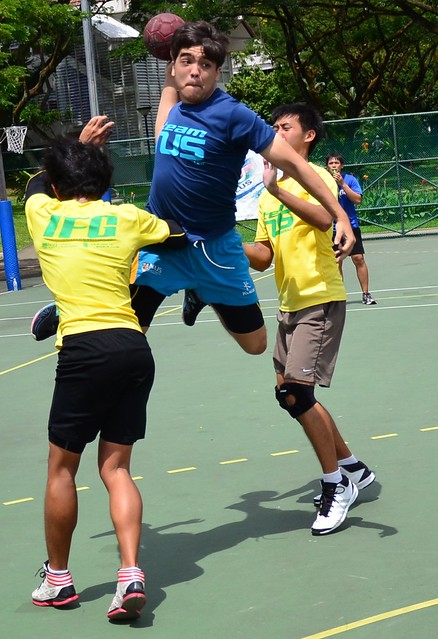 The second half started soon after and Law once again scored an early goal when Hao Ran faked the keeper into diving the wrong way. The goalkeeper tried to keep the ball out by making a turn but too late, the ball was already in the net. 6-2 to Law!

Team Biz managed to score their final goal of the match when a penalty was awarded for a defensive foul on one of their player. However, this consolation goal was shortlived when Team Law scored another easy goal from the wing (Eng Hao).

The highlight of the match came from Eugene, Team Biz had a good opportunity to catch up, but a misplay led to the ball landing in the hands of Eugene, who single-handedly ran the full court distance to the Biz’s goal boundary. The Biz defenders tried to stop him, but to no avail when he made a 360degree jumpshot into the bottom corner of the goal. Team Biz couldn’t believe it, even the Biz girls on the other side were astounded by the sheer amount of skill displayed by Eugene.

The pace of the game slowed down significantly after that, with a 5 goal advantage (8-3 at that time). Law decided to play it slow and safe and played more defensively, only taking opportunities to score on the counter-attack. See Tow made it look easy when he fired a long range shot into the bottom corner of the goal to extend the lead to 6 goals.

Team Law continued to threaten even after, with a barrage of shots on goal. The Biz keeper was visibly unimpressed by the sheer number of shots coming at him but he managed to keep out most of them.

The final goal of the match came from Hao Ran, who scored his 3rd goal of the game from the centre of the boundary after finding a gap in Biz’s defence. Biz tried to fight back, with many last ditch efforts to score, but their shots were either easily saved by Timon or off target. The full time whistle was blown soon after, and Law will be going into the Finals against Handball powerhouses Engineering, who beat Team Medicine in their own semi-finals.

The finals were not going to be easy. A short talk with a few of the Law players showed that Engine were a force not be reckoned with. The match started shortly after 11am, the weather was good considering it was pretty cloudy and not too hot. 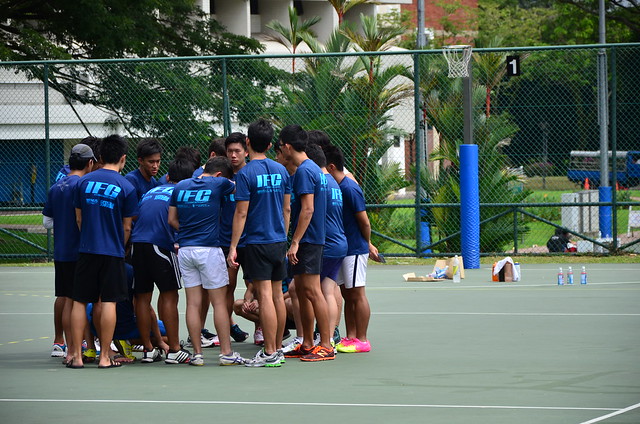 Team Law started off strong, scoring the first goal just seconds after the whistle. Hao Ran managed to find a find a gap in the Engine defence and a good run and jumpshot led to Law having an early advantage.

Team Engine responded well, scoring 8 goals (inclusive of 1 penalty) within 14 minutes into the match soon after. Team Law were trailing by 7 goals, but the players never gave up. Team Law scored their 2nd goal with a good turnaround shot by Yi Zhang.

Unfortunately, another penalty awarded to Engine made it 9-2 before the half time whistle was blown.

The 2nd half started off slow, with both sides taking their time to exchange passes and finding gaps in the defence. Team Law was once again the 1st to score after the break when Yi Zhang capitalised on  a good block by Timon which led to a swift counterattack and goal.

Team Law continued to pressure Team Engine, and were duly awarded with 2 goals by Eugene. A good 1-2 play with Eng Hao and a solo right run led to Law catching up (10-5 to Engine). Eng Hao himself managed to score a goal after a good counterattack opportunity came by but it was too late. The final whistle was blown. Engine won the finals 12-6. But Law certainly showed a positive attitude throughout the game (Especially in the second half which we managed to outscore Engine 5-3). 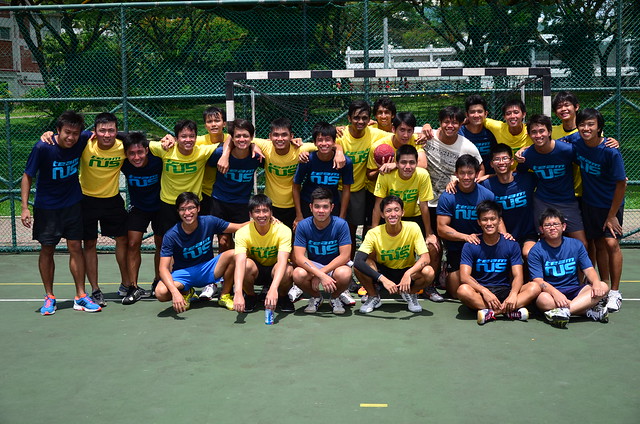