Inspired leadership both on-court (from Monika and Melanie) and off it (from captain Charmaine) as well as some hard and accurate hitting by the girls saw Team Law achieve its best ever result in women’s Volleyball for the annual IFG.

The girls were placed in Group A comprising against seeded sides from FASS and Business. USP and SOC made up the rest of the group.

All matches are played to the best of three games with each set played to 15 points. 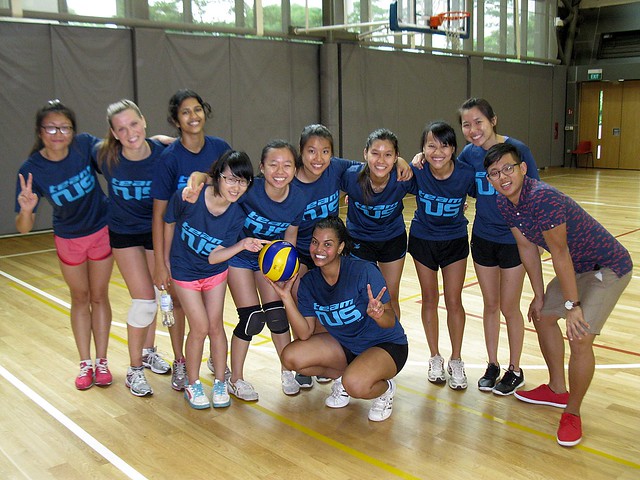 With both teams admittedly jittery given that this was the first match of the tournament for both, it was a scrappy fight as the advantage swayed to and fro in the first set. SOC took the first set before the girls rallied (through their awesomely catchy morale-boosting cheer on court) to take the next two sets and with that, their first win of the campaign against what was a strong SOC side. 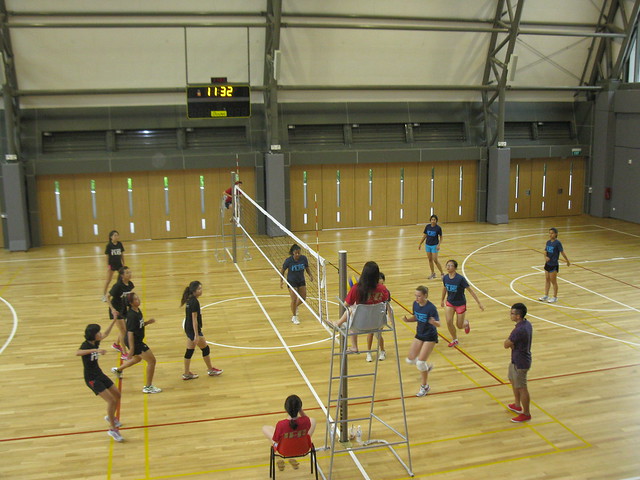 The girls in action against Computing

Law beat USP relatively comfortably to record two wins out of two to temporarily top their group. Crucial to Law’s victory was the dominant passage of play in the first set which saw Law come from 0-3 down to lead 10-3 before handing serve back to USP. The second set was a much tighter affair but cooler heads prevailed in the end to send USP to the bottom of Group A. 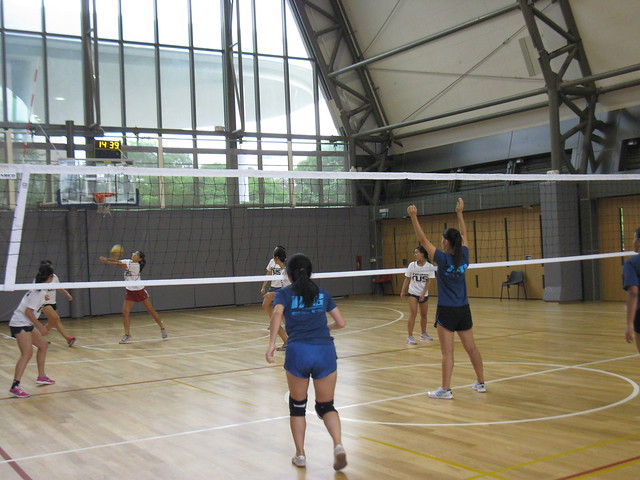 Team Law needed to win against one of the two seeded teams in order to create an NUS-wide upset by reaching the semis and the nerves were visible in the first set as the girls met their match against a much more experienced (and taller) FASS side (we have some wonderful players — but we certainly did not have a team comprised of ex-school team players). Unforced errors cost the girls dearly in the first set as FASS simply (annoyingly, from a supporter’s POV) did not make as many mistakes as us. 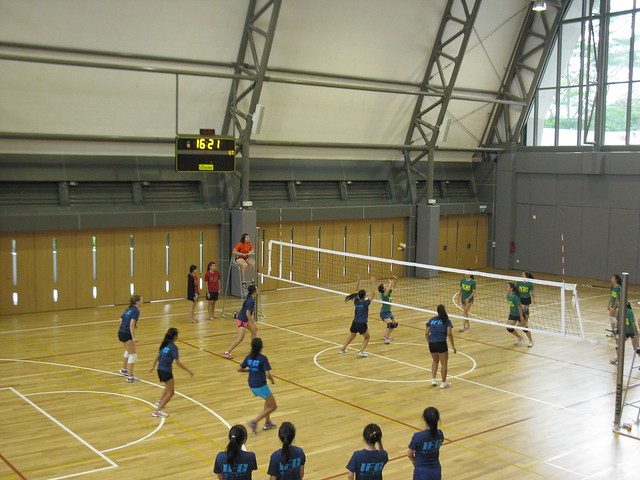 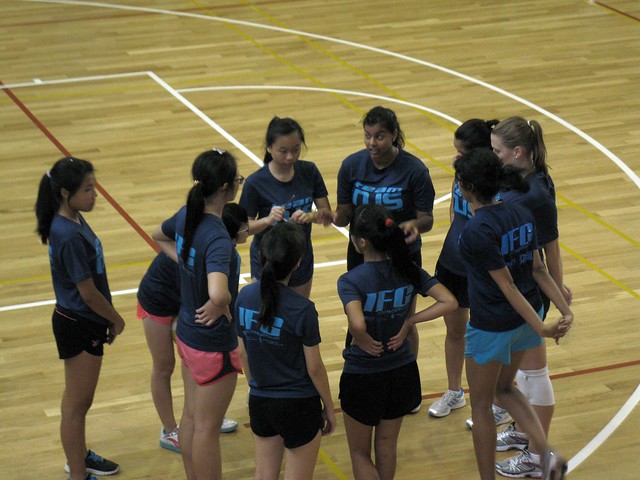 Melanie rallying the rest of the team after the first set

The spectators certainly thought that the second set would be a case of “same-old, same-old” with both teams unchanged but boy, did our girls put up a hell of a fight to make their opponents look oh-so ordinary. Law was, at one point, 7-1 up in the second set before a time-out was called and FASS was forced (or did I sense some genuine panic at that point in time) to substitute in some of their better players in an attempt to stop the rot. The change worked wonders though and the scores were eventually tied at 13-all as our girls made their opponents work for every single point in what was a thrilling set for both supporters and neutrals alike. At 13-all, we lost the serve though and Arts scored the last point they needed to win with a spike which landed right in the corner of the court.

There was no shame in losing to a seeded team by such a tight margin and this was epitomised by the post-match reactions from both teams. While our girls commended themselves on a job well done, their opponents huddled together and were in the midst of what seemed to be a very serious and sombre AAR. 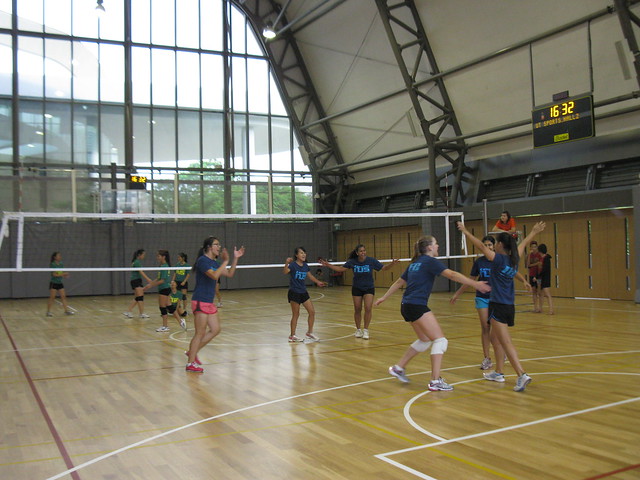 Business maintained their 100% record in Group A with a comprehensive win against Law. With our Men’s Volleyball players (having completed their fixtures) cheering the team on in what was the last match of the day in Hall 2, the girls could not find the spark they needed to impose themselves against an extremely agile and powerful business side (readers should have seen Biz’s own exchange student in action — your correspondent certainly feels that her spikes will not be out of place in the men’s competition next door). The aforementioned exchange student was swapped out for the second set but despite Team Law getting the first two points of that set, their opponents went through the gears and emerged as comfortable winners in the end. 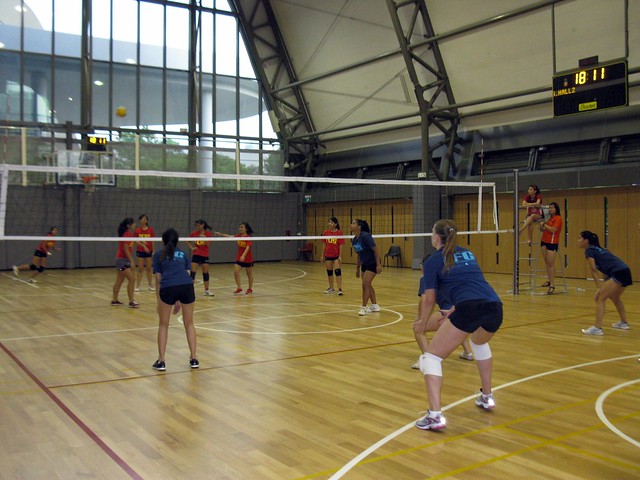 It’s always going to be an uphill task against the tournament favourites, but kudos to Team Law for trying their best!

Some thoughts from our exchange players —

Melanie Thomas: “It was a great weekend working up a sweat, cheering on my team and feeling a part of the NUS community”

Monika Drobnicki: “As an exchange student, playing on the NUS Law volleyball team in the inter-faculty games provided me a great opportunity to get to know other students and be part of a community.  Both trainings and the tournament were fun and well-organized. I would recommend participating to anyone!”

Team Law captain Charmaine Lim: “The girls didn’t manage to get to the semifinals, but we did a really good job today – we communicated on court, we fought hard for every ball, and we played together as a team.” 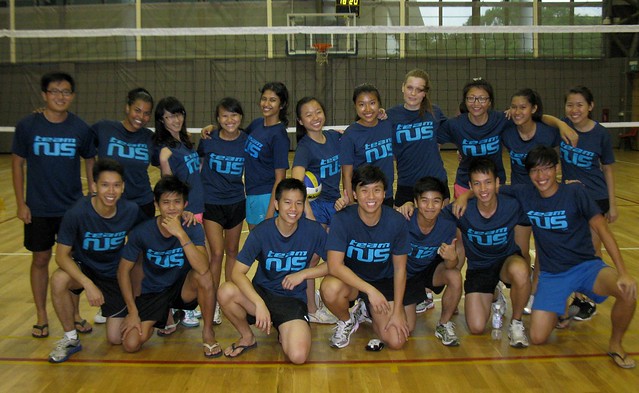 “I think we managed to achieve quite a lot given the number of training sessions we had, and I’m really proud of the team. I’d like to thank the girls for giving their all during the matches, and also Kelvin and Kong, for helping the girls during the training sessions. I would also like to thank the team managers (Jun Jie and Parveen) for bringing us energy food, and providing us with the moral support along the touchlines during the matches!” 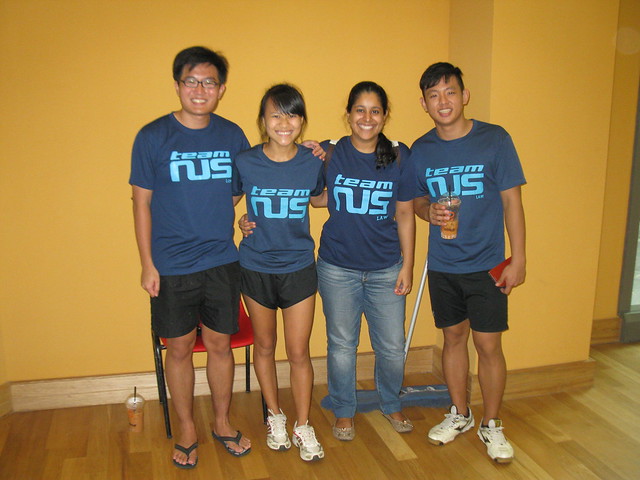 “We (the Men’s and the Women’s team) are planning to play regularly even though IFG’s already over. Norman from the Men’s team is helping to organise this weekly session! We’re looking at playing every Friday afternoon at the CCAB indoor courts for now. We welcome you to join us! (:”