7 AM, Dawn — All is quiet and still at Kent Ridge MRT Station. The shuttle buses had not even started operating (any sane student would still be in bed enjoying his timely respite from the hectic school week).

The various teams for the 2013 IFG Road Relay were up and on the move. Runners in varying shades of the IFG shirts started congregating at NUS Utown for the climatic showdown.

As the sun rose and illuminated the grey walls of the Utown building, different members of the Law Road Relay Team started streaming in to our meeting place. Our team was a diverse one indeed, with team members hailing from every single year (and even a Part A student) from law school. For some of us this was the first time seeing each other, our team having not trained together before owing to our hectic schedules and commitments. However, we all felt that we had what it took to do law school proud, having already sweated it out for the IFG Road Relay try-outs.

For the uninitiated, IFG Road Relay in Law School is a prestigious sport — an event that fields a small and select team of 10 to enter the competition. The trials are arduous; each runner has to take part in a strenuous 1.6 Km run/dash and only the runners with the best timings are chosen to represent the school. Just how many of us law students can safely attest to be able to run IPPT/ NAPFA in timings that would qualify for Gold? I suppose very few of us indeed.

The IFG Relay race route took us around the Utown compound. It is a challenging route that has undulating terrain with many slopes and ascending and descending stairs abound. All in all, each runner has to canvass 1.6 Km in the shortest time possible, and the team with the fastest collective timing would emerge the champion. Each team is required to field 3 guys and 3 girls. There was, however, a significant change to the race rules this year round: no team was to allow any runner to run the route twice. Perhaps the reader might find this particular ruling odd since most people would find it disadvantageous to field the same runner twice. However, it could be possible that the race organisers has been pressured to institute this new ruling as a result of Law School’s impressive sweeping of the IFG Road Relay Title last year. That year, our very own Qua Bi Qi stunned guys and girls alike by running in the first leg (and finishing 3rd/4th in a leg full of other guy competitors) and running yet again as the last runner, effectively clinching the title for Law School. Whatever the real reason for the change in ruling, it did not matter this time round since we came more than prepared with the main team of 6, as well as 2 guy and 2 girl reserve runners.

Our team was practically itching to get up and running. Running superstars Too Fangyi and Ng Boon Gan took the initiative to get the rest of the team, main runner or reserve, doing their warm up exercises. True to their army officer training, both of them had already scouted out the route earlier on their own and were thus leading the rest of the team to get familiarised with which areas to speed up and slow down at. It was all pretty heart-warming to see fellow law schoolmates helping and encouraging each other with the team mates swapping tips and allaying each other’s fears and concerns. With such camaraderie and team spirit, we felt that we were more than ready to run this race to the finish.

The organising committee, on the other hand, was woefully ill-prepared. For all our efforts preparing and doing warm-ups, alas they were thwarted by the ill-timing of the Kent Ridge Safety Ambulance to decide to get lost in NUS Kent Ridge — the very campus they were supposed to provide safety coverage for, and the organising committee’s inability to direct them to the race area. This blunder delayed the flag-off of the race by approximately 15 minutes and things did not look good as the sun started to get hotter and brighter. However, our team took this all well in our stride (literally) as we continued to encourage each other and keep our spirits up. 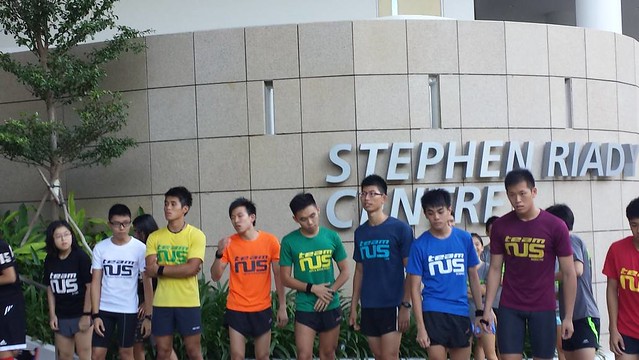 While all other faculties’ runners are looking anxious/ nervous, our first runner Boon Gan stares calmly forwards with confidence!

Eventually, the race was flagged-off and we were off to a decent start. By the end of the first leg we were pacing well at 4th place just after Medicine, FASS and USP thanks to our trusty, self-described ‘old horse’ Ng Boon Gan. Note: he still managed to overtake younger runners and to our utter astonishment, he told us he was actually feeling woozy and sick the day before! Our team had earlier decided to line our guy runners as the 1st, 2nd and last runners while our trusty girls take 3rd, 4th and 5th positions. This was a potentially risky move but we hoped that by starting off with a good lead, we may be able to maintain our head-start before finishing well with our fastest runner.

This approach seemed to be paying off as our second runner, the nimble and swift Hijazi, managed to give us a clear 2 minutes lead over all the other faculties (who had decided to field girl runners in for the 2nd leg). Our girl runners performed formidably as well, with Nicole, Joy and Karen tenaciously holding the line and holding their own even against guy runners from other faculties. It was a tough fight, with much shouting and cheering from the excited spectators.

Meanwhile, the reserves were keeping themselves busy by being the “supporting crew” to our runners. Team Manager Jiashun as well as Captain Qua Bi Qi and Charlene took charge of preparing all the runners as well as providing those who just finished their legs with much-needed 100 Plus (courtesy of the NUS Law Club). Moreover, we were the only faculty to have a “look-out” system in place where one of us would stand ahead and signal to the Team Manager whenever one of our runners was coming in, hence allowing the Team Manager to have some time to mentally prepare our next runner for his turn. These behind-the-scenes efforts of our team members invariably helped us to shave precious seconds off our changing-over process and really made a huge positive impact on the morale of our team.

At last, the 5th leg runners handed the race over to the final-leg runners. At this point of time, Law was at 4th place (still behind medicine, FASS as well as USP). Despite all odds, our dear commando Too Fangyi gave the other faculties a run for their money — beating both FASS and USP during his epic 200m sprint/ trot back to the finish line. It was rather unfortunate though that Fangyi was too ‘hardcore’ till he tripped over himself and grazed his knees after crossing the finishing line. The medical team responded and attended to Fangyi and, upon closer inspection, decided that Fangyi was too hot and had to be sprinkled and cooled-down with water immediately — much to his embarrassment. 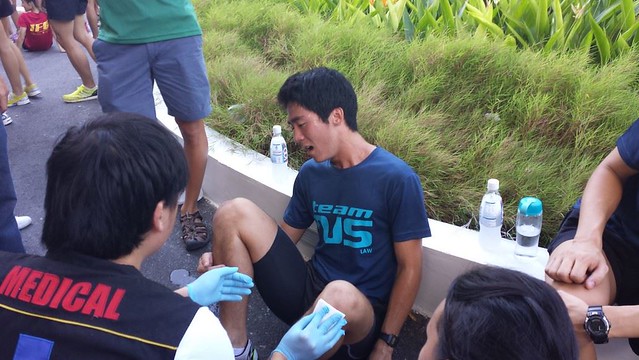 Fangyi, having just sprinted past 2 guys to help Law clinch the runners-up position, gets treated by paramedics after cutting himself from a fall.

Amidst much laughter and good cheer, Law School has emerged Runners-up for IFG Road Relay 2013. We ran the good race and we fought the good fight. Our winning of another medal in this event has effectively cemented us as a force to be reckoned with in running. Although we lost our title to medicine (which arguably should run faster since their guys are younger since they disrupt their NS — just saying), I believe every member of the Road Relay Team went back a champion. The time spent together as a team, though short, was invaluable as we managed to encourage each other bountifully during this event. Against all odds, the (relatively) small faculty of Law has again managed to show the rest of NUS that a little courage, fortitude and determination really goes a long way! 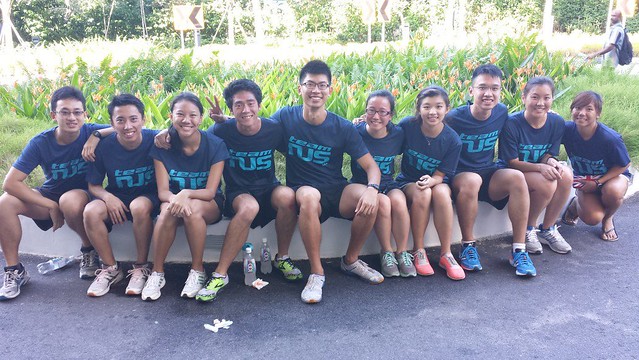