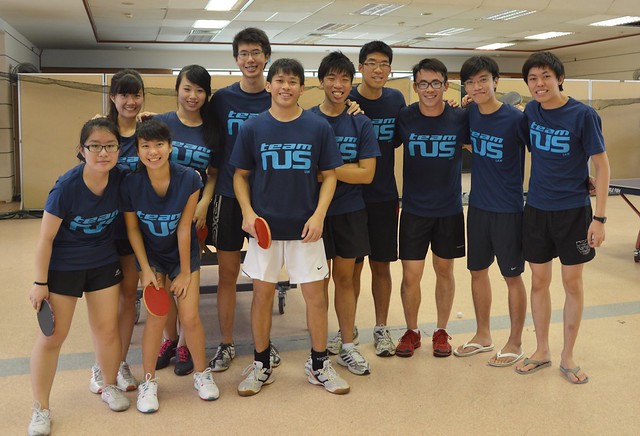 It was a testy semi-final as Law and Business raced to three games out of five. With Law being the dark horse in the draw, the players had to give it their all to make table tennis history. In addition to being dressed for success in their signature navy blue Team Law jerseys, the team immersed themselves in the table tennis arena as the usually eloquent English-speaking players were seen hollering in a rather odd mixture of Mandarin and vocal noises, and supporting team members were exclaiming Chinese expressions of encouragement.

Business won the Girls’ singles and doubles despite the resistance of Jessica Mau, Cheryl Lau and Ashley Loh, while captain Benjamin Teo caught up for Law with his usual brilliance in the Men’s Singles. Law had to win the fourth match to level the playing field, and it fell to Koo Zheng Xuan and Chua Yong Quan in the Men’s Doubles to bring that hope of reaching the finals a step closer to realization. 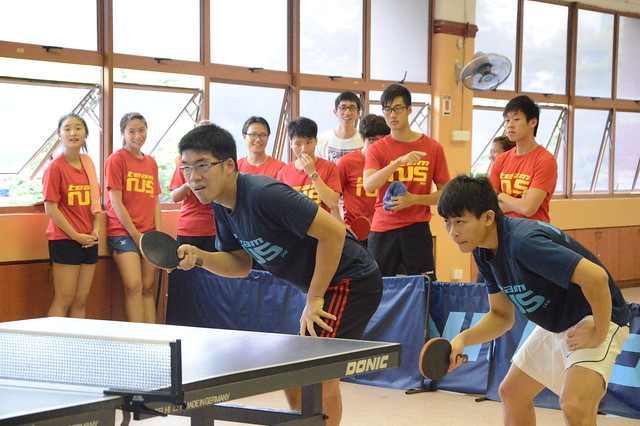 The 1st game was decided in favour of Law after three consecutive deuces which raised the intensity of atmosphere. It was an evenly-contested match with both sides looking to make winners and force errors out of one another.

Business started off the 2nd game with much ferocity and Law struggled to keep them at bay. Zheng Xuan and Yong Quan both pulled off shots with finesse and strategic placing that prevented Business from pulling ahead. With the game tied at 8-8 it was clear that Business had lost their initial ferocity and Law started to gain momentum, eventually winning the set. 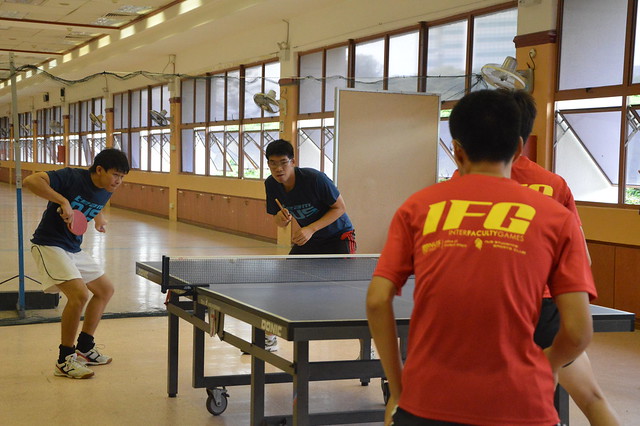 Team Law putting up a good fight against Business

However the momentum was lost during the 3rd game when Business refocused their concentration allowing them to win the game marginally. Zheng Xuan and Yong Quan were simply unfazed and they played the 4th game with much more intensity and focus, pulling off stellar shots and forcing errors from their opponents. They eventually won the match, with a scoreline of 3-1. The finals were in reach.

Law had to win the fifth game to reach the finals. The task was entrusted to Yik Xin Ying and Mark Hee’s trusty (and buff) shoulders. Mark Hee did not disappoint as he ripped Business apart in the 1st game with a brilliant mixture of finesse and pure unadulterated power, pulling off spectacular winners which Business had no answer to. 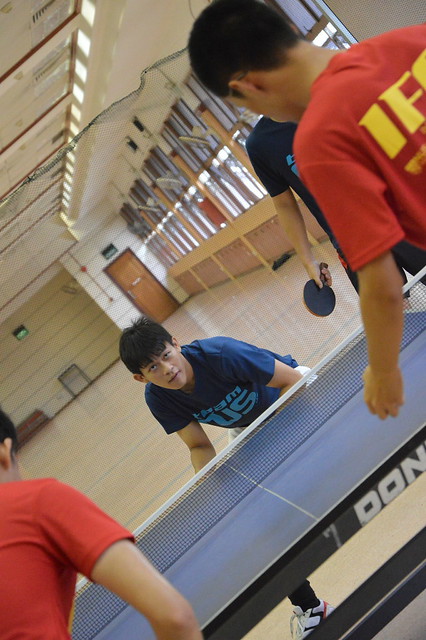 Yong Quan with such focus!

Business quickly recovered from the setback and maintained their nerves in the 2nd game. Despite Xin Ying’s consistent resolute defence, Business managed to defend strongly and eventually won the game.

The 3rd game was a fiercely contested one which was decided after four nerve-gripping deuces. Business remained resolute to Mark and Xin Ying’s offense and played with tactical nous, forcing errors and evened the trailing scoreline. The opponent’s efforts were ultimately futile as Law regained their nerves and won the game. 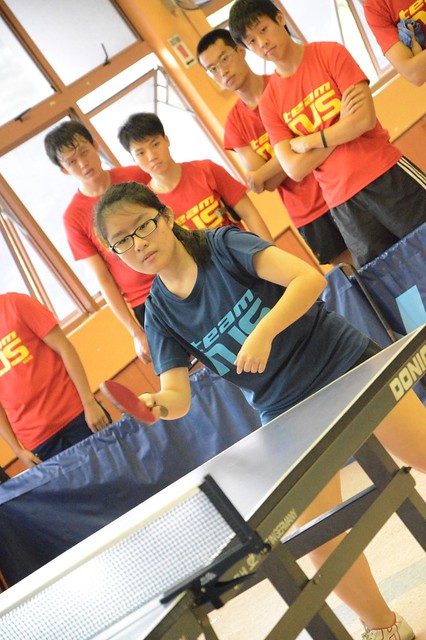 Look at Brenda’s concentration and composure!

Law and Business were fairly even in the 4th set as Business started to gain momentum. There was an amusing exchange of words with the score at 10-9, when both guys from each team professed their feelings of nervousness and fear towards each other.

Despite the drama, the game was eventually decided in favour of Business.

With the score tied at 2-2, the 5th and final set would decide who would face Medicine in the finals. Despite Mark and Xin Ying’s valiant efforts, Business were unyielding in their shots and won the match 3-2, much to the disappointment of the Law team.

Nonetheless it was still an amazing effort by Law, forcing the Business players to fight for and earn every single point. Moreover, there was still 3rd place to be won.

Law won the Men Doubles and Mixed Doubles over FASS with the scores at 3-2 and 3-1 respectively. With FASS winning the Female categories, it was up to team captain Ben Teo to win the Men Singles, against a particularly uncompromising opponent. 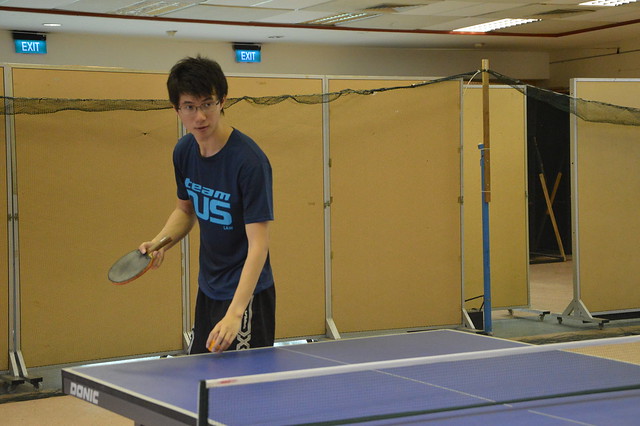 Ben adopted the offensive with his ferocious and lightning fast shots and won the 1st game coolly, unperturbed by his opponent’s defensive style of play. The opponent continued his style of play in the 2nd game, languidly moving around the table and countering Ben’s shots. Ben adapted well to his opponent’s change in tactics, but it was too little too late as his opponent quickly clinched the game.

The 3rd and 4th game was an evenly contested match as FASS’s player continued his defensive tactics throughout, much to the disgruntlement of Ben and the rest of team Law. With the score tied at 2-2, the 5th game was to decide Law’s placing in IFG Table Tennis. 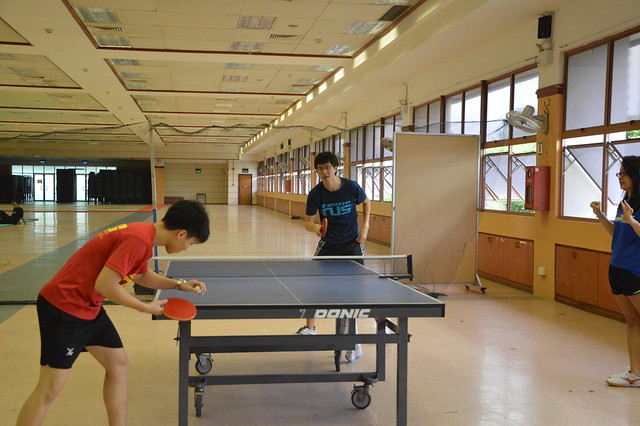 To the surprise of many it was not as tightly contested as expected. Ben pulled out all stops and was exceptionally brutal. His opponent struggled to employ his usual defensive tactics and was forced to uncomfortable positions. Ben however was in no mood for mercy and tore his opponent apart with shots imbibed with venom and meaning. FASS stood no chance and Ben won the game at 11-2, winning the match 3-2. The team members jumped and cheered in ecstasy as they were officially 2nd runner-ups!

Team Law has not only made history by clinching Law’s first ever medal in this sport, but its team members also forged new friendships through the highs and lows of the competition. The team members’ grasp of the Chinese language has also improved tremendously from the ingrained verbiage of table tennis strokes and expressions. The team would like to thank the masses of people who were there supporting them (in spirit), as well as their passionate and visionary team manager, Clarence Tan.

Team captain Benjamin Teo: “I think that our team did well to clinch the 3rd position today. We rallied together against all odds to achieve the best result in 3 years, and I’m very proud of the team and the efforts that they put in to make this year’s table tennis IFG a memorable one.”