Despite the hazy weather conditions, IFG Road Relay 2015 still took place today (Saturday, 12 September) as our 8 representatives from Team Law as well as runners from the other NUS faculties and Yale-NUS College gathered (very, very) early in the morning (HAHA when I say “early”, it is really early — 7am) at NUS Utown.

Just some brief information on IFG Road Relay! Some of us (including myself) would think that Road Relay is somewhat like Track and Field where runners will run about 400m around the track during Sports Day. But in fact, for this IFG Road Relay, the running route consists of a 1.8km route (a rather long distance!) around NUS Utown that is covered 6 times by 3 males and 3 females from each faculty. As with all relays, the team with the fastest overall timing wins.

Here are some shots of our “fast and furious” Team Law! 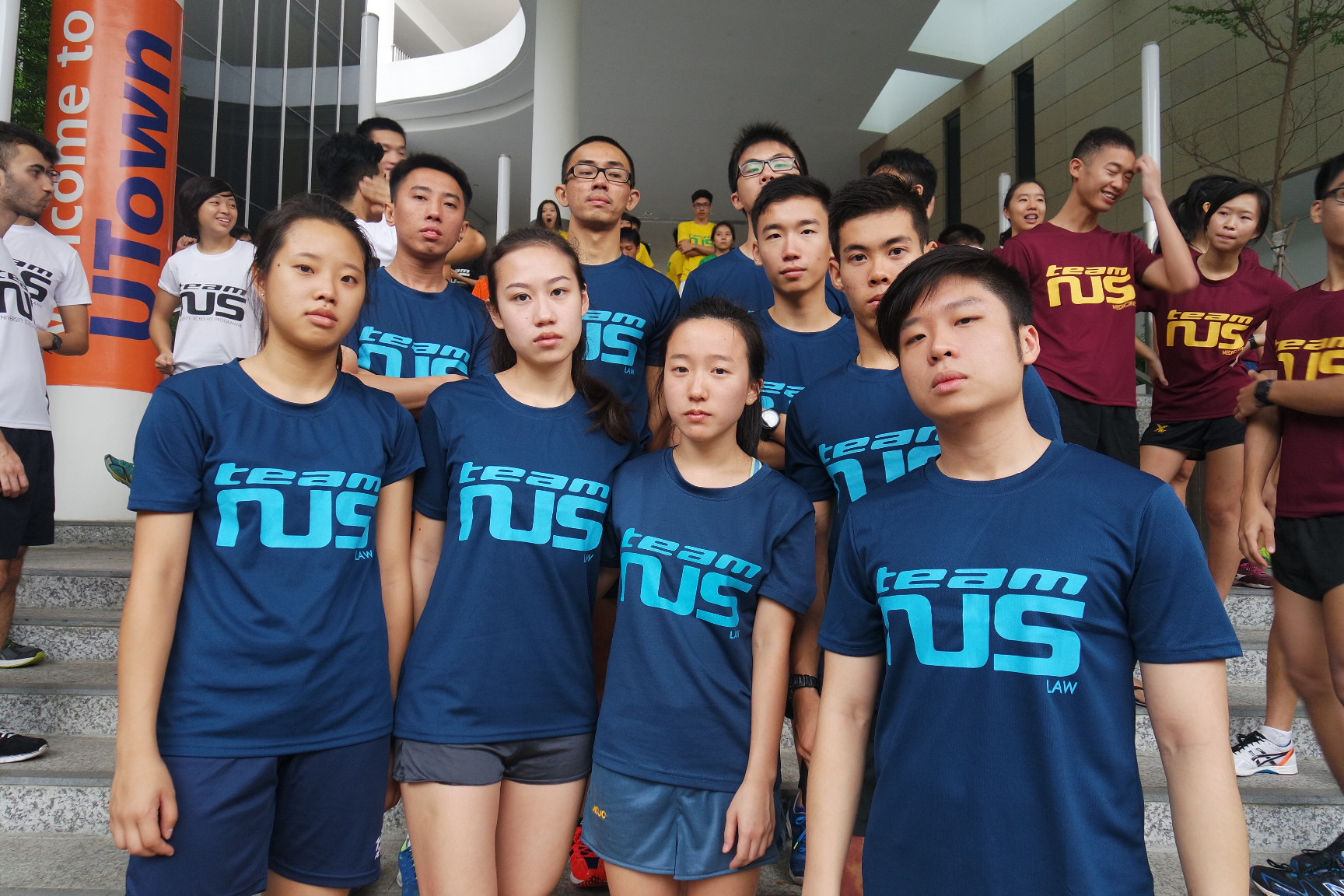 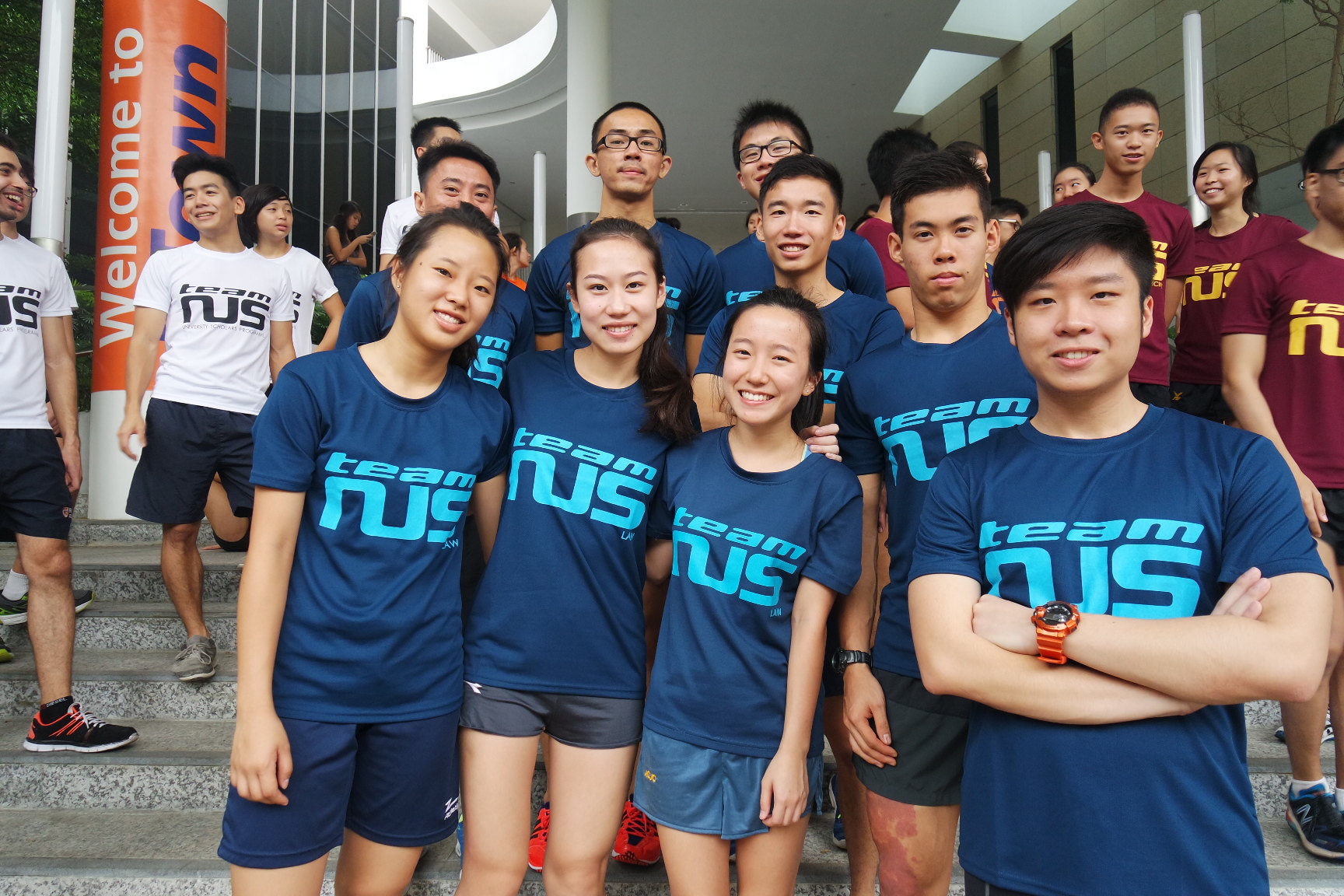 The calm and smiley shot!

And regarding the route for the road relay, as shown in the image below, runners have to run round the circumference of U-town. Whilst 1.8km may not sound very long, it is in fact really really tough sprinting this entire 1.8km! And indeed, our runners have been training and preparing hard for this sprint! 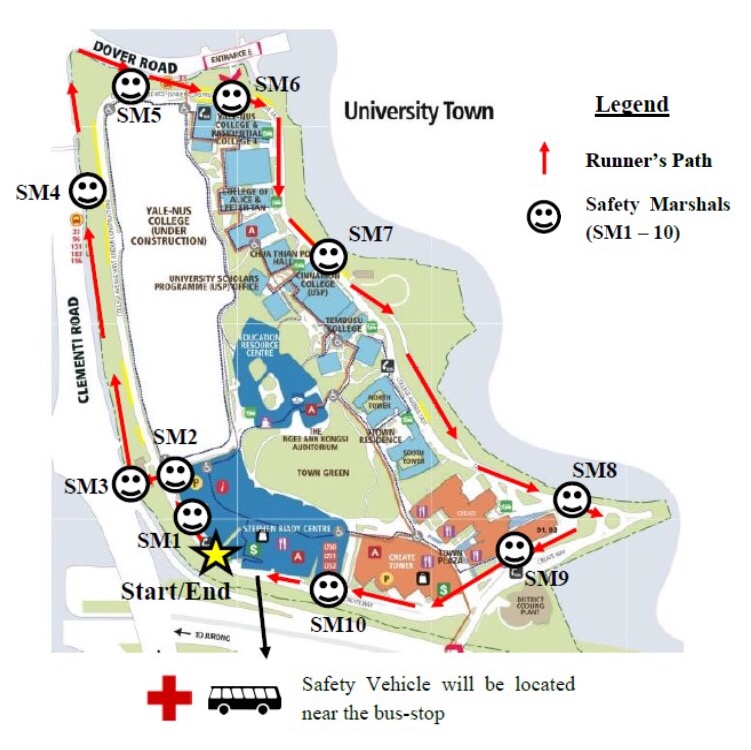 Route for the road relay!

According to the team captain Jian Yang, who is also the newly elected Sport Director for Law Club, the team had been training regularly at CCAB, usually completing interval trainings of various lengths (400m and/or 800m) as well as long distance runs. Occasionally, the team also runs at other locations such as the scenic Southern Ridges. Sometimes, the team even does high intensity sprint sets of 16 x 80 meter sprints, and not forgetting, static training!!

One really interesting fact about this team is that none of the members actually have running background – but nonetheless this doesn’t hamper the team! Upon training hard and preparing for the competition (training 3 times a week 3 weeks leading up to the race, though slightly hampered by the haze), their timings have improved significantly over the past few weeks! Kudos to the team!!(:

JUST BEFORE THE RACE BEGAN, it’s time for the team to boost the morale and encourage one another!! 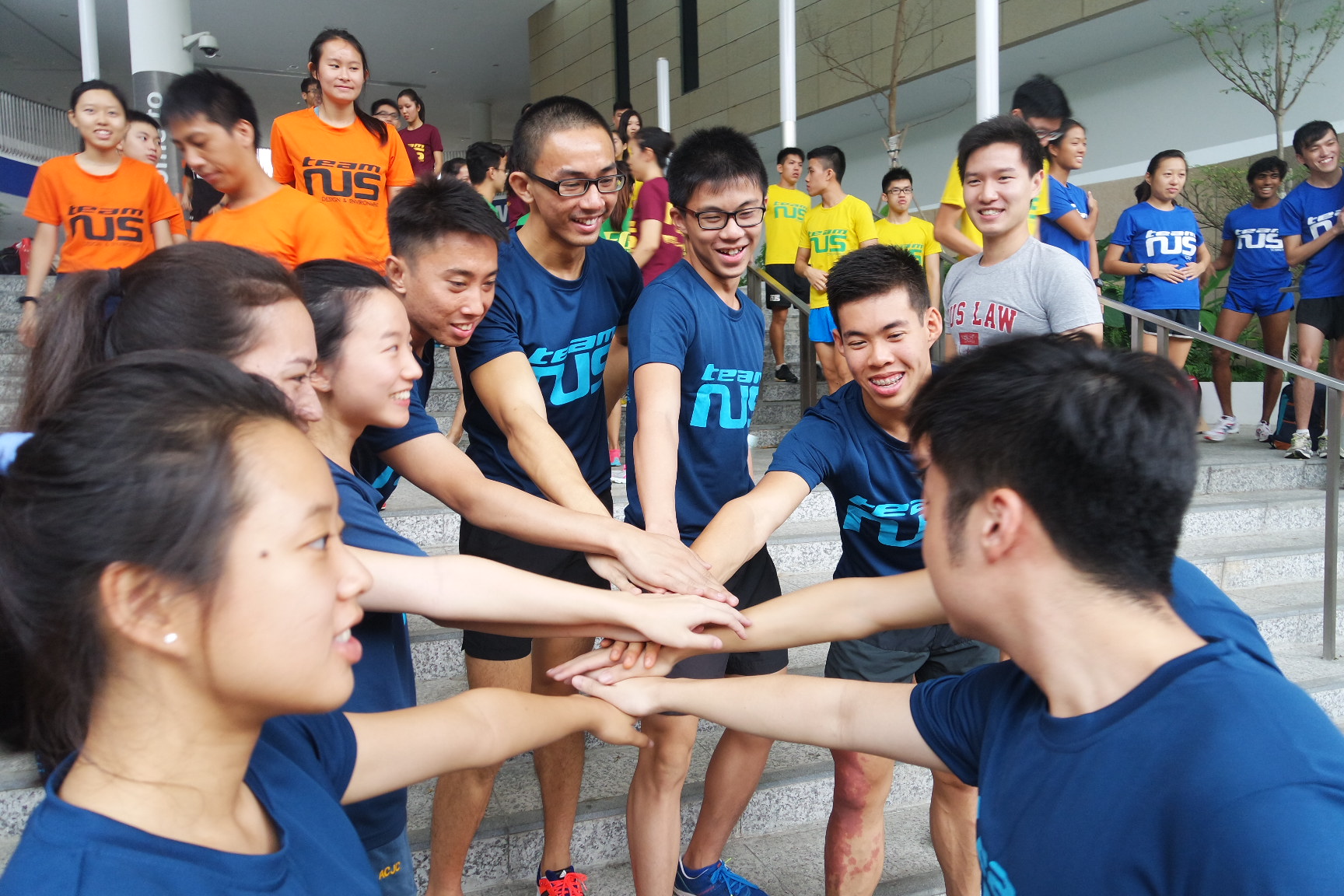 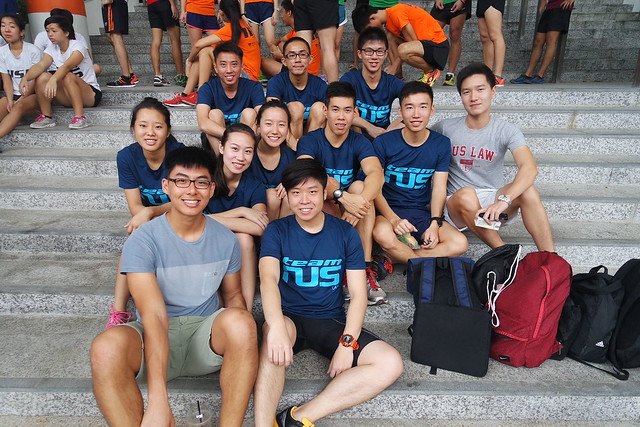 Spot the two supporters who are here to support our friends for the race (they are coincidentally both in grey!). 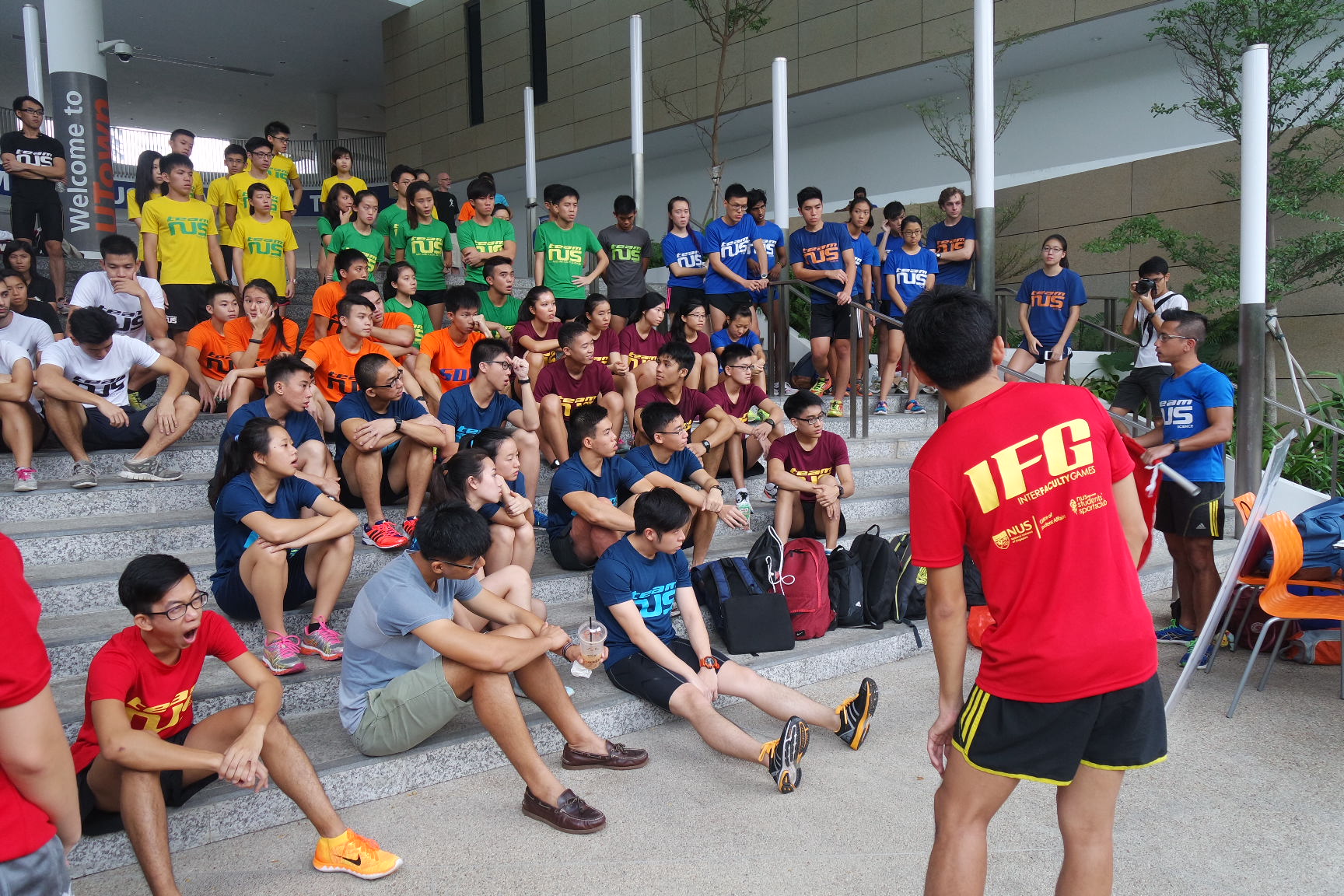 AND THE RACE BEGAN!!! Ah the team must be really anxious right now but nonetheless, nothing beats the confidence that the team actually has. 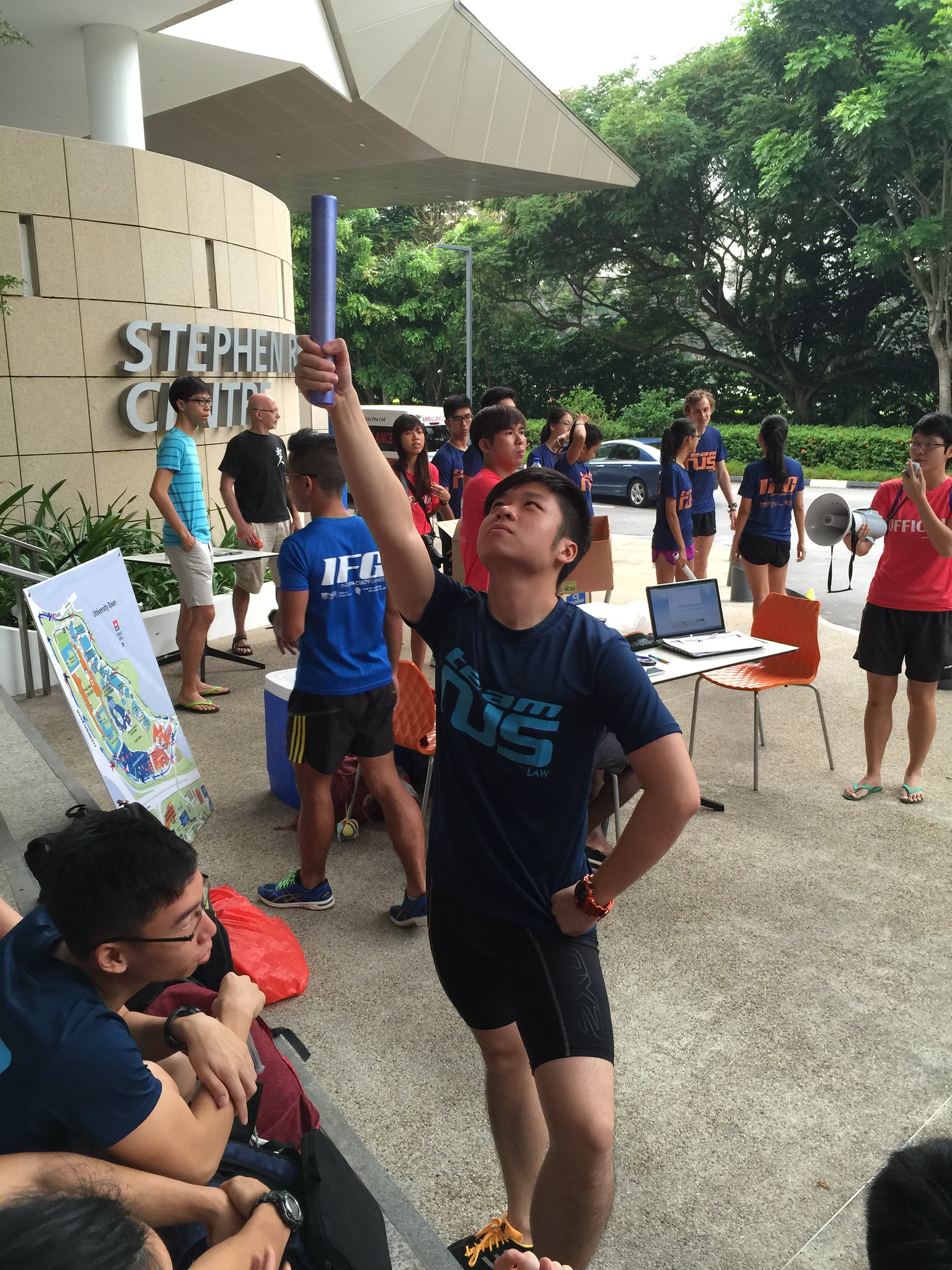 Check out Theodore’s (our 1st runner) confident and composed face with the baton! 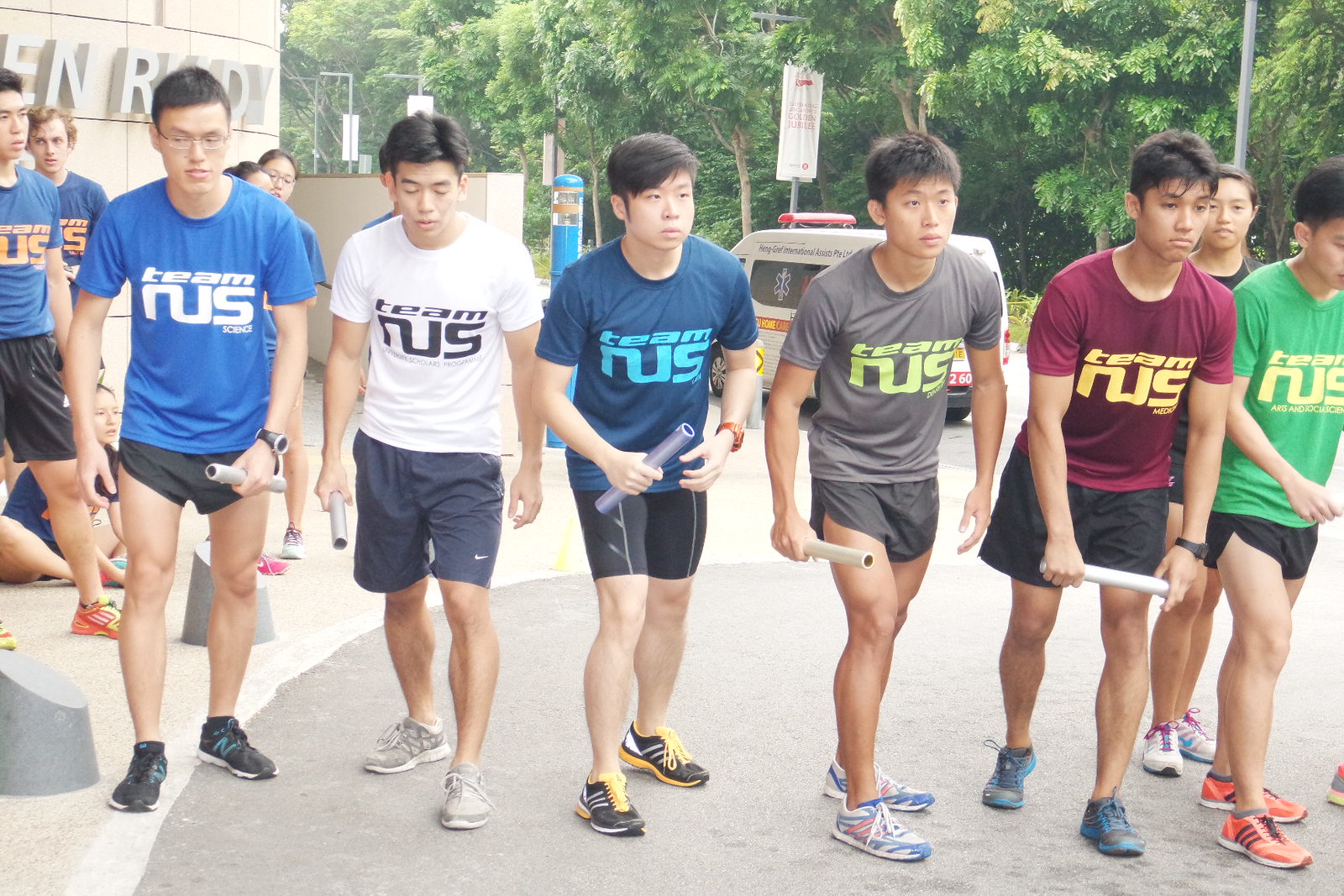 1st Runners from different faculties all ready to start the Road Relay!

Shortly after, the race ended! TEAM LAW CAME IN 8TH PLACE, with the overall timing of 44 minutes and 14 seconds. The estimated individual timings of the runners from our team are as follows:

Though our placing out of the 10 faculties may not be the best, there was significant improvement in the timing clocked by the team as compared to the previous years and the team is really proud and relieved of their performance! (: It was a tough and close fight! Efforts placed into training and preparation really, really paid off!!

And lastly, here are some words from Team Captain Jian Yang:

“The team’s morale was quite low 3 months ago when we knew that could not field our best possible line-up due to unforeseen circumstances. However, we weren’t prepared to give up and trained really hard for this race. I reminded them the night before, “When you’re in pain, so is the guy next to you and the guy ahead of you. It comes down to which runners handle the pain best, and the winner is the one who wants it most.” We fought hard and beat our previous timing by 2 full minutes. It was a good race.”