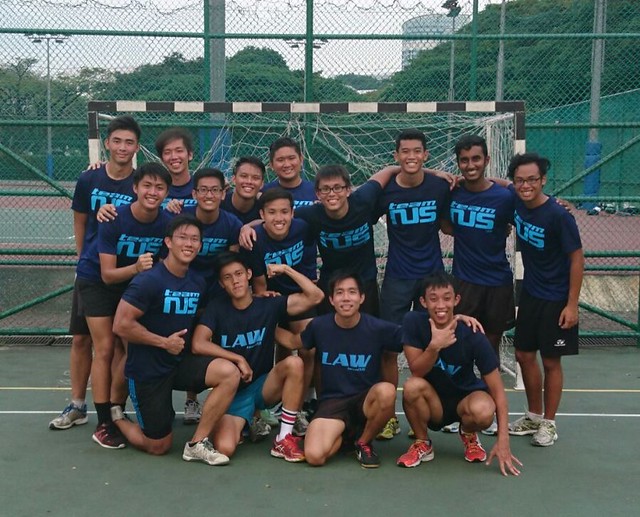 During the preliminary rounds of Inter Faculty Games (IFG) Handball, one law school spectator expressed her disbelief that handball was an actual Olympic sport. She questioned the use of handball glue to help with gameplay, and whilst I tried my best to cover my extreme indignation, I smiled, nodded, and turned my attention back to the war of athletes that was taking place on the court.   Whilst not as popular as basketball, soccer, rugby, tennis or other mainstream sports, handball is very popular in Europe, with professionals taking their talents to organizations like the German and Spanish Handball Leagues.   Handball is physical, it requires great athleticism, tactical awareness and team work. If that’s not a sport, I don’t know what is.   For the Law team, everyone knew that we were going in as underdogs. Powerhouses like Business and Engineering loomed, but we put our head down and went in strong. 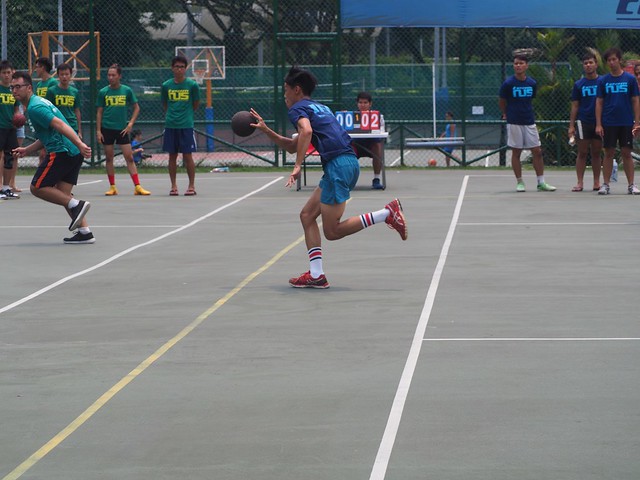 Preliminary Rounds Engineering Going up first against the strong engineering side, we knew it would it be a tough game. The starting squad, made up of veteran players kept it close as they dealt with the length and athleticism of the Engineering side. Goalkeeper Daryl Er astonished the sidelines with amazing acrobatic saves against the powerful throws of the Engineering team. It was a hard fought match, and it showed in the score line, as Engineering was only able to leave with a one-point win, 4-3. Although it was a loss, it kept us confident for the rest of the day, knowing that we could hang with the best. 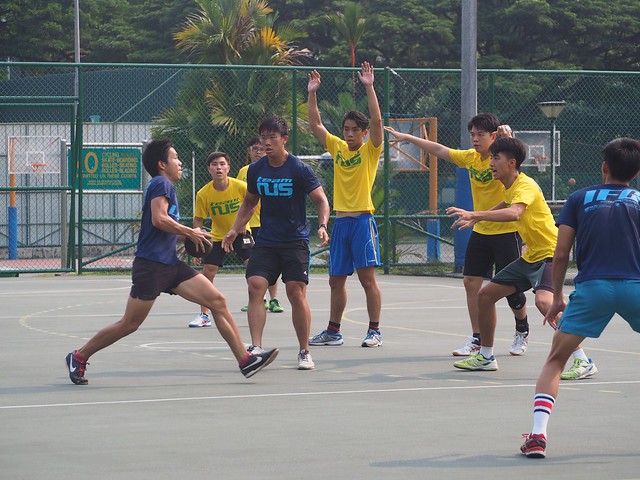 Veteran winger Timothy ‘Quadz of Steel’ Ng charges into the defence for the goal.

Computing   Computing lived up to their namesake and presented two real life firewalls in the center, whose size and strength kept our resident tank Josh Wu fighting hard. Despite the battle inside, our outside players kept attacking, and Josiah Tham played with his trademark raw power and blinding athleticism, converting on multiple shots. Veteran wing player Timothy Ng showed off his agility and grace, shooting from any angle with a number of creative shots.   However, like the immovable pivot players of computing, the score wouldn’t budge, and the game ended in a tie, 9-9. 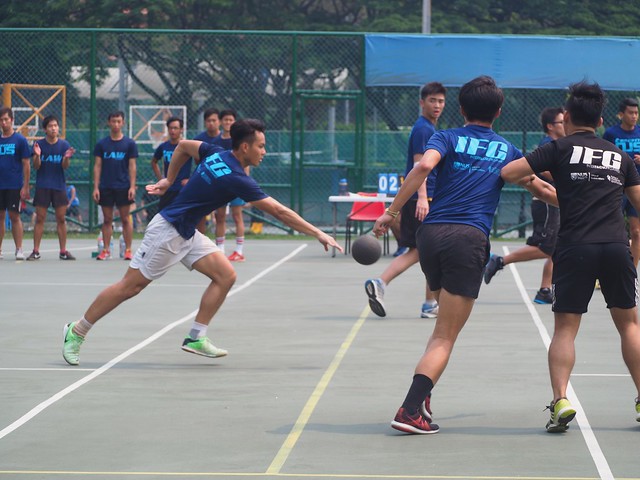 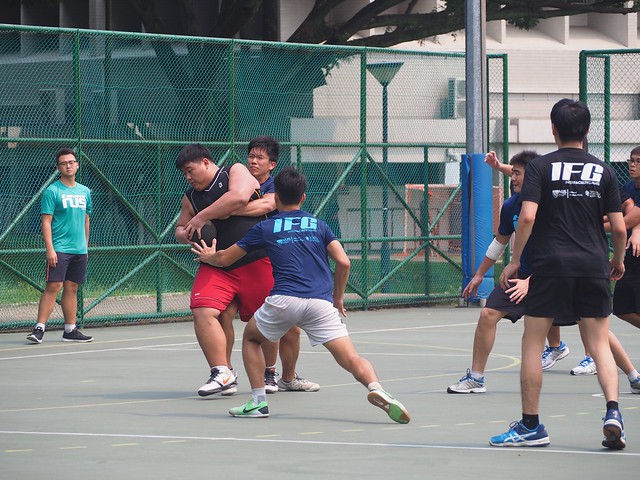 Faculty of Arts and Social Sciences   After a close loss and a draw, the trend seemed to be heading towards a win, and that’s exactly what the team got against FASS. Fueled by a strong inside game from Josh Woo, and bullet like throws from the team beast, Clarence Woon, the team proceeded take a lead which it never lost. Chee Jun An came in to replace Josh and picked up where he left off, providing an intimidating inside presence. The team proceeded to take down FASS and clinch its first win, 9-5. 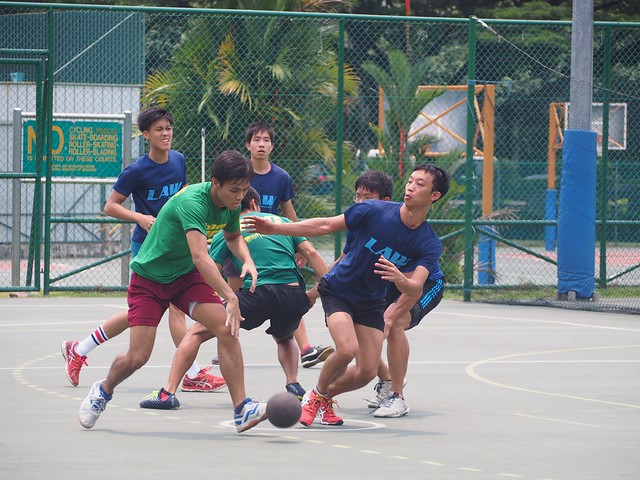 Handball is a physical game, and dentistry definitely knew that, doing their best to harass and shake our players off their game. Unfortunately for them, our seniors know every trick in the book, and played with the composure expected of veteran players. Quick precise passes sliced through the dentistry defence and led to some great goals. Keeper Daryl once again showed everyone why he is the man, with many acrobatic saves. Josh Woo dominated inside with his brute strength, and Darrell Lee let rip with some long range shots, creating separation with his immense athleticism. Captain Marc Leung kept the team humming along with poise and composure, ensuring the attack was balanced and the defence impenetrable. The team ninja, Nicholas Lee, stole the ball at will, like he does every single game, frustrating the other side, and making them always keep one eye out for him. Despite the physical play from the dentistry side, the law team proved they could give it back just as well. Law was able to overcome the tooth fairies and pull away with a win, 8-4.

David and Goliath. The 2007 Warriors and Mavericks in the 1st round of the NBA playoffs. Battles that ended with the underdog pulling through. This was not one of these moments. Law was thoroughly outplayed by a very strong business side that had length, athleticism and versatile players that could shoot from both sides. Their flawless team play hummed along like a machine and they opened up a lead that we couldn’t recover from. However, the boys refused to lay down and die and continued to fight to the last whistle, closing up the gap slightly despite some ‘unnecessary’ play from the business side. Even though we lost, we kept our cool and played like men, and that’s all anyone can ask for.

This game was for the bronze. Everyone wanted to win, and it showed in the team’s energy. Despite some exhaustion and cramping that took down some of our best players, the freshmen were more than capable in stepping up to the challenge. Benedict Ted played suffocating, frustrating defence on the other team’s best player, not letting him anywhere near the ball.  This disrupted the play and strategy of School of Design and allowed the team to convert on multiple goals. This, coupled with Jyh Howe’s excellent goal keeping kept the School of Design far away. Krishna and Wen Qi played on the wings using crafty footwork and speed to maneuver in out of the defence. Both played a solid team game, firing pin point passes across the court. Steven Low showed everyone his hops by soaring over defences and delivering thunder from the skies with some lightning fast shots. After the game was out of reach, School of Design suggested a goal shootout, to which we happily obliged. It was a moment of levity that capped off an intense day, and after the match, the two teams showed their respect for each other with smiles and a display of sportsmanship. Ending the day of games off with a high and some fun, we finally clinched our well-deserved Bronze Medal with an 11-5 win. 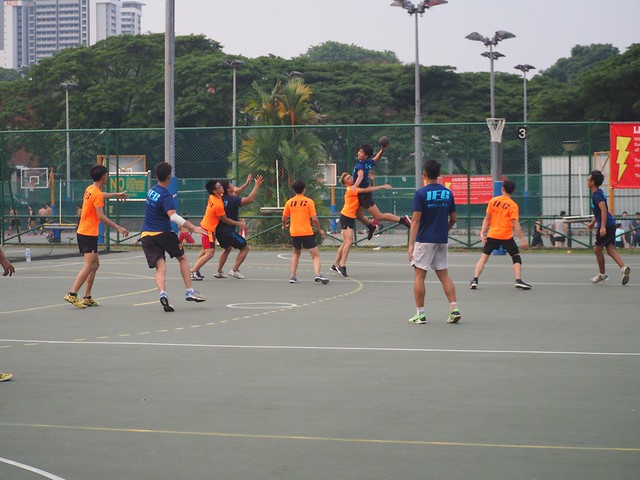 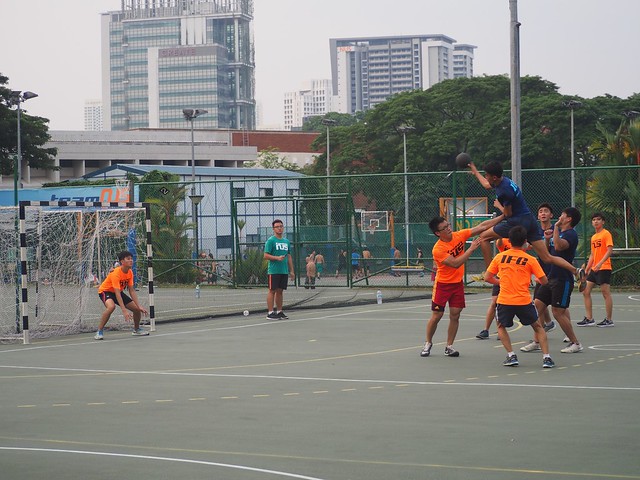 This author would like to thank the graduating seniors for their commitment to the team during their time in NUS Law. Thank you for being great examples to us, both on and off the court. 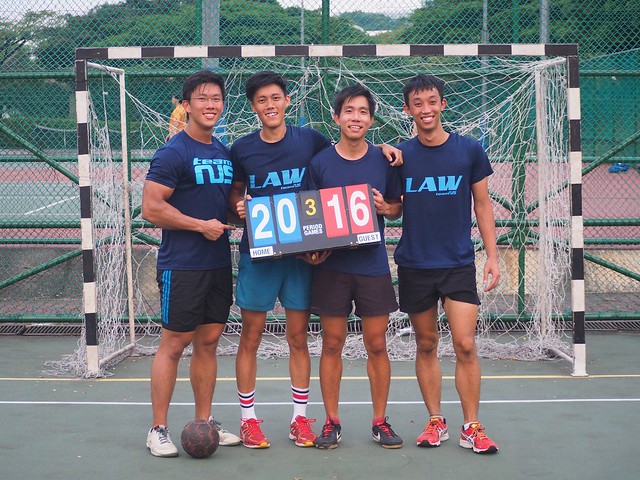 Seniors celebrating the first medal for NUS Law Handball in three years. Thanks for everything!