In a gruelling tournament spanning the entire day on 6th September 2015, the training of our Law Touch Rugby team was finally put to the test. Our dedicated team journeyed to Field 3 at the NUS Kent Ridge campus to participate in this event. The preliminary matches started at 9:40am and spanned until 5:10pm. You certainly have to give these guys brownie points for devotion! 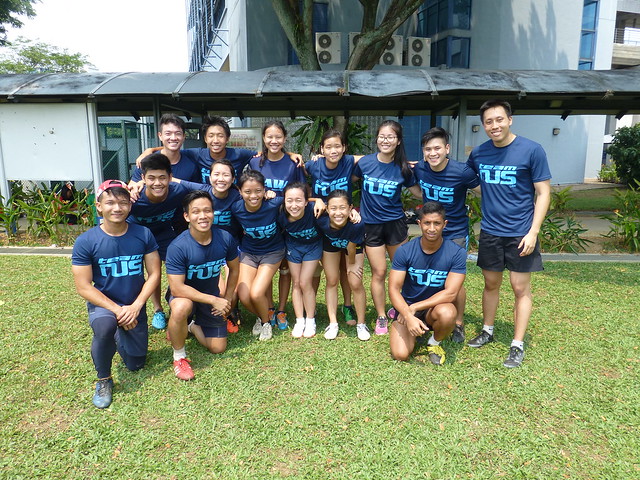 The opposition came to touch us, and touch us hard they did. The team, however, brought their A-game to the fore, testing all who stood before us. Furthermore, special mention should be given to certain players. Notable members of our team who went on the offensive were, Tim Oen, Syafiq and team captain Joshua. Wira acted as a most capable defender, who also pressed the attack on occasion. According to Captain Josh: “In the true spirit of altruism and pro-bono, we allowed hot favourites Biz and Arts to savour the victory they had trained so hard for.” We finished a respectable 3rd in our group, narrowly missing out on the knock out rounds. 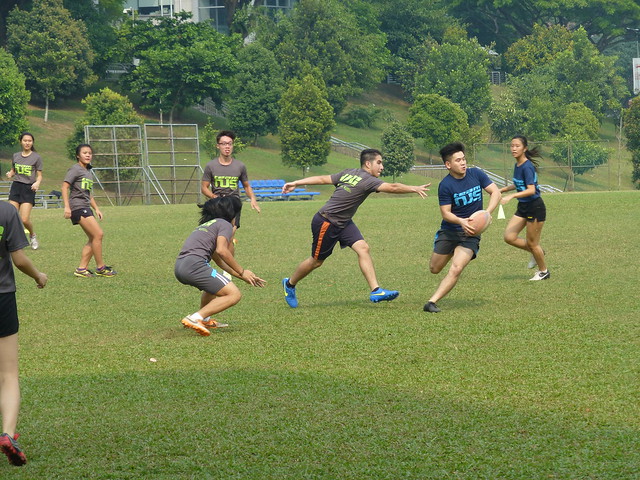 In their first match at 9:40am, our Law team was pitted against the Dentistry team. If this were a Rugby game (where teeth can go flying) and not a Touch Rugby game, our team might fear slighting the future dentists with a victory. The ferocity of our team was not dampened by this, the score being 5-0 in favour of Law.

Match highlights by Captain Josh: Fueled by bananas and water courtesy of team manager “The Mother” Chan Mei Yi (year 2, GLB), the team strode into battle like gazelles on taurine overdose. Freshman Tammie Khor, in a clear demonstration of girl power, laid the team’s statement of intent by opening the scoring with a try on the right wing after a nervous first 3 minutes. Captain Josh Foo (year 1) added a second to end the first half. South African flyer Wira Hakim Isa (year 1), otherwise known to many as “the buff one”, was unfazed by the increasing heat, clearly well conditioned by the years spent under the Johannesburg sun. He opened the second half by bamboozling the opposition with his fancy footwork before putting his muscular foot to the pedal, finishing in emphatic fashion. 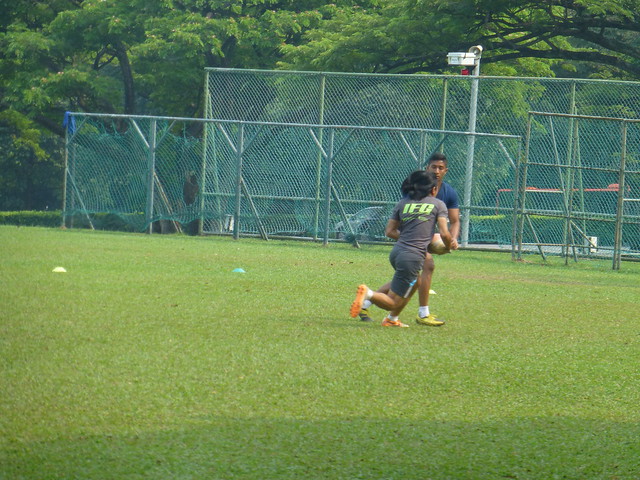 Wira chased and intercepted this Dentistry member who penetrated our team’s defence. “I am like a wisdom tooth, I can really hurt you” — Wira Hakim Isa

The floodgates opened, and Syafiq Poh (year 2) set up beautifully for Nicole Chee (year 4) to score. He struck again with a dazzling individual effort, sprinting down the right wing and leaving 2 defenders in his wake, before prepohsterously adjusting his cap as he strode in elegantly to touch down for what was the last of 5 well worked tries. 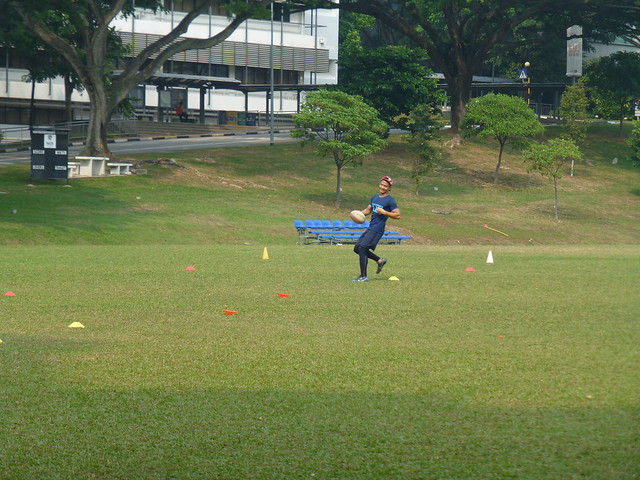 Syafiq touching down so far ahead of the opposing team that they cannot even be seen in this shot. “I look like a king, so I play like a king” — Syafiq Poh

Our team’s next match was at 11:50am against the team from Business, under the blistering midday Sun. Ironically, as team captain Joshua pointed out during the debrief after this match, the Business team actually knew the hand signals of the referee better than our team and were able to react faster. While the score was 0-4 in favour of Business, our Law team maintained its morale and resisted the Business team to the very end.

Match highlights by Captain Josh: We were determined to hit back with Mark Tay (year 3) and Tim Oen linking up well and gaining us precious ground, but the final line breaking pass seemed to elude us. Tim admitted to being charitable later on: “I was giving chance. They call me the cheatcode. You can’t use the cheatcode every game”. 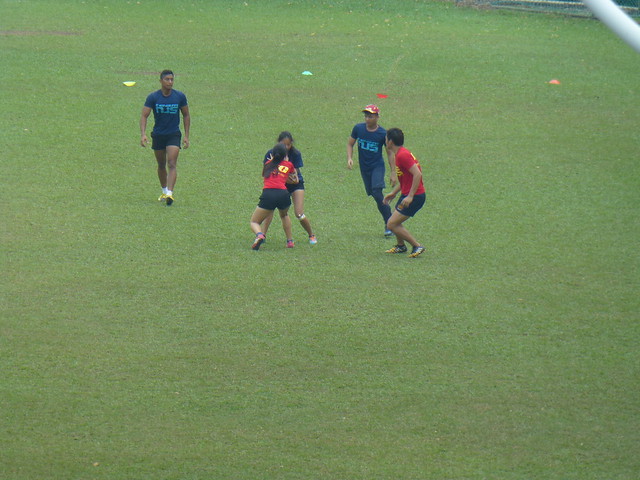 Nicole made a good effort to advance the ball but was pushed back! “Nicole with her two handsome buff bodyguards” — Captain Josh

After lunch, our team vied against the Science team at 2:15pm. The Science team’s knowledge of physics and the human body’s chemical reactions availed them somewhat, the outcome being a draw of 2-2. 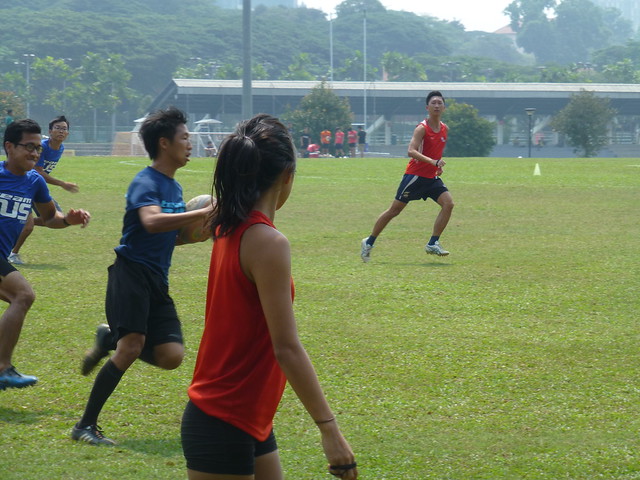 Tim Oen speeding past enemy lines. “You can catch me, but not today, nor tomorrow. Maybe on your birthday I give chance.” — Tim Oen

Team science sent one of their players (henceforth Mayweather, since we know not his name and he was a violent snob) flying into the next two touches fist first. Captain Josh took it upon himself to nullify the threat and went straight for the next touch, delivering a gentle yet firm slap to the left cheek of Mayweather who evidently was out to hurt us. In an utter transgression of sportsmanship, appealed to the referee for a penalty. To the crowd and team’s horror, the referee granted the appeal and we were penalized, but the violence and chauvinism did not stop there. Team Mayweather capitalized on the ‘milked’ penalty, making their breakthrough just as the final whistle blew and scored in the corner.

With as much zeal as ever, our team played against Yale’s team at 4pm. The outcome of the match certainly explained one reason why Yale wanted to tie up with NUS, with the score 3-1 being in favour of Law. 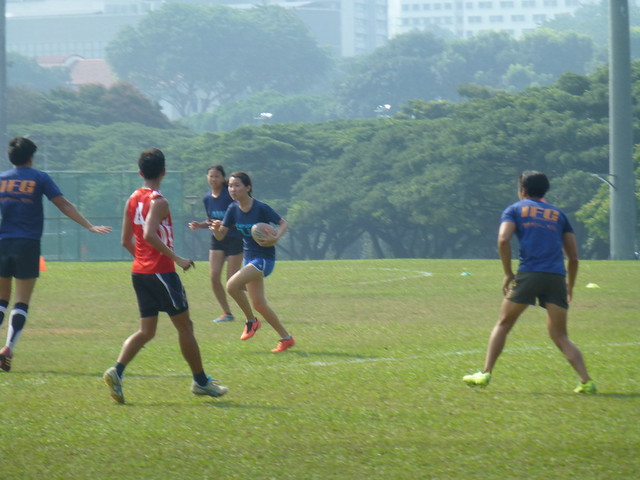 Denise has as much fire in her as the Year 1s, even though she is a Year 4! “Judas (Right, green boots)” — Captain Josh

Match highlights by Captain Josh: Law went into the next match more determined than ever to finish well so we could resume studying. The next fixture was against Yale-NUS, featuring a familiar face in the form of Nick “Judas” Siew, who evidently was torn between his loyalties to both faculties. We went behind early, conceding a try, before immediately replying on both sides of half time with King Tim slipping in for the first after a Hail Mary pass by Captain Josh, before another brilliant team effort put freshman James “Bakes” Quah in for his virgin try in his virgin tournament. When interviewed, James elatedly remarked, “I was untouched”. Josh sealed the deal with an intercept try and team law cruised comfortably to a 3-1 victory.

In their final match of the preliminaries at 4:45pm, our ardent team faced off against the Arts team. Our team’s performance showed that the Arts should not be underestimated, the score being 3-1 in favour of the Arts’ team. Nevertheless, our team did not lose steam and resisted the Arts’ team till the end.

Match highlights by Captain Josh: The final fixture saw everybody in the squad fielded, and we held valiantly against eventual winners (and overall champions) FASS to keep the scoreline at a respectable 3-1. Syafiq scored the consolation try with a breakaway effort, and as Ershad (year 1) watched from the sideline, he shared his sentiments on Syafiq’s penchant for running away by remarking “someone call the pohlice”. 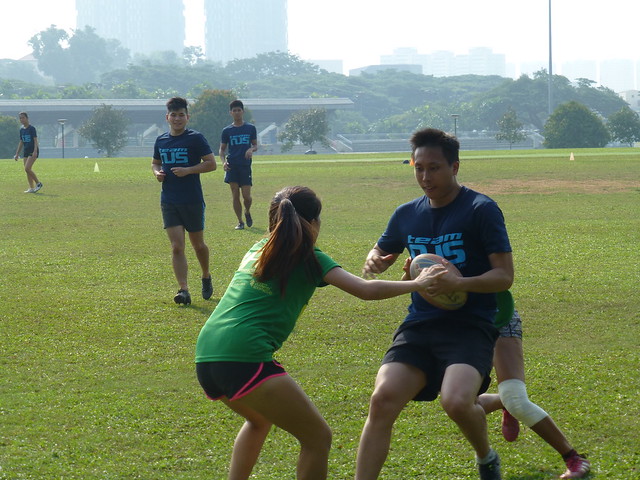 On the whole, this was a fulfilling tournament for our unified team. Though they did not progress to the semi-finals, their synergy certainly demonstrated their enjoyment. As Captain Josh wisely opined, while we may not have succeeded in touching the winner’s trophy due to our charitable nature, we touched our opponents with respect and played beautifully. More importantly, we were able to touch our hearts and know that we gave of our best. I will conclude with a quote from Assistant Sports Director Timothy: “every year is our year, until day 1 of IFG is over, then next year is our year”. Truly, the touch rugby team will only grow from strength to strength, and as the old adage goes, the best is yet to be. 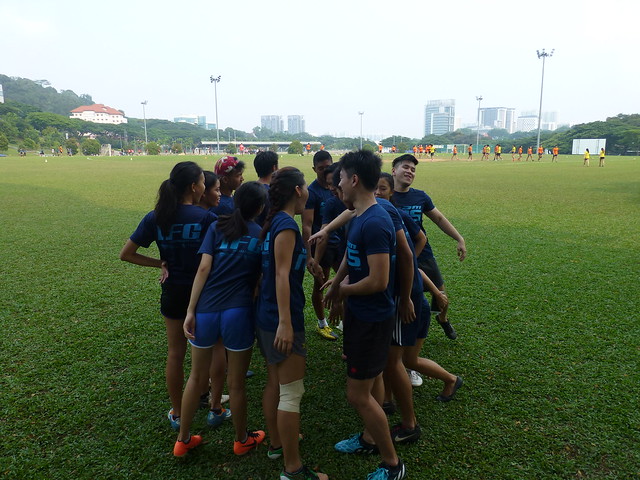 Cohesion at its finest. 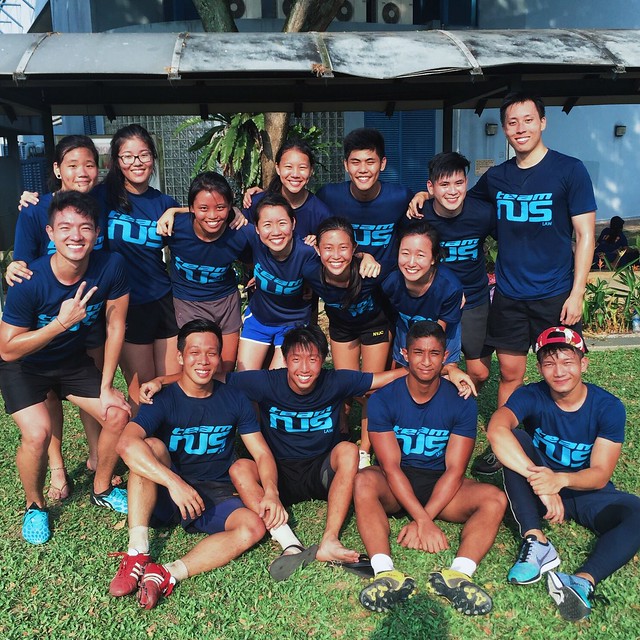 “Team Law will be back as long as no one gets skin cancer” — Captain Josh (Personal group photo courtesy of the Law Touch Rugby Team 2015.)

Written by: Keane (Y1) with special commentaries from Joshua (Y1)