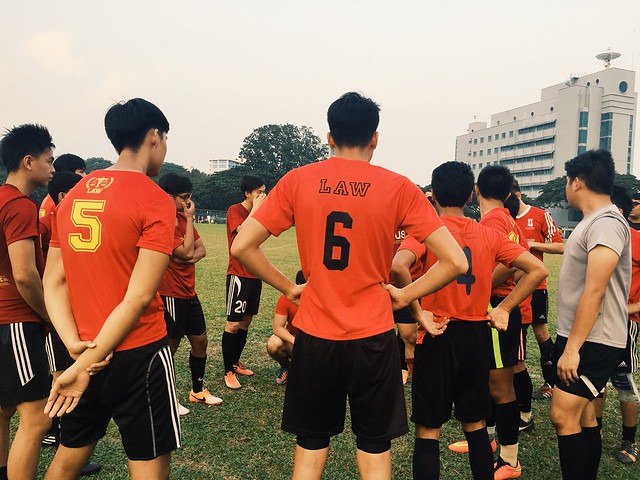 Sunday evening was spent watching 22 sweaty men eat bananas and chase after balls — it was IFG Soccer! The team, led by Captain Joshua Suwe (Y2), put up a great performance having lost no matches. We also only won 2 out of 5 matches but that’s beside the point. It was certainly no easy feat for our players, with four grueling matches squeezed into one day. Overall, the players played exceptionally well but lost due to unfortunate circumstances.

A break down of the matches 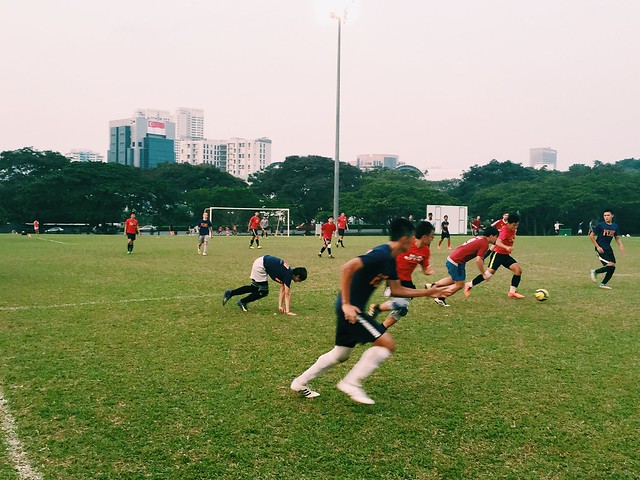 Our first match pitted us against the defending champions for Soccer Men. Engineering was by far one of the strongest team we played against and they scored first. However, the Law team put up a good defence and managed to equalize thanks to an (somewhat fortuitous) own goal. It was a good result to take to the second week of IFG where they would have to play four matches.

Highlight of the match: A combination of 3 mistakes from the Engineering team which somehow led to us scoring.

Alas, we met our arch nemesis again. They may be familiar with the human anatomy but clearly our men’s team knew how to handle balls just as well. According to Captain Suwe, “We had two very good chances, so we should have won. But Medicine is a strong team so it was a good result.” Special mention goes to Daryl (Y1) for making a magnificent save to push the ball onto the crossbar when 1-on-1 with a Medicine player. In order to qualify for the semis, the team would now have to win all their remaining three matches.

Highlight of the match: Due to an unfortunate injury sustained by Clement (Y3) while climbing an unnamed fence, we had a lack of fullback subs, which led to a clearly exhausted Fang (Y2) taking the shortest route off the pitch when he was finally subbed off. 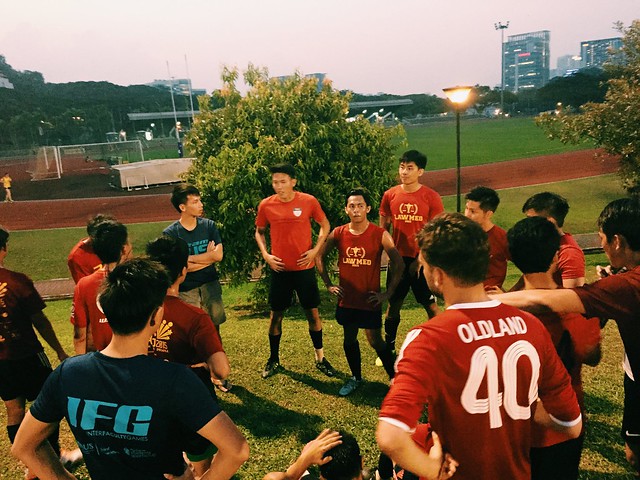 This was a relatively easy game for the team despite SDE’s dirty tactics. They spent most of the game pulling, pushing, and trying to kill Tim “Sport God” Oen (Y2). Suwe scored with a header from Josiah’s (Y1) corner, although his celebration (allegedly) “left much to be desired”. (Fang, 2015)

Highlight of the game: On one occasion, an SDE player seemed fully intent on ripping Darren Low’s (Y2) shirt off, leading him to reply with “you want my shirt I give you la”. 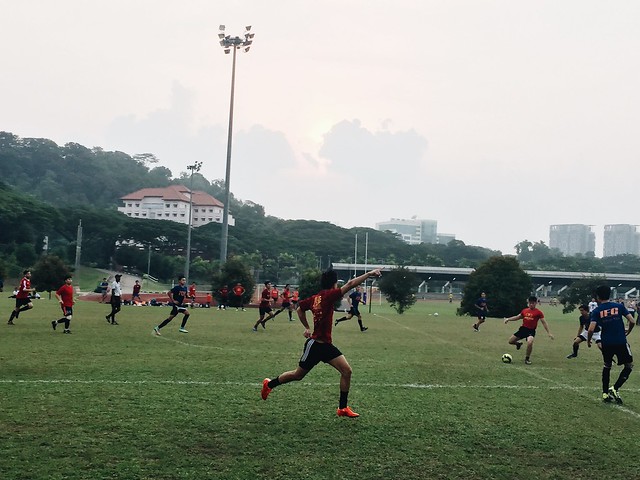 The Law — Yale-NUS match was relatively manageable as well. We dominated the game and peppered the goal with a lot of shots. While we were playing well for the first two thirds, we lacked the killer touch in the last third of the game.  Nonetheless, players Michael Bin and Prasith earned our team two much needed penalties that landed us the victory. Both penalties were scored by Darren Low, who confidently picked the same spot twice.

Highlight of the game: Marcus Hoh (Y2) “cramping” after 15 minutes into his first game. Meanwhile, the rest of the non-cramping players had already completed two matches prior. 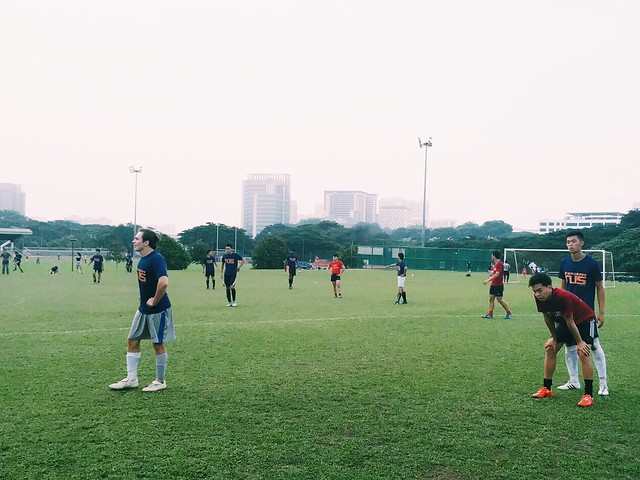 While they may dominate us in other ways, the Law team dominated the field and fought to victory.

The pressure was definitely on for the match against the Science team. Any of the top four teams had a chance of entering the semi-finals based on the last match’s result. This was the make-it or break-it game and our men’s team went all out. Tensions definitely ran high and there was quite a bit of neck-to-neck action (not in the good way). Science was yet another dirty team, resorting to tactics such as spitting and trying to incite fights. Special mention must go to the guy in pink who had a lot to say for someone who was not even playing IFG. We had 3 good opportunities to score but we didn’t manage to get a goal, ending with a disappointing draw.

Highlight of the match: Yet another “cramp” from Marcus Hoh (Y2), albeit this time at a more tactical timing. 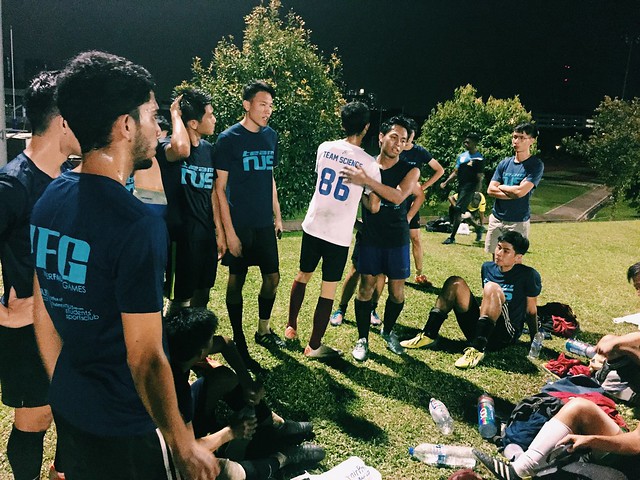 The team was clearly dejected by the results.

Overall, while the odds were not in our favour, our men team fought hard and well and displayed excellent sportsmanship. As Captain Suwe’s mantra before each match goes, “Most importantly, go and have fun.” 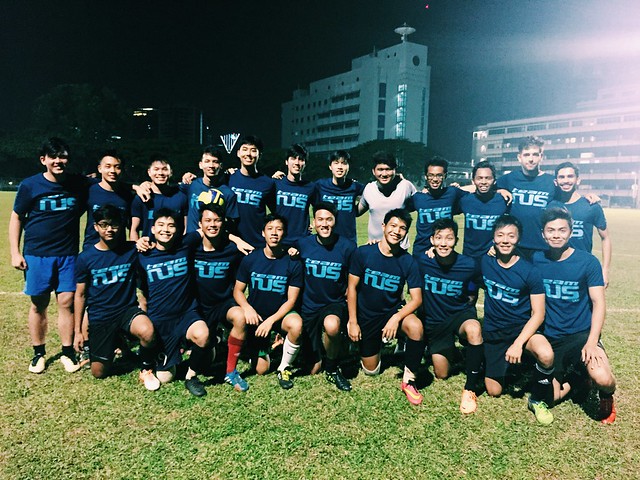 Had the last match on the field between Engineering and Yale-NUS been a draw, we would have made it to the semi-finals. Unfortunately, Yale-NUS walked over due to their players’ injuries and we did not make the spot.

However, all is okay. What’s important is that we did not lose to Medicine. See y’all at the Law-Med Games.