Early on a bright Sunday morning, a bunch of bumblebee-coloured shirts made their way down to SMU, with their wearers in tow. Our team of pros and social players arrived early ready to do our best and hopefully win. Unfortunately, the day started off on a negative note as our best female player Lili Teo fell ill (no doubt due to the stresses and strains of law school, plus after an awesome showing at Law Frat Volleyball the day before).

Our first opponents, the Law Soc (The Favourites) fielded a youthful yet experienced line up which presented quite a challenge for our team. The first match of the day saw the enthusiastic David Fong and our own foreign talent, Tom Chou Yen Ting, take to the Court. Staring in the face of a former IVP vice captain and an older gentleman, Tom and David fought bravely but eventually succumbed. While this was happening, the women’s doubles pair of Elin Wong and Ho Wan Yi trooped onto the Court to do battle. Facing them was a pair of ladies who had both skills and experience and ending their challenge in straight sets.  A similar fate befell our mixed doubles pair of Tan Khai Boon and Lai Su Lyn who were undone after an epic struggle.

However, it was not all doom and gloom for the NUS Team. Nicholas Soh showed why he’s first-class honours material with a first-class performance against his opponent, his senior from the badminton team. The game stretched to three long sets and the fatigue was evident on both players’ faces. It was tiring just watching them. In the end, Nic narrowly lost but it was a courageous performance that belied his small size.

Eventually, we did pull one back against Law Soc. The vastly experienced Wong Chun Han and David Lee stepped up to the Court to face the second mens doubles pair from Law Soc. Both sets were well-fought, with Chun Han and David Soo emerging victorious through a series of well placed smashes and dogged defending. The final team score ended 4-1 to Law Soc.

Facing the second match against SMU (The Rivals), one wondered what to expect. The team line-up was vastly improved from previous years.  Up first, our doubles pair of Joshua Koh and Wei Zhong faced a determined pair from SMU. In the end, their consistency proved too strong for Joshua and Wei Zhong, who fought valiantly and stayed in the game by hitting several great winners.

The highlight of the tie was the mixed doubles between Elin and Chun Han, and an SMU pair. Despite this being a friendly, the competitive edge of both teams was certainly not blunted. Despite being battered and bruised (literally and figuratively), their class told. Elin despite a rough first set, recovered to pull off some gravity defying saves in the second set taking the match into a nail-biting third set. The heroics of Chun Han and Elin continued with more jaw-dropping shots from both players (one of which saw the opposing team drop their rackets and clap) in the third to claim a hard earned victory over SMU.

Unfortunately, we weren’t able to capitalise. Su Lyn and Sumi played the next game against two SMU girls and started well, winning the first set. However, they couldn’t win the next two, possibly distracted by the dashing Khai Boon who strolled over to their Court to give “moral support”. Finally their opponents lucked out, aided by the bright lights which dazzled our players. Home ground advantage? David Soo too had a tough game against an opponent who had a clear height advantage. David played his game with class and dignity, but the win was just one step too far for him.

It was thus left to Shaun Lee and Khai Boon to play the last match. They charged around the Court, punishing every mistake made by the SMU opponents, one whom we strongly suspect to be Dr Sundram Soosay’s doppelganger. The final team score was 3-2 to SMU.

We left the Court having had fun and having been, umm, “friendly”. The games were generally played in good spirit and everyone who went down got to play at least one match. Surely, now, winning isn’t everything eh? 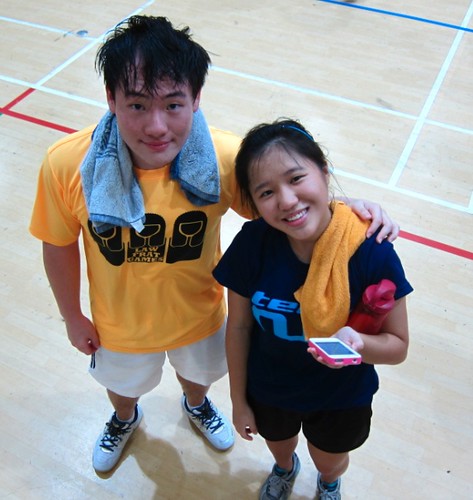 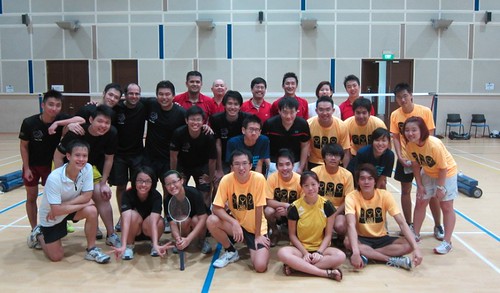