NUS went down in a blaze of glory yesterday, coming up 2-3 against SMU despite several questionable decisions by the referee.

Before the game, the atmosphere in the two camps were markedly different. 5 mins before the game, the SMU team could be seen in a huddle discussing their strategy. One could occasionally pick out phrase such as, “Stay on the flanks, score from the centre….etc.” In contrast, the majority of the NUS team arrived 5 minutes after the game was supposed to start. Whoever wanted to play first was welcome to simply walk up onto the court.

SMU immediately shocked us with their seriousness. As we soon came to realise, they were playing to win, and scored the first goal. The NUS team quickly rallied, and upped the level of their game as well. By the end of the first half, the score was 2-2, with two amazing goals from See Tow (year 2) and Daniel (year 2). In the second half, SMU managed to score early on, which put NUS on edge. NUS controlled the remainder of the game, taking at least 8 shots on goal. Alas, despite some close calls, they failed to connect and the game ended in SMU’s favour.

NUS’s second game, against the Law Society was also a well-played, intense, game that had everybody on their feet. Despite initial assumptions that the Law Society would by out of shape older competitors, it turned out that they were mostly year 5 or year 6s who were more than competent at the game. The match ended in a 3-nil loss for NUS.

Despite this Law Frat games, everybody knows that the true test of our mettle is still to come next year, during the Law-Med competition. Whatever does not kill us shall make us stronger, and now the steel of the NUS Law floorball guys have already been tempered by the strong showing that our opponents have put up. 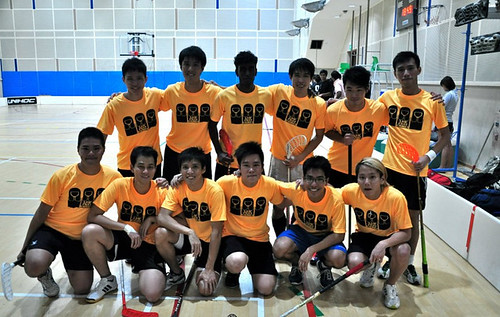