After an intensive downpour which left souls dampened even further (“further” because SLS had already caused an irreparable damage on the Law Ones earlier), the weather cleared up to be nice and breezy, setting the stage for the impending clash of the titans between NUS and SMU Law Volleyball Teams. (Unfortunately, the Law Society team was unable to make it.)

In the opening match, NUS clearly dominated the game, drawing first blood by gaining several consecutive points and leaving SMU helpless against our strong attacks. Special mention goes to star player Shawn Joo, who terrorizes not only the opponents but ourselves too, with his tall build and intimidating lightning fast spikes, leaving no chance for a return. Don’t be deceived by his seemingly calm and friendly looks; once he leaps into the air and sends the ball crashing down to the ground like an asteroid, it would do you good to just stand aside and applaud the beauty of the shot instead of risking your own pretty face being disfigured or getting bruises on your body.

As NUS took the lead throughout the game, SMU started to warm up as well and the rallies became longer, with SMU scoring points through good blocking skills and returns. Halfway through the game NUS began substitution to up the tempo of the game, where Carol subbed Mie, Lala for Lili (Or was it the other way round? Actually, we’re pretty confused ourselves.) and indeed, the match was concluded quickly with NUS winning 25-17.

After a mutual swap in sides, the second set got off to a slow start for NUS. A brief spell of complacency had set in where we made a series of unforced errors (or perhaps attributable to the sudden dip in the fengshui) like serving to the net or hitting the ball out of the court, awarding SMU numerous valuable points. Undaunted by this, Vice-Captain Hao Ran proved to be infallible as he paved the way for the team, dashing to save the ball and using his signature curve-the-ball-just-across-the-net to earn points and level NUS’s score. He also proved to be the most versatile and multi-talented player on the team; having the ability to use not just his hands but his legs, chest, you name it, in attempting to reach for the ball. Captain Kelvin also displayed his prowess with his impeccable service and setting of the ball for spiking. Combining his yin and yang features of dancing and flexing his masculine muscles on court, it is indisputable that Kelvin is the subject of admiration by all and jealousy — suffered by guys who can only dream of attaining his godlike perfection.

Faced with the possibility of losing the second set, NUS held the fort by putting up a stronger defence and countering the spikes from the opposing team. The girls proved to be tough obstacles for SMU to conquer as well, with Jin Shan being a fantastic setter, setting the ball at the sweet spot for our players to spike the ball down. Carol and Mie were also crucial in receiving the shots from the opposing team as well as their display of never-say-die attitude in running to save the ball before it touches the ground. Larisa played a pivotal role in delivering beautiful services across the net, sometimes so deceptive that the opponents have difficulty judging where the ball would land, and Priya had a dominant position to play on the court with her flexibility in executing different shots across the net (spikes, sets and digs) which gained many valuable points for our side as well. We eventually triumphed 25-23 in the second set.

With two sets down, NUS was left with one more set to clinch the ultimate victory over SMU. Adrenaline pumping and having the ball already in our favour, Joey spearheaded the attack with his highly misleading services which seem to be heading straight for the net but are in fact, nicely delivered across the net. Meng Hang also took advantage of his height in delivering spikes as well as blocking the shots from SMU at the net. Just before the match ended, a muddy Weisong came over from the field after playing Frisbee to aid us in our final conquest of the game. Playing the role of spiker, Weisong gained much credit for scoring points with his spikes. The third set was indeed an easy game for us and we clinched it easily with a score of 25-14, thus giving us a win of 3-0 over SMU.

An interview with Captain Kelvin after the match on his thoughts of the game:

“The weather held out, everyone worked as a team and the play was good! It was quite exciting for me just watching the game from the side.”

Congrats to the NUS Law Volleyball Team for their win over SMU! Hopefully this epic win can be witnessed again during the upcoming Law-Med competitions where we face-off with them. 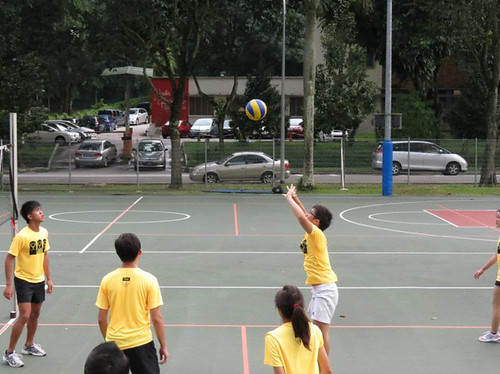 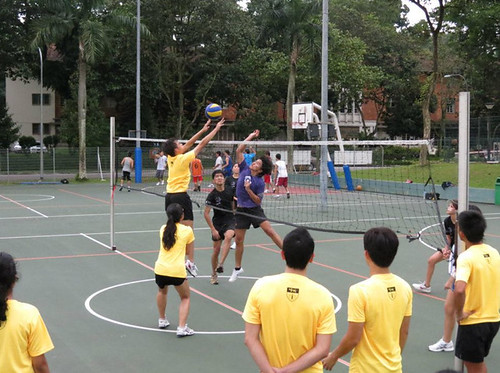 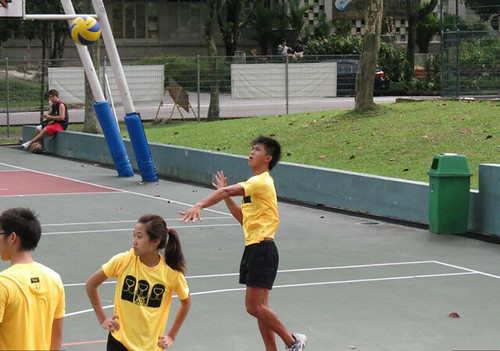 Capt Kelvin with his godlike service 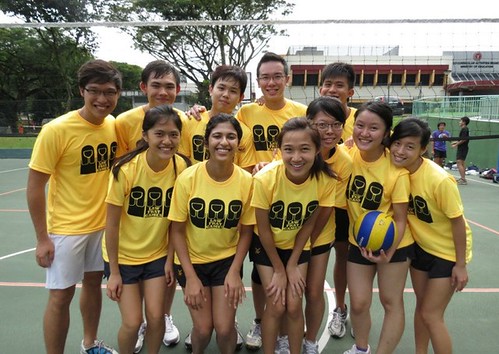 “Lili, the star spiker, contributed immensely to the team with her flawless strong serves that belied her willowy stature. Of course, this should be no surprise to those who are aware of her badminton background — her technique employed for a badminton “smash” seems to have been effortlessly transplanted to a volleyball “spike” for this gifted sportswoman.”