“Tell them… We tried,” said Lu Jialing (Year 1) when asked what we should write for this Justified article.

Such was Law faculty’s inaugural foray into the exciting world of Dodgeball. We might not have had much skill (nor training sessions… 2 to be exact), but at least we had heart. And Josh Woo’s muscles. The team consisting of our captain Josh “Guns” Woo (Year 2), Gavin “Master-thrower” Neo (Year 4), Tan “Ball-catcher” Yong Quan (Year 1), Siow “Second-master-thrower” Wei Loong (Year 1), Shi “James Bond” Zheng (Year 1), Marcus “Ever-ready” Tan  (Year 1), Leon “Last man standing” Chan (Year 1), Kenneth “Almost there” Chan (Year 1), Gilbert “Enthusiastic” Chng, and flowerpots Phoebe, Jialing and Cheryl (Year 1s), arrived at the Sports Hall at 1pm on Saturday, more ready than ever to take on the various teams we were put up against.

Except when Josh accidentally submitted the wrong Phoebe’s name into the system which almost barred the real Phoebe from participating.

Despite that small hiccup, we put up strong fights against Engineering and Business despite losing to them 2-3. There were, however, many noteworthy moments in the matches, such as when Shizheng amazingly dodged 3 high-speed balls by rolling across the floor of the hall like a true James Bond, only to roll over the line and get disqualified. (Which was also how we lost 2 other matches). In one of the games against Engineering, all of our players were knocked out, except for Leon, who had to go against 5 players alone. Sadly, despite his most valiant efforts, he too, got knocked out of the game, but not before eliminating two of our opponents.  Josh Woo’s guns certainly managed to scare off a number of opponents as he leapt up to smash each of the balls across the court. The other teams soon realized our big gem and started attacking him with balls to get him out of the match. Unfortunately, he too was unable to dodge the deluge of balls that came his way. Special mention to all of the girls who at one time or another, were the last ones left in the team, only to get hit by 5 incoming balls a second later, effectively ending the game. 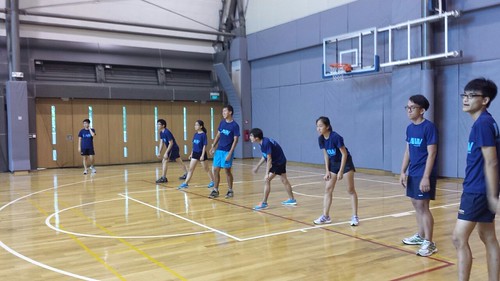 Team Law all ready for war.

Our match against the Science faculty was the highlight of the day, where we won 3-2. It was indeed an exhilarating match as we tied with them after 4 games, with the last match left to determine the winner.  In such a precarious situation where our pride was on the line, Master-thrower Gavin and Master-catcher Yong Quan rose to the occasion and  started catching the flying balls thrown from the opponent team, putting many of them out of the match, thus securing a win for us

Unfortunately, up next were the eventual champions, also known as the firing squad, also known as the team with incredibly good-looking guys, Yale-NUS. Their good looks were proportional to their techniques and skills, and we managed to survive no more than a minute against them in all of the matches. In the words of the referee, “That was the shortest match of today.”

Alas, this is but Law’s first attempt at the Dodgeball IFG, and we will come back stronger and better next year! 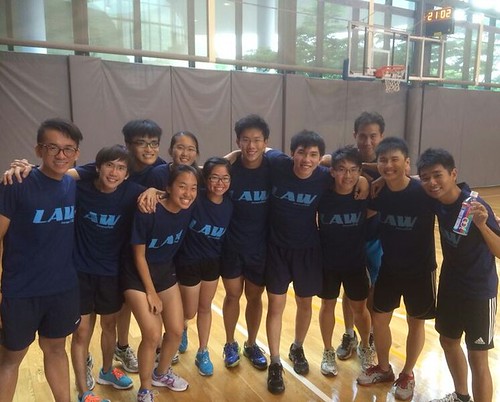 A happy group shot to end of a fruitful day… And in the hopes that 100 Plus will sponsor next year’s team.