Crowds gathered on 23rd August at the NUS University Town Sports Hall to catch the IFG Volleyball preliminaries. The men’s team, consisting of Andre Koh, Shawn Joo, Hyrum Li, Norman Aziz, Gan Xian Kai, Chua Cheng Aik, Joey Lim, and You Xiang, took the onlookers by storm as they proved themselves to be worthy contenders for a spot in the next round. 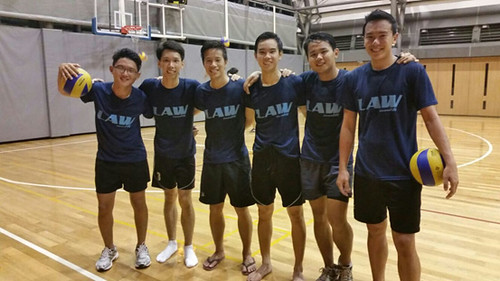 In their first game against USP, the men’s team overwhelmed USP by winning both sets of the match with a score of 15-4 and 15-6 respectively. With a series of powerful services and steady 3-touches (receive, set, spike), the team effortlessly sent balls over to their opponents side and scored points consistently.

The men’s team fought persistently against the School of Design and Environment and obtained a victory of two sets against one. This time, the SDE team consisted of stronger opponents with established players and a balanced team. It was an exhilarating match as the scores were very narrow and the crowds would cheer each time a point was scored.

The Law team was obviously well prepared for competition. Joey gave solid services while You Xiang constantly dived and managed to save some pretty intense spikes from the opponent team. The most memorable offense from the team was executed by Shawn, who delivered powerful and accurate spikes that left the opponent team scrambling to save (and also scored a lot of points!). Special mention goes out to Andre, the captain of the team. Predominantly playing the role of the setter of the team, he carried the team by doubling up as a spiker, a receiver, and even blocked a few balls. 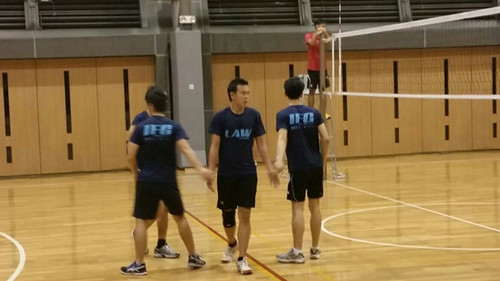 Unfortunately, the men’s team lost to the two powerhouses FASS and Business with a score of zero sets to two sets. However, for a small team consisting of eight people from a small faculty, they have done extremely well with their remarkable perseverance and fighting spirit.

The female team, consisting of Christie Long, Charmaine Lim, Teo Lili, Larisa Cheng, Teo Jia Xuan, Zhou Wen Jing and Hannah Heng, also fought valiantly against their opponents, namely SDE, Medicine and Science. After a series of  matches, the girls regrettably lost by two sets to all the faculties. Even so, it was a really enjoyable and fun experience for the girls as some of them did not have prior experience but managed to pick up valuable skills along the way. Hannah, the Girls’ Captain, also revealed that the girls received a personal best score of 8 points! Great job girls, we are really proud of you! 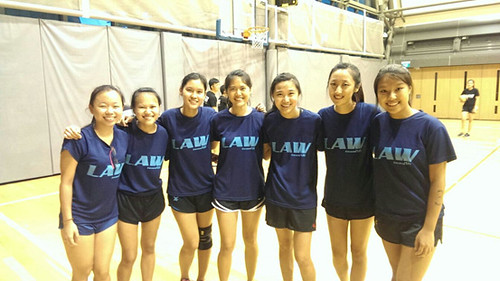 Hannah Heng (Girls’ Captain): “The main focus of the girls is to have fun and do the best we can.”

It was a truly wonderful experience watching the Law Volleyball teams play and rooting for them. Even though they did not make it to the next round, I was inspired by their determination to do their best and to score as many points as possible, regardless of the outcome. Good job volleyball teams, and continue to perform for the other games ahead!