Learned Hands Handball Club arrived at the SRC in the afternoon of Sunday 24 August with high expectations. Faced with the daunting task of qualifying from a group comprising both Medicine and Business, the second and third runners-up from last year’s IFG, Learned Hands still expected to emerge victorious from the group. After all, we were the first runners-up in last year’s edition.

Learned Hands went into the competition a team in transition, the squad having been decimated by the untimely graduation of many of our key players to the extent that only 3 of the original 7 players who formed the starting line-up of the famous Med-Law victory of 2014 remained. In addition, Joshua Woo, one of the three surviving members and also the co-vice captain and muscle-bound member of Kwong’s Kabinet, was struck down with a mysterious stomach flu bug on that very day that rendered him unable to execute his on-court intimidation for extended periods of time. All this goes towards explaining the inexplicable performance in the first game against the Faculty of Arts and Social Sciences. After going down to an early goal from Arts, Joshua Woo (running at only 70% capacity) rifled in a thunderous equalizer that left the opponent’s goalkeeper rooted to the spot. After some nail-biting, end-to-end action, including a goal off a brilliant spin move from Law’s resident Korean hunk Jun Jinsei, the game ended in a 7-7 draw. A key moment in the game was a controversial penalty conceded on the left side that topped-off a poor defensive display by a team renowned for having the most conscientious defence that is hardly breached due to negligence. 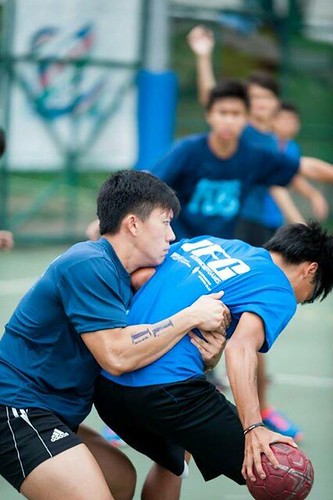 The post-game team talk by captain See Tow was a rare moment of sobriety from the consummate clown. Of his many words, there was a constant emphasis on the need to improve on defence. Going into the next game against Science, the team was desperate to get back in the running for qualification even though we had a self-inflicted mountain to climb after the unexpected draw against Arts.

Against an opponent that on paper was the weakest in the group, Learned Hands set out with one objective — to achieve a total shut-out of the opponent. The first few minutes of the game was a stalemate, with the Science keeper producing some heroics including a stunning save to deny a characteristic Lance Cheow rocket from range. The defensive intensity from the Learned Hands on the other hand, was strikingly evident, no doubt aided in no small part by the insertion of newly-elected Law Club member Marx Tay, whose very image evokes notions of steadfast solidity and redoubtable reliability. His defensive presence on the 6m line was a marvel to behold. Before long, the man who wears many hats at the IFG, glory hunter Julian Foo scored in quick succession, putting the game beyond Science. Justified Chief Editor (Elias) Arun (not to be confused with one SLS and Legal Theory Professor) got in on the action as well, handing off a classy assist for ex-Sheares King and Milan’s most fashionable man for the last semester Marcus Quek to finish through the ‘keeper’s legs. 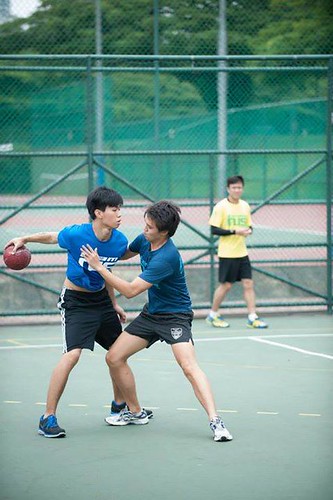 The Learned Hand’s defence returned to its original watertight state, with Science unable to build a case to score any points. This defensive effort was aided by strong defensive performances from Russell Wong (rugby superstar) and Darrell Lee (Dota 2 extraordinaire), both of whom had come in to close the game out. 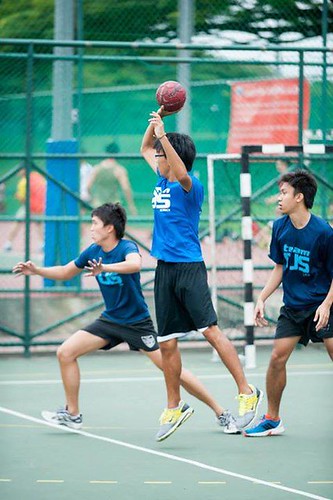 Towards the end of the game, Jinsei was felled by an unfortunate collision and badly hurt his ankle, ruling him out of the next two crucial games. Without Joshua Woo and Jinsei (collectively known as Team Muscle), it was up to basketball superstar centre Wayne Chan to man the spot in the middle, a position he had scarcely played in training and warm-up games.

The penultimate group stage match was against Medicine, thus far unbeaten and carried by a former YOG Handball player who refuses to join the IVP team in order to torment opponents in the IFG every year. In a game we could not afford to lose, Learned Hands found ourselves down 2-0 within the first two minutes. As we settled into the game with Julian man-marking YOG Handballer with a defending style best described as desperate, we slowly clawed our way back into the game on the back of a string of brilliant saves by Chuan “de Gea” Lim. At half-time, we were still behind, although vice-captain and winger Timothy Ng had pulled one back amidst a collection of impressive saves by the Medicine keeper (likely inspired by his opposite number). Slowly but surely, Medicine’s immunity wore off and stand-out performer Julian equalized with a run and shot through the defence that belied his desperation to win the game. With two minutes left on the clock, there was a sense of inevitability that we would take the lead and indeed we did. Captain and vice-captain combined to great effect, See Tow delivered a pin-point no look pass with his off-hand to Timothy who had displayed ingenious movement to lose his marker and find space on the line. Timothy, the former Raffles softball captain who boasts a bullet of a shot, simply couldn’t miss. It was then a matter of holding on to the slender lead as the time ran down. Heartbreakingly, with 30 seconds left on the clock, the referee awarded a penalty to Medicine for the most innocuous of fouls. The last play of the game was Captain See Tow attempting to salvage the situation by standing in as the goalkeeper, getting a hand to the effort by YOG Handballer, but failing to keep the ball out. Unlike the gamble that Louis van Gaal made in the World Cup that saw the Netherlands through against Costa Rica, See Tow was no Tim Krul and this unexpected goalkeeper substitution backfired, giving Medicine an undeserving draw and dealing a crucial blow to our hopes for qualification.

Facing the prospect of elimination against Business, the Learned Hands again unraveled early into the game, allowing Business’ exchange student to squeeze a shot in past Chuan to give them an early lead. From that point on, Learned Hands controlled the game magnificently, but was thwarted repeatedly by the brilliant goalkeeping from the Business goalkeeper, to the point where even the watching IVP players started commenting on how they would try to recruit him to represent NUS at SUNIG and IVP. He repeatedly saved long-range thunderbolts from the very potent Lance Cheow and multitalented Julian Foo, wing shots from co-vice-capt Timothy Ng, and even a shot from See Tow that seemed destined to be nestled in the top corner. Despite his heroics, the Business goalie was powerless to stop James Lai Kaibin (KB24), the alleged brother of last year’s Law Handball girls’ captain, from bouncing a shot past him to equalize the score.  However, Business quickly responded, and after some brilliant simulation (diving/play-acting) from their exchange student, the referee was convinced to send Wayne off for two minutes for the offence of necking (which is as offensive an offence as it sounds). Seizing the numerical advantage, they went ahead again. The undying spirit of the Learned Hands in the face of adversity emerged once again, KB24 cemented his place in Learned Hands folklore by scoring an almost identical shot past the Business goalie to make it 2-2. Not to be outdone by his opposite number, Chuan der Sar then made a string of jaw-dropping saves to keep Learned Hands in the contest, in particular a save from a penalty taken by Business’ exchange student to keep the score-line level. At the end of normal time, the match finished 2-2. 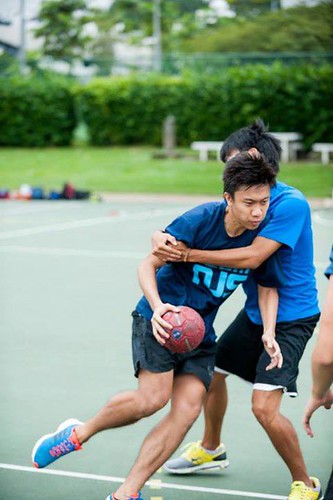 Level on points and goal difference, a pre-agreed extra time was played out between Law and Business to settle which team would qualify. At this point, co-vice-captain Joshua Woo, playing through pain and illness, scored a long-range screamer that whistled into the top corner, with the Business goalie evidently caught by surprise by the speed and power of the shot. Alas, yet another defensive lapse allowed Business to equalize, before a controversial goal (which left Joshua writhing in pain on the ground in an alleged offensive foul in the build-up to the goal) scored by their exchange player gave Business a 4-3 lead, which they hung on to with some desperate goalkeeping to thwart Lance Cheow, who continually threatened to penetrate their resistance. The match ended this way, with the Learned Hands eliminated from the IFG proceedings.

Though the team bowed out of the competition at an early stage, the young Learned Hands have acquitted themselves brilliantly. With more training together as a team, the Learned Hands are hopeful of retaining our record of beating Medicine at the LAWmed games, a record which held for the past 3 editions. At this juncture we would like to thank our lovely fan club (Jaime Lye and Delise Yang), who had to contend with a rather ear-piercing LND, and our seniors who helped us during our training for the IFG. We would also like to make a special mention of Lim Hao Jie (Sheares Dance King), whose contributions were sorely missed due to an unfortunate injury. 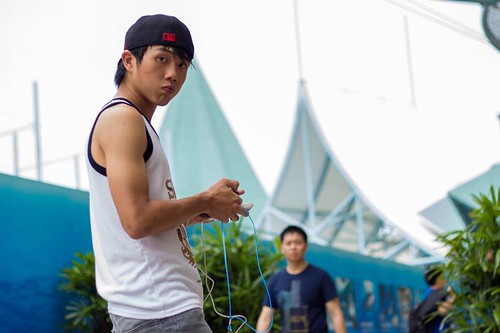 Here’s a photo of Lim Hao Jie for the ladies. Remember to like his HJFC Facebook page!

As is evident from this article, Learned Hands is made up of a disparate bunch of multi-talented people who like to indulge in self-praise, who enjoy the sport because of the high levels of teamwork, physicality and technical skill it requires. As mentioned previously, we are a team in transition and would welcome anyone to come join us and learn the sport. With your active involvement, to come down for trainings and to enjoy the game and the company, the Learned Hands will have a brighter future to look forward to. Together, there is hope, Hope for a Better Age.