That’s how the day progressed for the Men’s Basketball Team at the IFG. Two wins from four matches is a pretty good result. But these were just the Tip-Off results. The actual results were very different. The team which had almost progressed to the semi-finals at last year’s IFG was much smaller this year, missing players due to them either graduating, going on exchange or not being able to make it. In fact the team only consisted of 11 players when a full roster could contain 15 players. Needless to say the expectations were tempered and the main goal was to try to do our best. Drawn into a group consisting of the Faculty of Engineering, School Of Computing, the Faculty of Medicine and last year’s champions the Faculty of Business, it looked to be a tough road for the team to tread. In a sport where the height of the player was vital; indeed it is said, “you can’t teach height”, we were possibly the smallest team present. 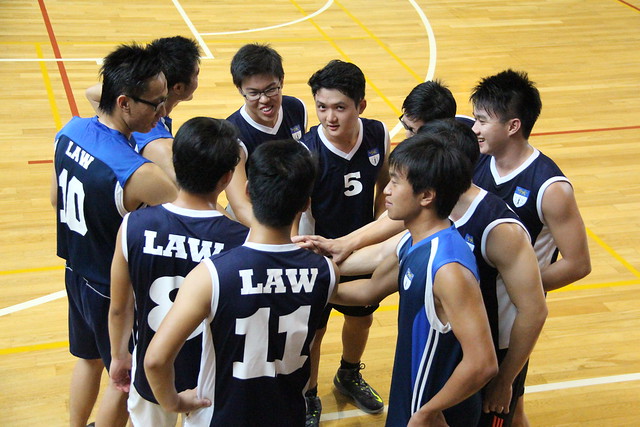 The team starting off feeling good.

We won the tip off and You Xiang started off the scoring drawing a foul and splitting the free throws. Initially, the Engineering players were called for travelling so many times, that I wasn’t sure whether it was their players who were on exchange or ours. Our team dared the engineering players to take three pointers and for the most part it worked, as they were unable to score from beyond the arc. Tragedy struck early as veteran player See Tow, playing in his last IFG, was taken down rather roughly landing on his leg and hurting his ankle. As he lay sprawled on the ground in obvious agony I could not help but think of what could have been. Later, when he was icing his injured ankle he blamed his ‘old man legs’. 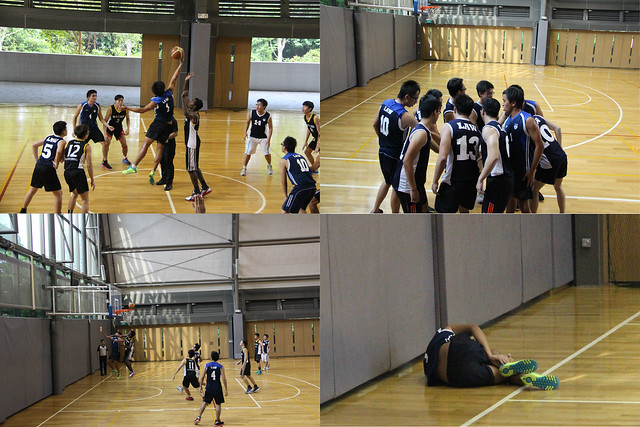 Resuming play, the Engineering players took advantage of his absence. Our team played with passion but the Engineering team took the lead early and never looked back .You Xiang played aggressively and drew another foul and once again split the free throws. He then went on to score a layup and then a jumper causing Engineering to call a time out. After their time out they regrouped, started scoring again. The only other player to score in this game was vice captain Kenneth who connected on a jumper off a slick pass from You Xiang. Already fielding a small team, the loss of a veteran player was worrying. The fact that the shots were simply not falling also did not help. It was observed by the players that the hoops at U-Town were different from the ones at CCA B. This was obviously some ploy to stop us from scoring. It obviously worked, as we lost to the engineering team. 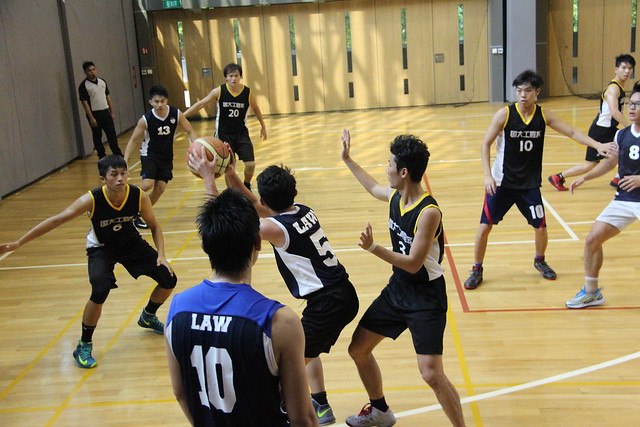 You Xiang scored all but 2 of the entire team’s point. MVP!

Trying to recover from our first loss, we were more confident against the next team- School of computing (SOC). This feeling was compounded by the arrival of freshman Rashpal who added some much needed size to the team. Once again we won the tip off and started off on a positive note as Kenneth scored a jumper. You Xiang then executed a behind the back dribble and took a jumper but it rattled off the rim. This seemed to be the case throughout. Though we were able to match SOC play for play they were making their shots while we were missing them by the smallest of margins. Freshman Marcel was then subbed in and hustled, improving the toughness of the team. The halftime message was simple- FIGHT FOR THE REBOUNDS! We were giving too many second chances to the other team and if we had the ball, they couldn’t score. It started to show some results as we started fighting for the ball and making shots. You Xiang drove in, drew the foul and split the free throws. Then, Jian Qin, famous for his bank shots, made a jumper, but this time it was all net. 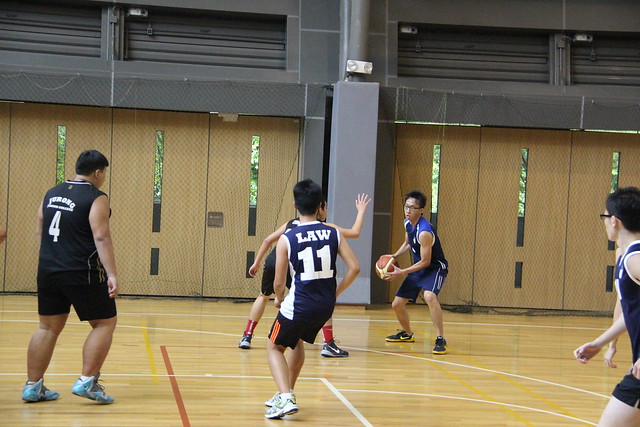 Jian Qin setting up to make a shot.

However disaster struck again as Elias injured his leg due to a rather carelessly thrown knee from a SOC player and we lost another player to injury. 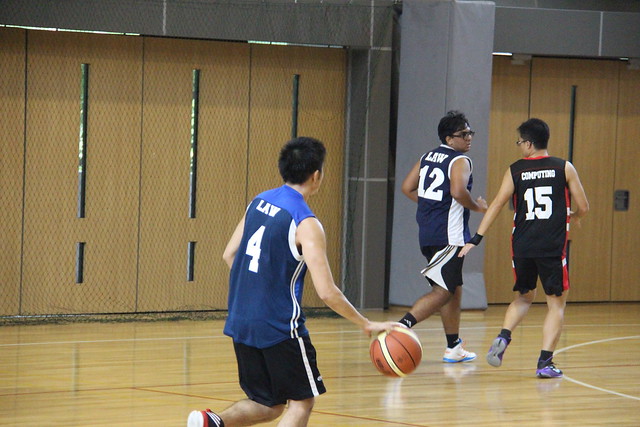 Elias dribbling up the court before he was injured.

We showed our resilience as we didn’t give up and Chester made a jumper, boosting morale. Though by no means a tight game score wise, a win had still been achievable but in the final few minutes, we eased up and SOC racked up the points creating a score line that didn’t really reflect the game. Afterwards, it was clear the team was disappointed with the loss, with the captain remarking that we should have won the game.

This game was clearly personal. After the Law-Med games in 2014, where they had lost for the second straight year to our team, the Medicine team was clearly itching to get revenge. No doubt they were exultant seeing our weakened squad, which at this point was down to 10 players as compared to their 15 players. 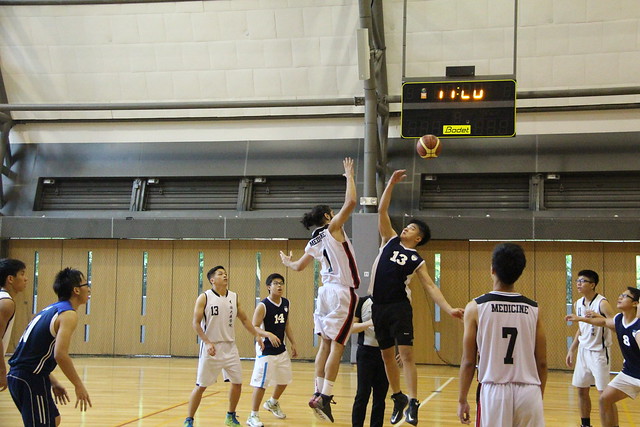 We won the Tip-Off again.

The tension was palpable as from the start as every ball was fought for and every shot contested. This led to one of the medicine players being injured early on and being carried off the court. You Xiang scored opened the scoring early on in this game with a lay up from a fast break. Medicine then made a three pointer and You Xiang replied with one of his own. 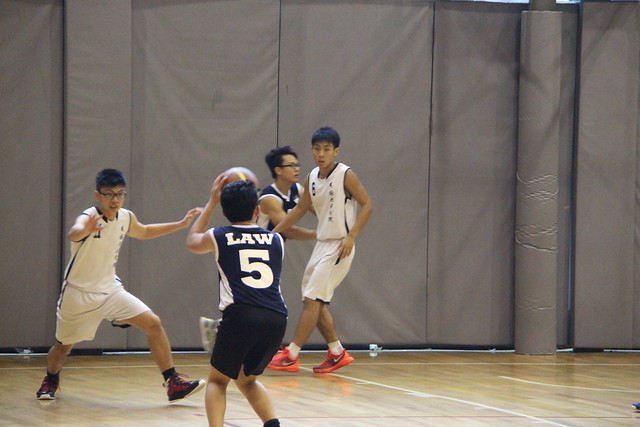 You Xiang dropping a 3 ball.

As one medicine player stopped the game to tie his shoelace the silence was deafening reflecting the seriousness of the game. The game was tied at 7 all after a layup from freshman Jun Chong. 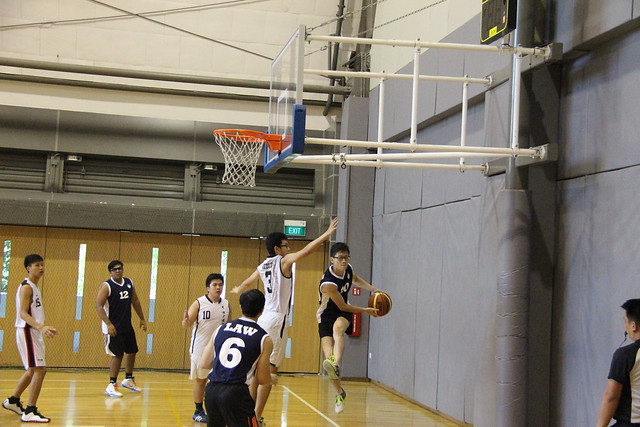 Here he is showing a creative pass.

The team kept pressing though collecting rebounds and sparking fast breaks that unfortunately we couldn’t finish. At one point the ball hit off the backboard, swirled round the middle of the hoop flirting with the net but then bounced out, eliciting screams of “How is that even possible?” At half time Vice-captain Kenneth reiterated the need to box out and not rush through the passes. 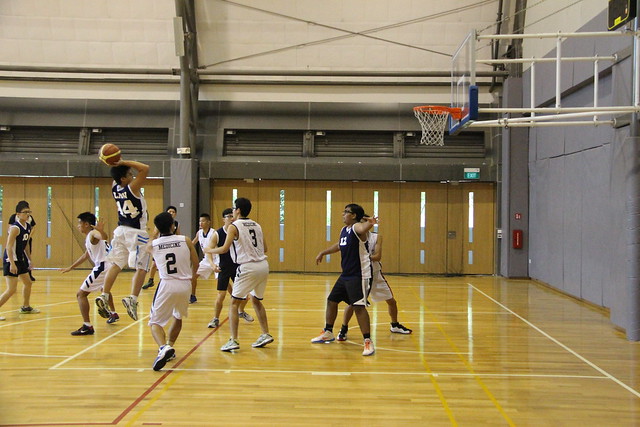 Kenneth rising up for the jumper.

As the game progressed it was getting harder for our players to keep their energy level up as Medicine was consistently rotating their team allowing their players to rest while we were forced to make our team play more minutes. This, combined with more of the same insufferable luck we had in the first half, meant that we were unable to score any more points. This loss was a bitter pill to swallow but now, the prospect of beating Medicine in the Law-Med games will be even sweeter.

The last game was against the Faculty of Business, last years Champions. This was a classic underdog story. David v Goliath. Rocky v Creed.The champions, facing off against a team that was both fatigued and shorthanded. We had lost all three of our previous games and it seemed inevitable that we were going to lose this one too. But when the chips were down and our backs were against the wall, this group of fighters rose to the challenge admirably. Emboldened by the late arrival of our centre Dillon, and watched by a packed hall, the team decided to go out fighting. We started strong and the business team countered by applying full court pressure. From the second the ball was inbounded the business players were stuck on our team like glue. The addition of Dillon created opportunities to score through the block as well as added shot blocking ability to the team. Expecting a dominant display from the Engineering team I was pleasantly surprised with the grit and toughness shown by our team.

Josiah grabbed rebound after rebound and Eugene dived and tussled with business players for the ball. You Xiang dropped a three pointer and soon after Josiah was fouled and split the free throws. 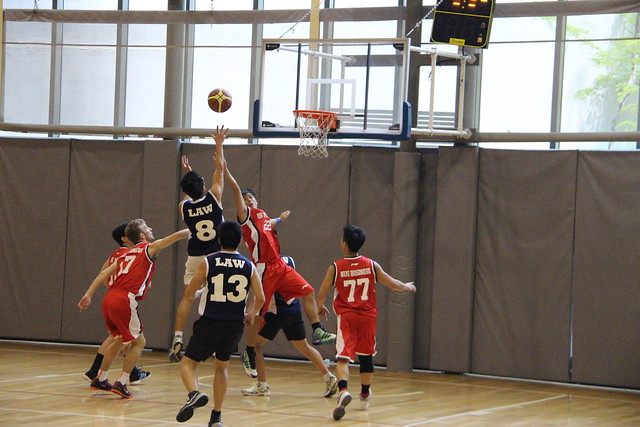 Josiah attempting a floater before he was fouled.

There was excitement in the air as we were leading and if we held on to this lead we could pull off the upset of the tournament. Soon, Business responded with a three pointer after a rather impressive series of passes. Building on their momentum the business players knocked down two more three pointers and a floater to close out the first half. Exhausted, the team was fighting to get back into the game. Once again the opposing team’s depth forced us to face fresh players with tired legs. In the second half, the team limited the Business players to just 8 points with some impressive defensive plays. HUSTLE was the name of this game. Josiah then drew a foul with a floater and split the resulting free throws. The defence then translated into offense as a steal led to a fast break with Rashpal finishing the layup. In the last few minutes the business players started double teaming whoever had the ball trying to prevent a comeback of any kind because if they beat us they would remain undefeated in the group stages. Trying so hard in fact, that they elbowed Captain You Xiang in the face, possibly twice, in a struggle for the ball. Dazed, he tried to carry on but a medical time out was called and he sat down blood pouring down his face. 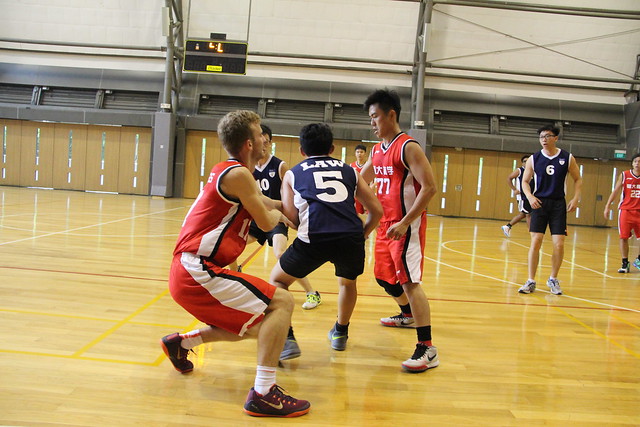 The double team that drew blood.

With their leader out, the team tried valiantly to fight back but the business team used their bigger squad and overwhelmed us in the dying minutes to secure a win.

No doubt with a complete squad we could have mounted a stronger challenge but what was achieved with the resources available is commendable and I salute the team for their Never Say Die attitude. Come Law-Med games, the team will be looking to achieve a 3-peat, and I wish them all the best. 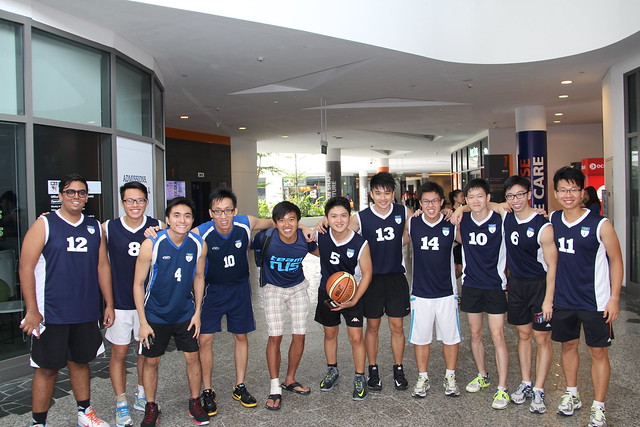