­­­­­­It was a beautiful day on the 6th of September 2015. Sadly this wasn’t exactly pertinent information for our Law Reversi team, who stayed indoors to play practically nine hours worth of matches against other faculties in NUS.

Despite the air-conditioning (perks of playing indoor games), there was a fiery aura through the room from a mixture of anticipation, excitement, and the desire to win. Players were recalling strategies, worrying about the potential traps and discussing how to bypass them, sharing tips with friends… or catching up on last minute homework. There may not be much physical activity involved in the game, apart from the panicky smacking of timers, but there was certainly a lot of mental exercise at work. In that sense, Reversi is a type of tabletop war, where the survivors aren’t necessarily the fittest, but definitely the brightest. 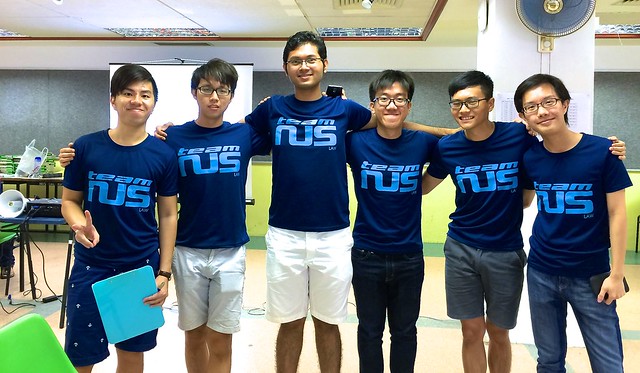 Our Law team, comprised of clever, cheerful guys, managed to hold their own and kept each other’s spirits up with witty jokes throughout the day. While waiting for members of other faculties to arrive (some of them probably hadn’t had their coffee fix yet), there were a few doubts among our team as to the likelihoods of success this year, especially after seeing the competition they had to face. Nonetheless, they came to the unanimous decision to have fun, try their best, and make new friends.

The rules of Reversi are simple. For those unversed in the rules, here is a quick run-down: each round has four players from each faculty verse four opponents from another faculty in individual games. The player with the most squares of their colour (black or white) wins the game. When all games are finished, the wins and losses of each game are combined into a group score. The faculty with most wins got one point. If there was a tie, both teams would get 0.5 points.

After an austere delivery of the basic rules and illegal moves (what is the definition of illegal?) behind Reversi, each round was duly prepared, and the games began. Immediately, our Law team faced the accomplished Yale-NUS team. Maybe it was because of Yale-NUS’s numerous practice sessions, or our team was warming up, we lost the first round of games. 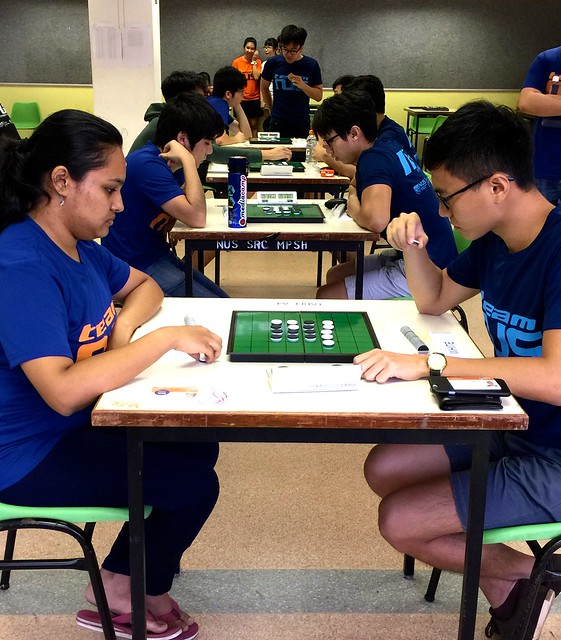 Right around the corner however were the matches against the School of Design and Environment, in which our team prevailed with victorious grins and ego boosts all around. 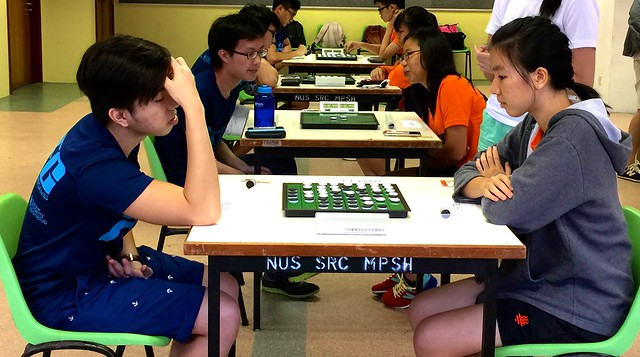 Felix does an unnecessary facepalm — Little does he know the game ends in a tie.

This victory was short lived as Law faced a narrow defeat from Computing, with single digit margins. To be fair, law deals with a lot more grey areas than Computing, who deals largely with black and white… and blue screens. 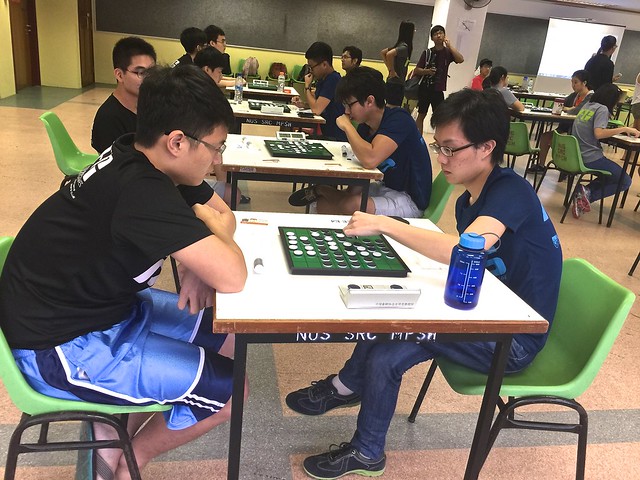 Wei Shee has managed to grab the attention of not only his Computing opponent, but Guang Yi’s as well.

After a short break and extremely healthy lunch of Domino’s Pizzas, the team was paired against Dentistry. Unlike last year however, Law was victorious, and won against them, adding one point to their overall score. Unfortunately, their next opponents were the friendly, but well versed Art faculty. Law lost the round, and as if to rub salt into their wounds, they had to play against the Engineering department next, a team that had gotten nothing but wins thus far in the competition. Needless to say, they were crushed in the grueling round. 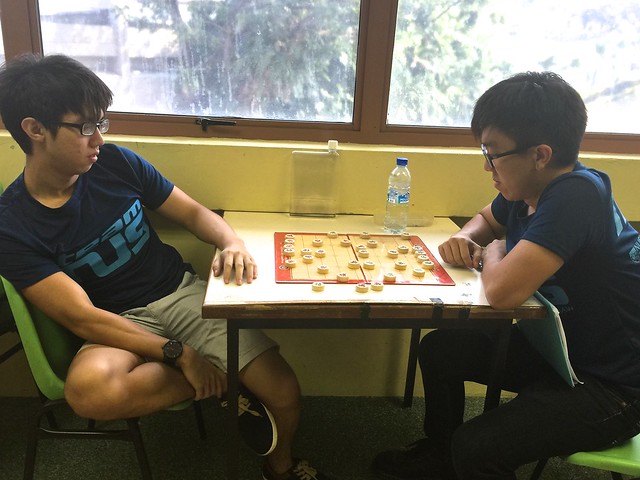 Even during breaks, Guang Yi and Erwin “relax” by playing rounds of Chinese chess.

This losing streak was probably what motivated our team to try harder the next round Against the Business faculty one of our players, Zamiq, managed to win a 64-0 game under two minutes, something he proudly said to be “a record in IFG Reversi history”. The other members also battled fiercely, and the team managed to draw with Business in that round. 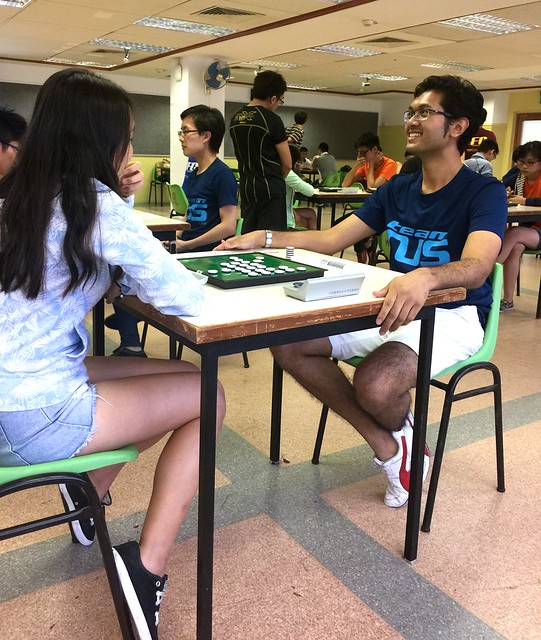 Zamiq smiles triumphantly after he wins.

It was around this time where there was a little bit of drama between two of the other faculties involving flying accusations and timers (remember panicky smacking?) Who knew Reversi could be such an emotional sport? Our team wondered if they would finally get to show their years worth of studying law and got ready to start representing clients, but the problem was resolved amicably when the teams realised they had other games to focus on.

Perhaps it was due to the delay from the dispute, and our players were running out of steam after many hours of Reversi matches, the next games’ results weren’t outstanding. Science and USP defeated our team, though we did manage to draw against Medicine, probably out of rivalry’s sake that we managed one last spurt of mental energy. At the end of the day, Law finished ninth place out of eleven, with 3/10 points (2 wins, 2 draws, 6 losses).

Our team this year did not perform as well as they did last year, but the important thing was they stayed true to their goals: they had fun, did their best, and made new friends. It may not have been the best running Law has shown in their years of IFG Reversi, but it was one that ended with laughter, Facebook friend requests, and amazing group photos. 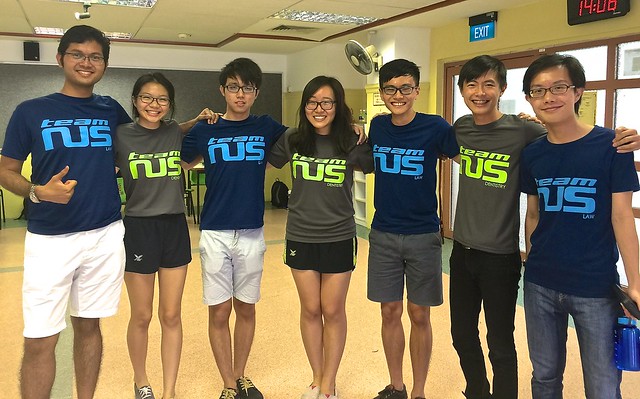