If you like men with long sticks and high socks, you should’ve been at the Floorball match for the inter-faculty games today. Our boys were beyond amazing — they lost none of the matches. (They also won none, but it was a valiant battle anyway.)

The match was a fast-paced one, with the boys flying across the court at top speed. If you don’t know, floorball is a pretty violent sport, with a lot of hustling and scuffling for the ball — today’s match was so violent that at one point, the goal post was knocked right over. (Also I overheard one of the match officials nonchalantly saying, “hey dude somebody just broke a thumb”; which was fairly disconcerting.) Both teams put up a good effort, sending multiple shots all close to entering the goalpost. However, Team Law’s Hijazi (Y4) put up a solid defence, deflecting attacks from Team Engine.

Engine scored the first goal about 7 minutes into the game. Not be deterred, our boys caught up less than a minute after, with Aniket Top Scorer Pai skillfully scoring the equalizer. (Aniket was the top scorer for the day, with a grand total of one goal.) Here we have Captain Zaki (with his henchman Aniket) eavesdropping on the other team’s strategy.

For the second match of the day, we were up against our arch-nemesis — Medicine. John (Y4) started off the game with a strong attack, peppering the Medicine goal with multiple shots, which all unfortunately, bounced off the board. (There’s a giant board blocking the goalpost in lieu of a human goalkeeper. I really don’t know how anyone manages to score with that thing in the way.) Medicine fought back, but an impenetrable defence put up by Ben ‘Charming’ Chin (Y2) and Hijazi ensured that Medicine did not score. Tension was high with a lot of flailing sticks, flying balls, and falling humans (based on my calculations, an average of four people fall down in a single floorball match). Terence “Black Mamba” De Silva refuels on a sandwich before the next match.

The team was nervous for this match — they had to win this one in order to advance to the semi-finals. Motivated by this, the team entered the arena with palpable energy. Our boys had a strong attack, keeping the ball around Science’s goal most of the time. When Science managed to get the ball, Team Law’s resident hotshot Terence (Y2), with his tiny stature, was able to maneuver between the opponent’s legs and casually snatch the ball from them.

While the team made multiple attempts to score, the aforementioned massive board in front of the goalpost literally stood between them and victory. The final score was a tie, which certainly dismayed the boys.

“Guys this is the game that will make or break the Justified article.” — Nigel (Y4), encouraging his team mates to score goals in the match

Despite being unable to advance to the next round, our boys were still sporting and enthusiastic as they faced Yale NUS in the last match of the day. At some point, a penalty was awarded to Yale NUS, earning Law a free hit. Seasoned player John stepped up to take the penalty with a powerful shot — which unfortunately hit the accursed goalpost board and bounced away. The game ended with a tie for the fourth time today. Despite not qualifying for semi-finals, the boys were in good spirits as they cheerfully said “we lost zero matches!”

Overall, it was a wonderful effort put forth by all the Floorball team members today. 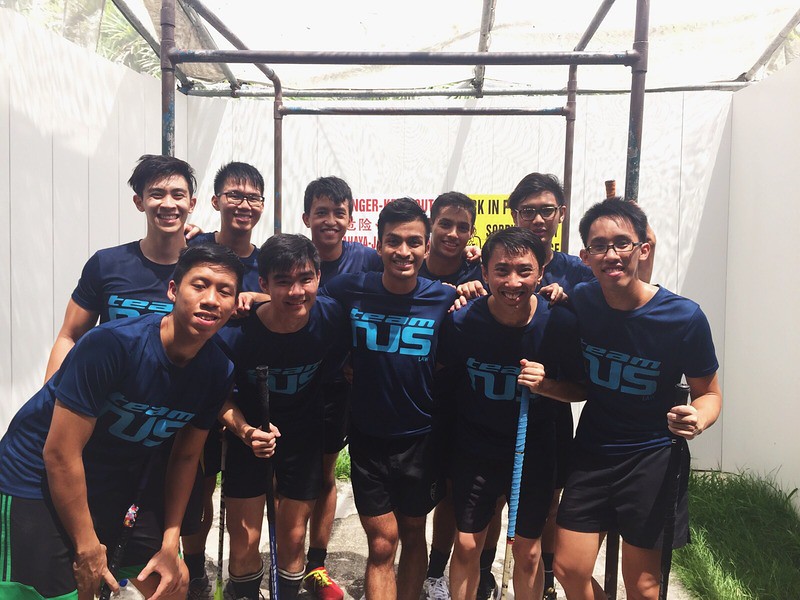