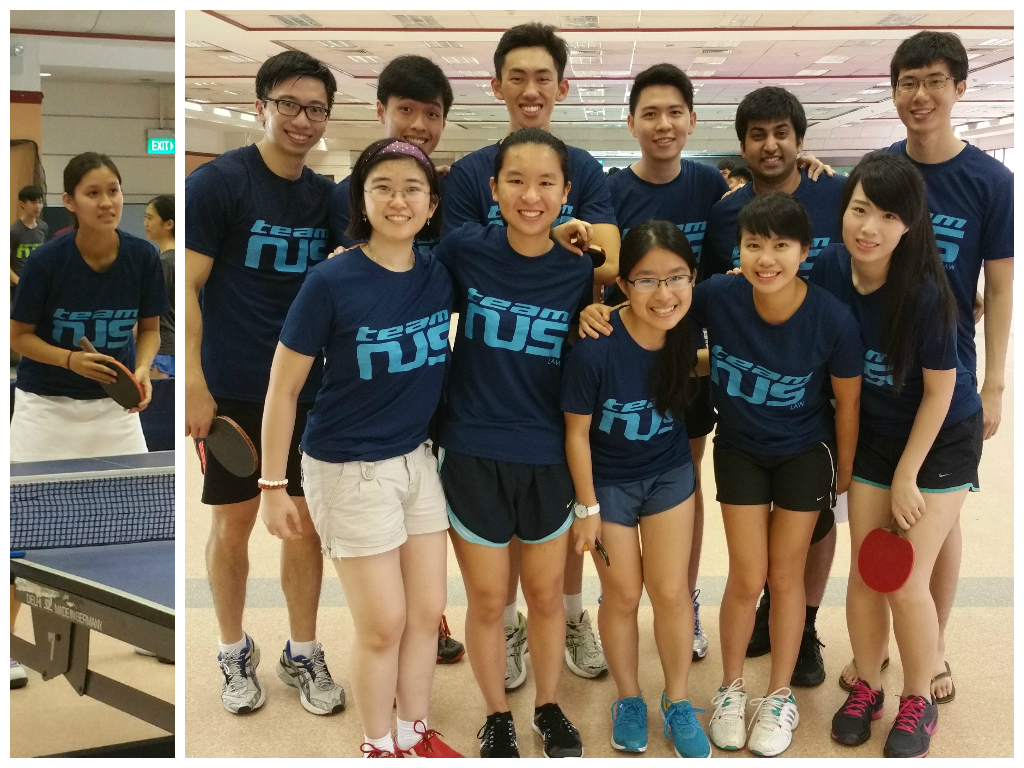 Table Tennis Team Law was composed of a fine assortment of table tennis players, each with their own specialties and styles. Last year’s table tennis titans Ben and Mark were unable to play this year, Ben because he is part of the NUS team and Mark because of injury. However they were nonetheless involved in the team as Managers, alongside Ashley as our Captain.

While last year’s heavyweights could not be fielded, Law did have other tricks up its sleeve. Jenil was a hidden table tennis talent who joined us this year, and we were awestruck by his skills. Evidently other faculties were equally shocked when their players had to face him across the table. From opening serves darting in the unexpected directions, to swiftly and precisely executed smashes that clinched victory for Law in the Men’s Singles, Jenil was unperturbed and defeated his opponents with ease. 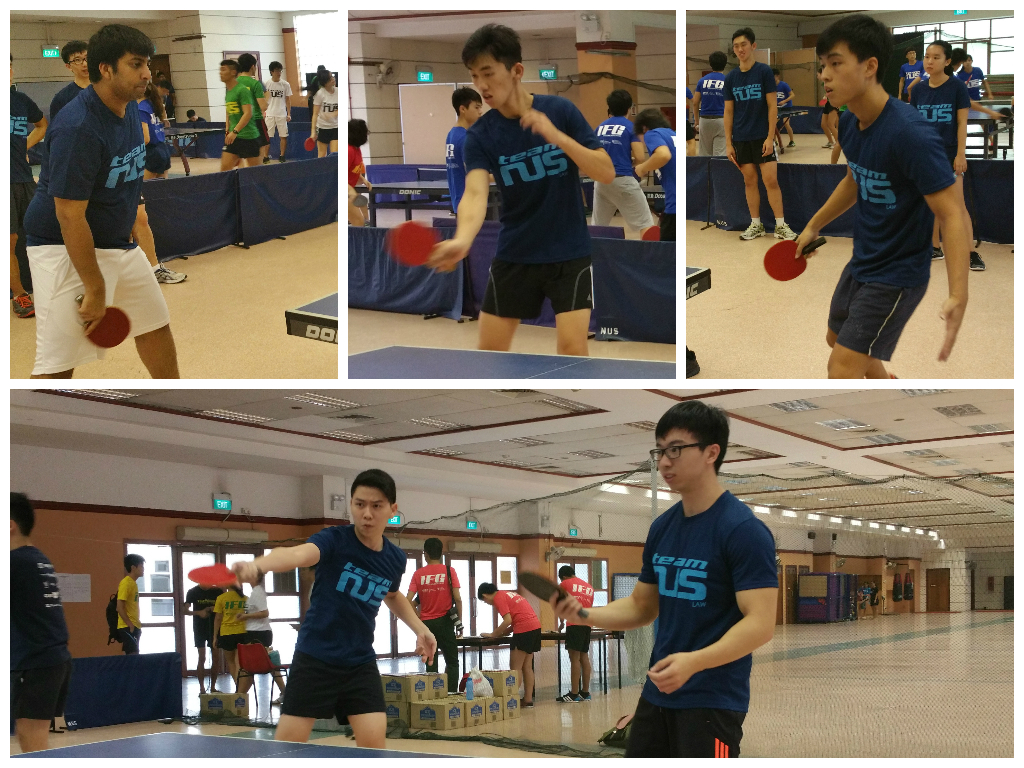 Apart from Jenil’s successful conquest of all Men’s Singles matches, Team Law had another triumph to celebrate. In our match against Yale, we cleanly pulled the rug out from beneath our adversary’s feet. In all five matches, Men’s Singles, Ladies’ Singles, Men’s Doubles, Ladies’ Doubles, and Mixed Doubles, Team Law was victorious. It was the high point of our day’s exertions. 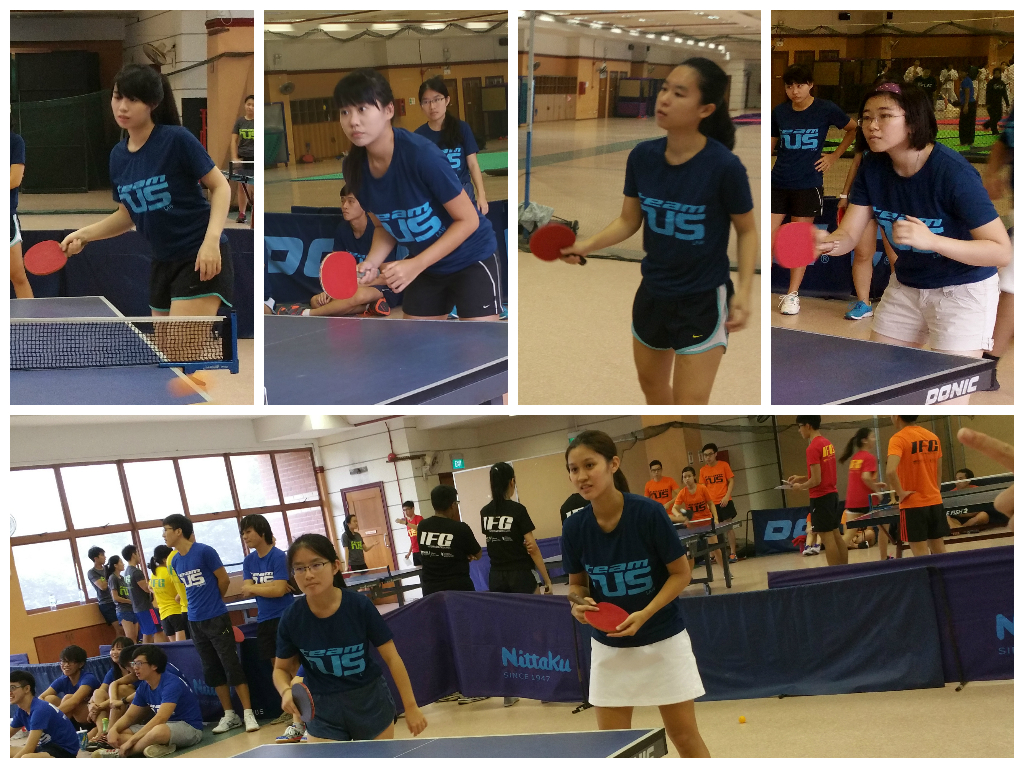 Unfortunately, despite our efforts and some accomplishments, Team Law did not make it to the semi finals. Success against another faculty is determined by winning at least three of the five “types” of matches. Though we won Yale with a clean sweep of 5:0, we lost 1:4 to the fiercely aggressive players of Science, FASS and Business. 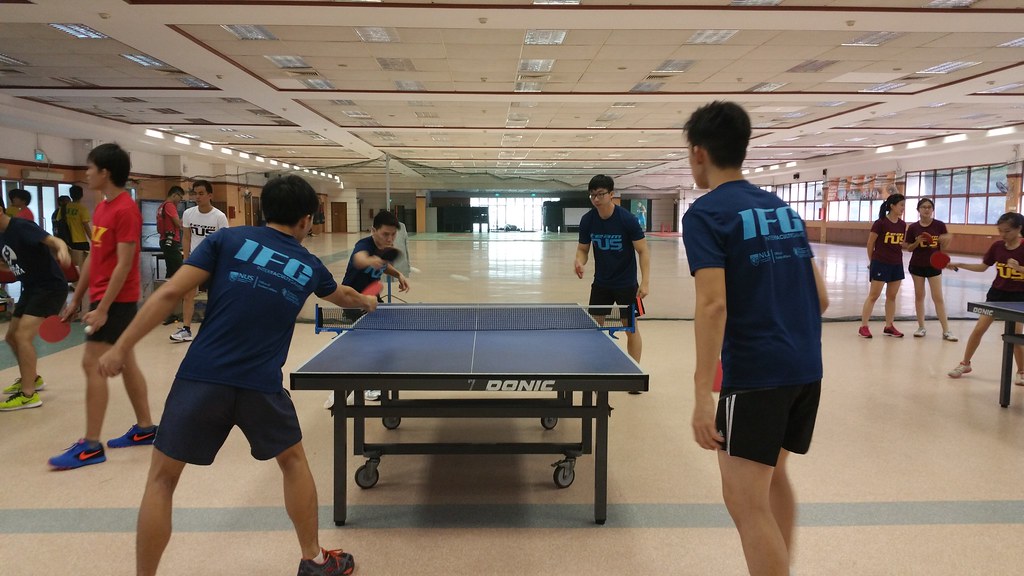 During the warm ups, it became apparent to us that both FASS and Business would be forces to reckon with. Decked out in Green for FASS and Red for Business, their players hit their strokes with a consistency and rhythm of experts during the warmups. They did not fail to follow up their impressive demonstrations with killer opening serves and unreservedly hostile hits during the match itself. While Team Law players pulled off several reasonably impressive stunts during our own warm ups among ourselves, we did not have the opportunity to do the same when faced with perfect spins delivered under the hands of experts. Many of our ranks were beaten as we lunged frivolously after opportunistic smashes to weakly guarded corners, or in misinterpreting deceptive opening serves that looked like cuts (ball with a downward spin) but were actually topspins.

A fight for Honour

By the second half of the day’s matches, we knew that with the exception of Men’s Singles, we would be on a losing streak. As we played with FASS, our Ladies Singles, Men and Ladies’ Doubles, as well as Mixed Doubles were badly hit. We toyed with the idea of simply abandoning the next match with Business and letting them have a walkover instead. The attractions of that approach was that the entire team could go home early.

In the course of discussions however, these negative thoughts were dispelled. It was finally decided that we would stay and fight. No matter how hard it is, we would not give Business a free win in table tennis. They would have to wrestle it from us.

Against Business, Men’s Singles won under the watchful eyes and experienced hand of Jenil, as always. However, other factions did not come out unscathed. We lost Ladies’ Singles, Men’s Doubles, Ladies’ Doubles as well as Mixed Doubles. Despite the bleak outcome, there was one match that must be mentioned even if we did not win because we were just so close. That match was Mixed Doubles.

Hannah and Junwei representing Law in the fight against Business

Hannah and Junwei playing Mixed Doubles had put up an admirably spirited resistance against the likes of Business. Although the first match in a best-of-three had been lost, the second match had raised our hopes as the points for Law climbed higher and higher. Our worthy players gave it their all, successfully pulling off perfectly executed tricks and strategies in a bid to win. Looking at the improving performance of our players in the second match, we felt a growing sense of confidence that there was real possibility that Law would make a comeback in Mixed Doubles and win. Alas, the game hit a 10-10 Deuce, and it then became a race to attain a 2 point advantage. The audience from Team Law held their breath. Law fought hard, reaching 12 points before Business rebounded and clinched the game at 14 points. Though we had lost, we nonetheless applauded the players for an exceptionally excellent defence against an unduly oppressive opponent.

Although Team Law did not make it to the semi finals, we all carried away with us the experience of a memorable day. While law might have been disadvantaged relative to the aggressive and relentless strikes of fiercer opponents, we nonetheless stood our ground and elicited some reason to celebrate. Our members had nobly struggled against adversaries they knew they could not win, but they found happiness in gaining reasonably good scores before the game was lost. All in all, this was a day not to be missed for the Table Tennis Team. We will return to fight another day!