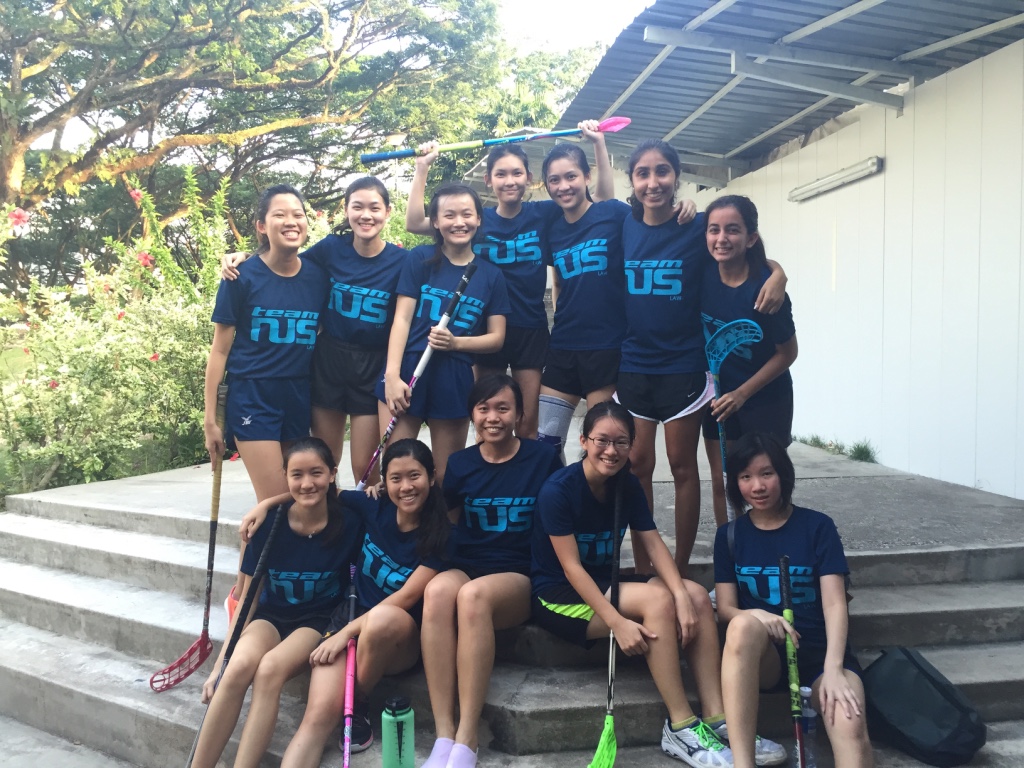 Go hard or go home – it was hardly a bed of roses for our floorball girls today who were up against swift opponents (who successfully managed to give this writer a headache from following the movements through a tiny screen). Yet, it was an enjoyable and heartening match that moved many (or just my) hearts as Team Law put up a valiant fight with an inner fire that only burned brighter and stronger as the day went on. Our girls went hard, played hard and the final scores serve as a proud testament to their commendable dedication.

Our girls had a slight advantage in this match as a few of the players from Yale-NUS seemed to be new to the sport. Nevertheless, Yale-NUS formed a resilient team and gave their all, down to the last second. Our girls eventually came out tops even though there were a few gaps in their cohesion and teamwork. Lapses in communication at critical intervals in the team would prove detrimental in the following matches against stronger opponents. Even so, the team pulled through admirably with a score of 4 goals in 9 minutes. Xuekun (Year 4) scored the first goal of the day, her record followed shortly by Anmol (Year 1). Xuekun rose to the occasion once more and scored the third goal of the match. 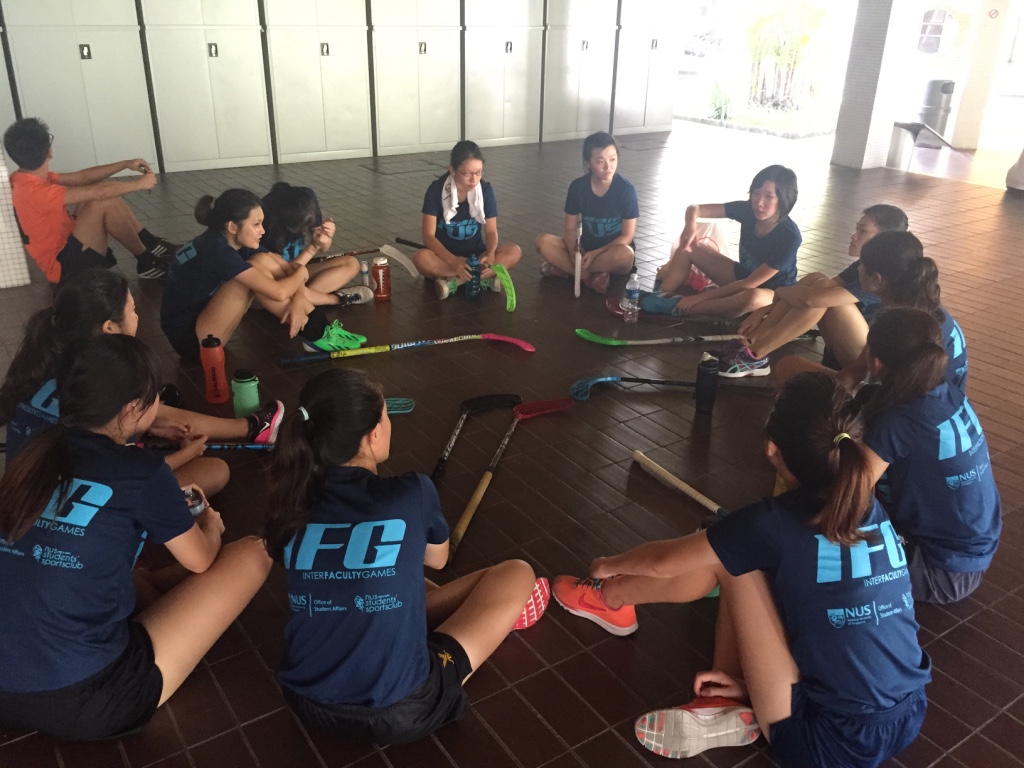 Our girls sharing and reflecting on the game, intently discussing strategy and tactics for the upcoming one.

Next up was Science, the strongest contender in the group, having triumphed over all the other faculties thus far. The players from Science were quick on their feet, in terms of both speed and decision-making. Our girls refused to let the game go without giving it their best shot and stepped up their game, playing at Science’s pace and focusing on ramping up the defences. There was, unfortunately, little opportunity for any of our players to seize on openings and attack, which ultimately resulted in our loss. On a more positive and encouraging note, this experience proved to be beneficial and instrumental in sharpening the skills of our newer players, especially the first years, who have never experienced the intensity of the game before. Our defenders Jean (Year 3) and Maria (Year 3) get a special mention for having guarded the goal fiercely and preventing the other team from scoring numerous times. Maria, in particular, was plagued by an injured knee but fulfilled her job as the last man above and beyond expectations.

This was a game for Law because we had to win this game if we were to have a shot at getting into the semi-finals. The game was a close call as with both our girls and the Arts girls going neck to neck for the ball. There was an attempt at a far shot from the center of the court by Sharon (Year 2) and Anmol, as a screener, assisted and hit the ball in. We were leading by one point and the atmosphere was tense with anticipation and adrenaline. The forwards, however, then became confused as to line substitution and in the heat and confusion of the game, our team committed a foul by having 6 players on court. Arts landed the free shot, equalising the score. Maria, once again playing her best as last man, accidentally fell onto both knees as her legs gave in in an attempt to block a shot. Having both knees on the ground was another foul and Arts put in another goal with their free hit. Our defenders played extremely skilfully this game and made sure not to hand the goals over to our opponents readily. It was a match with emotions running high on both sides and despite our loss, the girls did not lose faith and proceeded to give all they had left for the next match. 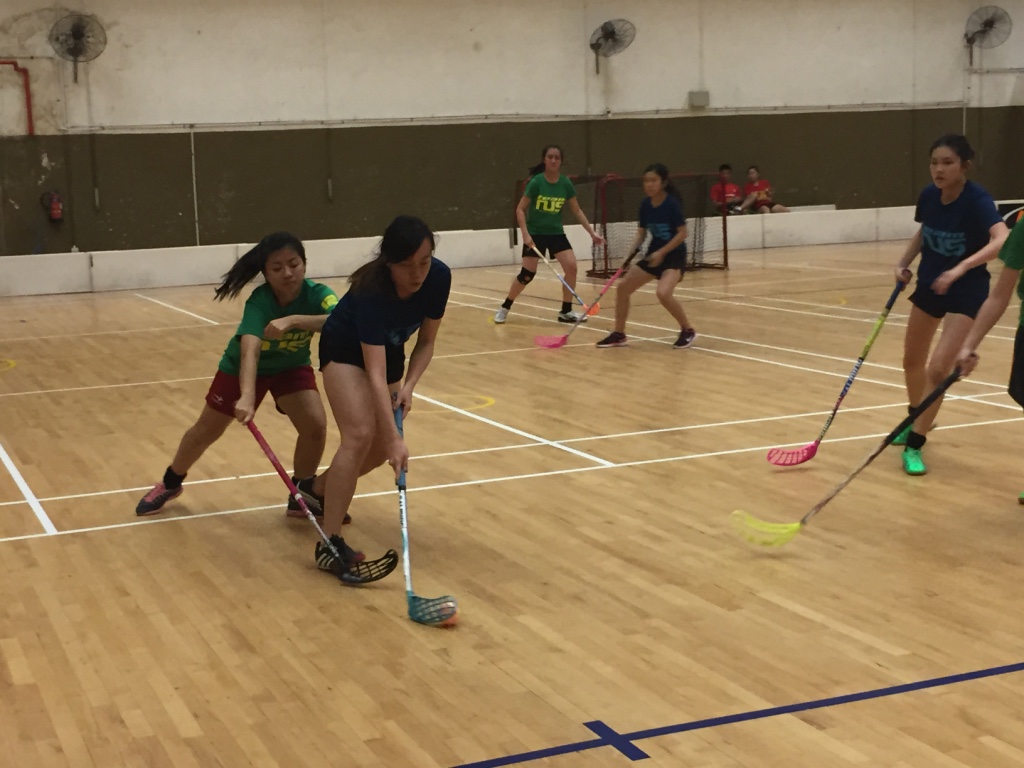 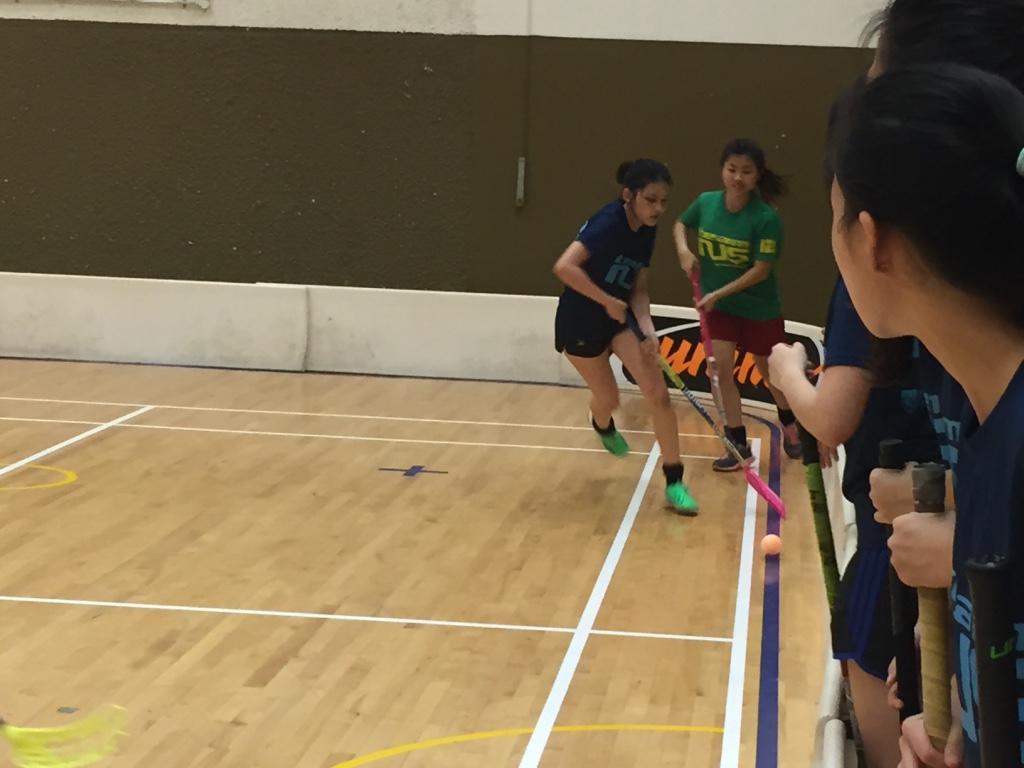 Sim Hong was aggressive and quick, leaving no room open for her opponents to break her path. On the left is LIANG FANG LING (‘TRAITOR’) ELISABETH, who happily abandoned the USP faculty and played for Law instead. Kudos to Fang Ling for her true sense of loyalty!

This final game was not an important match as our girls knew they, having accumulated insufficient points, would not make it to the semi-finals. Yet, Maria, or “The Great Wall of Maria”, as the team so affectionately named her, firmly asserted, “We did not fight so hard just to give all this up and lose our drive in the last match.” Xuekun once more displayed her expertise at the game by scoring the first goal. Sim Hong (Year 1) scored another direct shot with an assist from Xuekun, who passed the ball to the center to Sim Hong. Our defender Jean was formidable in defending the goal, especially when Business pressed up high at the end. She also managed to send the ball far away to the other half of the court innumerable times, knocking back and defeating Business’ aggressive attack strategy. It was a game where everyone cheered their hearts out but also held their breaths in anticipation and ultimately, the team certainly stayed true to Maria’s words and ended the day on a sweet note, rising again from their losses and triumphing over Business with a score of 3:2. 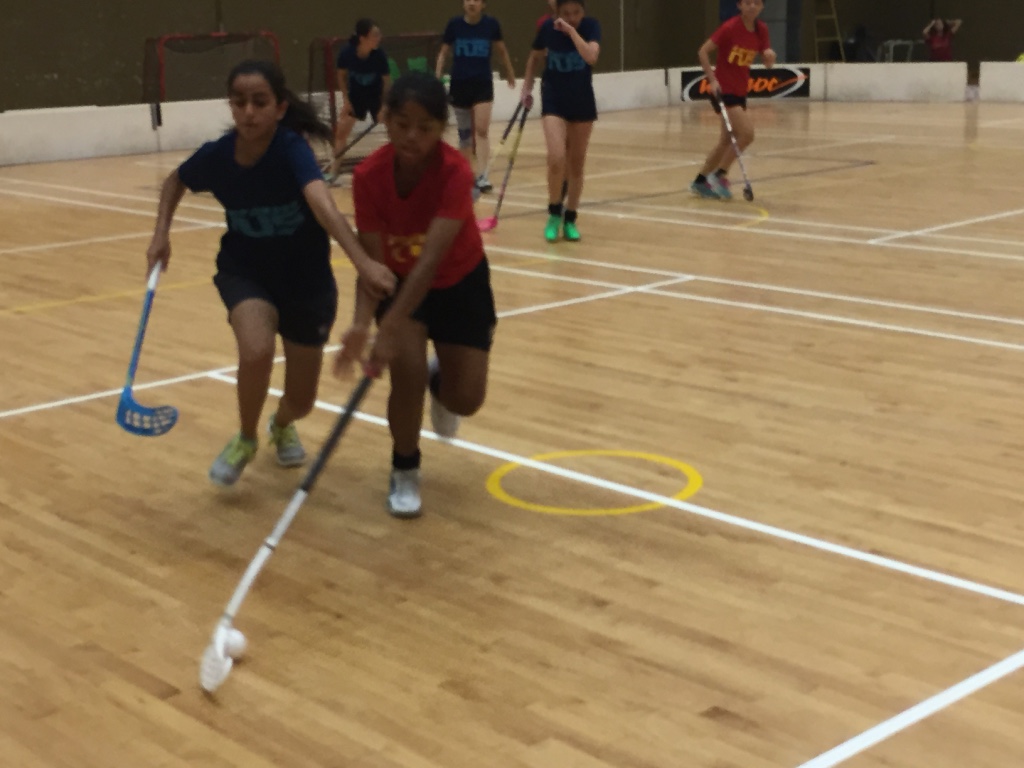 Uma (Year 1) skilfully intercepting the ball from a Business player. 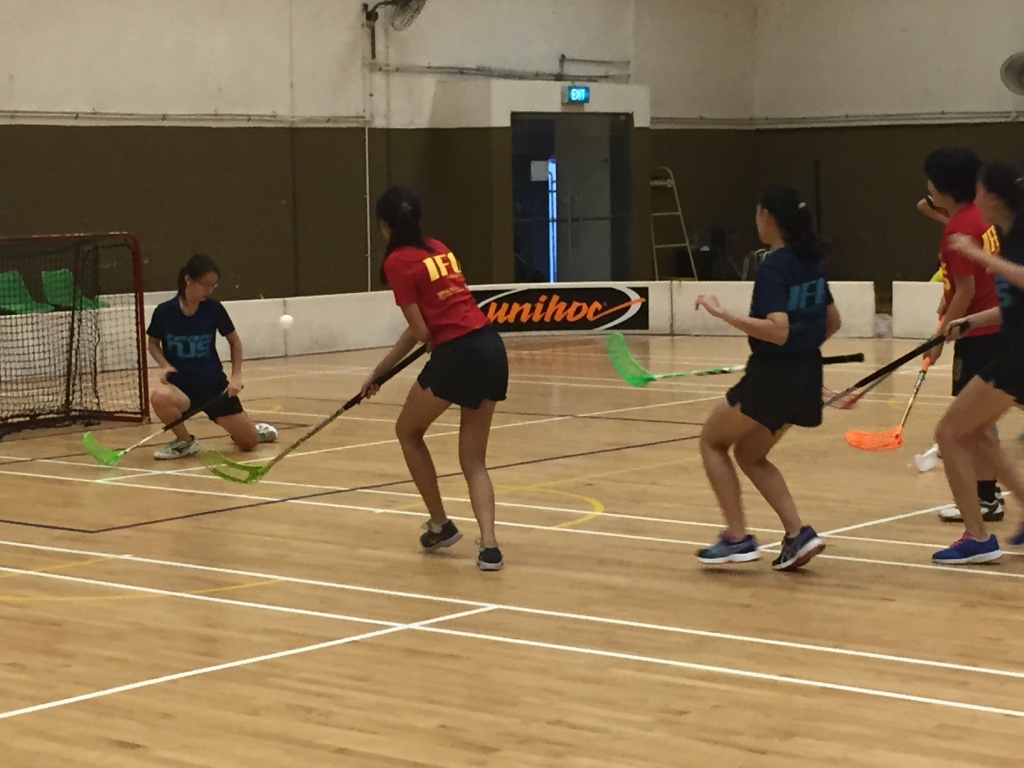 Jean blocking one of many goals during the course of the game.