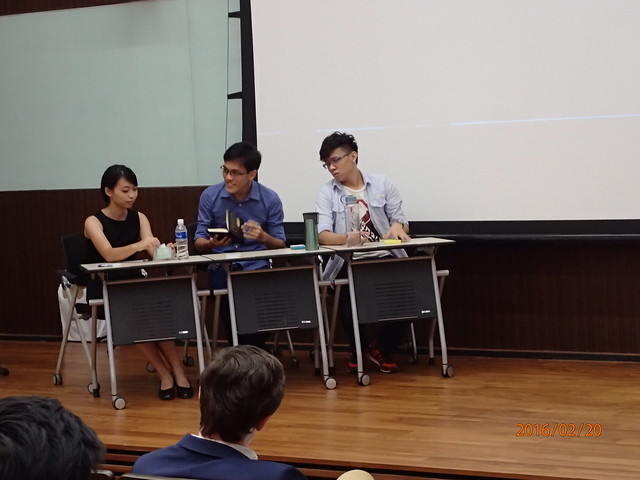 Team Medicine having their final deliberations before the debate commences. From left to right: Glenys, Jeremy, Timothy.

During the Closing Ceremony of the Med-Law Games 2016, a most provocative statement was debated, ie “THIS HOUSE BELIEVES THAT DONALD TRUMP WILL MAKE A BETTER DOCTOR THAN LAWYER”. The Medicine Team supported the motion while the Law Team opposed it. 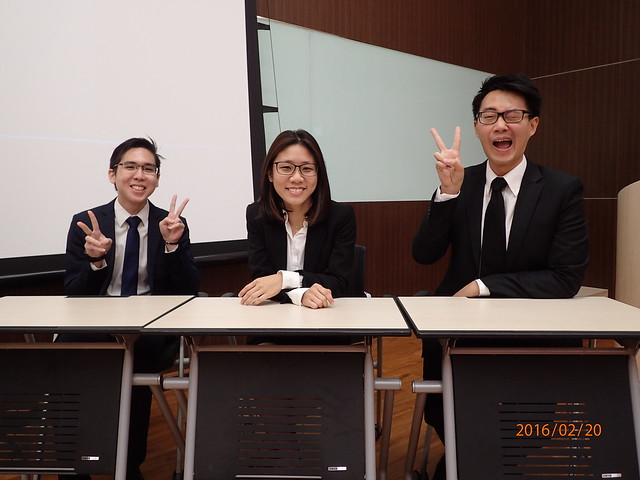 Given that the debate revolved around which profession would better suit Mr Trump, the debate may at first blush seem to require aggrandisation of the Team’s profession. However, as Meiyi (GLB Y2) aptly put mrt, the debates turned out to be “self-flagellatory”. As pointed out by Mr Simonas Bartulis (one of the three judges of the debates), the debaters ended up discussing which profession Mr Trump would cause more harm to.

The first speaker for Medicine, Glenys, introduced a common theme of her Team’s assertion, that the medical profession was so highly regulated that it would be able to “straightjacket” Mr Trump. She also asserted that Mr Trump had many traits that could be more suitably harnessed for the good of medicine. To illustrate this, she pointed out that his extremist political views would not bode well for justice, and that his aggression would put him in good stead regarding the annihilation of pathogens. 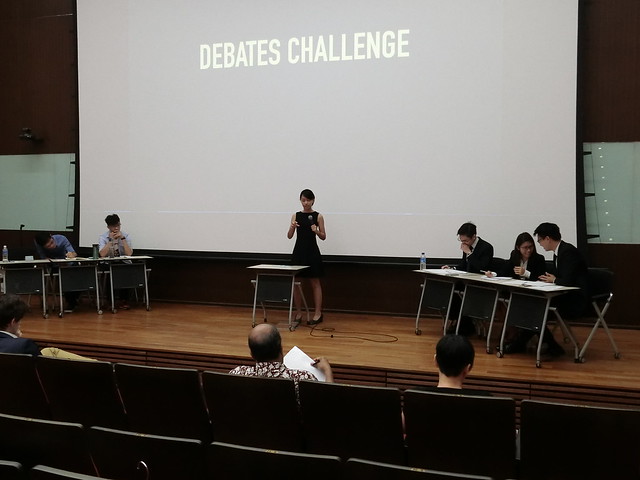 Meiyi and David seem to be more amused than concerned about Glenys’ arguments. 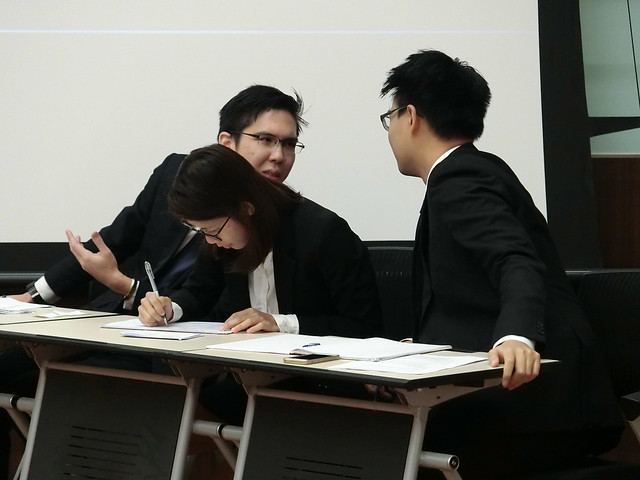 Colin and David discussing Glenys’ presentation as Meiyi lays the finishing touches on her rebuttal to Glenys.

While Glenys used the mike, an example her teammates would follow, Team Law confidently projected their voices unaided. Meiyi, leading Team Law’s rebuttal, first put things in perspective. She established Mr Trump’s character, pointing out that he is of Jew-hating German origin and thereby not the kind of person you would want as a doctor. In summary, Meiyi’s case was that Mr Trump had not the heart, mind and guts of a doctor. In response to Medicine’s ability to straightjacket Mr Trump, Meiyi drew upon her the Year 1 course content, pointing out that the Bolam test provided doctors with near legal immunity. She reasoned that lawyers are also straightjacketed since they are beholden to the Court and their clients. Meiyi submitted that the potential damage to the body that Mr Trump could inflict would outweigh the damage he could do to the Law. At this point, Team Medicine raised the objection that lawyers changed the Law. Meiyi tore down this misconception, correcting that judges change the Law. She argued that Mr Trump lacked the heart of a doctor, lacking compassion, being assertive, unfeeling and an egomaniac. She asserted that Mr Trump also lacked the mind of a doctor, playing fast with the facts and using persuasion instead of factual realities which form the basis of Medicine. Meiyi added that Mr Trump’s resolution, out of court, of a threatened suit by his ex-wife demonstrated the strategic mind of a lawyer. Lastly, Meiyi contended that Mr Trump had the guts of a lawyer rather than a doctor, being a risk taker instead of relying on experiments tampered by scientific knowledge. 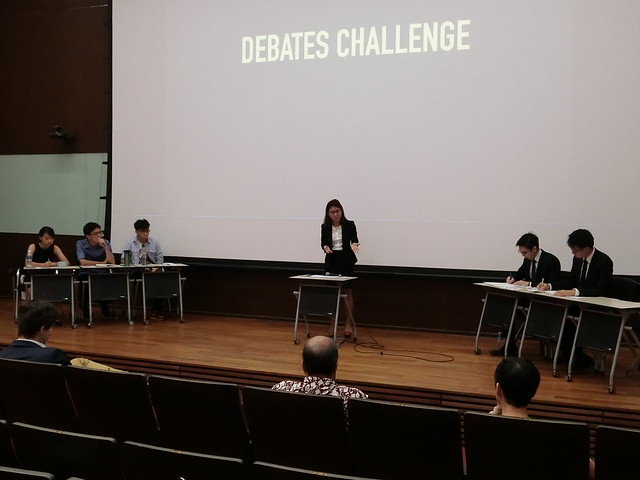 Caption: Ironically, it seems that Team Law is taking notes of Meiyi’s presentation rather than Team Medicine.

In answer to the passionate performance of Meiyi, came Team Medicine’s Jeremy’s collected response. He maintained that Mr Trump would still be dangerous as a lawyer and that the fears surrounding his potential presidency were indicative of this. Jeremy also claimed that doctors were not as objective as Team Law put them out to be, with 90% of medical research being “seriously flawed”. As unflappable as Jeremy seemed to be, perhaps a little of Team Law’s enthusiasm in wanting to submit a rebuttal got to him, for he initially waved off their request with, “I would like to take you, but not now”. Jeremy continued that Mr Trump could be freer to be condescending as doctor than as a lawyer. At this point, Team Law objected that, if the picture Jeremy was painting of the Medical profession was true, they were worried about the state of medicine. Humorously, Jeremy agreed and went on to reiterate the similarities between Mr Trump and doctors, such as that doctors were often sued, much like Mr Trump. On a more optimistic note, Jeremy noted that Mr Trump wanted to make the United States great again, which accords with a doctor’s desire for the patient to be well. To sum up, Jeremy reiterated Medicine’s stand that Mr Trump’s aggression on matters such as the ISIS was transferrable to the destruction of bacteria. 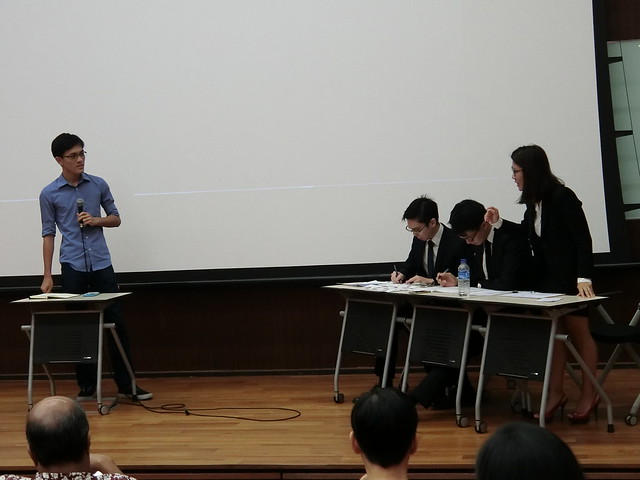 Meiyi responds to Jeremy with a fervent rebuttal. 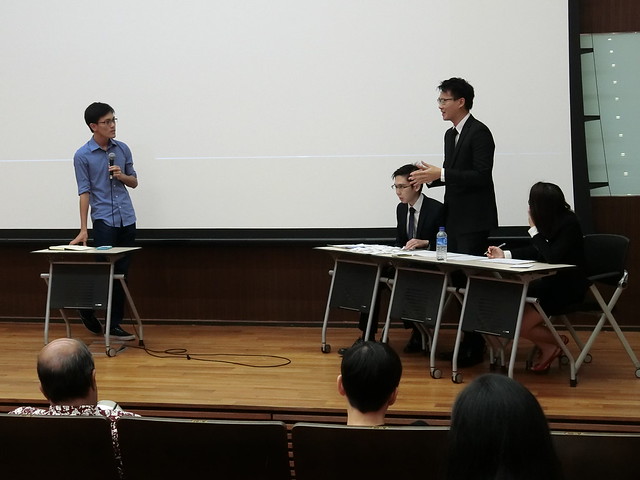 David trying to confound Jeremy, putting his legal training to good use.

Colin (LLB Y2) was clearly unimpressed by Medicine’s submissions thus far, presenting a frank rebuttal of Team Medicine’s propositions. Colin posited that Mr Trump’s lack of care would appal doctors, but not lawyers, since doctors are closer to being paragons of virtues. Team Medicine’s rebuttal was that Mr Trump believes in maintaining a healthy lifestyle and would thereby be suited to be a doctor. Colin’s surrebuttal was that Mr Trump also had strong views on the law, having been critical of Obama’s citizenship. Moving to the “heart of the debate”, Colin cited the Hippocratic oath, positing that it would be ironic if Mr Trump were to take an oath that requires doing no more harm than necessary. Colin re-emphasised Meiyi’s point that doctors’ services are more critical to life than that of lawyers. Once again, the ability of the judge to check the lawyer was highlighted. To wrap up, Colin reasoned that Mr Trump should be placed in the least damaging profession, which would be Law, since Law is the easier profession to get into. 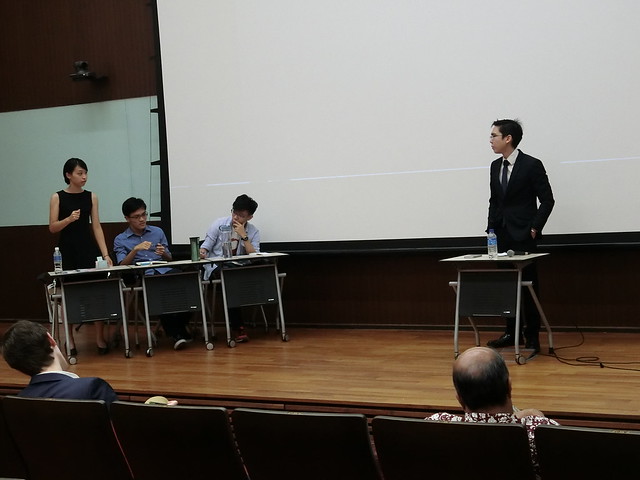 The last speaker for Team Medicine, Timothy, apparently felt the need to compensate for Team Law’s relative flamboyance. Despite being initially polite by greeting the audience, Timothy went into a heated attack on Team Law’s position, the majority of his speech comprising rebuttals to previous Team Law speakers. In response to Meiyi’s submissions, Timothy argued that doctors are more problem solvers than lawyers, and that Mr Trump had the guts to take on diseases. To refute the point that doctors are objective, Timothy clarified that doctors would save the life of a patient who had higher chance of survival. Team Law rebutted that this example proved doctors to be objective. Timothy begged to differ, opining that this example was illustrative of a subjective decision being made. In rebuttal to the second speaker, Timothy wrangled that Mr Trump, as a lawyer, could release criminals into the public. Colin readily refuted that lawyers remain beholden to authority. Timothy response was to cite Meiyi’s reasoning that Mr Trump does not listen to other people. Referring to Colin’s point that students who fail to get into Medicine may still get into Law, Timothy cheekily thanked Colin for the point and opined that this was indicative that Mr Trump should try Medicine first. In response to the point that Mr Trump is not a paragon of health, Timothy cited Mr Trump having been certified with a bill of health during his republican candidacy. 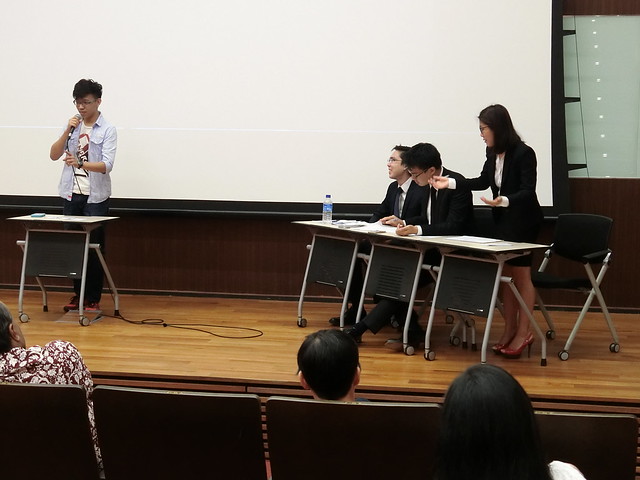 Meiyi expressing her readiness to rebut Timothy’s impassioned propositions. Colin is evidently more amused than anything else. 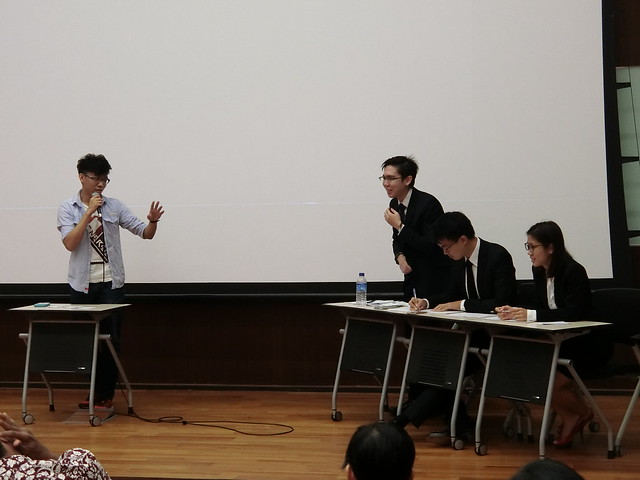 Both Colin and Timothy have such different views on the debate that they clearly find the other’s view rather entertaining.

David (LLB Y2) was the final speaker for Law, and was apparently so impressive that he was also the last speaker of the debate, with Team Medicine foregoing the option to give a final response. David found it ironic that the students of Singapore’s premier medical school had such a pessimistic perception of doctors. Regarding the medical profession’s ability to “straightjacket” Mr Trump, David perceptively underscored that nothing stands between the doctor and his scalpel from the patient on the operating table. He argued that Mr Trump’s supposedly warped sense of justice is not fatal to him joining the legal profession, for lawyers themselves are often divided on what constitutes justice. Returning to his criticism of Team Medicine’s cynicism of their own profession, David submitted that it would be more appropriate to compare Mr Trump to the best doctors and lawyers. He maintained that medicine involves following conclusive studies, and that the medical profession would be less willing to accept Mr Trump’s novel arguments, which in the legal profession could be accepted by the Court of Appeal. David cited Mr Trump’s past legal actions as evidence of his propensity for law. 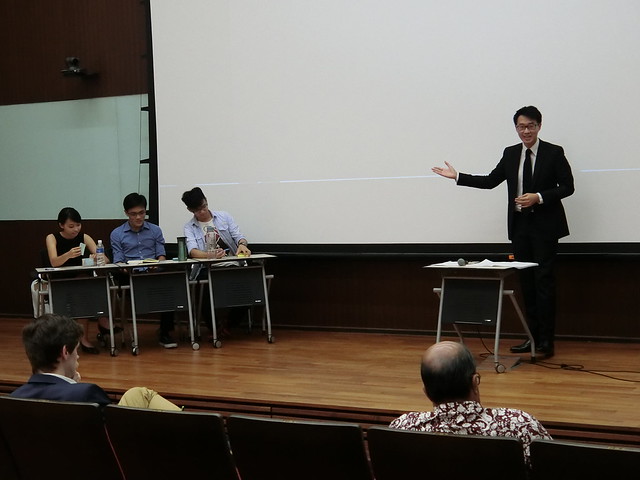 David teasing Team Medicine about their pessimistic view of doctors.

In spite of the absurdity of the debate topic, it was clear that all the participants had put their hearts into the debate. Mr Simonas Bartulis, on behalf of himself and the other judges (Professor Paul Anantharajah, and Associate Professor Eleanor Wong) rewarded them with honest feedback. The debate topic was about which profession Donald Trump’s personality sought most. On this point, Team Law won by a close margin (there was a split decision), with David being declared the best speaker. As for the side issue raised by the debaters of which profession Donald Trump would cause more harm to (which was not as relevant to the debate topic), the judges were undecided. Regardless, as voiced by Mr Bartulis, the tension between Law and Medicine, as well as the humour injected by the debaters, made for an entertaining debate. 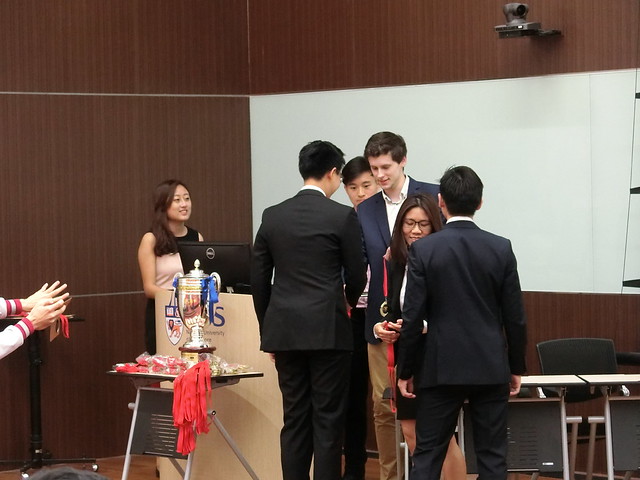 Mr Bartulis handing out the medals to the triumphant Team Law. 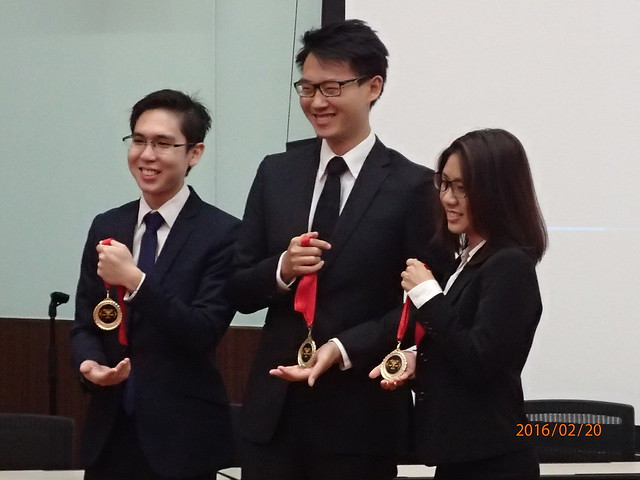