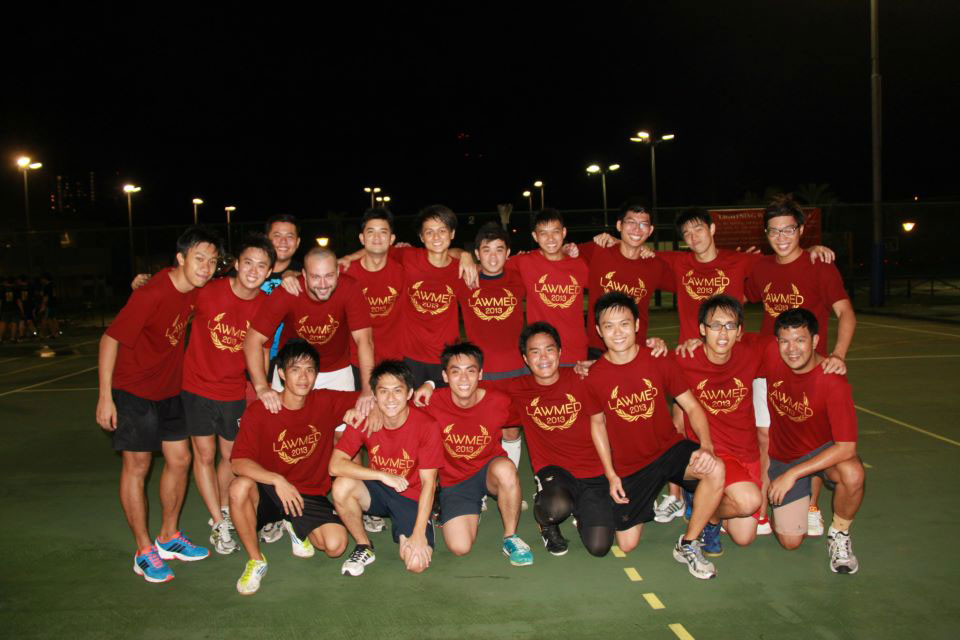 After weeks of training where almost everything that needed to be said had been said, it was finally time for our annual game with our Medicine counterparts. We had talked the talk – saying that their win over us during the Inter-Faculty Games in August was a blip for us, and that we could defend our Law-Med title without the help of our Swedish superstar Axel FÃ¤gerhall – but could we walk the walk?

My message to the team before the game was simple. While our Medicine counterparts might look at us and think they know us, what they did not know, and would never know is what we had in our hearts. On the outside, it may have appeared to them that we have two short goalkeepers, outfield players who are not as big and tall as them, and definitely no one who has represented Singapore before in a competition, but what they didn’t know is that this team is full of warriors. We had Ryan Sim (Year 1), who dislocated a shoulder and carried on training, working on his shots using his other arm. We had Alexander GalfvensjÃ¶ (Year 3 Exchange Student), who insisted on training despite having puked moments before. The list goes on, players who sprained their ankle/wrists/fingers, injured their back/knee, dealt with loss of loved ones in the family, but who remained committed to the team. There was certainly no lack of heart in this team. The pain, both literal and figurative, only served to spur us on.

And that’s exactly why, even as we slipped to a disappointing 4-1 deficit within the first 15 minutes, there was never any doubt in my mind that the team would bounce back and win the game. We were made of sterner stuff than that. I had conceded a couple of soft goals to allow Medicine to build up an early lead, but all good teams have players who cover for each other’s mistakes. In this case, Chuan Lim (Year 2) was the other goalkeeper, and he stepped right in and put in a superb performance till he was taken out by a shot to the face (a fate which would befall me as well later in the game). 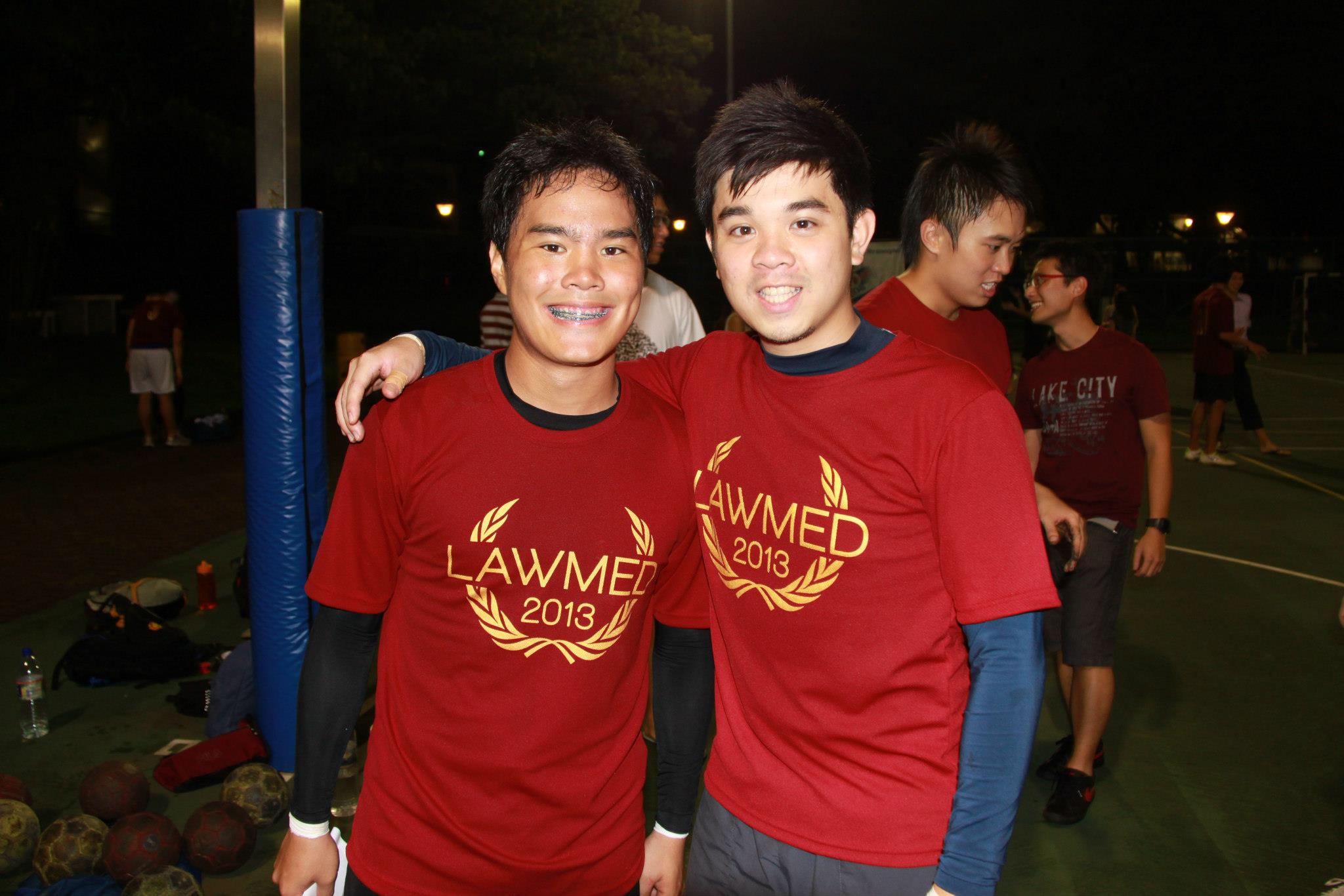 Before too long, we had levelled the scores at 4 apiece, and once we got the 5th goal, there was no looking back. We would finish the first half 7-5, and with confidence very much on a high.

The second half saw more of the same. Strong defence and a clinical attack meant that Medicine never regained the lead, and at the end of the game, the final score read 16-11. Notably, Ng Boon Gan (Year 3), Hariz Lee (Year 4) and Cheow Eng How (Year 2) each scored a bunch of goals, but credit goes to the whole team for an outstanding performance. From back to front, every player put in a really good shift, not just playing well individually, but also fighting hard for their teammates. Good discipline was also a feature of our play, as we conceded far less 2-minute suspensions than our opponents.

To sum up, it was definitely a well-deserved win, and words will never adequately describe how proud I am of this team. I am proud of them not because they won, not because they played so well, but because I know that when it comes down to the crunch, these guys will fight for me and I can rely on them to protect me. Even though I am the captain, what I really love about this team is that throughout the entire journey, there were many other leaders alongside me. The team was always eager to help each other improve by providing constructive feedback along the way, and when the going got tough on matchday, other players stepped up to the plate and led by example. There were 7 captains on the court at any one time. Finally, I would like to thank the supporters who came down. As I’ve said before many times (rather cheesily), every single supporter on the sidelines is an additional source of strength for the team. It was a wonderful feeling playing for such loud and appreciative supporters, and it really helped me to feel like I was unbeatable. I’m sure the rest of the team felt that way too.

Signing out for the last time, Hirono Eddy. 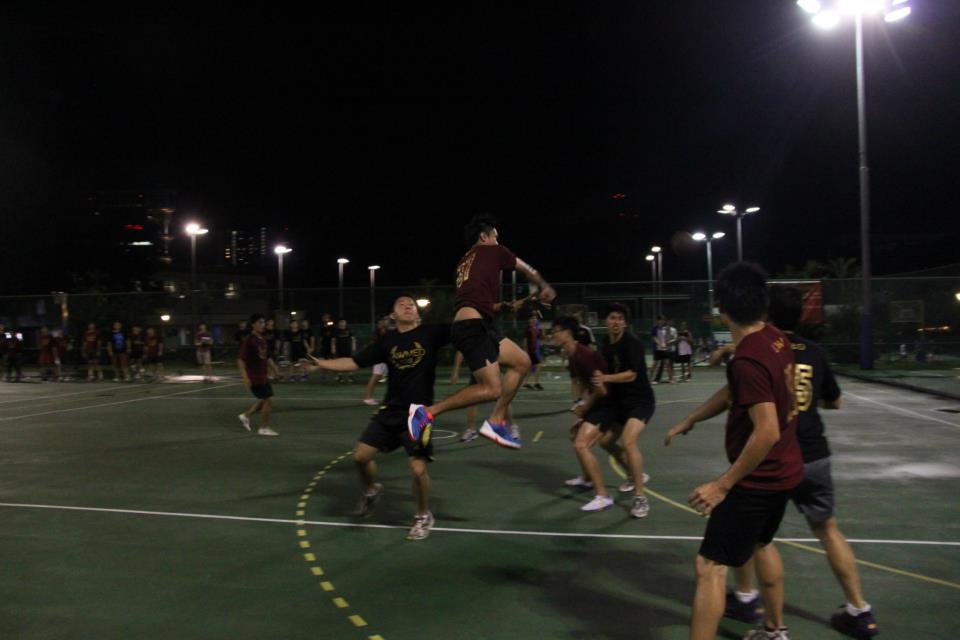 There was never any doubt that this would be a fast and furious game that would also be easy on the eyes, and it was evidenced by the great turnout of supporters. I have to admit that I was fairly surprised, as the match was at Kent Ridge, which is usually enough of an excuse for people not to turn up; but turn up they did, despite the late game time and rain that seemed to be pouring everywhere else.

Things got off to a slow start, with the team down 4-1 in a fairly short amount of time. Though there were numerous supporters, cheers were sparse and disjointed. This did not last, however. As the game progressed, the handball team showed that they were just warming up, and we were treated to incredible interceptions, superb saves and sumptuous shots that got everyone inadvertently moving closer to the sidelines to get nearer to the action. The applause and cheering that came with every move was deafening, and at one point in time the Medicine bench had to tell their outfield players not to get affected by the Law supporters.

By half-time, the score was 7-5, which seemed fairly close on paper, but everyone knew that we had scored 6 to Medicine’s 1 ever since we recovered from the deficit. There was a palpable excitement amongst everybody, and both players and supporters grew in confidence. Every attack was made more ferocious by the cheering, and every defence more daunting for the opponents. Before long, we were sure that we would win, but this did not lower our volumes. Such was the intensity of the match (and perhaps my lack of professionalism) that I missed photographing a couple of moments in the game even late on.

At the end, with the final whistle, the score was 16-11 in our favour. We had won. The players trudged towards us, and despite their fatigue, lined up to bow to us in a moving gesture of appreciation of our support. We were no less thankful, having been treated to a match that without a doubt would be one of Law-Med 2013’s best.

Congratulations, men of Handball. You deserved every point, and you deserved the win.