After having been placed second (note the word second is intentional) for the past 9 years, Law finally emerged victorious this year against Medicine in the annual Law-Med debate.

Unlike previous years, the motion for the debate this year deliberately excluded law and medical elements so as to simulate a level playing field for both faculties. It was also decided that a neutral motion would better meet the objective of fostering camaraderie and goodwill amongst law and medical students. After several rounds of deliberation, motions thought to be overly serious (or resembling too much of the Raffles Institution’s mission) eg “Those who think should lead” were rejected, with both faculties agreeing to a more light-hearted motion: “There is no point in preparing for a zombie apocalypse.”

Both teams put up an incredible performance. Team Law was represented by an immaculate trio — Zansher Husref (who is rarely sighted in law school, because he does what he does best – “self-study”), Prof Goh Yi Han (who is arguably NUS Law’s most well-loved Professor, SGCA’s favourite amicus curiae) and Anand Tiwari (Lord Commander viz a viz commander also of law school girls’ hearts). 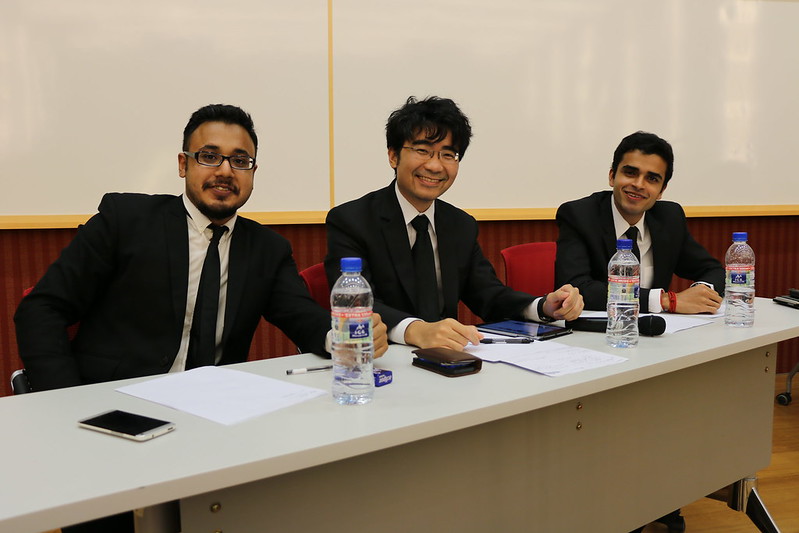 Team Law all decked out in sleek suits and charming smiles. The epitome of substance and form indeed.

As the proposition, Law relentlessly advanced their case with confidence and charm. Law’s main argument was that there is no point preparing for a zombie apocalypse because a zombie apocalypse does not exist. And even if it does exist, the apocalypse is not something we can prepare for since it is unprecedented. This is unlike the occurrence of natural disasters (eg hurricanes) where they first of all, exist, and where there are, second, practical means of preparing for the situation since there is some kind of semblance as to how they happen and their effects on mankind. It was Law’s position thus, that if doctors were to spend efforts preparing for a zombie apocalypse, they deserve to be sued for professional negligence. And even the pro-doctor Bolam test will not be able to save them. 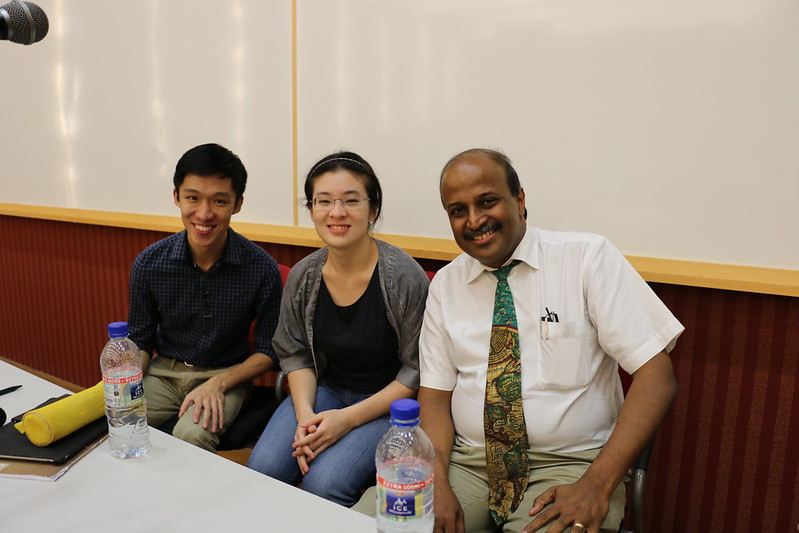 Medicine, on the other hand, did a fairly decent job in defending their motion. Medicine’s main argument was that prevention is better than cure, and that there is meaning in preparing for something even if it cannot be contemplated in the near future, citing examples of discoveries made in Science.

At first glance, there are already many problems with this argument. Prof Goh Yi Han took the opportunity to tell Medicine that discoveries made in Science were not something that the inventors prepared for. That the person who discovered fire, did not actually prepare for fire.

Medicine also relied on vague notions of human spirit to further their argument. This is the writer’s best understanding of the argument (that is, if can even be coherently rationalized) – that there is a point in preparing for a zombie apocalypse so that humans can work towards saving mankind, rather than engage in mutual destruction in a zombie apocalypse. It is this writer’s contention, that the argument does not hold water, and is embarrassing to type down, much less debate about.

Unsurprisingly, Medicine had their arguments severely undermined and was brutally lawyered left, right and center. In terms of style, Medicine speakers were also put in rather compromising situations. Their first speaker was unfortunately afflicted with a zombie march just minutes into his debate. 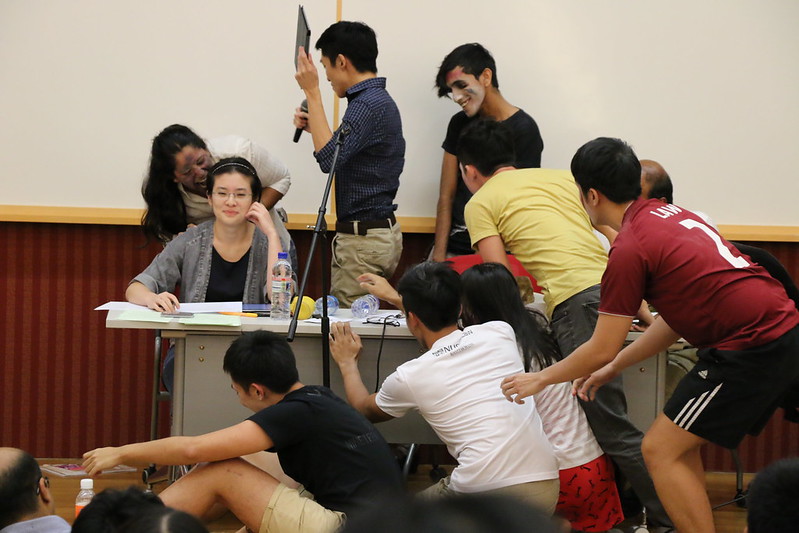 The Zombie Apocalypse descends on Team Med, maybe LawMed should include an Left For Dead 2 face-off to prepare our Medicine friends for an onslaught.

These were some professional zombies, complete with highly convincing twitching and manner of walking. There is indeed much talent in law school. #LawIVthrowback

Needless to say, Medicine was completely taken by surprise and had trouble continuing the debate. It was an impressive live demonstration by Law to show that there was no way in which to prepare for something they couldn’t have expected.

Law was on fire when it was Medicine’s turn to speak. There were many attempts to offer points of information to rattle the opposition speaker. Prof Goh had many shining moments,  especially when he asked Team Med’s speaker to catch her breath, or if she would like have a sip of water. After numerous interjections, Zansher nailed it in when he said, “HEY GOODLOOKING, point of information?” Afterwhich the opposition speaker did appear, for a brief moment, to have lost her train of thought. 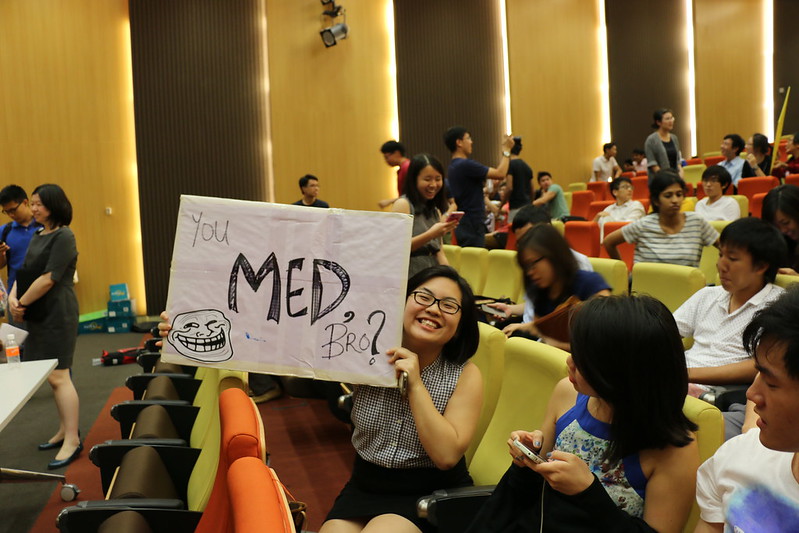 In essence, Law maintained the upper hand and established control throughout the entire debate. Our third speaker, Zansher, added another dimension to the debate. He challenged Medicine to come up with a contingency plan within the realm of lawlessness during an apocalypse. Here, he makes reference to Speluncean Explorers (yes, Legal Theory is back to haunt you) and likens the state of lawlessness in an apocalypse to that experienced by the Speluncean Explorers in the cave. He says, “In a global epidemic, everything in law is gone. We’re talking about the most civilized thing; Law, and that, is out of the door. Doctors yet want to give you a plan. Efforts in a situation where law and order doesn’t exist.” He then goes on to add, “Law is saying, come on Medicine, show us what you’ve got. If you say there is a point in preparing for a zombie apocalypse, show us your plan.” To which Medicine gave evasive responses, and relied extensively on a tongue-in-cheek guideline on CDC’s website which aims to prepare people for foreseeable events (of which zombie apocalypses are not). 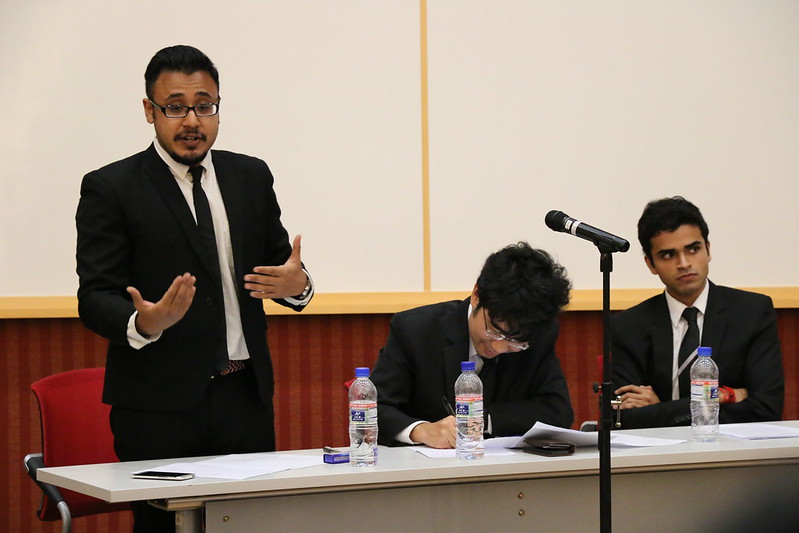 Zansher owning, whilst Lord Commander Tiwari gives Med the death stare. Prof Goh probably trying to smoke something up for his next point.

To be honest, the winner of the debate was clear at this point. There was nothing Medicine could have done, and there would be no point preparing for it anyway. Congrats, once again, Team Law!

On the other hand, The Best Speaker, went to Medicine’s Prof Paul Tambyah who quite frankly deserved it for his sharp wit and charm. 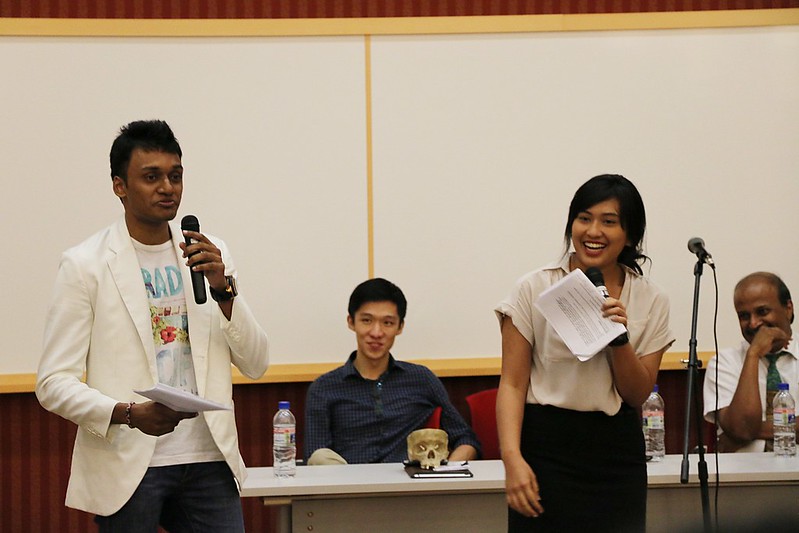 Last but not least, here are our very engaging emcees for the afternoon who were very, very entertaining and hilarious. Thank you for unabashedly admitting to using the same script for the past 9 years. But now with law’s first win in 9 years, the script finally has to be edited next year. About time, friends, about time. This shall be the year Law (& Order) is restored!