Just a reminder that we’re the Squash IFG Champions. #ThrowbackTwentythirteen

If squash were an Olympic sport, there is no doubt that the players from the Law team will make it into the Singapore squad. Both teams from the Law and medicine faculty put up a good fight in a gruelling battle between the kings and queens of the sport. The Law team which comprises of team captain Isaac Ho, Kim Wee, Jade, Chee Hian, Carissa and Zeslene were nevertheless undaunted throughout the game. If anything, the fearsome demeanour of the medicine team had seemed to boost their spirits. The format of the games consists of 4 matches of singles, followed by 1 match of doubles. 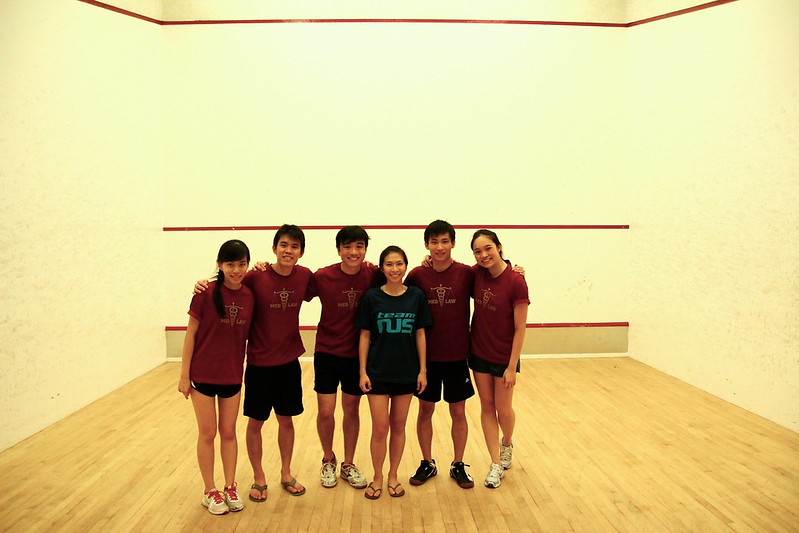 For the singles game, the first to step up was our charming squash captain, Isaac. During the warm-up stage of the game leading up to the actual match, Isaac’s tenacity was overpowering. With each shot fired towards the helpless front wall of the court, a resounding ‘phack’ was given off. The elegance of each stroke cannot be understated. Both players appear to be in their top form as the games finally began after a good 15 minutes of warming up. Initially, perhaps owing to his compassionate nature, Isaac allowed the medicine team to lead by 3-0. But if anyone ever had any doubts about the capability and skill of our captain, they were quickly shattered into smithereens (not unlike the hearts of the medicine supporters) as Isaac geared up his engine, and soon overtook the medicine team. Towards the end of the first set, the intensity of the game picked up as both players were head-to-head with a score of 6-6. However, Isaac soon proved to be the better of both players as he quickly took the lead and subsequently won the game with an overwhelming score of 11-7.

In the second set, Isaac once again proved his worth with yet another outstanding performance. Within minutes of the games’ inception, he was already leading at 10-6. Now, at this point (and I kid you not), everyone in the spectators’ gallery was sitting on the edge of their seats and wondering the same thing: can the medicine team pull back one point to force a deuce? But such question was soon answered as Issac went on to win the point and game. 1-0 to Law.

The second game played was the doubles match. Kim Wee, the only year 1 representative was paired with Jade for this match and their chemistry was simply molecular. The mutual understanding they share are like the electrons shared within a molecule. Despite losing the game to the formidable medicine team, they almost forced a deuce in both sets with a score of 15-12 and 15-11. 1-1 to Medicine.

By the third game, a large crowd of spectators have gathered around the tiny squash court and the cheering from both sides was almost deafening. Zeslene stood up to the challenge in this game and killed off her opponent easily with a thumping win for both sets of the game. 2-1 to Law.

For the fourth and second-last game, the incredible Chee Hian represented Team Law. This exciting and invigorating match was the decisive game as a win would secure Team Law with a victory in the squash tournament and subsequently one step closer to the bragging rights of Med-Law 2014 champions (plus a new foosball table, as my source has informed me). As the first set began, both players played like their life depended on it and each shot bounced off the once again innocent front wall with an earth-shaking ‘PHACK!’. Every member of the audience was cheering their lungs out for the players and every once in a while, a member of the public from the adjourning courts would walk over to steal a peek of the action. Despite of Chee Hian’s valiant efforts, the medicine team conquered the first set. However, this defeat only spurred Chee Hian on as he soon hit his top form and won the next set. Before the final set began, Chee Hian’s opponent conferred with members of his own team briefly. It appears as if they were discussing their next strategy! The great Chee Hian may be good, even perfect, but would this advice decapitate him in the next set? The audience soon found the answer to be in the negative as Chee Hian dominated the third set once again and won the squash tournament for us. Squeals of happiness emanated from the audience as the final point was won and spectators from the Law side may be seen congratulating each other. 3-1 to Law. Even though the squash tournament hadbeen won already, both teams nevertheless played the fifth game.  With the pressure of winning removed from the shoulders of our final player, Carissa, the atmosphere of the game was visibly less tense. Even though she eventually lost the game, both players shook hands cordially and congratulated each other after. Final score: 3-2. 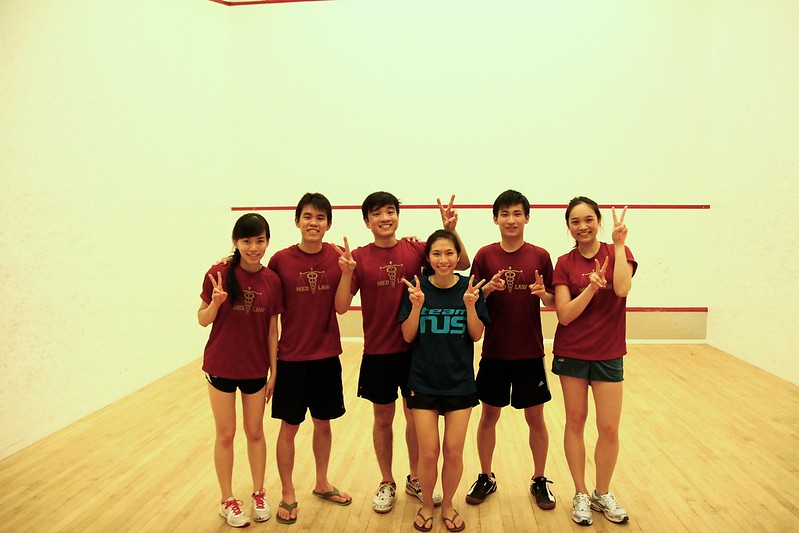 Team Law all smiles with the cuteZyx poses even before the game. Their confidence and pizzazz certainly carried them through the contest.

As a squasher himself, the author has watched and played many a squash match himself. However, he must admit that the game he has just witnessed today is indeed one of the most exciting he has ever seen in his life. Both teams had played excellently and credit must be given to the medicine team as well for putting up such a good fight. In light of the events witnessed today, the author must concede that he may never see as good a game in his life again.