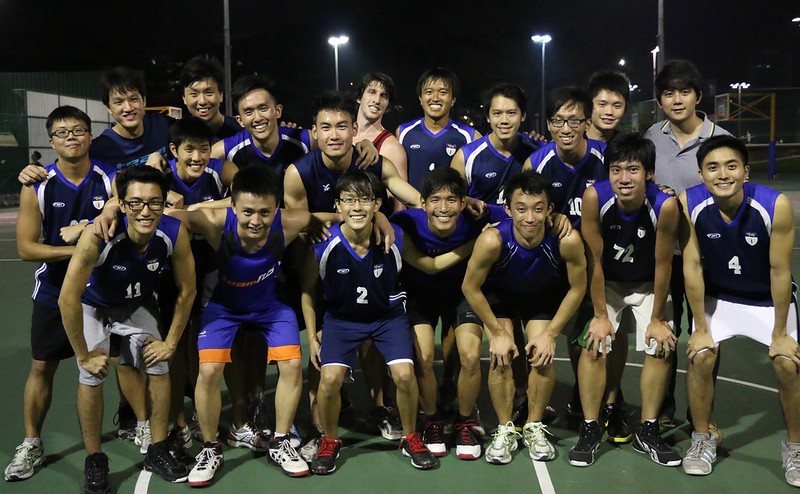 Law Med 2014 GOLD medalists and record-breaking, undefeated (for 2 years in a row!) defending champions once again.

Fans of basketball were treated to some of the most exciting events in recent memory over the past few days, beginning with the NBA Rising Stars Challenge on Saturday (15th February) and culminating in Law’s clash with Medicine on Monday (17th February). To mark the gravity of the match and the momentous battle between the two traditional powerhouses, the table official signaled the start of the match with a smooth touch of his iPhone screen. The game was well underway, even though the scoreboard in use was a free iPhone app that malfunctioned mostly.

The Law team, led by Captain and all-around handsome man Dillon Tan, went into the game eager to build on last year’s victory against Medicine in the same competition.Yet, Law had cause to be wary: Medicine had assembled what was described by veteran point guard Tien Wei before the game as “their best squad in years”.

Those words made sense in double-quick fashion as the Medicine team raced to an early lead behind a flurry of three-pointers from sharpshooter Lee Bing Howe. Readers of last year’s article (seriously, check it out) will recall the terror that he struck into our hearts with his Stephen Curry-esque shooting. The Medicine players proved to be worthy competition, playing stout defense and executing their offensive sets (at least according to their sideline supporters). Law responded by introducing shooters like Jerrold, Elias, Peide and Eric at various points to spread the floor and stretch the Medicine defence, but credit must be given to Medicine for doing a fine job of standing firm in the face of buckets by, among others, Darrell and David and holding their lead into the second quarter and then the half-time break. 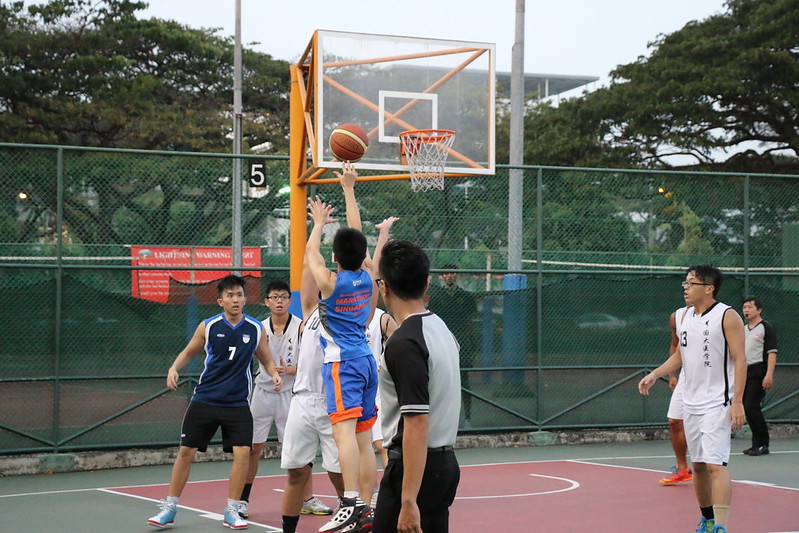 Tien Wei (#?) treats Law Med games as a stroll in the park recreation burn some cals. He’s seen here suited up in an NUS run singlet to create confusion so that Medicine will not have figured out his jersey number by the end of the game.

Entering the third quarter, Law team coach Danny made the move of sending this writer onto the court for the purposes of journalistic authenticity. What better way to accurately write about a game than to experience a few minutes playing in it, right?

Anyway, as the game progressed, things turned increasingly physical, resulting in some of the Law players sustaining hard knocks and prompting exchange player/former NCAA football star David Brekke to remark, “They’re the medical team, they should do something about this!”. The humour in the statement, however, stood in stark contrast to the grim reality that towards the end of the third quarter, the Law team was still trailing Medicine. 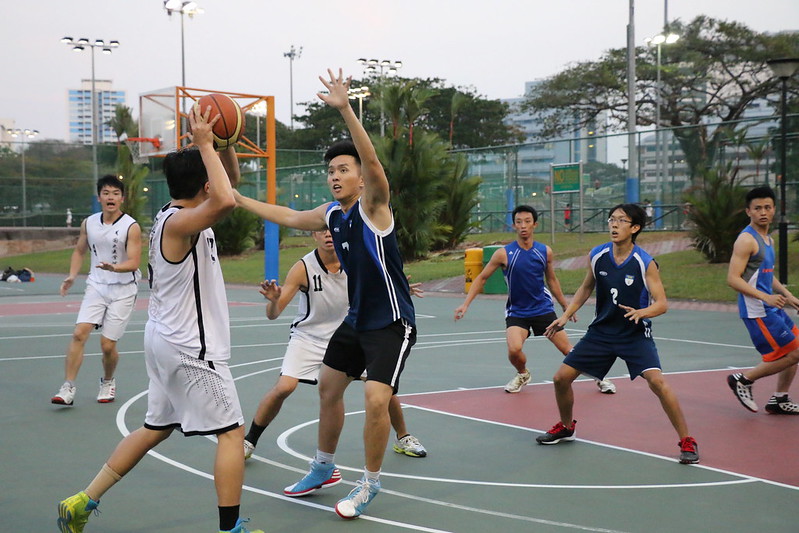 Year 1 Rookie, Wayne Chan (#7) takes his defense seriously although he nearly breaks his own ankles here. In the background, (#2) Jerrod Au mirrors his every move. Jerrod is also known as the Year 1 doppelganger of famous Year 2 DOTA warlord, Adwyn Chuang. 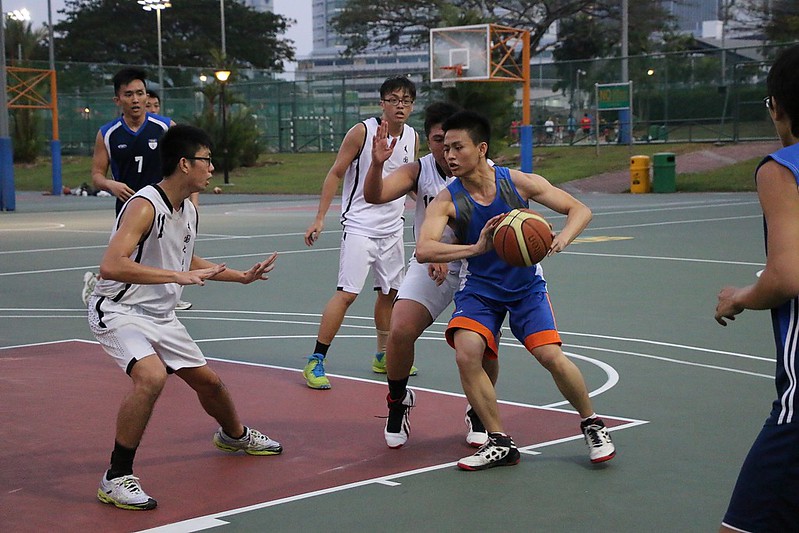 Tien Wei (#?) flexes for the camera while making the no-look (an EXTREMELY difficult thing to do – try tossing a paper ball into the wastebasket with your eyes closed) pass to Jerrod  (#2).

Then, as time expired, the Medicine team captain Hoo Chee How heaved a shot from well beyond half-court towards the Law basket. Swish. That man in all likelihood will have a successful and fulfilling medical career, but he will certainly be hard-pressed to conjure up another miracle quite like this one. Anyhow, as the ball dropped through the net, the Law players’ jaws dropped. Even Lady Luck was not on our side tonight. With only one quarter — ten minutes — left, Law was now down by five. Could we pull off the comeback victory? 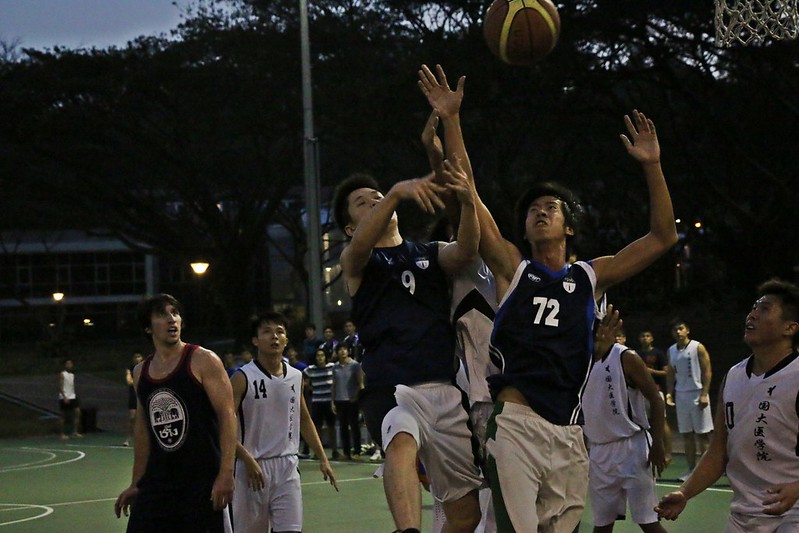 Captain Dillon Cha-Million-Air-Time Tan (#72) contests for the rebound. Dillon is relentless in battle, as seen in his unconscious berserk here to snatch the rebound from fellow batchmate Eric Huang (#9). #ShadesOfBellCurveWarfare 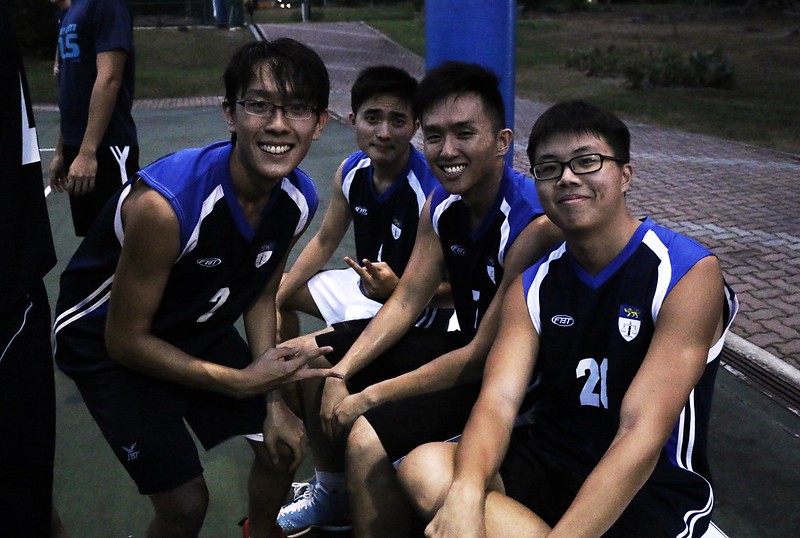 Emerging Superstars: Jerrod (#2), Elias Tiong, Wayne and Jing En (#21) pose for a mid-game shot as they found the match too easy from the get-go.

Captain Dillon, sensing the need, stepped up and shared some of the guiding principles that have seen him through basketball and life. Penetration! Get tight! Hard D! 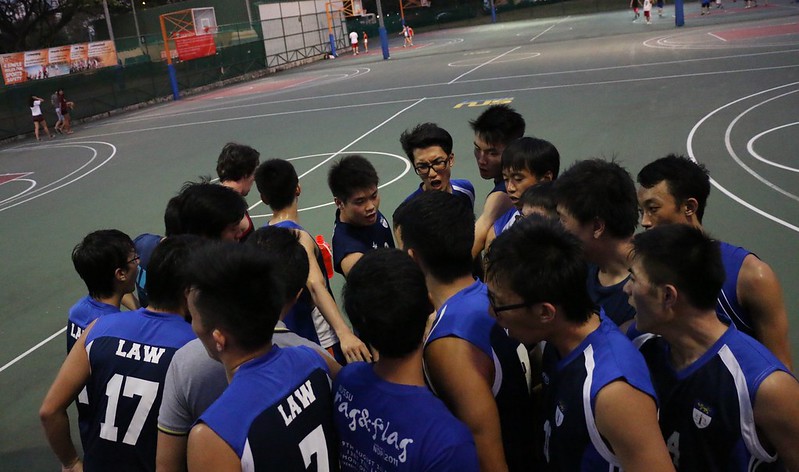 War Cry: Just before the start of each quarter, basketball teams usually gather in a circle to out-shout the each other. The team with the louder shout obtains 2 bonus points. 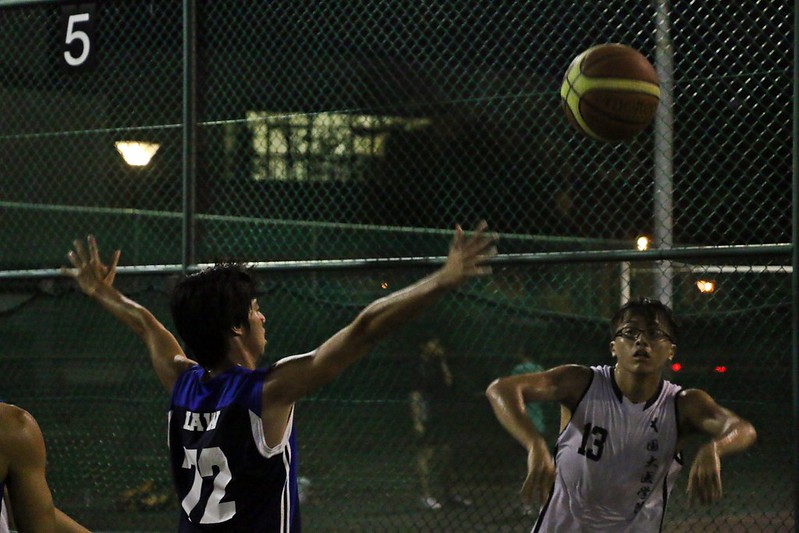 Fortress: Dillon’s excellent defense confuses Chee Howe (#13) to pass the ball to camera-woman Sam Yiting. Thankfully, she managed to cheekily sneak a photo in before making the 3-point shot. 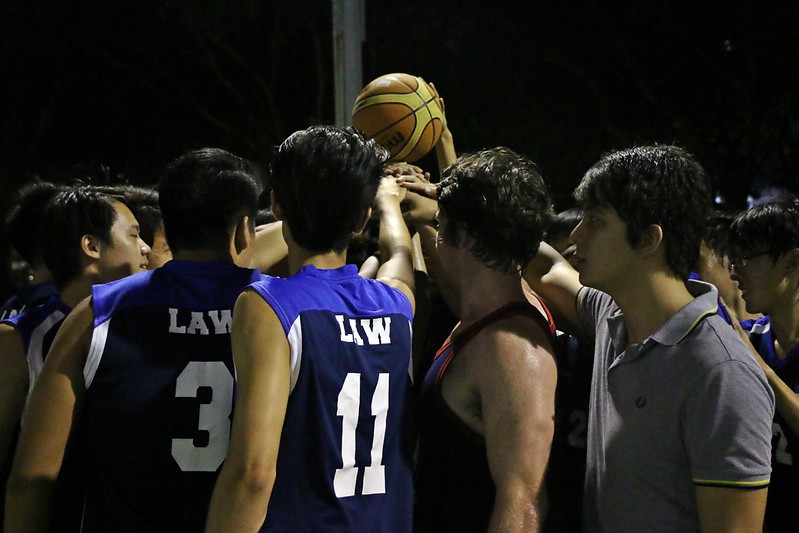 A second bonus mini-game in basketball sees both teams trying to balance a basketball in the middle of their huddle for as long as possible – winner gets 5 bonus points.

The Law players, inspired by his brilliant oratory, responded positively by truly performing in the fourth quarter. A period of relentless driving and precise shooting by the thoroughly manly Tien Wei (promptly hitting 3 mid-range jumpers in a row) was soon followed by the climax, where See Tow shot, scored, and shouted “YES!”, his fist firmly clenched. That shot put Law on top for good, and from then on Law sensibly slowed down the tempo to ease out the final throes of the game. 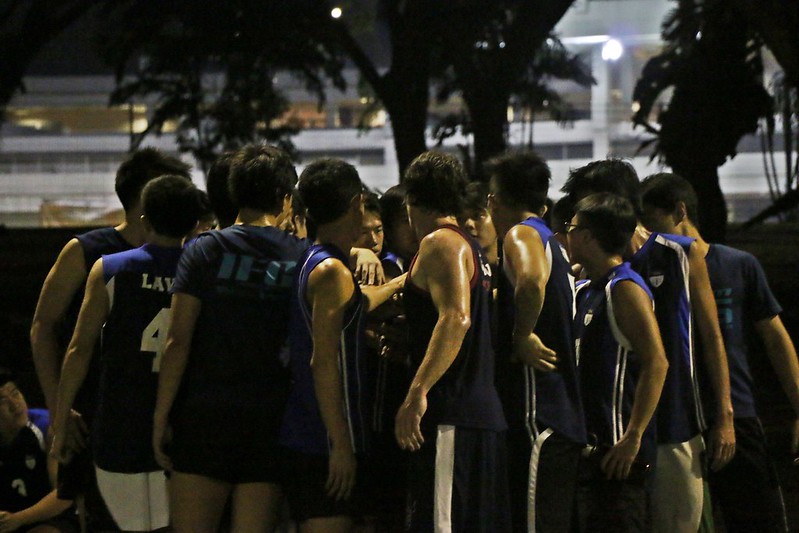 Veteran photographer Sam Yiting loses focus on the shot as she is momentarily distracted by the shimmering glory of Year 2 baller, Basil Lee’s smexy face. 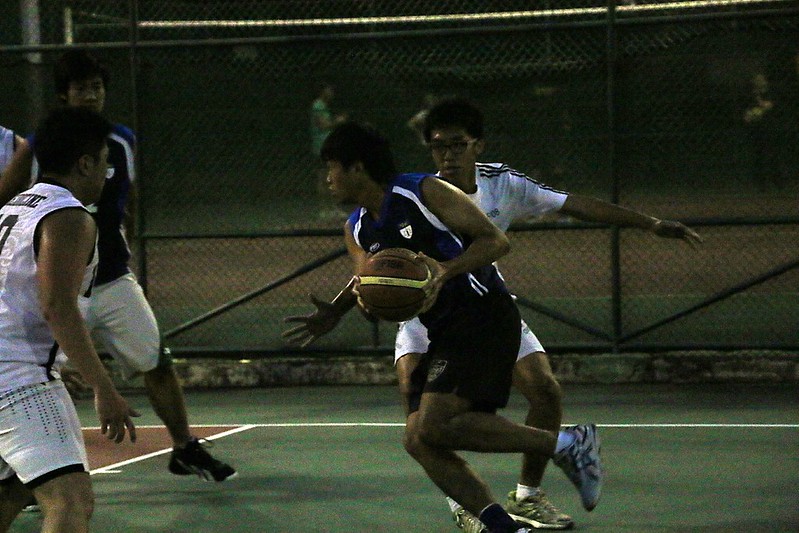 The “NUS Sports Recreation Center” Play of the Day goes to Seetow (who dates a Medicine girl) who manages to hit an And1 on this play (a foul-in basket), sending the Law bench into ecstatic euphoria. Seetow has managed to honed his nightcrawling skills with a dark skin tan to elude the vision of defenders at night.

The match eventually finished 37-30 in favour of Law, behind the composure and savvy of Tien Wei, the furious rebounding of David, Wayne, Cheng Aik and Dillon, the wily coaching by Danny, and, last but certainly not least, the gritty, energetic play of every single team member. The Law basketballers are delighted at getting the Law-Med (or Med-Law, if you’re anal like that) Games off to a fantastic start for the good guys, and thankful for the support from everyone who made the trip down to Kent Ridge to watch the game. Here’s wishing our fellow competitors the best of luck in their respective events! 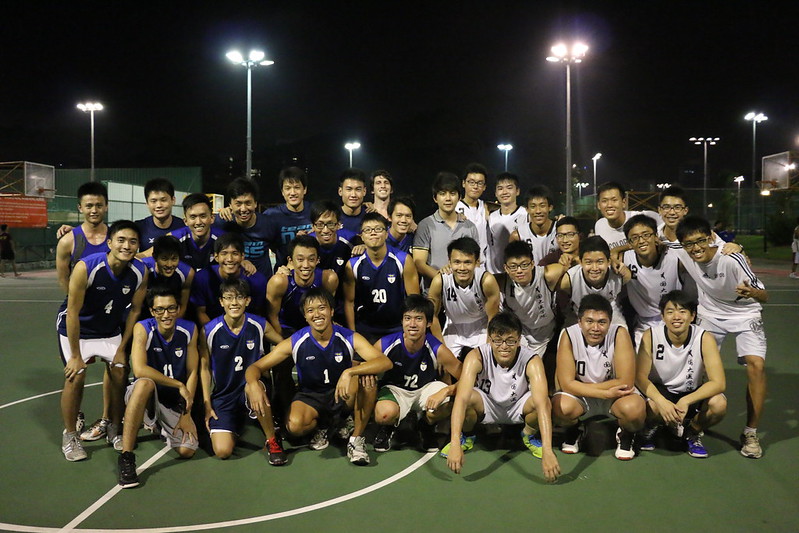 Ceremonial Combined Photo: looking at last year’s photos, it seems reasonable to conclude that the lawyers and doctors only exercise once a year in the month of February for approximately 60 minutes.