“Through passion, I gain strength.

Through strength, I gain power.

Through power, I gain victory” 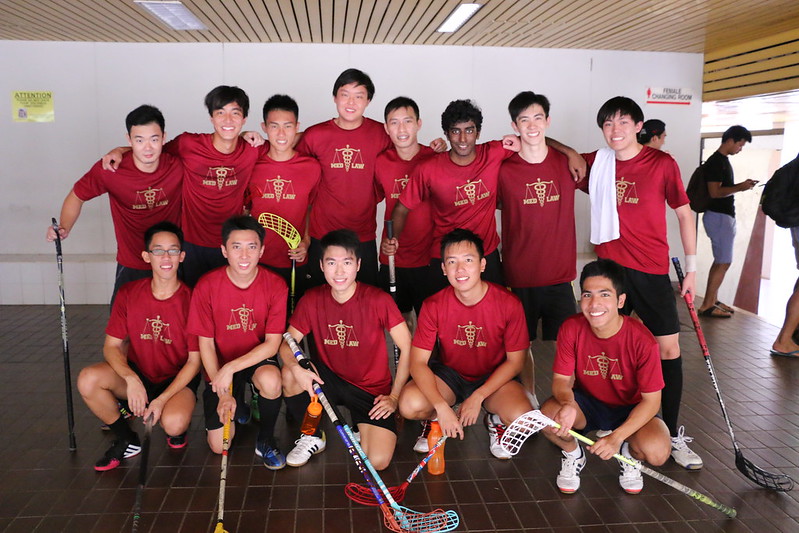 The floorball teams from Medicine and Law met at the start of recess week to contest the annual Law-Med Games. The blazing sun made it unbearably hot, but the weather nevertheless paled in comparison to the fiery atmosphere in MPSH. The two teams were no strangers to each other, having met earlier in the academic year during the Inter Faculty Games. Then, the game ended in a draw for the men’s team, although the women’s team did not face Medicine. 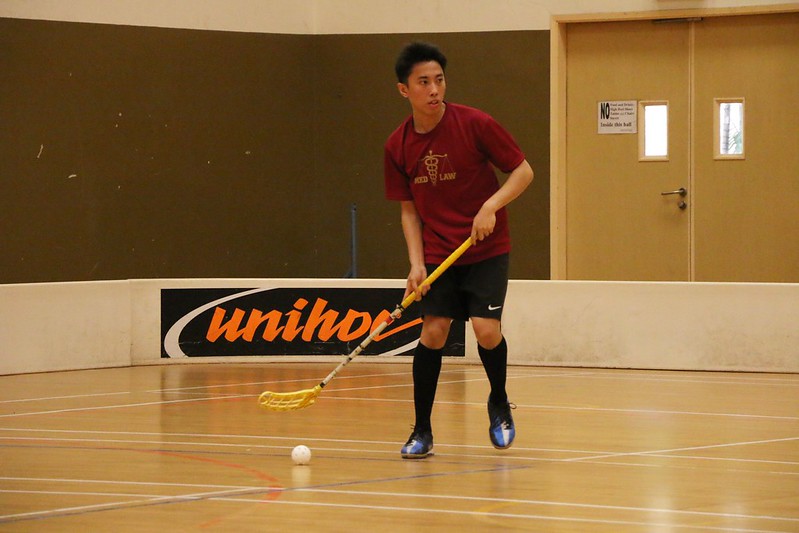 The men’s teams were more evenly matched than the girls’. The Law team was ably led by captain Hijazi (Y2), who strikes fear not only into the hearts of defenders, but also guys in law school, who fear not being able to find a girlfriend with him around. Based on previous performances, the fixture was expected to be a closely fought one, given the sheer amount of talent on both sides. It lived up to expectations, proving to be a nerve-wracking thriller with neither side letting up. 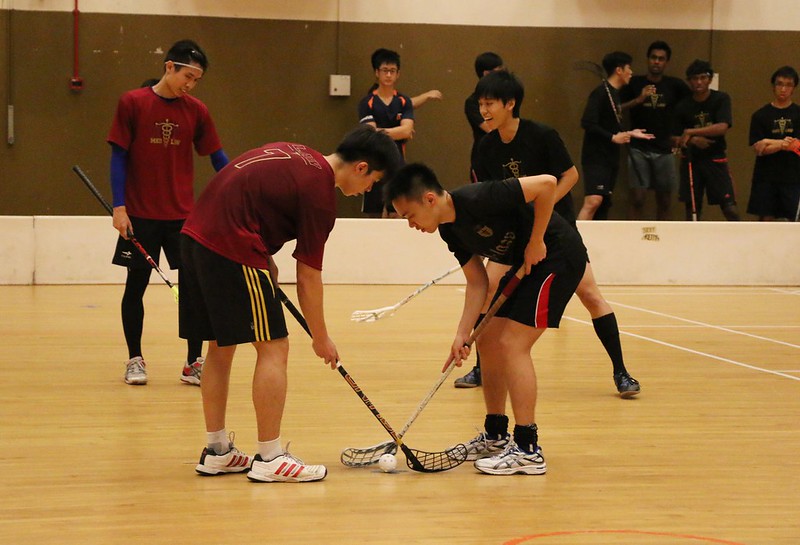 Opposing players face-off to get the game started. This is also when its best to get a cool picture taken. 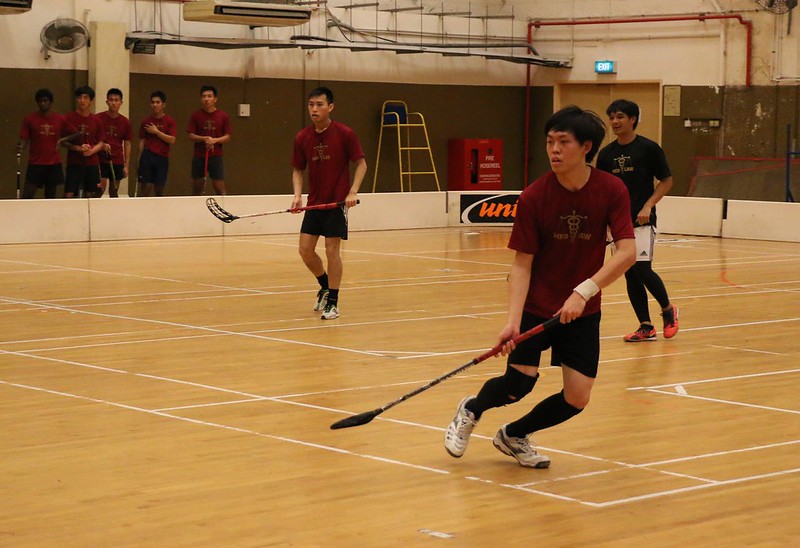 Gan Guo Wei (Year 2) was merciless to say the least. His fans were in full attendance too.

Medicine drew first blood, getting an early goal. Team Law was undaunted, and continued attacking furiously. Their efforts were rewarded when Gan Guo Wei (Y2) flicked an absolute stunner into the corner of the goal, demonstrating his IVP pedigree. Shortly after, Hijazi and Haziq (Y4) showed impeccable teamwork, only to be denied by the post not once, but twice. 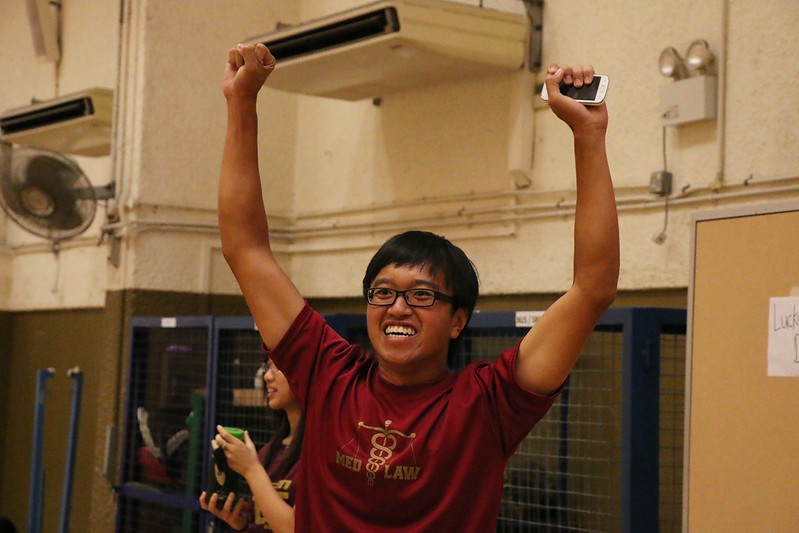 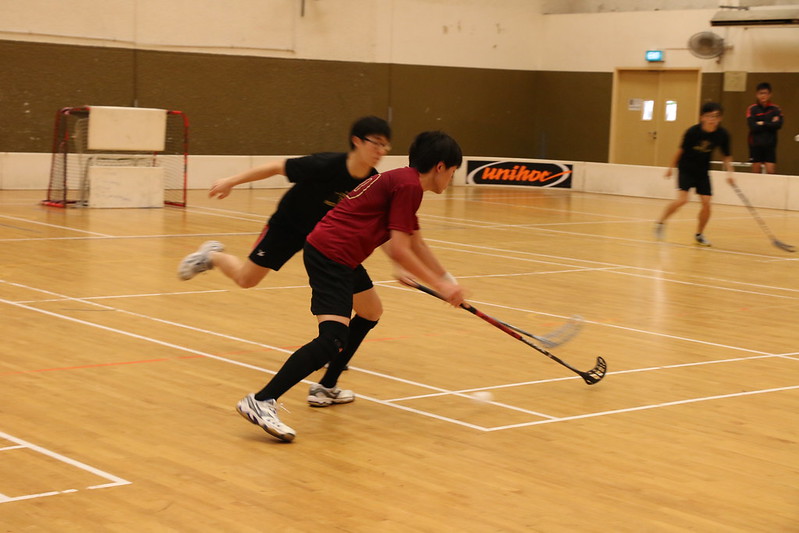 Even in the heat of the intense competition, Guo Wei manages to compose himself and trick the Medicine defender so that he has sufficient time to get into the photo frame. Fantastique.

The two teams ended up trading points, with Law taking the lead twice more through efforts by Guo Wei and See Toh (Y4). Medicine managed to equalize each time, and there was little to differentiate the two teams. It was simultaneously exhilarating and nerve-wracking, and the supporters would surely agree with this writer that it was a roller-coaster ride (of the Battlestar Galactica variety) of emotions. 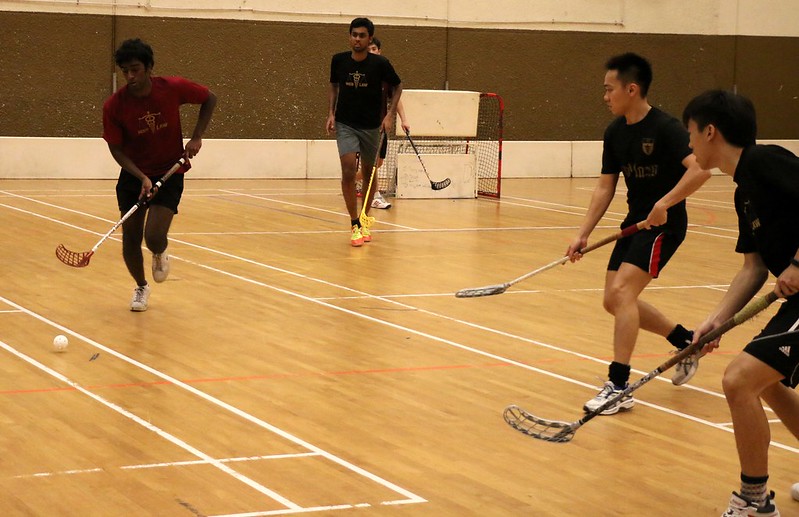 Ashvin is first to the ball as the Med defenders prepare to take him on. Ashvin also sings some mean tunes. 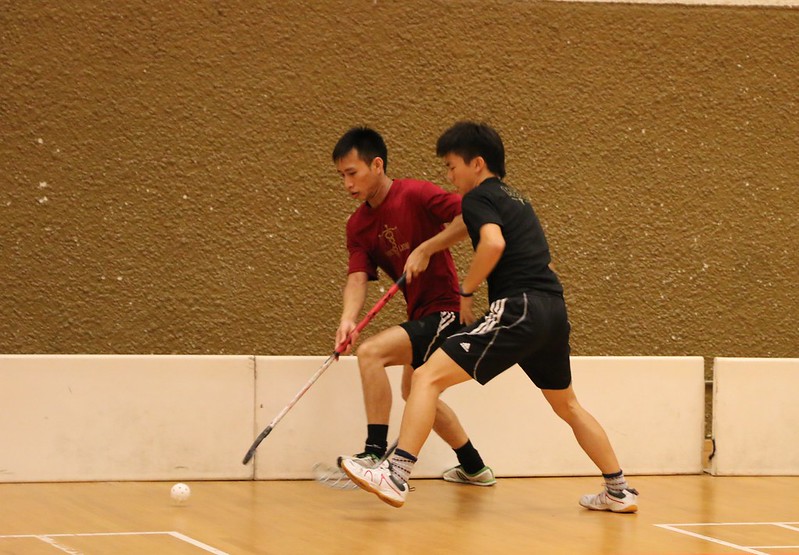 Cher Han squeezes down the line past his defender to avoid the bodycheck. Those are some serious calf muscles.

Ex-captain Ashvin (Y4), in his final year, produced a series of gravity-defying stops to deny the Medicine players. He was ably accompanied by Cher Han (Y3), who produced an effervescent performance. 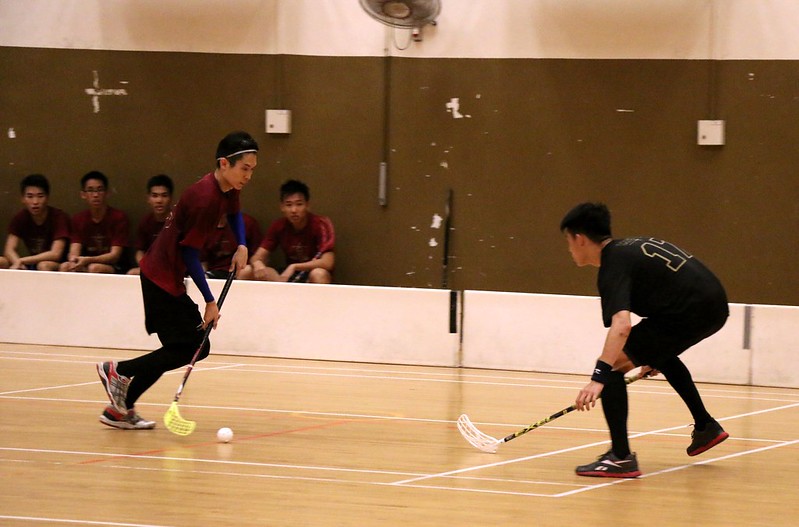 See Toh gets ready to put the moves on his Med defender. Poetry in motion. 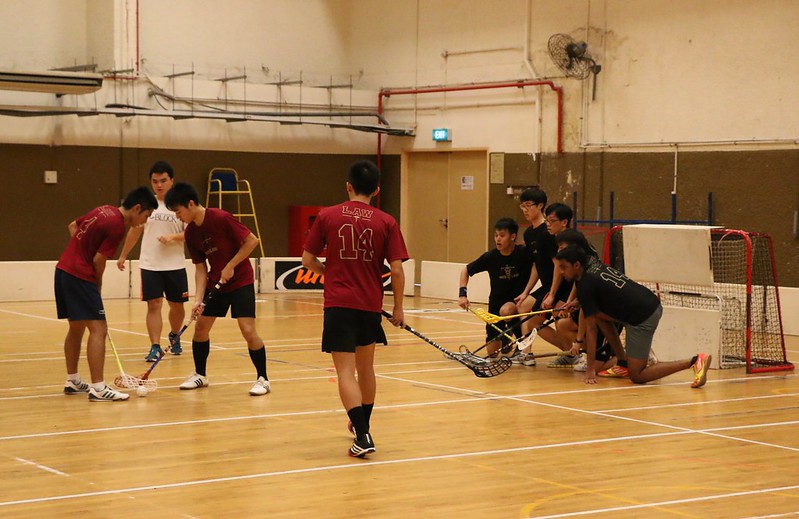 Haziq and Jimmy draw up a free-hit play to confuse the Med defenders. Although this picture captioner wasn’t there, I think it is very deceptive that #14 stands close but not near enough for the defenders to think he will receive and shoot eventually. Well-played. 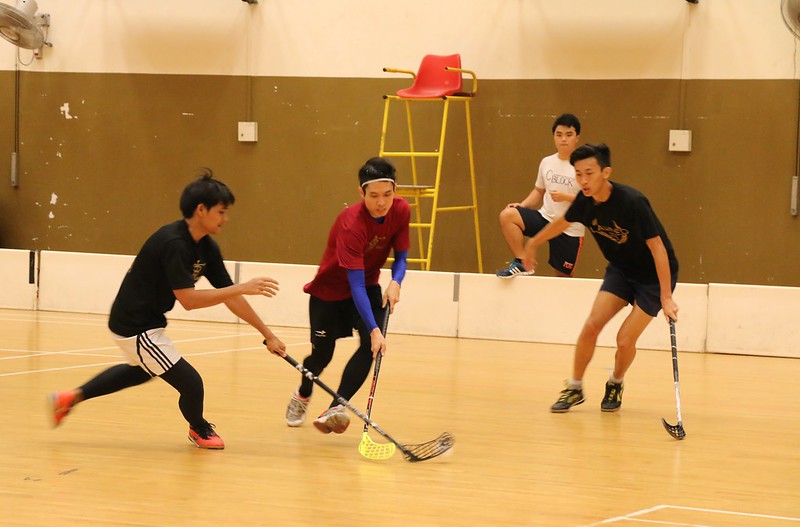 See Toh weaves through the defense as his neon green floorball stick turns on the techno.

As passions ran high, both teams upped the intensity of their game, eventually reaching a point where both See Toh and one of the Medicine players were given a penalty by the referee, and had to sit out for two minutes. This is a common practice in floorball, reminiscent of kindergarten when your teacher punished you. You know what they say about boys being boys… 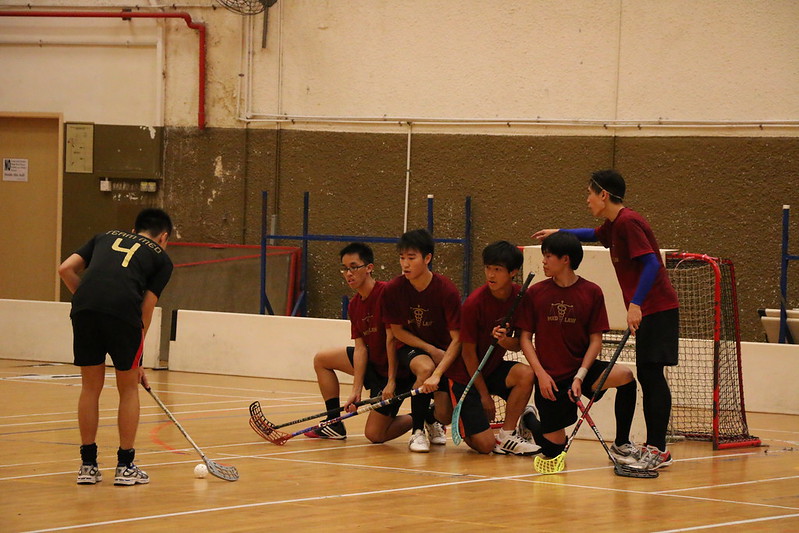 Our boys from Law form a wall to defend against the free-hit. Second in the wall from the left is Year 2 Ladykiller Jimmy Chuk who has had a line of shoes (Jimmy Chus) and a sport (Tchukball) named after him. 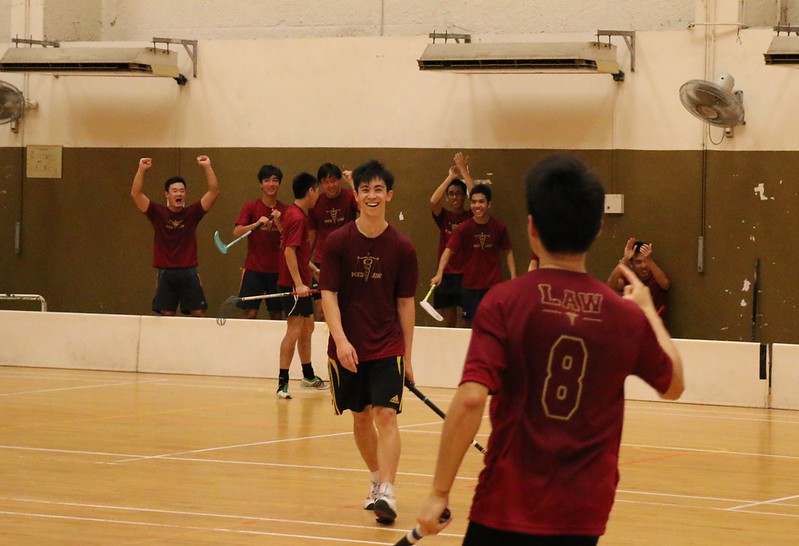 John Cheah (Year 2) looking really pleased. I think someone scored for Law – it must be! 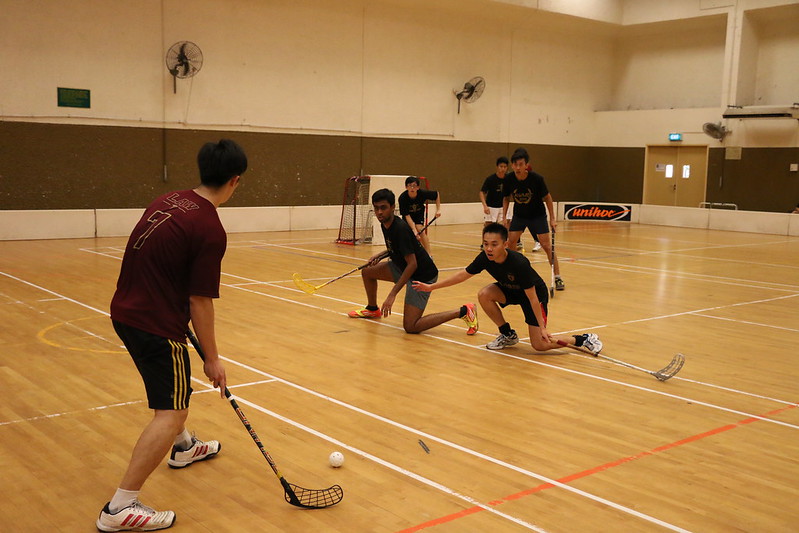 Even with defender Desmond (Y2) getting a two-minute penalty for kicking the ball, we remained steadfast and the game looked to end in our favour. However, a controversial decision went against us, with the referee awarding possession to Medicine in a vulnerable position. They duly converted with clinical (geddit) precision, and the game went into extra time with the score tied at 4-4. 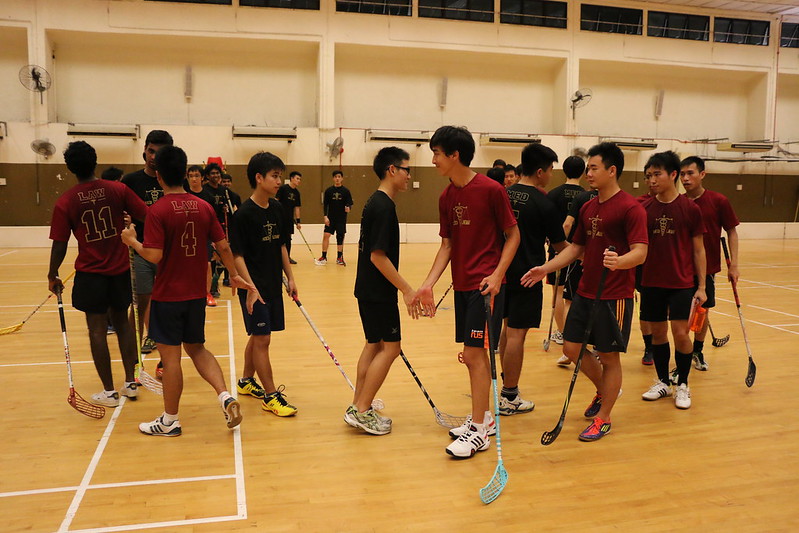 Despite our best efforts, Medicine eventually scored in the second half of extra time, thereby sealing our fate. While the vagaries of life dictate that we classify winners and losers, we fought hard to the very end and have every reason to be proud of our performance. 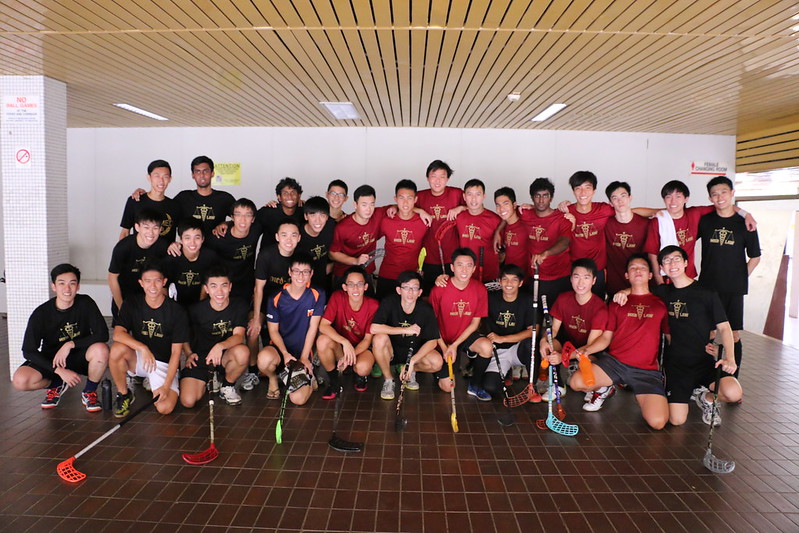