Since many may not know much about the sport of Floorball, here’s how it’s been gaining ground in Singapore:

Floorball was introduced to the shores of Singapore in 1994. Mr. Stefan Dahlgren was the man responsible for bringing the sport to Singapore. He introduced Floorball to the mass community by approaching People Association (PA) and Singapore Sport Council (SSC) to include Floorball activities in their programme. In 1994 SSC Family Day, Floorball was played in mixed teams and was known as “Streetbandy”. In 1996, Singapore sent its first National team to compete in the 1st World Floorball Championship (WFC) held in Sweden. It was also the first time an Asian nation competed in the WFC. The popularity of Floorball has since grown and is widely played both competitively and as a recreational sport.

The floorball teams from Medicine and Law met at the start of recess week to contest the annual Law-Med Games. The blazing sun made it unbearably hot, but the weather nevertheless paled in comparison to the fiery atmosphere in MPSH. The two teams were no strangers to each other, having met earlier in the academic year during the Inter Faculty Games. Then, the game ended in a draw for the men’s team, and a win for the women’s team. 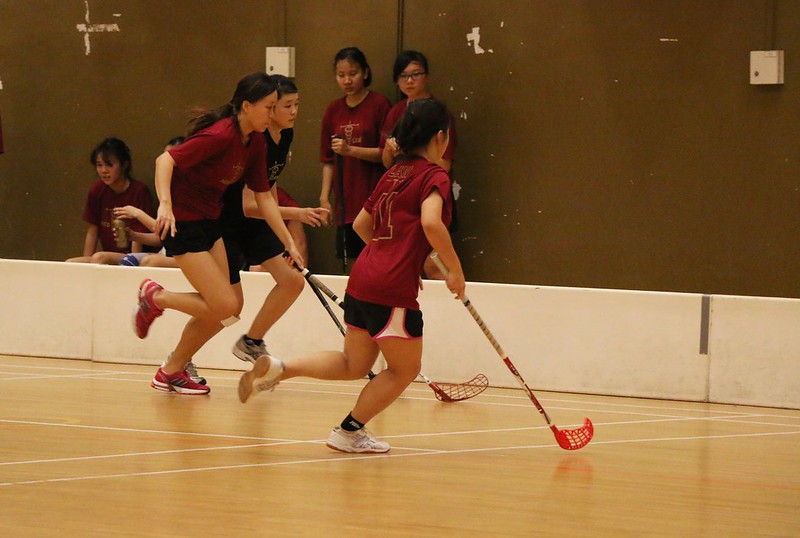 Captain Xue Kun gets rolling immediately. She is a multi-talented person and also represented Law for Netball for IFG.

Xu Xue Kun (Y2) ably led the women’s team into this fixture, bringing a wealth of experience into the mix. The day started off brightly, with Team Law managing to keep most of the possession. In the second minute, Shannon “The Cannon” Yeo (Y1) bulldozed her way through the heart of Medicine’s defense to take the lead. Law 1-0 Medicine. Shannon  represents Singapore Floorball League Ladies Division 1 3-year defending champions Albatross FC. 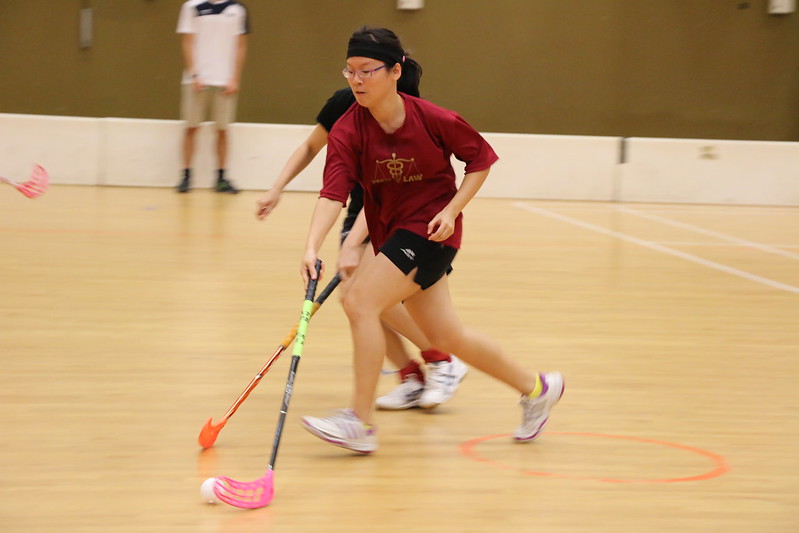 Shannon the Cannon (Year 1) exquisitely weaving her way through the Medicine defense. 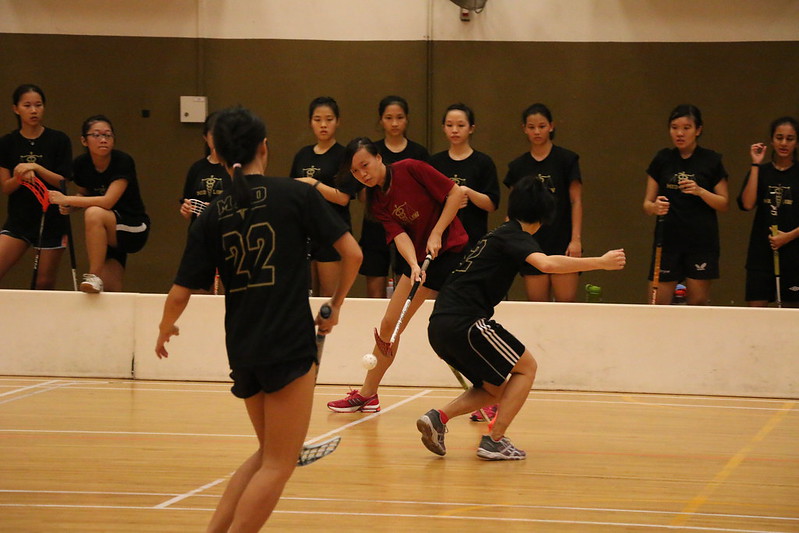 Xue Kun shoots around the Medicine defender – such finesse and courage!

This was quickly followed by a Medicine onslaught as they valiantly tried to equalize, but our defence was more than equal to the challenge, and held off their various attempts. Ex-captain Cassandra (Y4) marshalled the defence admirably, effectively creating an impenetrable fortress in our half. 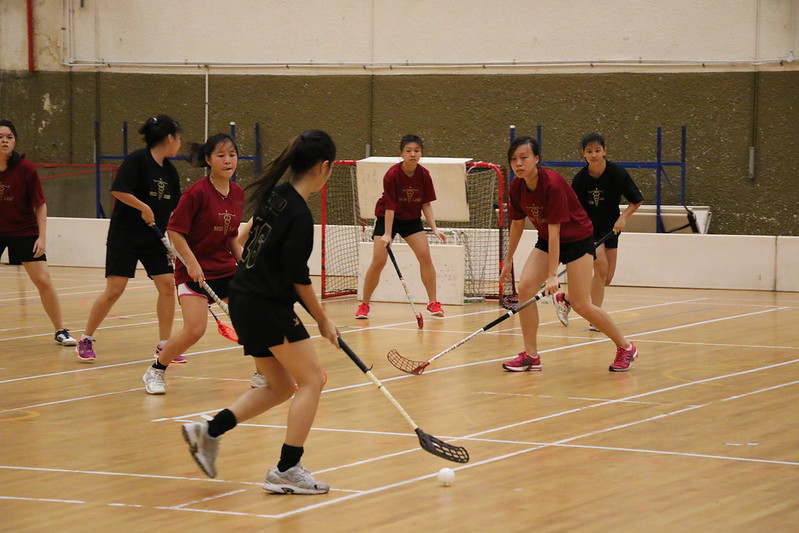 Elin (Year 4),Bei Han (Year 4) and Xue Kun (Year 2) orchestrate the Law defense against a Medicine attempt at goal. If you notice some stuff hanging at the goal… I don’t know what they are either but they appear to make the are of exposed goal smaller of course. 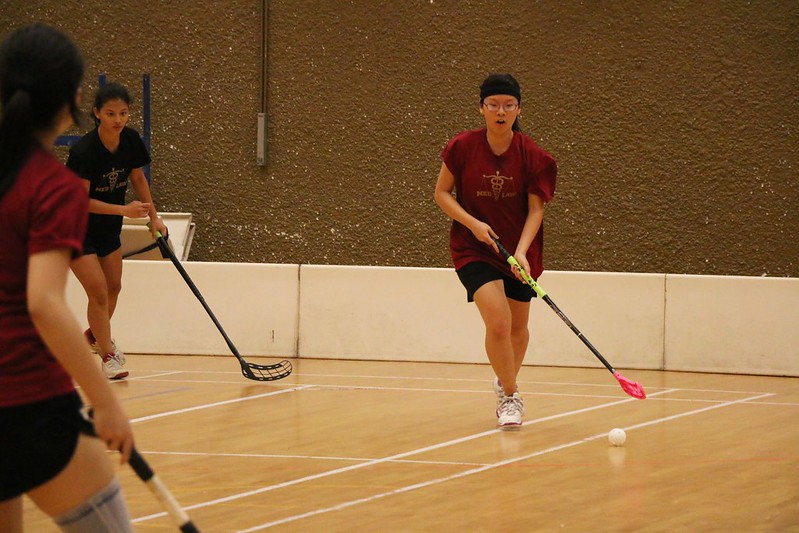 Shannon the Cannon was for all intents and purposes, firing on all cylinders. 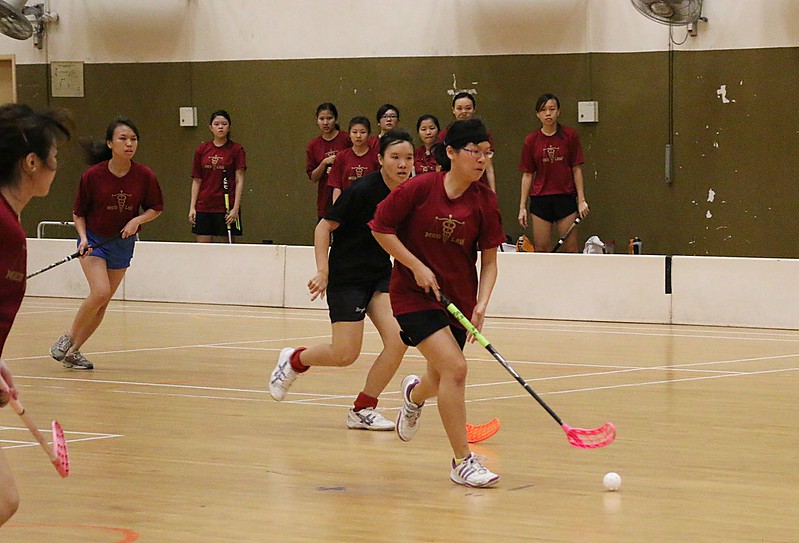 Shannon tees up a shot – out of the way everyone! 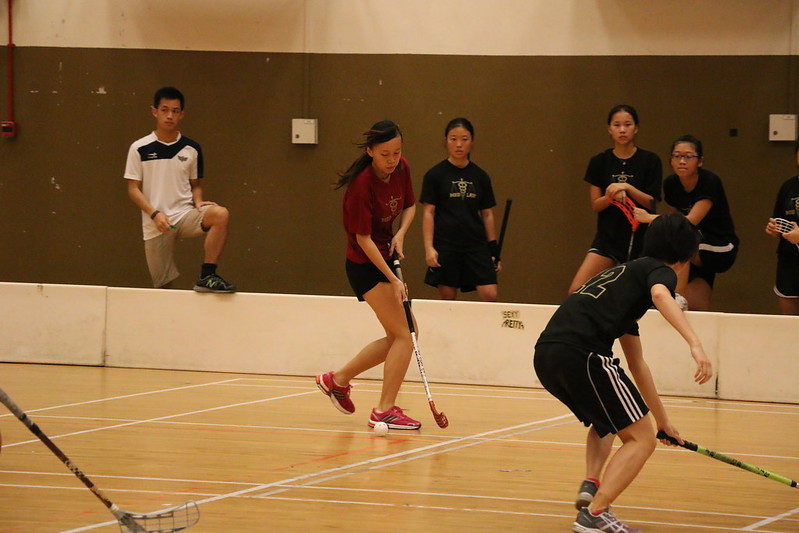 Xue Kun steadies herself as she lines up for a shot. Her dexterous moves and adroit ability are clear for all to see – there are no Med defenders within a 3.5m radius.

Cue the proverbial floodgates. In the second half, Elin Wong (Y4) smashed in a rebound and extended our lead, following some build up play that FC Barcelona would have been proud of. This goal was quickly succeeded by Shannon again demonstrating Messi-esque skills to weave through the Medicine defence. She eventually scored our third goal, leading to euphoric celebrations from the sidelines. One men’s player was so impressed that he was overheard enquiring whether Shannon could also play in the men’s game. Cassandra Goh, an ex-Albatross maestro, was also in stupendous form (refer to picture below). 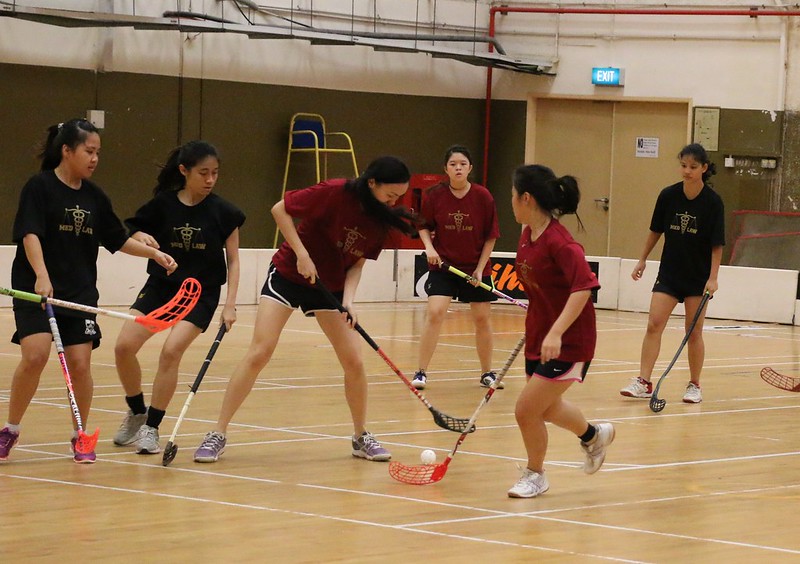 Keep Calm and Cass is in Control. 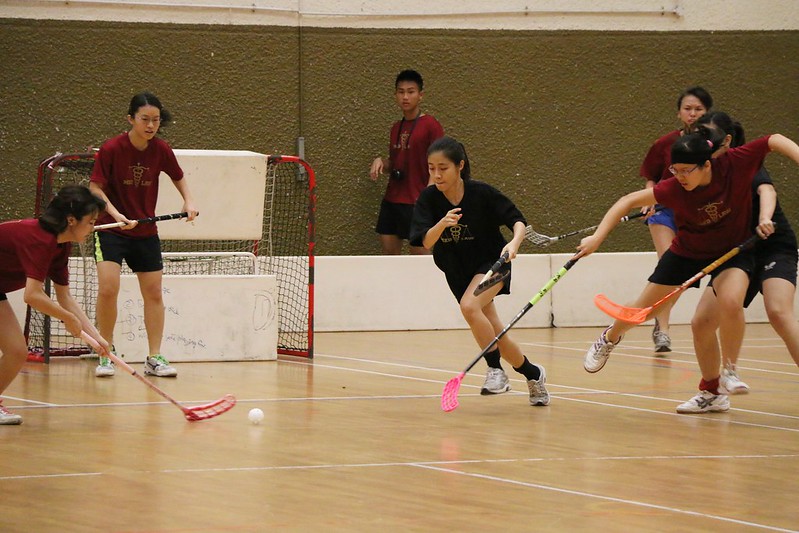 Clara Ng (Year 1) seeks to regain possession to launch the counter attack for Law. Meanwhile, Shannon’s high Floorball IQ and agility have already taken her past her Medicine defender. 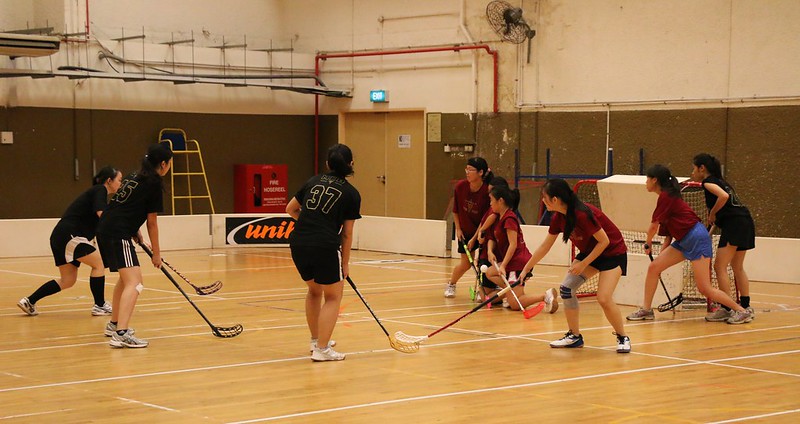 Our girls high-kneel, squat, stand, and do whatever they can to stop the Med girls from scoring off a free-hit. 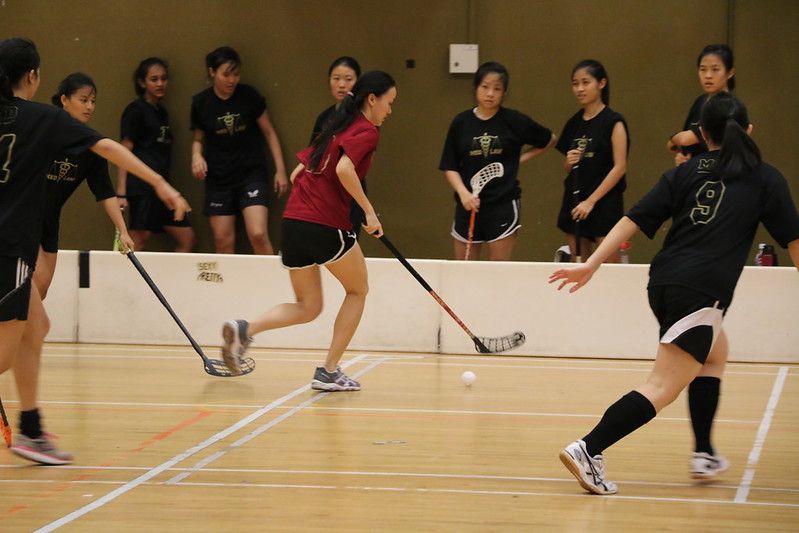 Against the run of play, Medicine managed to peg a goal back through a high lob that sailed into goal. However, by the end of the third quarter it was all but over, with Bei Han (Y4) and Jean (Y1) adding the icing on the cake when they scored our fourth and fifth goals respectively. It was a comprehensive result, and a triumphant finish for seniors Cassandra Goh, Soo Bei Han, and Elin Wong. (all Y4) 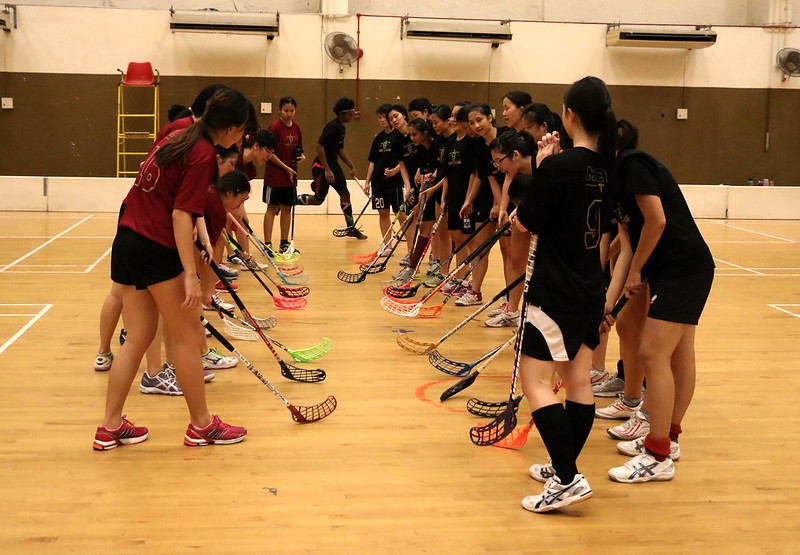 After the game, the girls line up to decide the nicest sticks among the lot. Looks like a tough one to call here. 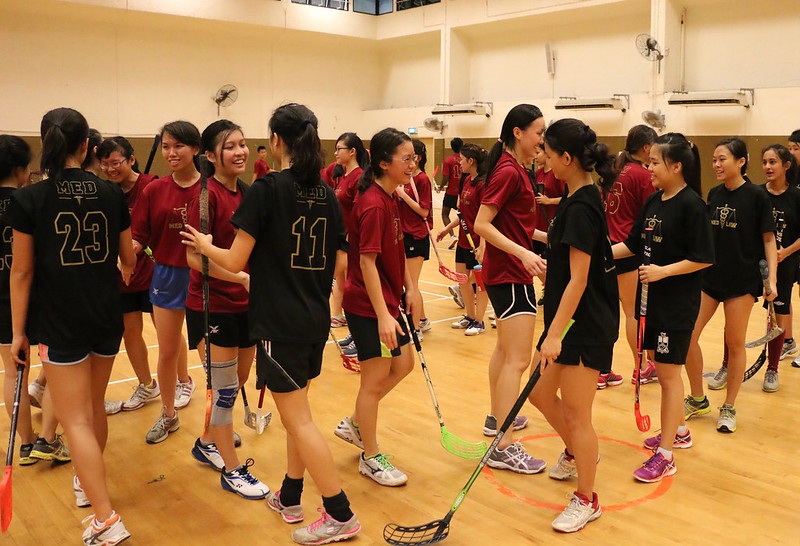