Law avenged their loss at the hand of Medicine in the Inter-Faculty Games earlier this semester with an emphatic 3-0 win at NUS SRC last Saturday. Buoyed by the ladies’ football team’s dramatic victory just minutes before, the men’s team took to the field in anticipation of completing a remarkable football double over NUS Medicine. And we did not disappoint. 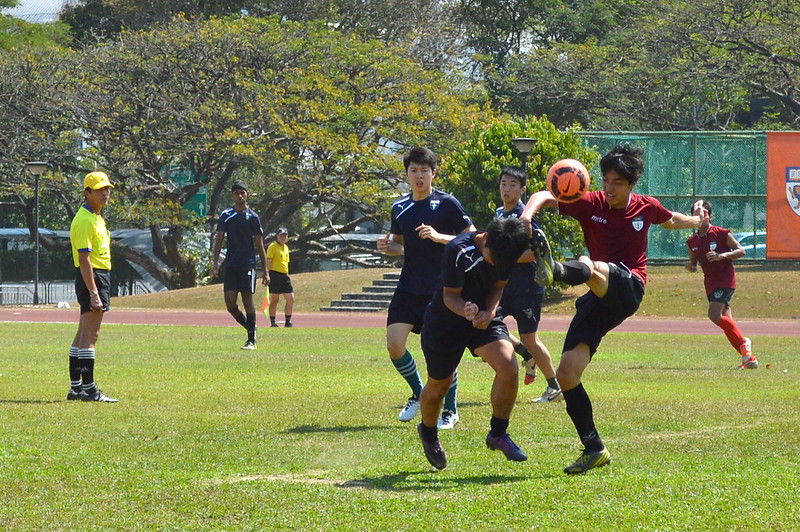 Julian (Year 3) misinterprets  Captain Toni Koos’ instructions to press Medicine and nearly gets himself sent off with this high boot; cue WWE Big Boot kick-to-the-face by Kane circa 1990s.

The game plan was to press Medicine at maximum intensity for the first five minutes, so that they would be unsettled. Team captain Koo ‘Kaptain’ Zheng Xuan, in laying down this tactic, clearly drew inspiration from Liverpool’s recent thrashing of Arsenal, where 20 minutes of relentless pressure yielded 4 goals and many happy people around the world (with the exception of Liverpool fans who were forced to miss the game and Arsenal fans). Unfortunately, the game was stop-start for most of the first half, and this gave Medicine ample time to regain their composure. Besides, the sweltering heat did no favours in sustaining our pressing game. One really wonders how star defender Zenzel Chew managed to survive wearing long-sleeved skins beneath his jersey. Nevertheless, we created some decent openings in the first half, with Julian and Damian seeing much of the ball and being forced to work overtime. 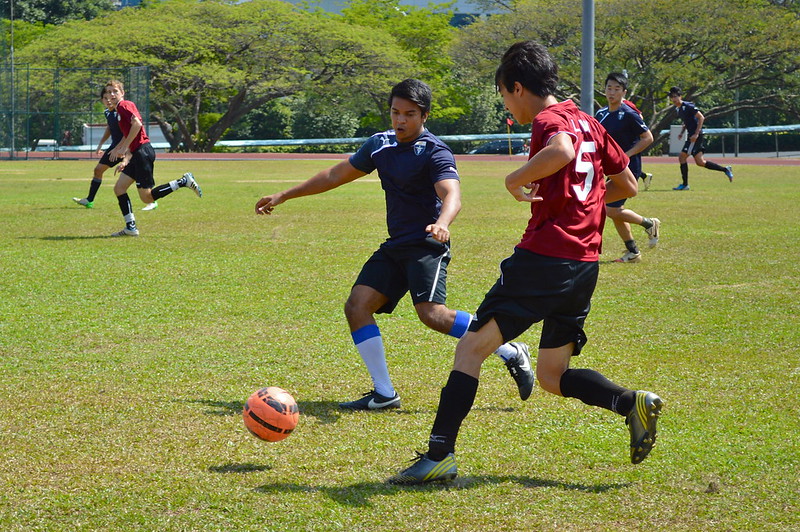 Giggs will tear you apart: Julian down the left flank as the Medicine defender struggles to keep his balance. #AnkleBreaker

The best chance of the first half fell to Medicine when they were awarded a penalty. Julian was harshly judged to have handled the ball in the penalty area. While there was no doubt that his arms were up, the referee failed to take notice of one very important fact – that his eyes were actually facing away from the ball. He clearly did not intend to handle the ball, and we know that one needs to prove not only the actus reus, but also the mens rea (my Crim Law A+ hor), before a conviction is secured. When asked after the match why his hands were up, Julian mentioned that he has been moonlighting as a tennis coach recently, and thought that he was still on the tennis court.

To everyone’s surprise, Medicine missed, with their midfielder blazing the ball over the crossbar from 12 yards. There was relief all round as we entered the dugout goalless after a sapping first half. 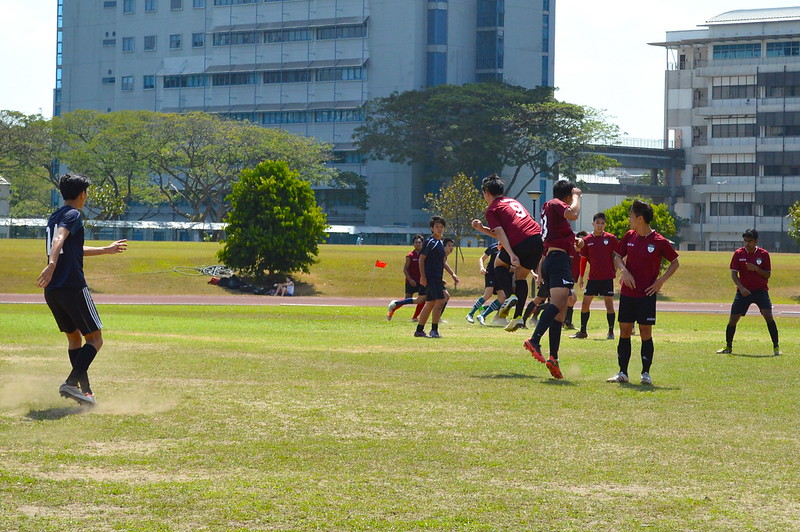 Medicine takes a freekick as Law’s Year 1, Clement (#9) puts on a theatrical act to convince the referee that he has been shot in the guts.

The second half started with much aplomb (like my hairstyle), with both teams playing excellent football and stringing passes together. Urged on by our unwaivering supporters at the stands, we finally got the breakthrough 5 minutes into the second half, with English striker George Avery getting on the scoresheet in bizarre circumstances. A defensive mix up following pressure from nippy winger Danial Hakim culminated in the Medicine goalkeeper’s attempted clearance rebounding off George and into the net. 1-0! 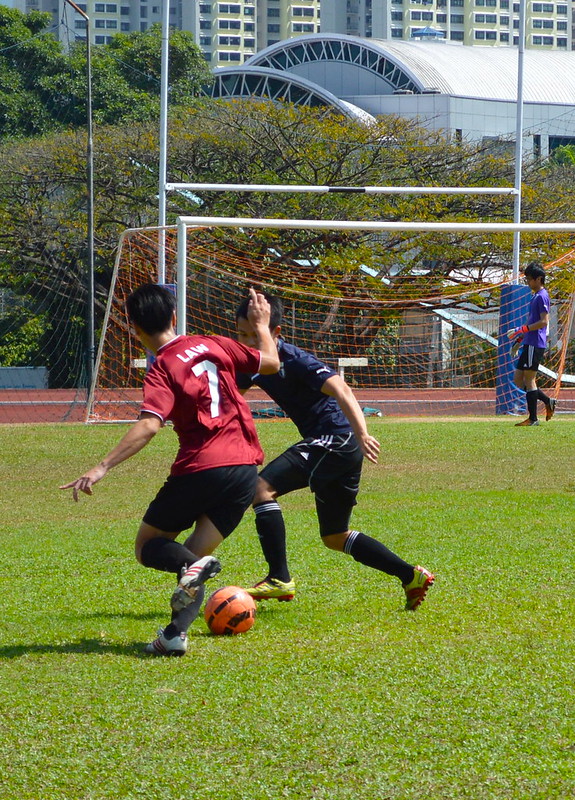 Team Law’s very own Luis Suarez, Jayden (#7) putting the moves on his defender.

Medicine started to push more men forward in search of an equaliser, and began to dominate proceedings. Hence, it came as a surprise when we got our second goal. The referee awarded a free kick just within the Medicine half, and Sudi stepped up to deliver the ball into the box. Sudi has the uncanny ability to find a teammate accurately from 40 yards, and he went one better this time round, finding the net from a full 50 yards! As the ball floated into the area, it evaded everyone and bounced straight into the top corner. 2-0, and revenge was almost complete. 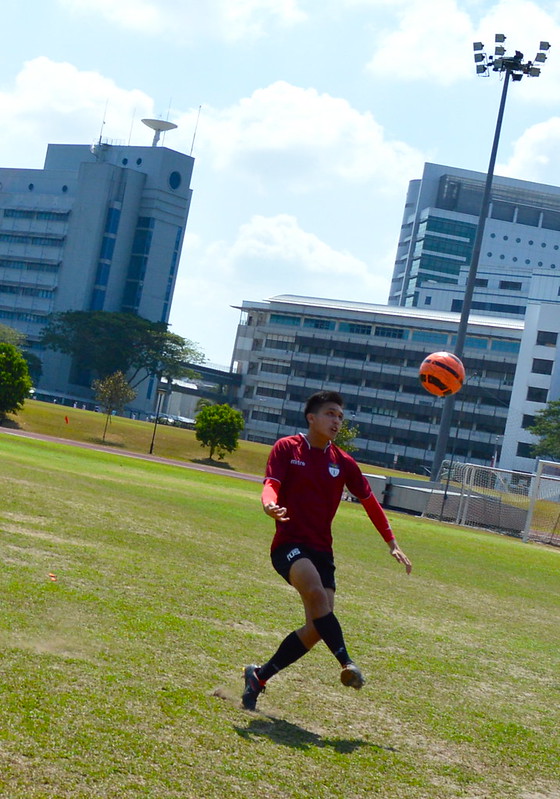 Exquisite control from Law’s rock at the back, Zenzel (Year 3) -Zidane & Cantona-esque control. Or Dimitar Berbatov if you’re too demanding.

Medicine was now desperate, and were finding a way back into the game. When the referee awarded yet another soft penalty in Medicine’s favour 15 minutes from time, they were presented with a golden opportunity to grab a lifeline. For the second time, impeccable goalkeeper Andrew Chua guessed the right way. For the second time though, his intervention was not necessary as Medicine sent yet another penalty kick into orbit. We could now see the finish line, and our supporters’ groans of displeasure just moments before turned into shouts of joy. 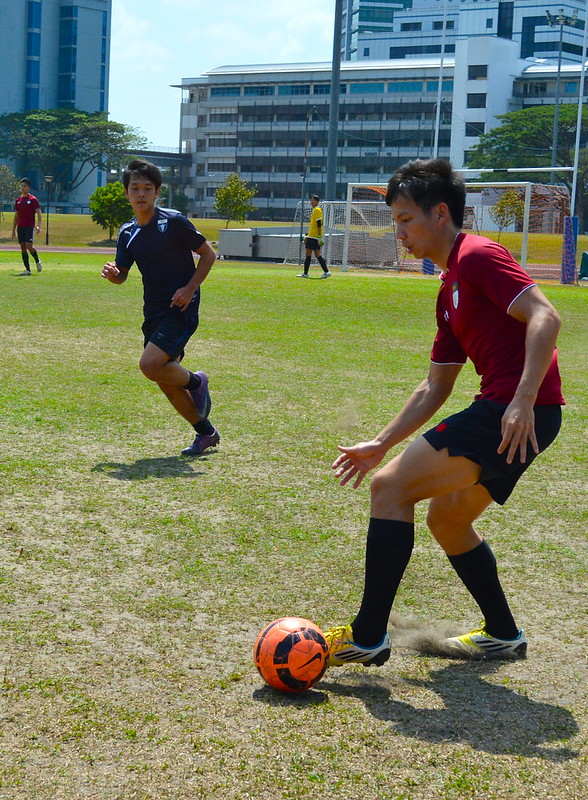 Poetry in Motion: a cross being teed up.

The excitement and fatigue started to set in for vice-captain Benjamin Goh at this stage, as he forgot his mathematics and reminded the team that the ‘SCORE IS STILL NIL-NIL’. No you muppet, it’s 2-0. No wonder you are in Law and not in Medicine.

2-0 soon became 3-0, as Jayden Chew teed up George Avery to bag his second for the day. George stretching to poke the ball past the Medicine keeper. Law was surely going to win this! Give the lad a knighthood already! 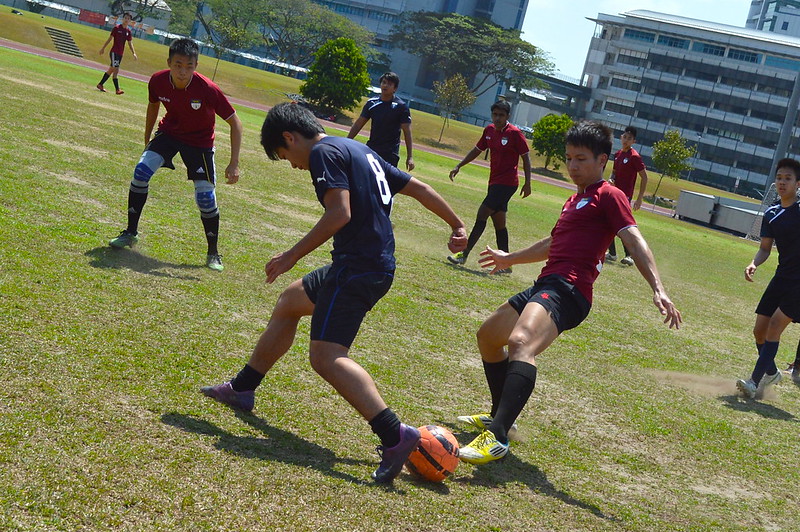 Just a picture of me looking very sharp and photogenic even when I eye-power the ball back into possession.

By now, the buoyant and effervescent Law supporters finally knew that the score was beyond doubt, and started to warm up for their LawMed frisbee game.

As soon as we hit the 90th minute, the referee made his first good call of the game, by blowing the final whistle (seriously, TWO soft penalties against us). With that, the Law men’s football team celebrated yet another memorable victory over archrivals Medicine, and put Law firmly on course to winning LawMed 2014, fingers crossed. 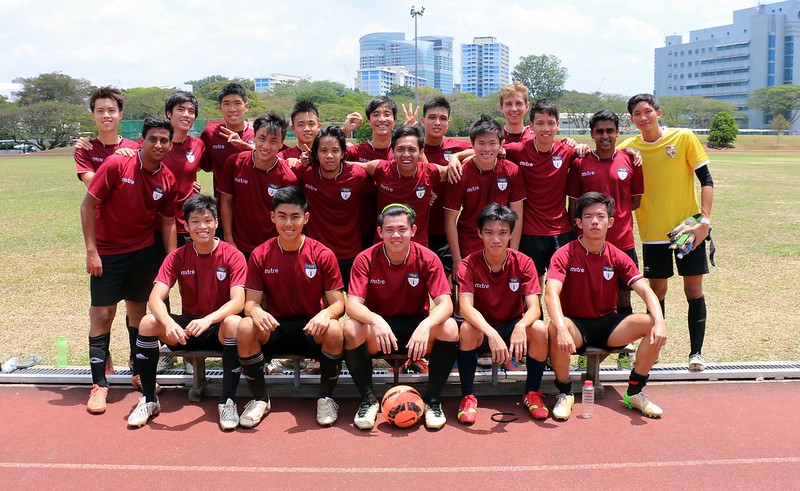 Captain Koo ‘Kaptain’ Zheng Xuan, on behalf of the team, would like to extend his heartfelt thanks to all who came down to watch the match and support us on Saturday. You guys were the twelfth man, and we could not have done it without you guys, especially after such a trying first half. We would also like to wish all the other sports all the best for their matches, as the other teams drop their suits and join the fight.