In summer frisbee is the delight of many. They put down their heavy books and pick up mercurial plastic discs. Young men and women gather in the fields. They train for the Games. Day after day they celebrate miraculous youth – by passing the Frisbee to one another. With a casual snap of the wrist, they guide the Frisbee on its way. It glides, almost floating, slowly through the air with an aloof, unbearable lightness that says “you’ll never be as carefree as Frisbee”.

But the crosswinds blew strong on the afternoon of 22nd February. It was a different kind of Game. A team of doctors-to-be engaged our very own in the Ultimate Frisbee arena. The rules were simple: get the Frisbee to someone in the end zone. As it turned out, those medical men had beaten us twice before. We, in red, were dark horses here, though our adversaries were the ones clad in ominous black. 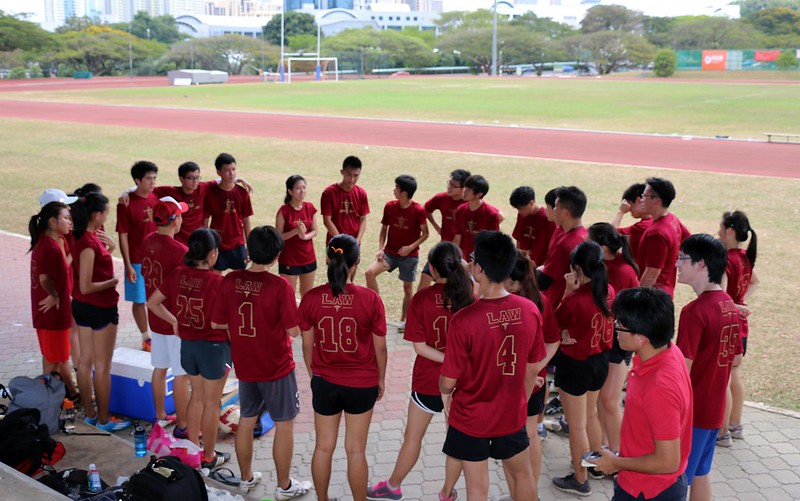 Team Law huddles up for a pre-game briefing

“In soccer they say the ball is round, but the disc is dictated by wind”, said team captain and WongP finalist Yong Quan as he braced us for the battle ahead. One could not help but ponder the profound wisdom in that statement, for are we not merely discs dictated by the converging winds of Fate and Time?

“Fight hard, and we have a good chance.”

And Fight Hard we did. Barely minutes had passed before Law scored the first goal of the game. Cap-bearing Danny perfectly weighted a pass from midfield to receiver Gerald in the goal area.

Not wanting to fall behind, Medicine countered with a long shot attempt led by one who appeared to be Med’s captain, for he was covered top-to-toe in black, and spent his time issuing commands to both teams alike. He sprinted beyond Law’s defence to receive the Disc in our goal area to equalize. 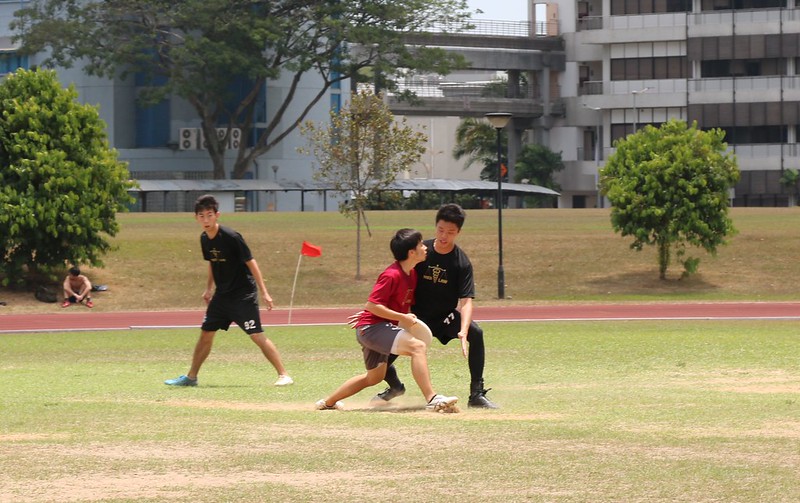 Med Captain keeps his eyes fixed on our Zhefei’s…Disc.

Medicine then scored twice in a row. A ridiculously tall Medicine player picked off a high pass near our goal area and converted. Behind 1:3, an athletic Fang Yi would dive headfirst for the Disc in the goal area to earn one back for Law. #TooFyreakingAwesome 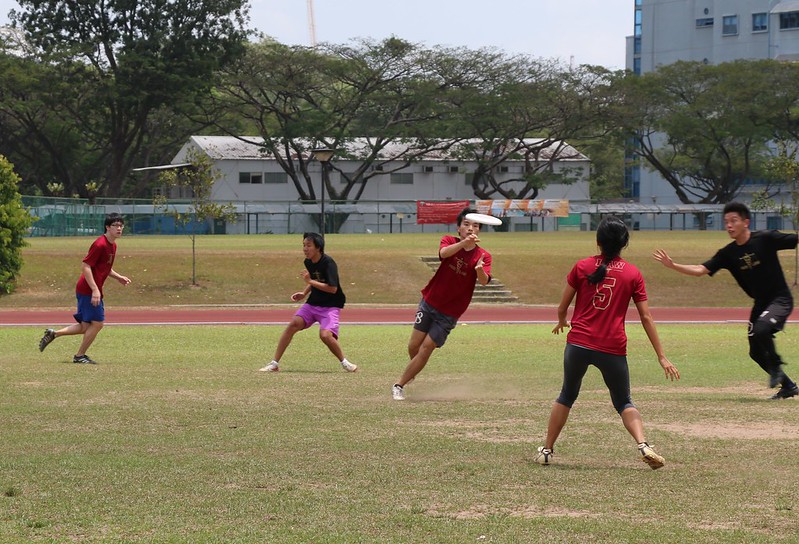 IVP star Zhefei summons the disc into his grasp, while Med Captain tries to use the Force.

Med repeated their earlier strategy and scored again with their forwards sprinting behind our defence. Trailing 2:4, IVP star Zhe Fei would expertly steal the Disc off a badly-timed Med pass. He dished it back to Wei Song and made straight for the endzone. Wei Song threw his defender off completely with a right-fake before sending the Disc securely into the IVP star’s hands. 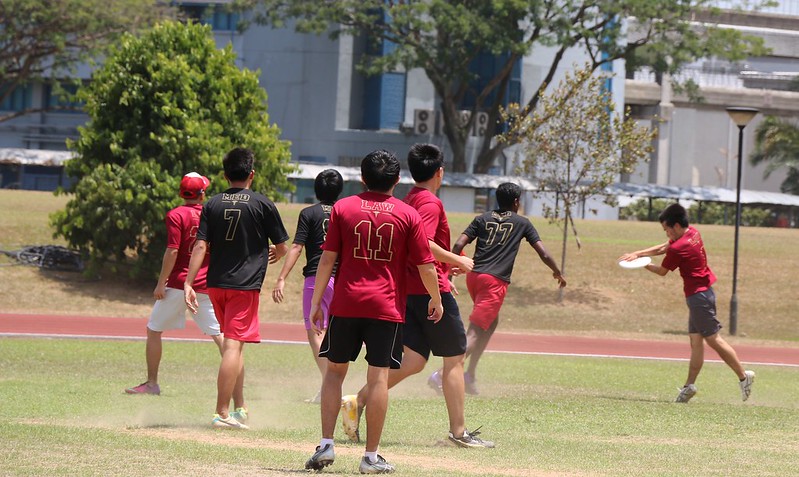 Zhefei sandwiches the Disc with finesse.

Med then managed a low pass into our goal to make it 3:5. Impressive, but at that moment a shipment of refreshments materialized at Law’s sidelines in true Law school fashion. More impressive. 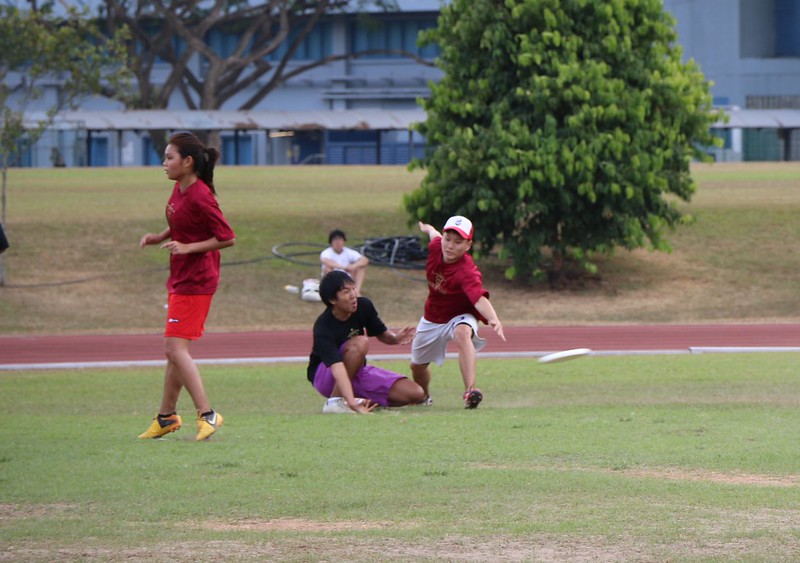 Med really went low on that one.

The score stayed the same for some time while both side’s attempts were frustrated by strong overhead winds. Law then managed to steal possession right at the gates of med’s goal before skillfully lobbing the Disc over the outstretched arms of Med’s defender to make it 4:5.

Law’s next attempts went painfully close to scoring, but each time the Disc fell just short of the end zone. Defending fiercely we forced many turnovers from Med, but each time we apparently committed a foul. The first half ended 4:7 with Med scoring twice more.

“Remember the fundamentals, defend smarter and pre-empt attacks. The sidelines can call out to players on the field” — such was the advice from the three experienced team captains during the break. Law was determined to put up a fight in the second half.

So we did. Law’s increase in tempo was hard to miss. Year 3 Jason led team Law in putting up a fierce defence, intercepting passes and laying down the smackdown on many a poorly timed pass from our opponents. IVP star Zhe Fei and Danny controlled possession expertly in the mid-field, trading accurate passes. In the midst of this our Y1 players were rotated into the game and brought a fresh burst of energy to the team’s efforts. 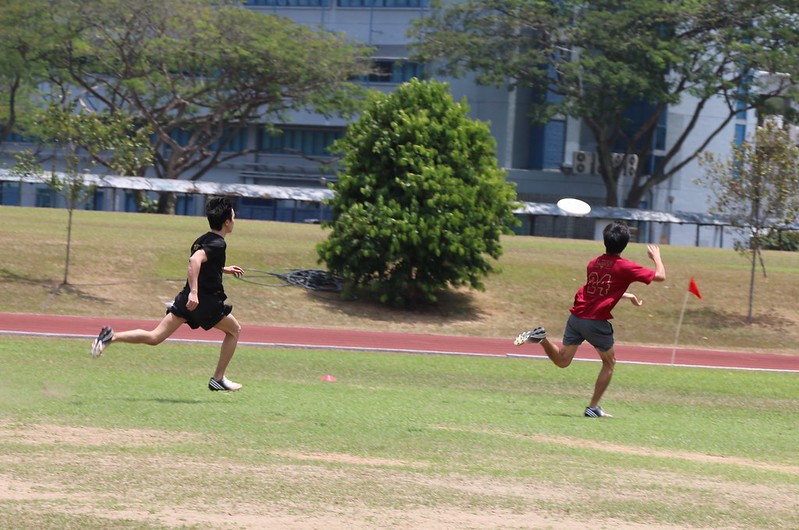 Breaking free of his defender, Jason Lim (Year 3) receives a long pass near the endzone.

But the crosswinds blew strong on the afternoon of 22nd February. And as we were reminded, the Frisbee is dictated by the winds — the same winds that kept the disc airborne for our adversaries to score a few more times. As the game progressed it became evident that Med had much more experienced players to weather the storm. 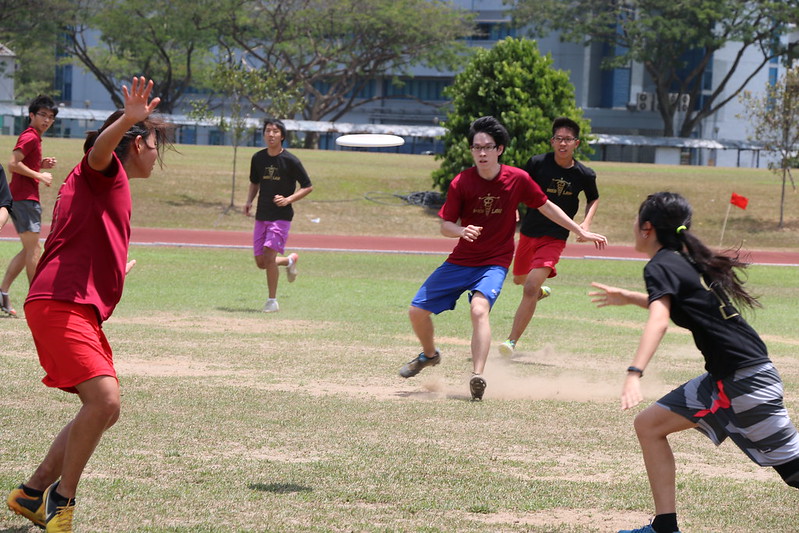 Both sets of players struggle to follow the dance of the disc.

Team Law continued to fight hard even though we were down 4:11. We fought so hard two of our players — Yong Quan and Fang Yi — got injured while diving for the disc. (But don’t worry, a horde of doctors-to-be were on them in no time.) 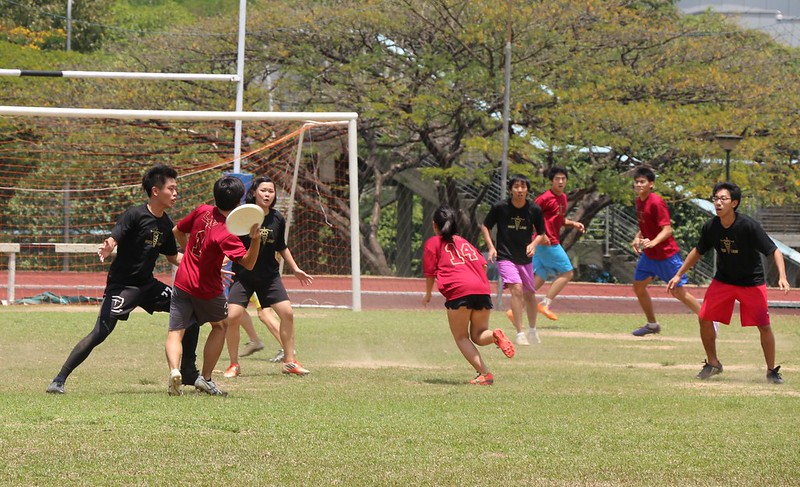 Zhefei fancies a pass to Fang Yi, who lurks near the endzone.

And we carried on fighting. With two of our best players out of action, rising Y1 star Joel Tieh would enter the game and win two back for Law: The first right after Fang Yi got injured, and the second when he received a mid-ranged pass off a skillful back-and-forth between Danny and Zhe Fei. With the score at 6:11, top-to-toe-in-black Med captain would venture to our sidelines and clarify that we were playing to 13. So they only had to score two more. Joel was still playing then.

The game ended 6:13 after Med, to their credit, scored two decent points. A high pass from Law was intercepted near our endzone and they promptly orchestrated their offence via a small lapse in our defence. Finally, a short low pass found a Med receiver in the left corner.

Thus the epic engagement ended, and the final Frisbee flew. The athletes from Med and Law alike gathered in a circle to thank one another for a great game and wished each other well. Tension evaporated into friendship. Once again order was restored on the afternoon of 22nd February. 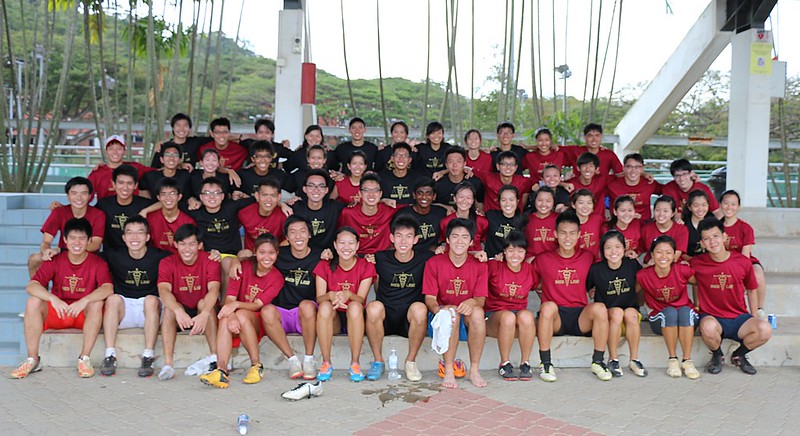 Whatever rivalries there were melt away as red weaves into black. That is, until next year.