* Rookie reporter disclaimer: I don’t really like watching soccer matches (heck, I could count the number of soccer matches I’ve watched on my fingers) and conveniently deafen myself when friends talk about Man United, Chelsea, Arsenal. But I got to admit, this was one riveting match to cover. 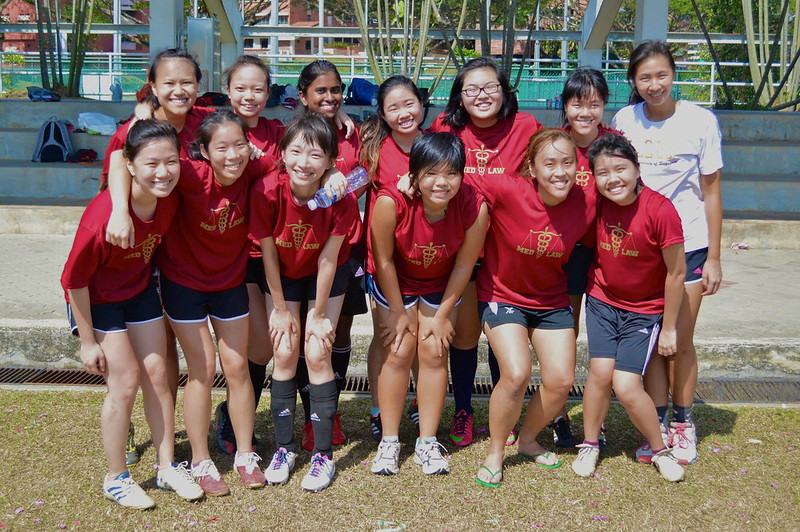 A pleasant Sunday morning; mildly cool weather; not an angry but a mellow sun- ingredients for a perfect match day.

The exact opposite is what you can be assured of battling with when you have a soccer match to play ’cause… Murphy’s Law 101.

With the score reaching Law 3: 3 Med the night before, tension had climaxed even before the commencement of the women’s football match. This match could swing the score either way, giving the winning team a motivating lead. 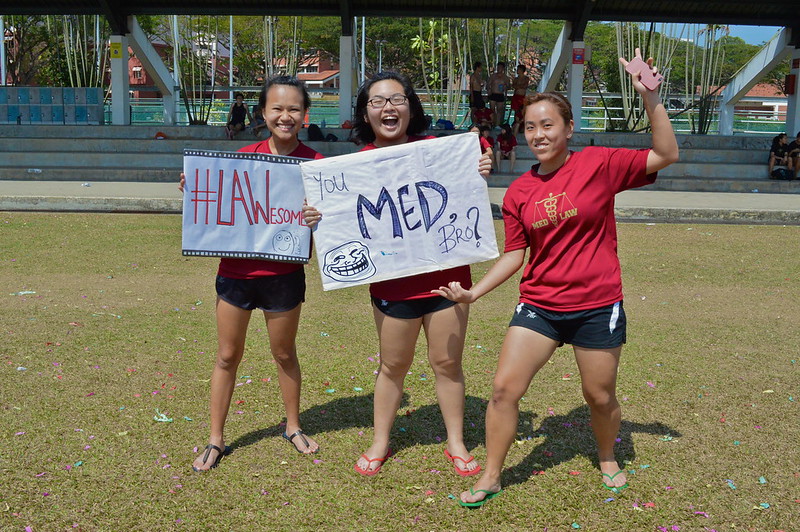 No pressure at all, just horsin’ around all day. Also, note that the grass was still green amidst the famine and drought throughout the island.

One’s instant reaction would be: That’s no pressure, law girls… none at all. 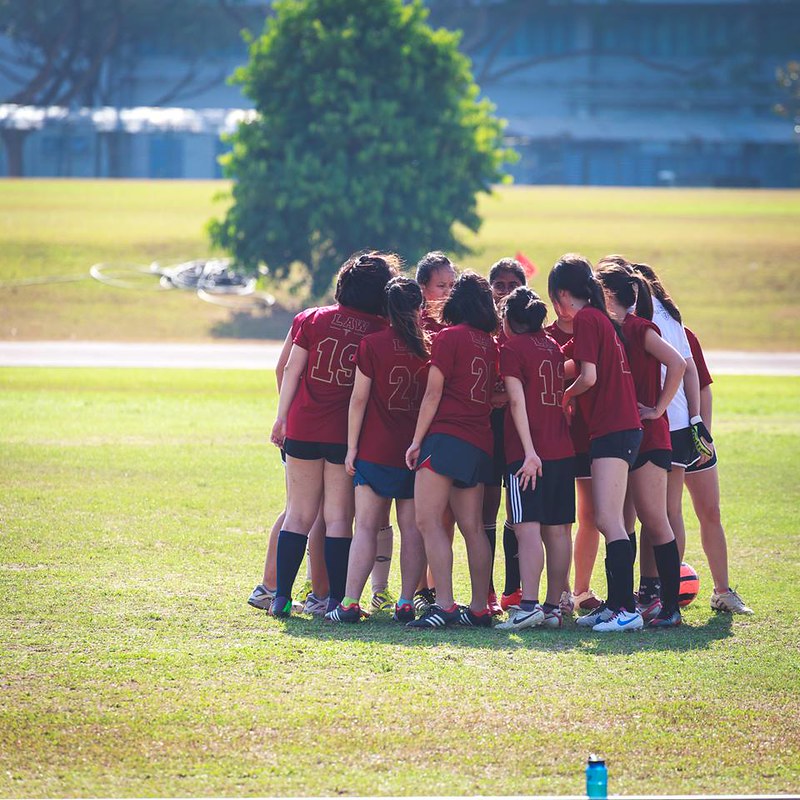 The law team, led by Captains Jolena Ang and Qianyu, trooped into the battleground field-scape with the zeal and combative spirit to prove their mettle against the defending champions, Medicine. Then the referee’s whistle indicated that the blood battle could now begin. So, barely two minutes into the game, the Law team was quick to grasp that Medicine was out on the field to intimidate. Law played on the defensive, trying to gauge the enemy’s stratagem before distilling their own game plan, a one that would be a blitzkrieg to the Medkids. 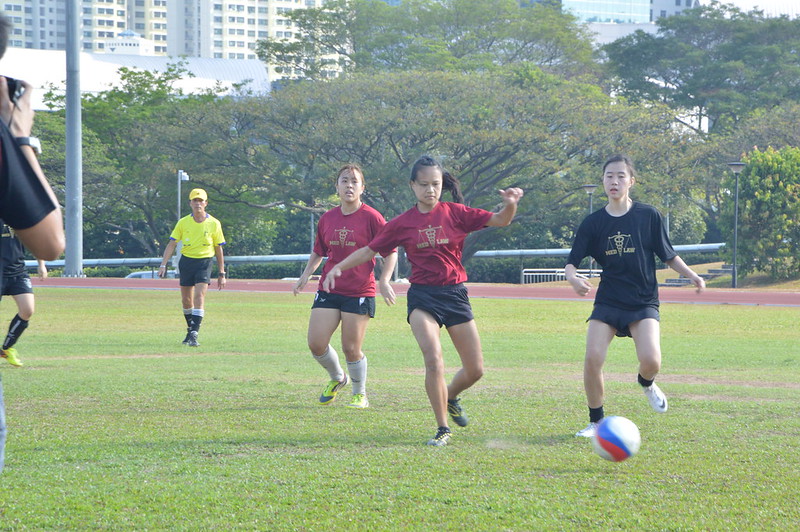 Law Club Welfare Director Charmaine (Year 2) dances with the ball like Cristiano does, as she does her part to gain some welfare for the Law school with the hope of clinching the Foosball tab… Oh wait it’s no more.. 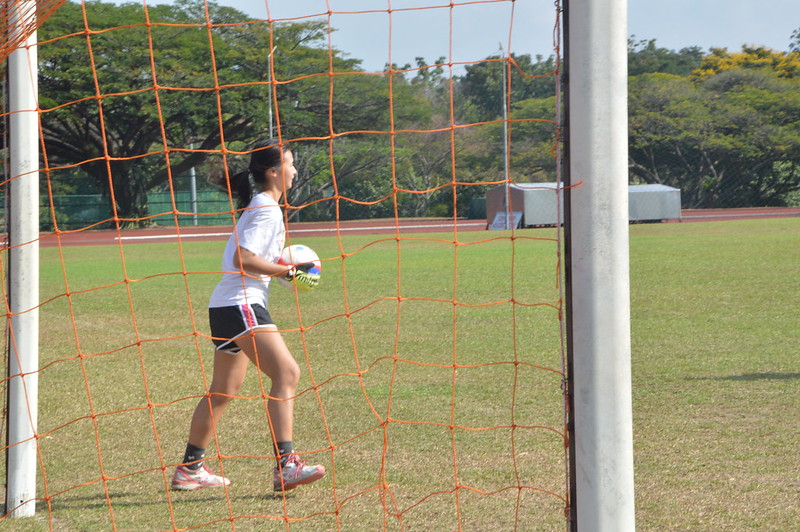 Netball legend, handball superstar and the face of NUS Ridge View Residential College, Jaime Lye (who is so popular that she can be found on Google Images) is no stranger to celebrity stardom. Stands in for Team Law as the adjunct goalie. Law wins. Draw your own conclusion.

Imagine placing the game, quite literally, in the hands of a first time soccer match goalkeeper, Jaime. It was commendable how she defended her fortress from the repeated assaults of the bursting-with-confidence Med team. The defenders Charmaine, Andrea, Anu and Joelle did a beautiful job at keeping the ball out of the middle of the field and fought their best for the ball. At the same time they courageously fought off the attacks rained on them by the unabashedly fierce Med girls.

“Everyone has a place at the starting line and a chance to reach the finishing line… If we do not falter, we can fulfill our dreams.”  (Vinna Yip Kai Mun, student, 11, National Day Parade Book 2003 (2002) at 40, online: <http://www.mindef.gov.sg/dam/publications/eBooks/More_eBooks/NDP03book.pdf>) 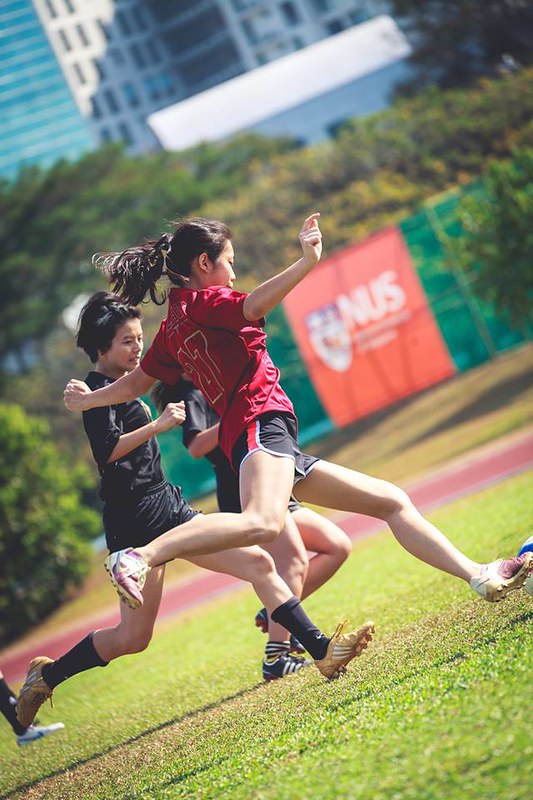 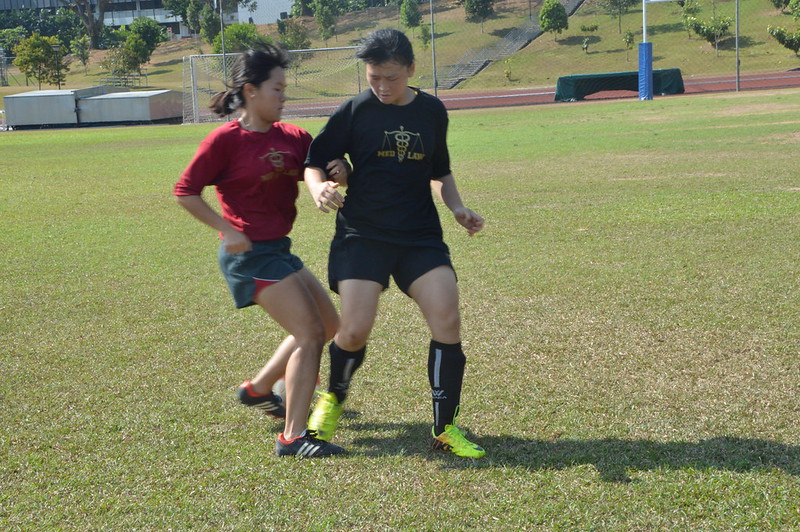 Part B student Andrea Tan goes up against her former RJ teammate. She manages to confuse her defender with an agile change of direction. Nimble feet like Iniesta.

During one of the confrontations, Jannelle showcased tremendous gallantry as she tried to snatch the ball from the opponent. The enemy did, however, manage to invade our fortress taking them unawares. 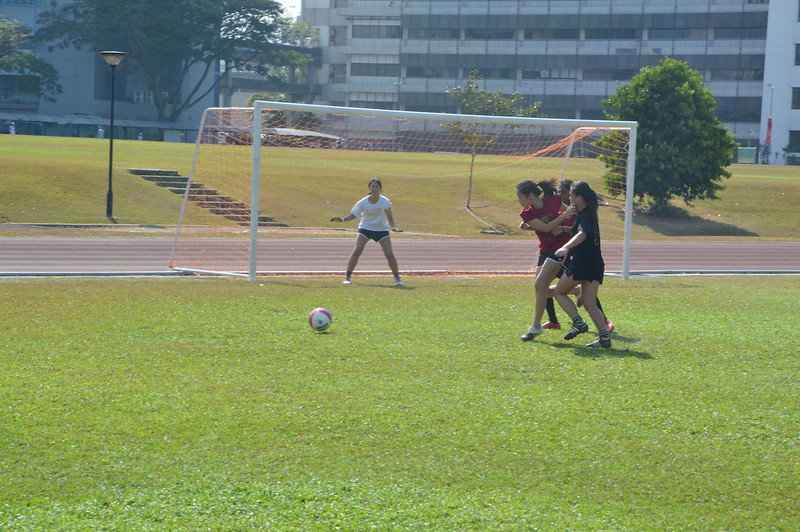 Vinna Yip (Year 4) jostles and jockeys for position to get to the ball – emotions were running high and here Vinna looked ready to lay the Smackdown on her opponent with a possible choke slam.

The score: 1-0 but there were 2 more sets to be played and all had not been lost.

The team huddled and hydrated themselves during what reminded me of Al Pacino’s classic speech in Any Given Sunday.

“You find out that life is just a game of inches. So is football.

Because in either game – life or football- ”¨the margin for error is so small.

I mean, ”¨one half step too late or too early”¨you don’t quite make it.

One half second too slow or too fast”¨and you don’t quite catch it.

The inches we need are everywhere around us. They’re in every break of the game, every minute, every second. ”¨On this team, we fight for that inch.

On this team, we tear ourselves, and everyone around us”¨to pieces for that inch.”

And this is exactly what Jolena, the team captain, told her team (paraphrased, of course). She clearly identified the problems with the playing stance they had adopted and told the team they needed to be more aggressive in their approach. But working on your good points is never enough till you can attack and capitalize on the weak points of your opposition, is it?

Tricia made her observation clear: Medicine made bad passes (and no, this has nothing to do with their flirting abilities, please.)

It was as simple as that. If the Law girls could successfully press the person in control of the ball and the one who penetrates into the you’re-too-close-for-comfort zone, it would ensure that Medicine would fumble in making good passes and our team would be more than happy to step in *wink wink* 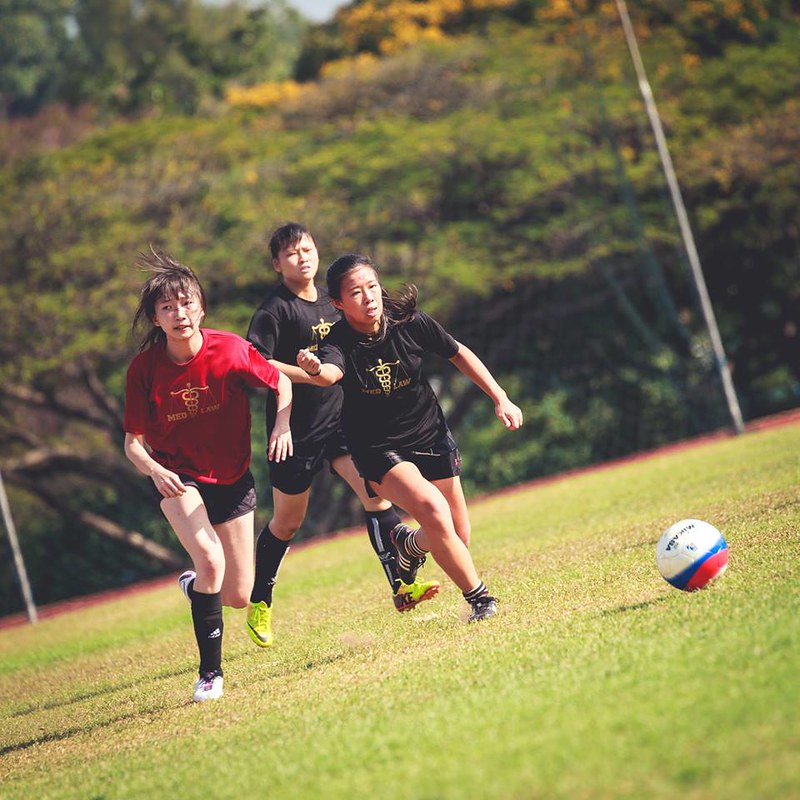 Chng Yan (Year 3) goes into gear 6 as she chases down the ball. She would go on to play an instrumental role in Law’s victory. But you need to read on. (Copyright © 2014: Colin Ng, NUS Medical Society Media Division)

Rising Action: With recharged bodies and renewed spirits, the girls now switched on to ‘attack mode’ and brought their ‘Sasha Fierce’ out. Their team spirit on the field was palpable. Also, given that Law had the advantage of more players, we could afford to send in substitutes. This really helped in maintaining the pace of the game.

The 2nd innings was dominated by Law. 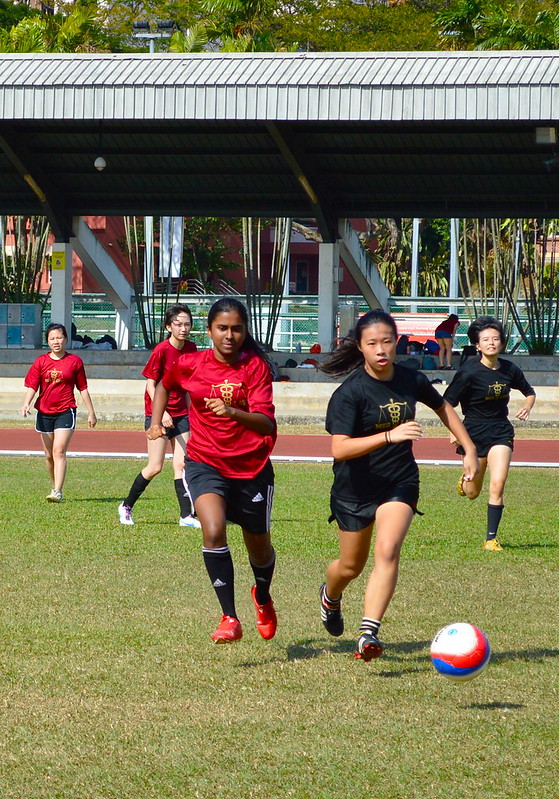 Anu (Year 2) looking dead determined in a head-to-head battle with her Med opponent. Those matching boots are also to die.

They kept the ball in opposition territory for the majority of the time and repeated attempts were made at getting the ball into the net. But, the ball just seemed to simply sail over the crossbar. Jaime was so calm and assured of her teammate’s abilities that she trustingly left her post and went down all the way to NUS Ridge View Residential College for her Prospectus 2014 photoshoot.

Meanwhile, Jaime chilled. This just goes to show the prowess of the girls during the second set as they were able to engage the Med girls such that the ball only rarely ever traversed to the other side. 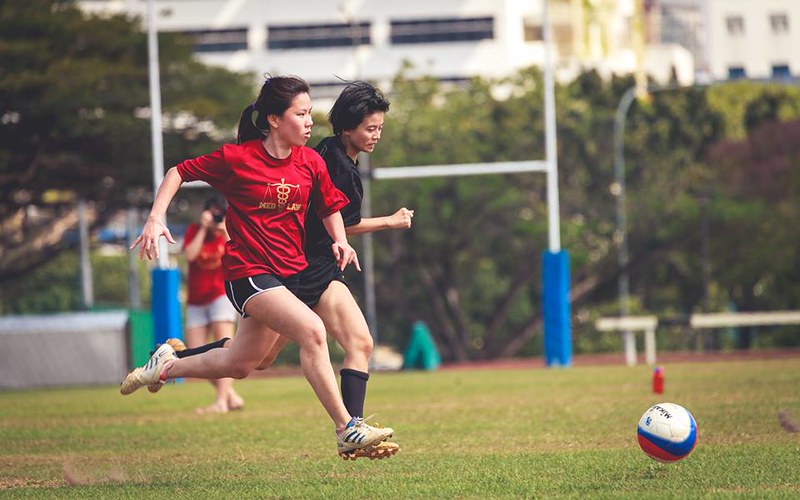 And then Wanyi, much like a soldier who was by now fed up of the multiple attempts at scoring a goal, charged towards her arch rival’s goalpost and gave the ball a kick that you would, trust me, loved to have watched in slow mo on high def if not for the skillfully maneuvered kick, then for the look of sheer and unadulterated shock on the Med players’ and supporters’ faces.

* The emotions expressed here may be exaggerated for the sake of prose and reflect no such feelings of fierce competition since it is after all, just a “friendly match” *

It was now at 2 all. Talk about a climatic moment, this was it. 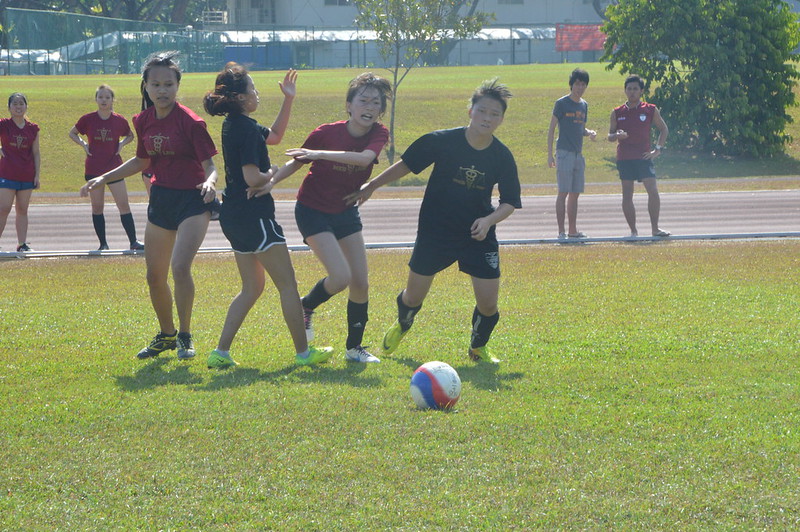 Tempers flaring in the game evident from the players’ faces. Also the dust, much like the game, was far from settled.

Now, it could really swing either which way. This time no strategies were sought, one just had to ‘do or die’. 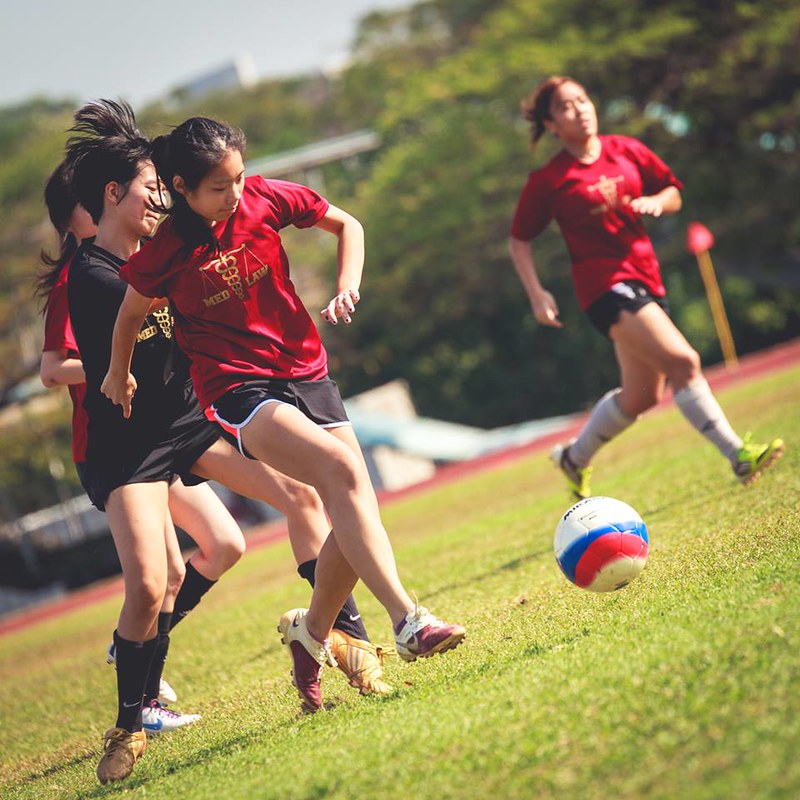 Vinna with a deft touch to create space for her next move. Vinna reminds opponents and her friends of David Beckham with her virtuoso dominance of the game and her good looks. Except Becks has less swag. (Copyright © 2014: Colin Ng, NUS Medical Society Media Division)

Scurrying back and forth, both teams seemed desperate for glory. Vinna almost had a goal but like they say, nothing ever worth having comes easy. And, if at any point of time the Law girls’ spirits were flagging, the infectious enthusiasm of this one law student (I wished I’d asked him his name), playing the match vicariously, saw to it that they sustained themselves at the summit. (sadly, our sustenance too, rests on the Summit)

The match just got more and more intense with each passing minute. Just one goal was what was needed for us to win, one goal to tip that balanced score to our side. Time was ticking by and …. 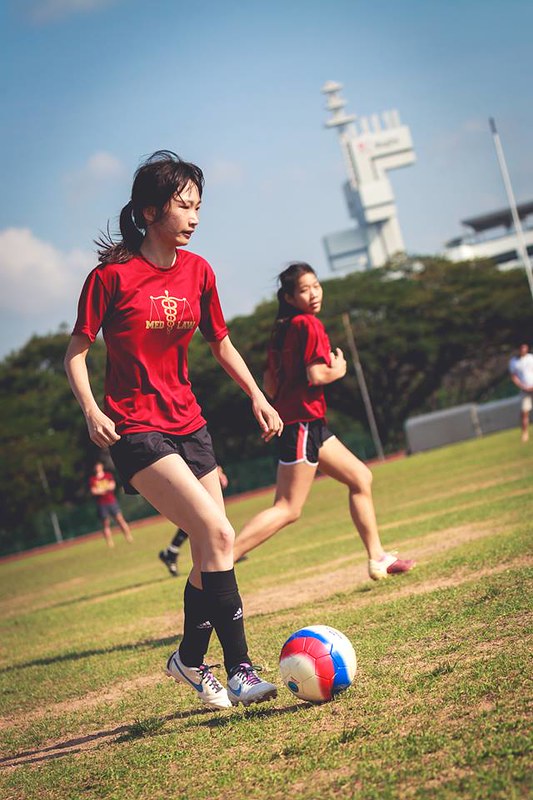 …and then, something LEGEN-wait for it-DARY happened, Chng Yan scored that winning goal. The law girls had won and how. 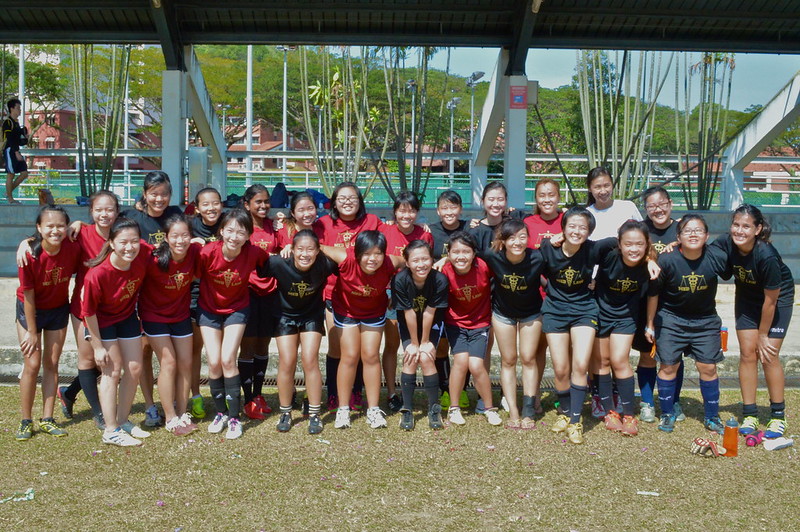 P.S. – Thank you to all the Law-yal fans for coming down! Your support, shouts and squeals spurred the girls and made the fruit of the toil even sweeter!