This year’s LawMed Debates and Closing Ceremony were combined into one big finale, to ensure a nail-biting conclusion to what is often a photo-finish, first past the post and ultimately arbitrary affair where one Faculty is commonly declared the winner of some lame trophy that no one cares about. Unless Law wins, in which case, that would be an entirely different matter. In actual fact, the events were held together so that we (the Sports Directors) would only need to organise one event instead of two. A secondary consideration was that the Lawmed Closing ceremony would take place in recess week, and we needed some people to actually turn up and create some sort of atmosphere. But not so many such that we had to cater a lot of food. So it was perfect, for us at least.

The eternal LawMed MCs Ram and Yahya, who are always brilliant, kicked off the day’s proceedings, engaging in banter about who is going to win LawMed even though it really doesn’t matter.  “Everyone’s a winner”, as Yahya very astutely pointed out. The debates commenced, with Law proposing the motion “This House believes that Lawyers make better Criminals than Doctors”. It was then time to introduce the judges. Dean Simon Chesterman, ever a good sport and always supportive of faculty events, was the Law representative amongst the judges. The Assistant Dean of Student Affairs Marie Veronique was present on behalf of Medicine . Last but not least, we had a neutral judge, Peter Backhouse, an exchange student from the UK who somehow ended up in our humble moot court.

Facing off against a rather young and humbly dressed Medicine Team, our debaters looked profoundly superior in the Law School uniform, sporting well-tailored suits to simultaneously intimidate the opposition into submission and impress the judges with an immaculate sense of style. 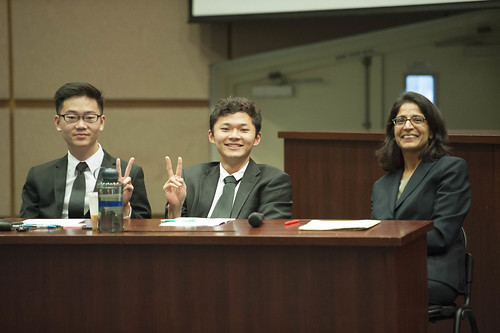 Our immaculately-dressed debaters warming up in front of the camera. 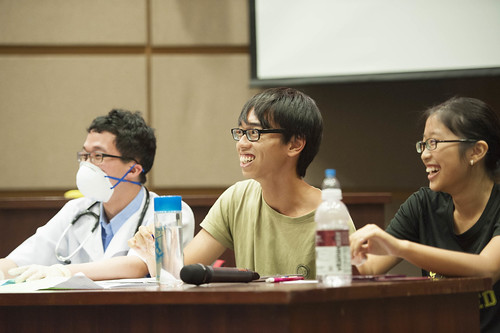 The Medicine team, all smiles (for now).

First Speaker Professor Sheila Hayre won the debate from the outset, outlining the arguments before appealing to the audience and judges to disregard any logical arguments, and simply decide based on common sense that clearly, lawyers make better criminals than doctors. She then proceeded to silence the Medicine bench with a casual throwaway line: “Are any of you Professors? Didn’t think so”. The medicine representatives, did as all good Singaporeans would, and respectfully refused to question any of Prof Sheila’s assertions, simply because she was a Professor and Professors know best. Or perhaps they were just simulating what happens every lecture when the Prof asks a question.

Out of the kindness of my heart, I shall skip the portions about the Med Speakers. Except to say that they put up a really awkward skit, and the last speaker made some decent points. Truth is, I’m skipping it because I can’t remember what they said; I was too busy sitting there in awe of the performances of our Debaters.

Second Speaker Pek Wenjie delivered on all the promise about his speaking prowess that I had been building up for him, painting a picture of virtuous Doctors, slimy lawyers and degenerate criminals who really share a lot in common with slimy lawyers. His arguments were absolutely brilliant and his diction and pacing, perfect. There were times where I swear it was poetry in motion as he rhymed, alliterated, analogised, hyperbolized and I can’t think of any more poetic devices (Pek is a renowned poet by the way, he is renowned because I’ve read his poetry, therefore). His first argument was prefaced with a Chinese Idiom “è¿‘æœ±è€…èµ¤ï¼Œè¿‘å¢¨è€…é»‘” which loosely translated means “near red person red, near black person black”. Sounds rather racist to me but what’s new, Chinese people are racist. What he actually said was “lawyer spend time with criminal, lawyer become criminal, Doctor spend time with old ailing granny who do good all her life now sick go see doctor, doctor become good”. That’s the gist of it, at least. Sounds legit in my head. He did actually put it across in a much more compelling manner — “guilt by association”. His second argument — that the inherent morality of the practice of law leads to crime — was a masterstroke. It was such a mind-blowing argument that the Medicine team had no way to rebut that. At that point, I’m sure I understood it, but such was the cunning nature of his argument that understanding eludes me now. 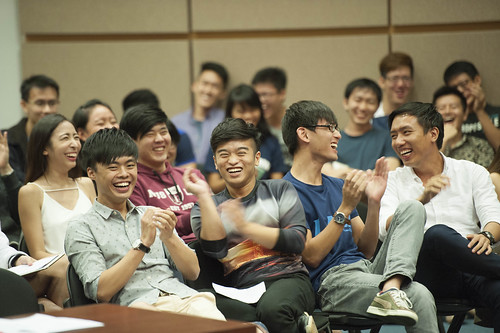 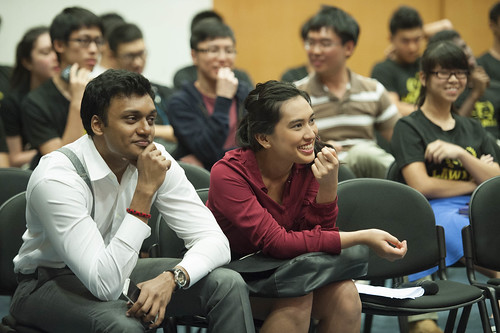 Evidently, people were having a whale of a time watching the debates.

Finally, Joshua Hiew stepped up, and stepped into the centre of the stage, decked out in a perfectly fitting suit and tie and held in his hands a deck of cards. My first thought was “What the hell, is he going to perform a magic trick?”. He didn’t. But he might as well have. Once he started speaking, the audience was held spellbound by his charming and flawless delivery. The irrepressible force that he was could not be interrupted — he uttered a polite yet condescending (that’s exactly how it was, I still don’t get how that is possible) rejection to a point offered without even breaking stride from the iambic pentameter with which he spoke. By the time his trick was over, the audience erupted in warm applause and without a doubt, the competition was over. This author was also held spellbound, and simply cannot remember anything about his arguments except there were two questions, which he answered in the negative himself with a rather melodic and somehow insanely hypnotizing “mm-mm”. If I said “mm-mm” in any situation, I’m pretty sure someone would slap me across the face, “mm-mm what?! mm-mm your head ah! Mm-mm!”. Such was the potency of his dark arts that instead, every audience member, law or medicine, simply sat there nodding in agreement. 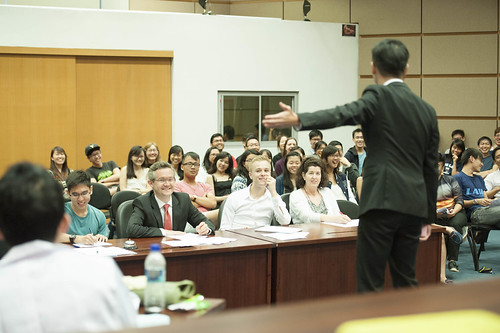 Joshua speaking to his captivated audience.

The debate concluded with the reply speeches, before the judges took the time to deliberate and a massive contingent of 60 Medicine Dancers appeared to chase the audience from their seats and put up a performance that was as creative as their use of the limited space in the moot court. 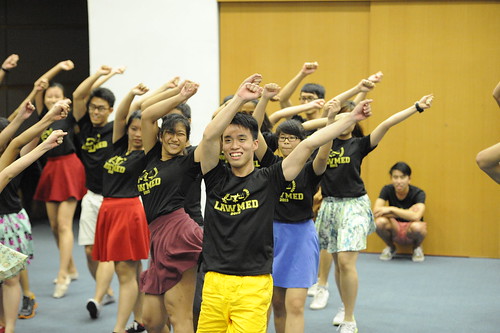 Before long, the judges returned and announced the winners of the debate. For once, we won. For once, it wasn’t a surprise that we won. Joshua Hiew was also named the best speaker, in spite of the fact that no one could remember what he talked about. In truth, maybe it’s just that I can’t remember anything anyone talked about because I was so entertained I forgot I needed to write an article. 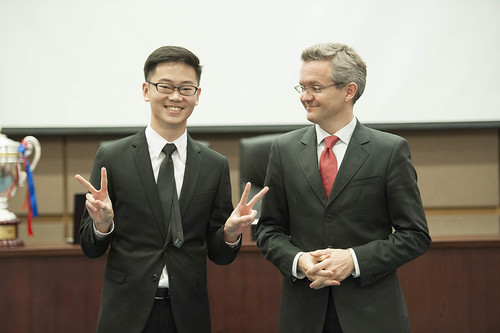 After the winners were announced, the event started to draw to a close, with both Dean Simon Chesterman and Joshua Woo the Sports Director making speeches that attempted to take attention away from what was an absolutely criminal massacre and end the event on a feel good, everyone-is-a-winner-lawyers-and-doctor-will-need-each-other-one-day kind of way. The prizes were then given out for the other competitive LawMed events before Ch’ng and the Bengz overpowered the sound of growling stomachs in the audience with their sultry voices and dance moves and exhalations that bordered on not-safe-for-lawschool. Finally, it was time for food. Which was a decent way to end Lawmed 2015. 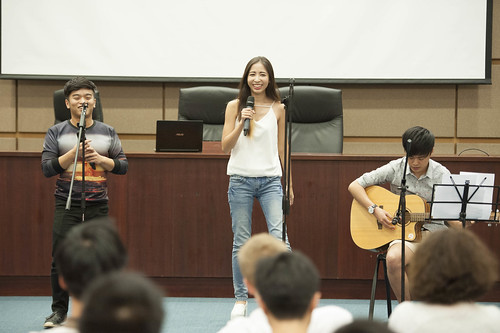