Out of 120 or so Year 1 and 2 participants, 2 NUS and 2 SMU students made it to the finals. Representing SMU were Shriram Jayakumar and Wong Yan Yee, champions of the 2014 Harry Elias-SMU Moot and 2014 Attorney-General’s Cup respectively. No fear – as the representatives of NUS (who both uncannily share the same first name) did not pale in comparison. Jonathan Trachsel (Y2) (“Trachsel” for the purposes of this article) is formidably both a Rodyk mooter and a Dean’s Lister, while Jonathan Wah (also Y2) (“Jon Wah”) was Law King of the 2013 NUS Law Pageant, a high honour that literally no SMU student can ever achieve. 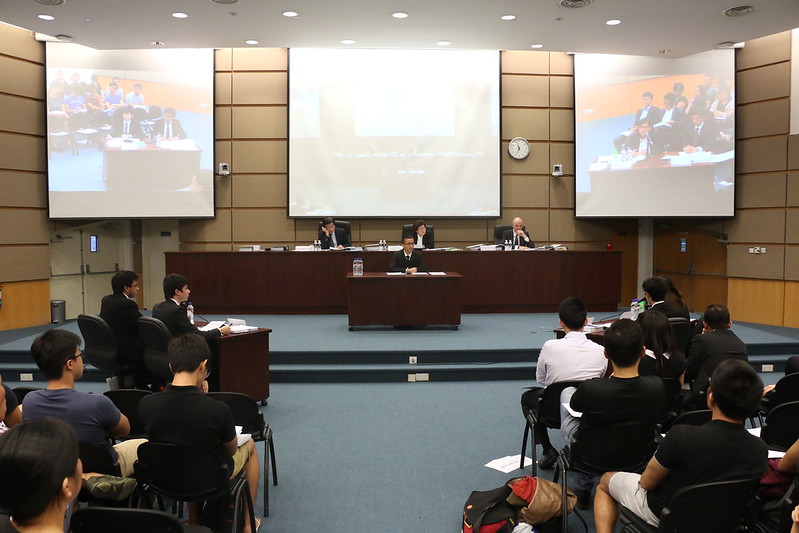 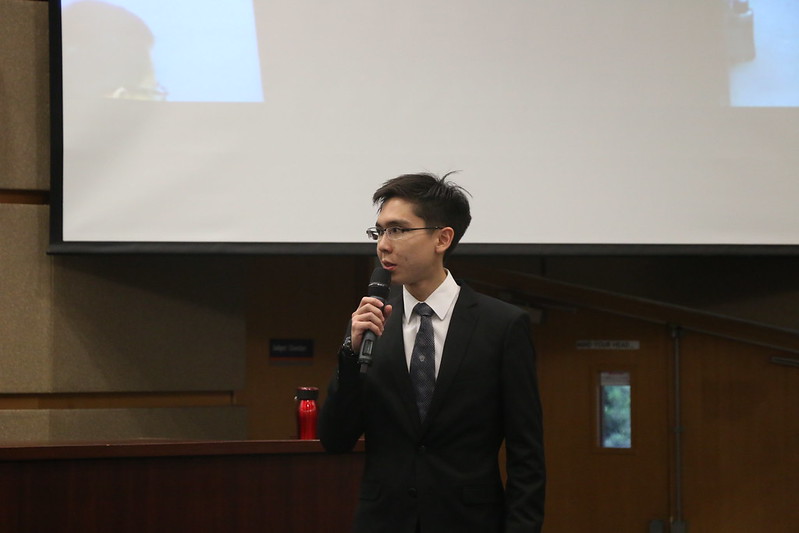 Serving as Arbitrators for the night were Mr Michael Green QC from Fountain Court Chambers, Justice Belinda Ang and Mr Christopher Chuah, head of WongP’s infrastructure, construction & engineering practice. Given the lengthy and accolade-filled introduction of the judges, it was clear that all four finalists would be in for a gruelling time.

The moot problem at hand concerned a supply agreement between the Claimant and the Respondent, where the Respondent had contracted to supply and deliver to the Claimant a quantity of Bushmaster Advanced Combat Rifles. A couple of months later and prior to delivery, the Respondent developed a new line of weapons which it aggressively marketed, leading to a drop in the market value of the Bushmaster rifles. The issue before the tribunal was:

1) Whether a duty of good faith should be implied into a supply agreement between the Claimant and the Respondent, and whether such a duty has been breached

2) Assuming there was a breach, whether exclusion clause 10 of the supply agreement applied to exclude the losses sought by Claimant

Acting for the Claimants were Yan Yee and Trachsel, while Jon Wah and Shriram acted for the Respondents. 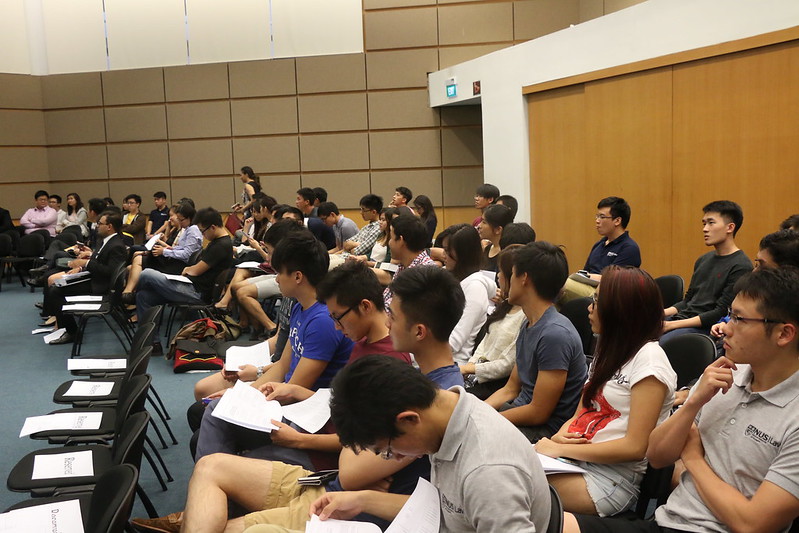 First up before the Tribunal was the issue of the duty good faith, which saw Yan Yee clash with Jon Wah. Barely having made headway with her first submission, Yan Yee had to face questions that came fast and furious from the tribunal. If you (like this author) are wondering how the said Bushmaster rifles might look like in action, witnessing Justice Ang relentlessly press her for definitions might suffice as an approximation.  What does good faith mean? What does near future mean? What is a relational contract? Unfazed, Yan Yee’s furnished her responses with smiles and an admirable amount of zen. 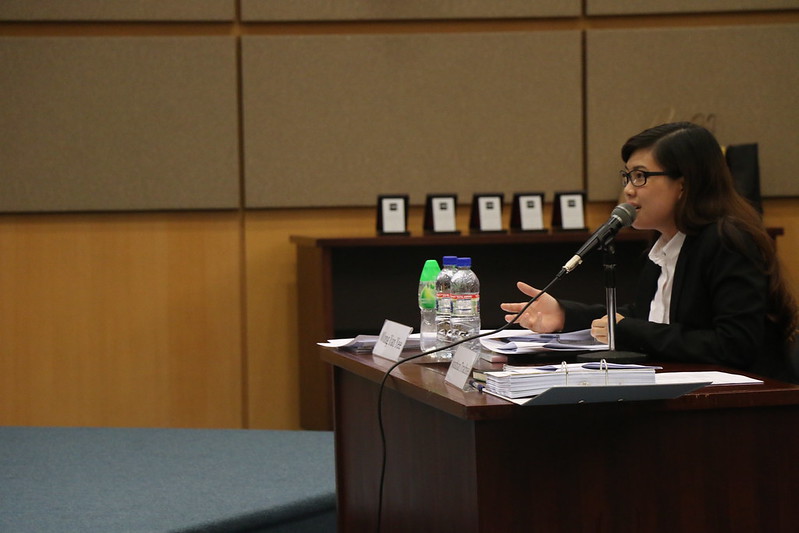 Looking to demolish Yan Yee’s arguments, Jon Wah commenced his submissions by proposing that the authority relied upon by the Claimant was in fact not the leading authority in Singapore. Like his opponent, Jon Wah was inundated with interruptions from the Tribunal and found himself in a little quandary, having to explain away a problematic descriptor in the supply agreement to Justice Ang who was clearly not going to be easily convinced. The two engaged in a rather extensive exchange before Jon Wah, with much nifty argumentation, earned an “alright~” from Justice Ang. 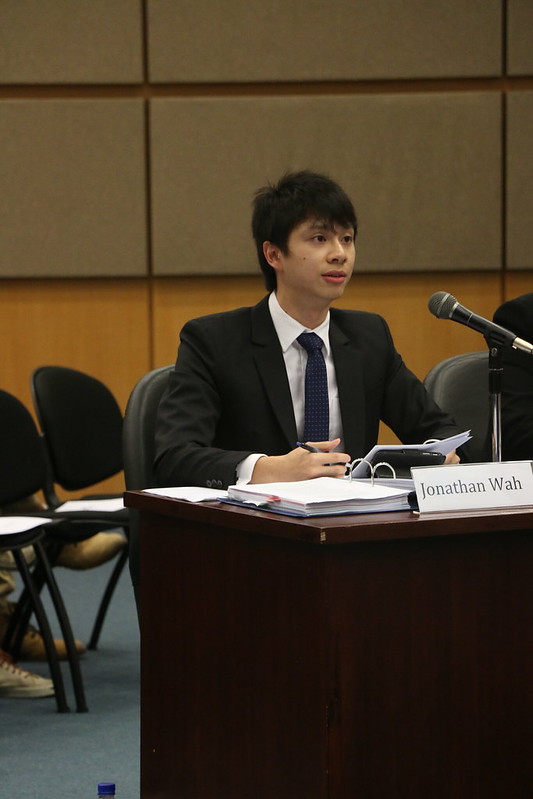 Next were Trachsel and Shriram for the second issue on the applicability of the exclusion clause.

Trachsel delivered his submissions with poise and clarity, guiding the Tribunal through his interpretation of the exclusion clause as applying to only indirect losses and that the losses suffered by the Claimants were not indirect. Queries from the Tribunal with met with steady and concise replies. Interesting moments that cropped up during his submission include “Can I ask why you are not with me? …let me try again” in response to Mr Chuah’s hypothetical and Justice Ang’s thought-provoking suggestion that the claim for a loss of profits could be re-characterised as a diminuition of value. 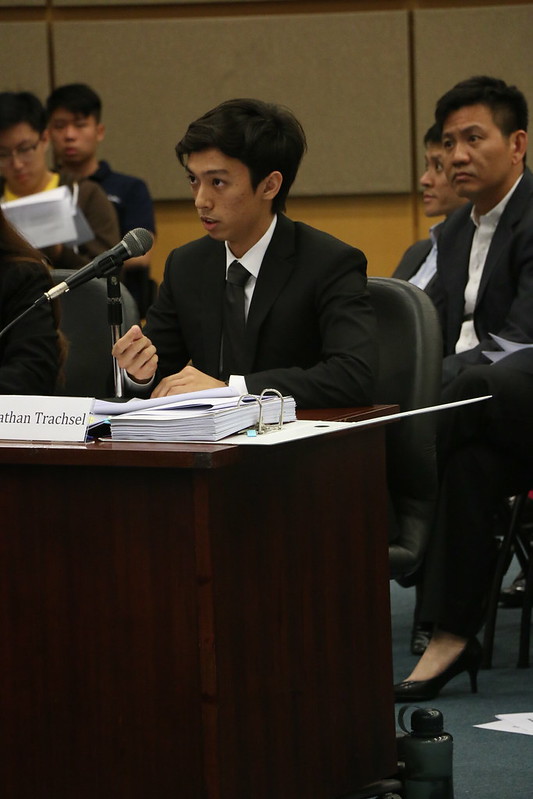 Shriram, the final finalist for the night, sought to counter Trachsel’s arguments by saying that the losses suffered by the Claimant were indirect. Part of his argument included knowledge and special circumstances which triggered the applicability of the exclusion clause but this author cannot elaborate further because her transcribed notes were not making any more sense by this stage owing to fatigue and hunger. Anyway, what was clearly noted down was that Shriram’s mooting style was quite on point —he spoke with such flourish and panache that the only thing tripping up his delivery appeared to be his consistent mispronunciation of Trachsel’s surname, much to the audience’s silent amusement. However, rumour has it that Darrell Lee (of Law-Med Dota 2 fame) wasn’t particular impressed with him. 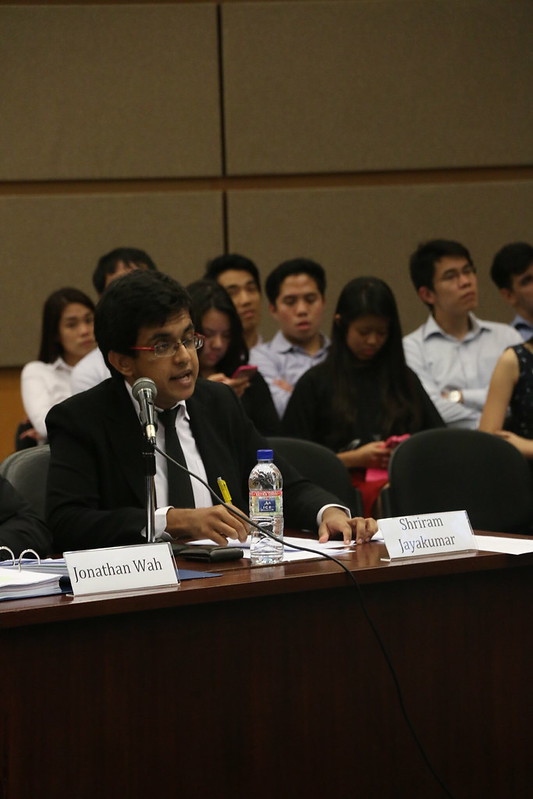 After convening to decide on the results, the judges, as usual, congratulated and praised the mooters as a whole. Justice Ang was impressed by everyone’s understanding of facts but encouraged parties to scrutinise facts in more detail to try and find a turning point in the case. In fact, she shared that in real life, “every case has a turning point” and that one simply had to find it, no matter how difficult or complex the case. Mr Green felt that everyone distilled the issues well and suggested that participants in general should try to feed off the tribunal’s questions, as not all questions are traps and some are meant to help. Mr Chuah pointed out that research could have been more intensive and that participants could have cited a recent Canadian decision. 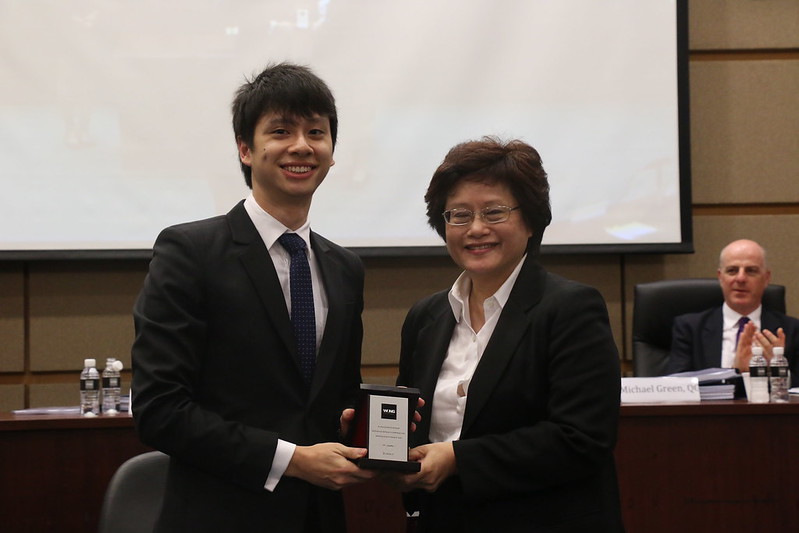 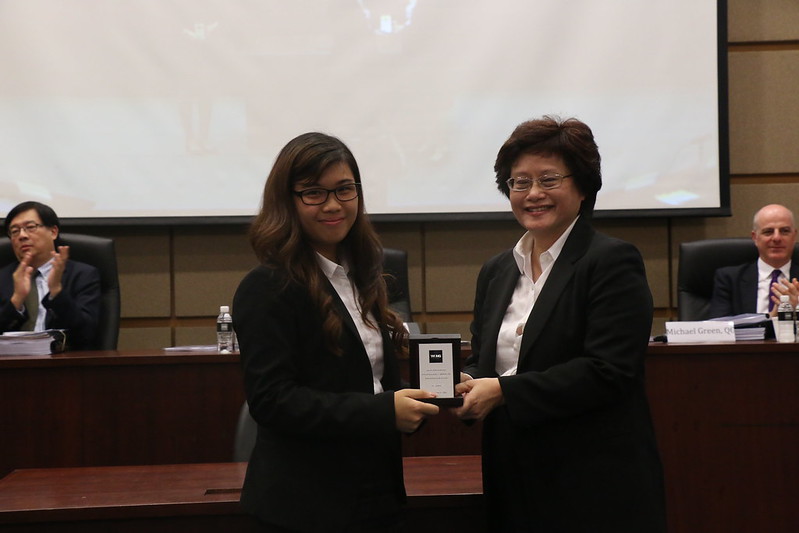 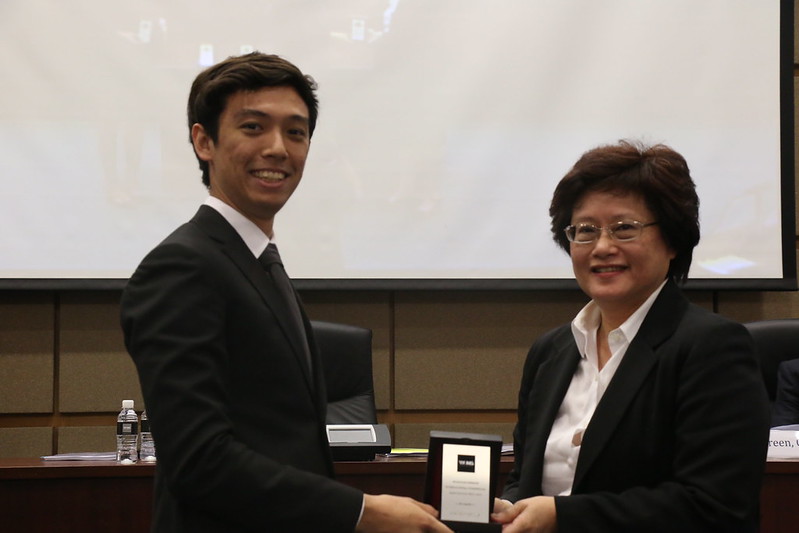 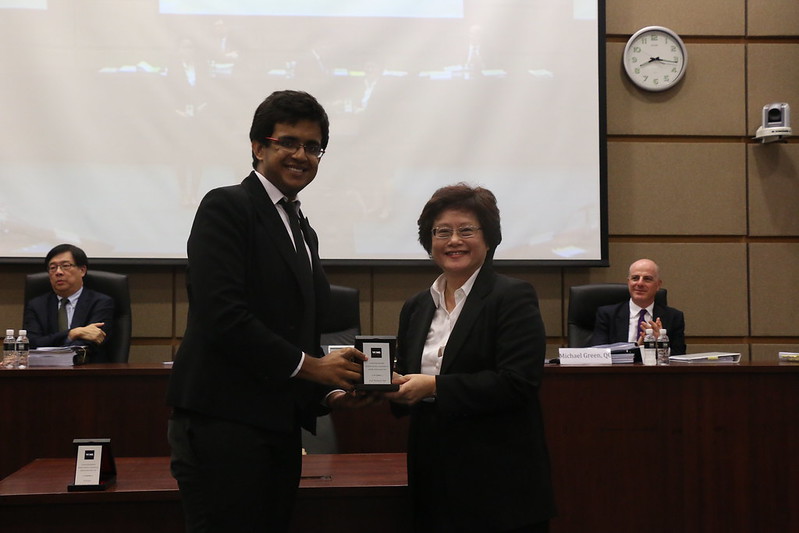 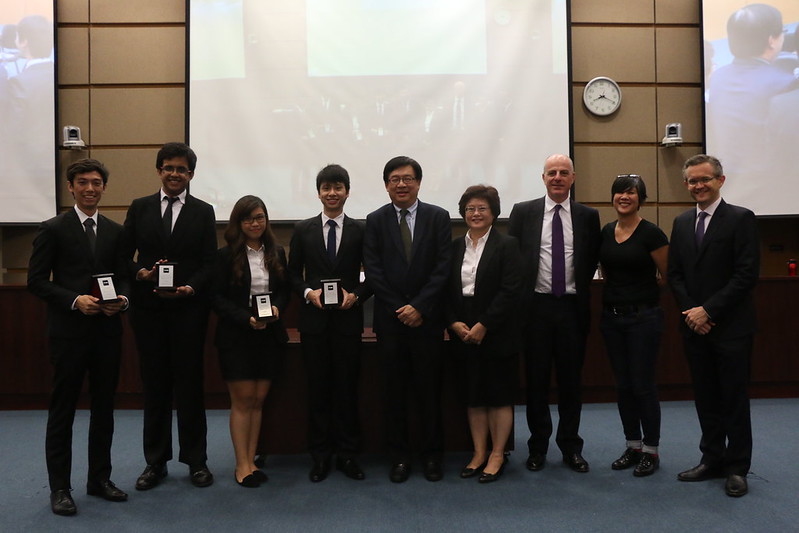 In line with hallowed tradition of moot competitions, the audience (and many non-audience members) complied with age-old customary practice and hastily adjourned for food.

Good job to the Jonathans and hooray for a NUS victory!