The men’s floorball match for LawMed 2015 was held on 17th January. I know nothing about floorball, so I spent most of the match talking to a girl on the courtside, who explained the basics to me.

For this game, there were 5 players per team on court at any time, with 2 huge boards acting as goalies. When they call for a line change (the referee does this by sticking his hand out), 5 other players replace them. The game is split into 3 periods, each lasting about 15 minutes.

Honestly, I did not catch much of the game. It was so fast-paced that mostly, I couldn’t even tell where the ball landed. In my defence, Nicole (the girl who explained the game to me) mistook her boyfriend for another player on a few occasions.

The floorball guys easily evened the score by bagging a point not long after Team Med scored their first goal halfway into the first period. At some point, a ball came flying towards our side of the court. Inevitably, it made contact with one of our player’s head, which apparently was not allowed. However, his attempt to divert the ball away from our goal kept the score steady. 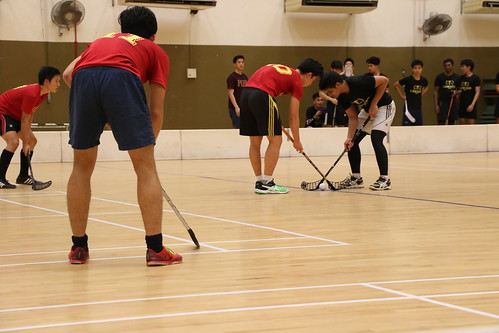 Trying to gain possession of the ball, which we did!

The law team did a tremendous job keeping up with the pace of the game despite only having 12 members on the team. Trust me, it looked really tiring to run around non-stop. With 18 members on their side, Team Med managed to score another goal by the end of the first period. Even so, our players came close to scoring at least twice! Pushing through the defence set up by the med team and their (many) interfering sticks, our players skillfully took a shot from the side of the court. Unfortunately, the ball hit the goalpost, narrowly escaping a score. With the white boards acting as extra huge goalies (come on, no one who plays floorball is THAT huge), it made scoring a goal even more difficult. 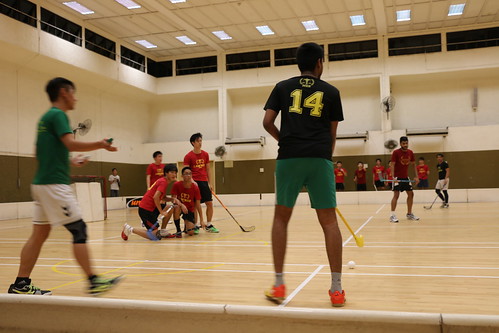 Team Law defending their goal against a penalty shot.

The law team fought hard against Med all through the second period. With the score at 3-1, Team Med tried their best to maintain the score by keeping the ball away from us. However, our floorball players were relentless and managed to regain control of the ball every time. Although they barely had time to take a proper shot with the opposing team hovering around, the law team managed to (almost) score again! Sadly, the ball hit the post and rolled off. Considering the distance and angle at which the shot was taken, coupled with the ball thieves looming about, this was really quite an achievement!

Although time was running out through the third period, our floorball team did not succumb to pressure and gained possession of the ball on many occasions. With about 4 minutes left, a player on the opposing team took a shot that whacked the side of the board with a loud “thwack!”. By a stroke of luck, the ball obediently rolled into the net. We were completely floored. As the game came to a close, the (official) score stood at 4-1. 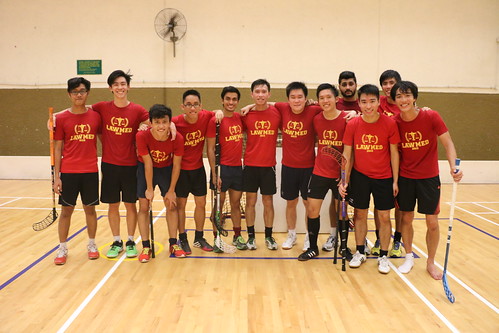 Even though the ball was defiant and the angles were not in our favour, the law team put up a great game in terms of perseverance and teamwork!

Article and photography by: