Noticeably absent from the starting line-up was Captain James (Year 2) and our very own Ryan Giggs, law-faculty veteran footballer Hari (Year 4). Both of them were unable to start due to injury.

Nevertheless, Hari and Captain James led the pre-match pep talk, laying down a tactical plan to press high up the pitch while keeping defensive solidity and shape. Having experienced the Inter-Faculty Games earlier last year, they were well aware of some of the more dangerous Medicine players and knew that our team had to maintain focus to stay ahead. To our credit, we were tactically astute and maintained our discipline throughout the match to secure a hard-fought 1-0 victory. 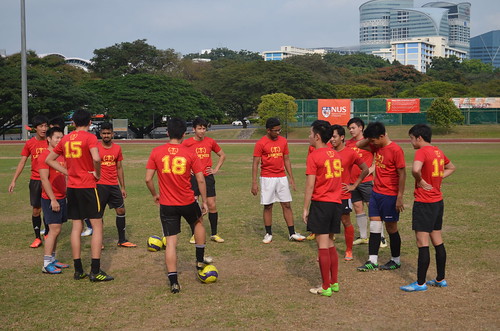 Warming up before the big game!

After some early jitters and some choppy play, we got into our stride and strung together some good passes, and began to dominate possession. Medicine was left chasing after loose balls in the hope of some odd half-chance. Against the run of play, Medicine dangerman Jerome threaded a penetrating through-pass in between our 2 centre-halves Suwe (Year 1) and Julian (Year 4), to give our team its first real scare.

Law eventually took hold of the game in the first half with its smooth passing and swift counter attacks. Our efforts were eventually rewarded when striker Ian (Year 2) picked up a loose ball at the edge of the halfway line, and found some space for himself. He curled a pint-point pass across the Medicine back four to find Darren Low (Year 1), who must have run at least ¾ of the length of the pitch to meet the pass.  With the calm confidence of a seasoned professional, he slotted the ball in to the back of the net for a well-deserved 1-0 lead. The defenders watched helplessly as the ball rolled in. 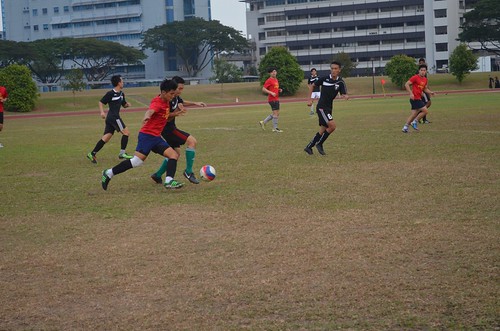 Left-winger Darren Low turned up with a masterful performance. His deft control and marauding runs into the box left the Medicine boys in disarray.

The only sniff of a goal from the Medicine team in the first-half was a half volley that was tipped away by Goalkeeper Andrew (Year 3). Andrew was a commanding figure throughout the game, as his height served a significant advantage in set-pieces and corner-kicks.

Early jitters aside, the backline was extremely solid. Daniel (Year 2) played like Jamie Carragher in his hey-day at Liverpool, snuffing out loose balls and swiftly clearing away balls to launch quick counter-attacks. He was like a man possessed, aggressive in his challenges and commanding in his leadership of the backline. Some amongst our team would like to think that Valentine’s Day had something to do with it.

It was truly a man-of-the-match performance. 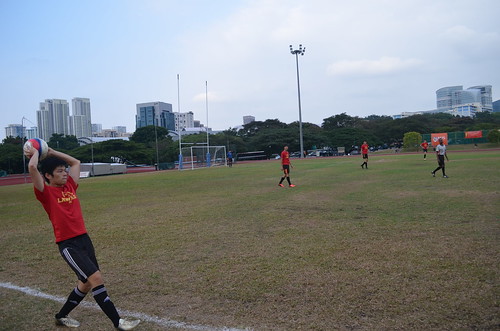 What a player! Man-of-the-match Daniel (Year 2).

In the dying minutes of the first-half, star midfielder Darren suffered an awkward landing on his left knee, aggravating a prior ACL injury. Notwithstanding the pain, he soldiered on for a while before being put out of his agony with a substitution by Lavan (Year 2). 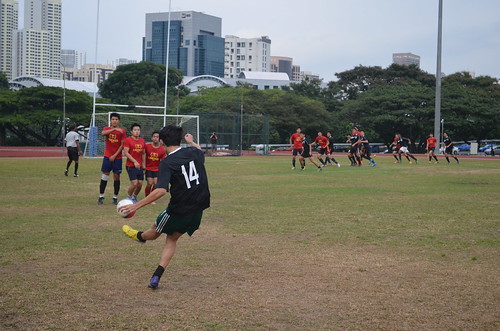 Number 14 curling in an in-swinging free-kick. It was cleared away with ease (obviously). 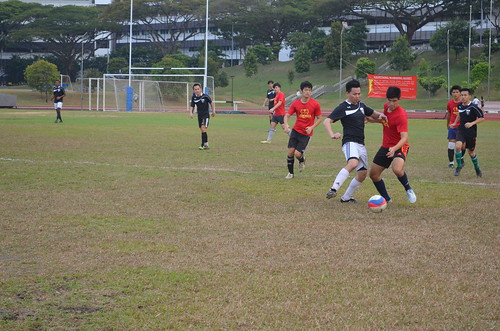 The referee blew the half-time whistle and the boys in red headed down to the stands for an exercise in tactical master-class by Hari, who must have surely been burdened with the heavy emotions of being involved in his final Law-Med football match.

Buoyed by the success of the first half, the team made its way to the pitch again. Chances were few and far between, but the passing movement and overall tactical discipline was apparent for all to see in the second-half. Jayden (Year 2) led the forward line, holding up the ball and creating space for the wingers to make their runs. On one occasion, he chased down the ball all the way back to our defensive half, Ã  la Wayne Rooney.

Medicine had nothing to offer in terms of attack and were once again relegated to chasing loose balls and even resorted to some scrappy and ill-timed tackles. Darren returned to star for our team in the second half, only to be chopped down (cruelly) by a Roy Keane-esque tackle deep in our own half. The referee rightly brandished a yellow card for the poor challenge. 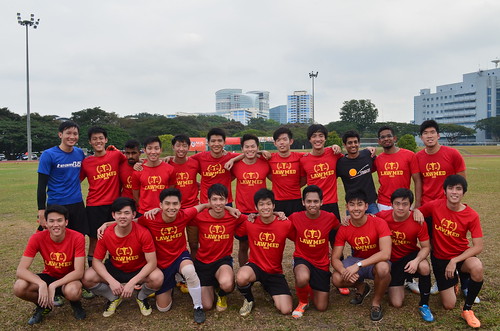 As the second-half drew to a close, a famous victory against Medicine-football looked increasingly certain. The referee blew the whistle to indicate the end, as our footballers shook hands with our fellow NUS friends for a game well played. As in Law-Med games 2014, the Law team came out top to celebrate a well deserved victory.

The team would like to wish all the other teams competing in Law-Med games all the best!