As the semester wears on, schedules get busier, and a general sense of weariness permeates the air. For the players from both Med and Law, it was a breath of fresh air to be able to spend some time away from their books. The Medicine team dominated the Inter-Faculty Games this year, beating Engineering in the finals with a resounding score of 8-2. Unsurprisingly, our strategy was to conquer and destroy. 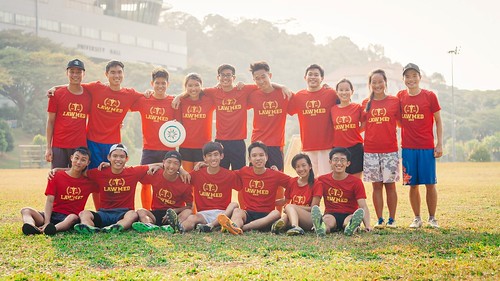 The team is literally glowing.

For the uninitiated, this is how ultimate frisbee works: http://tronic.tumblr.com/post/9317312600/how-to-play-ultimate-frisbee-the-complete-set

The game started brightly for the Law side, which was severely shorthanded due to the absence of some key players. However, we got off to a bright start after an extended period of scrappy play. Christie Long (Y2) scored in the end zone to take the lead. “Ah Long”, as she is more commonly known, staked her territory fiercely, and her dominance in the endzone was reminiscent of a real-life loanshark.

Visibly rattled, the Medicine team was quick to rally, and unfortunately scored three points in quick succession. However, the Law team was determined not to fall behind, and a great play resulted in Ng Yuhui (Y2) shaking off his defender to score. Yuhui, the “Prince of Angsana”, showed that his diligence in his academic endeavors similarly extends to his sporting pursuits.

Jasmine Chang (Y4) of Med scored the next point to make it 4-2, but a brilliant long throw (more commonly known as a huck) from our Wong Ee Ming (Y3) secured the next point. Reminiscent of Paul Scholes in this prime, “Eems” as he is affectionately known may not have the trademark ginger hair, but his vision and intelligent play were visible for all to see. His efforts were especially impressive when you consider the copious amounts of beer he drank while on exchange to Germany. 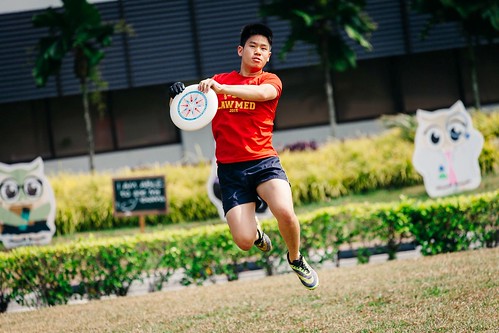 On the receiving end of Eems’ throw was Lee De Hong (Y2), law school’s resident cutie pie. With his trademark smile, he outran two Medicine defenders to grab the point. Considering that he had played only sporadically for several months, his excellent form casts serious doubt upon the maxim that all men are created equal. It must be the jeanz genes. 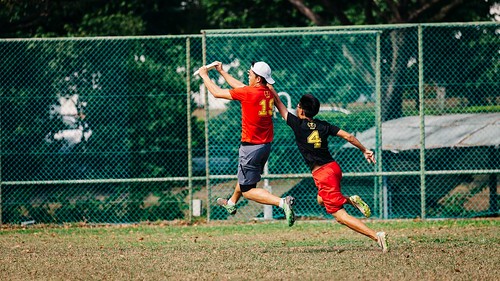 Just De Hong being himself.

Orchestrating things at the back was Natalie Lim (Y1), fresh from her exploits at the 2014 World Ultimate Club Championships, where she represented the Singapore women’s team. Her excellent game sense is only rivaled by her equally wonderful fashion sense. Your typical law school overachiever, she somehow manages to find time to be part of the IVP team, the Mooting and Debating Club, and LSIRC. This writer stands in awe of such effective time management. 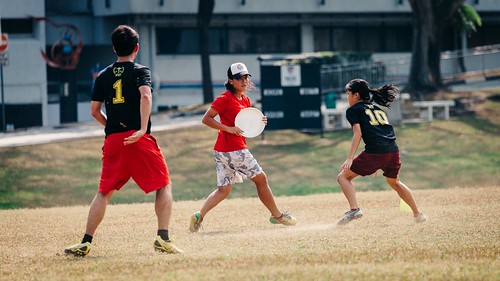 Despite our best efforts, Med scored again to make it 5-3, but a characteristically excellent point was scored by Zhang Zhefei (Y3) to reduce the gap. There is little that can describe how talented Zhefei is. A former NUS captain, among other achievements, Zhefei’s presence had several Med players offering to collectively sit out the game if he didn’t play. Thankfully, he did not take up the offer, and made his presence of the field felt all day long. 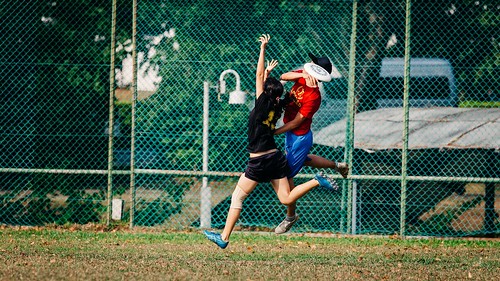 It was at this point that things took a turn for the worse. For Med, Javis Janwar (Y1), Wern Ho (Y1) and Reyor Ko (Y3) arrived to bolster Med’s squad. In comparison, the Law team was starting to look ragged, having a threadbare squad and little to no fitness (no doubt attributable to marathon sessions in the library). Med scored several points in quick succession, and it was frankly a relief when half-time was reached.

Veteran players Nicholas Tong (Y4) and Rachel Soh (Y4) were instrumental in mitigating the Med resurgence. Oscar Wilde famously highlighted that “with age comes wisdom”, and the wily play of both Nick and Rachel ably illustrated his words. Given that this was their last chance to represent NUS Law, the two seniors played their hearts out, proving the truth of the maxim “old is gold”. This writer is confident that like Frank Lampard and Manchester City, they will continue to excel after retirement to the Law Society. 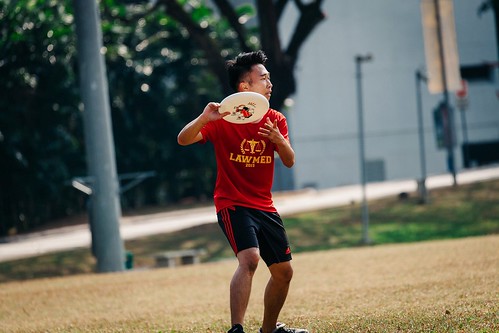 Several parts of the game have started to fade from memory, including the one of Med winning. The rest of this article will only cover the parts that remain in this writer’s ailing mind. A truly magnificent defensive play from Zhefei, for example, where he caught up with a Med player miles away from him, and beat him in the air. This is especially impressive given that said player was a full head taller than Zhefei. Groans from the Med crowd, fanatic cheering from Law.

Every sport has its idols, and ultimate frisbee is no exception. Chua Yong Quan (Y3) is fondly known throughout law school as the AC Superstar, and he lived up to his reputation, working tirelessly alongside Timothy Oen (Y1). In the dying moments of the game, Tim even summoned strength in his legs to make a lung-bursting sprint to catch a huck, before casually tossing it to Ng Shu Chin (Y3) for the point. 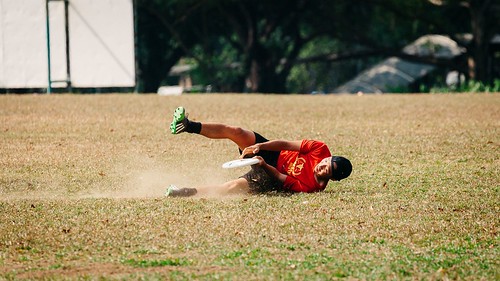 Tim (Y1) looks like an overturned turtle here, but his run was truly amazing. 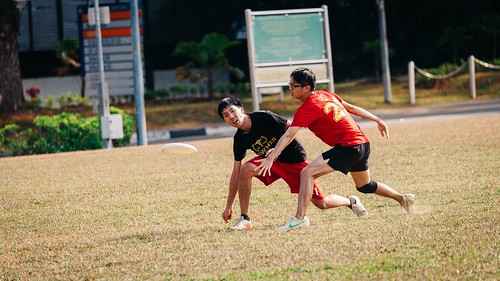 Consider also a magnificent point scored by Joel Stud Tieh (Y2). (If you were wondering, yes that is his actual middle name). Joel’s fan club could be heard giving an adoring sigh from the sidelines, as they imagined themselves in the position of the disc he had just embraced. 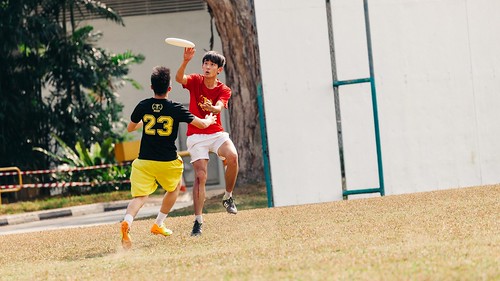 If you could bottle his charm, you’d be a billionaire. 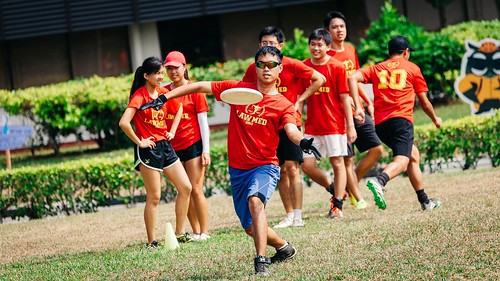 Leung Liwen (Y2), in front of the camera for once.

The game ended 17-7 in favour of Med, with the Law team unable to cope with the overwhelming amount of talent. In the spirit of the Law-Med Games, any on-field tensions evaporated, to be replaced with friendship and camaraderie. 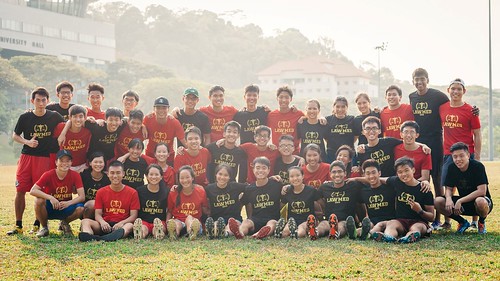