We told ourselves that we would come back stronger for Law-Med. And (surprisingly) we did.

Intense training for LawMed Floorball started every Friday several weeks before the match. If I had to sum up the whole game in one sentence, it would be that the game was too intense for me to handle. It was the kind of excitement knotted with fear in your heart that spreads across your whole body, and tingles even your toes. Even before the match had started, tension filled the air. Team Law carefully observed what the Medicine Team was doing for their warm up, in order to infer their potential strategy while anticipating the intensity for the next three fifteen-minutes matches. (If you notice the copious use of ‘intense’ in this paragraph — yes, indeed, the match was very — intense.)

The seniors aka the pros in the team advocated for a strongly defensive game – to try our best to prevent Medicine from scoring. In the words of Maria (vice-captain, year 2) “if we can hold 0-0 for the whole game, it is a win for us already.” But the game turned out otherwise. 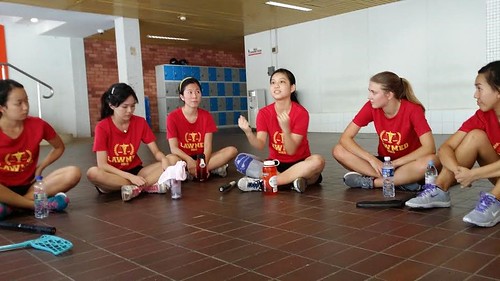 One minute into the first game and Medicine nearly scored. The attack by Team Medicine was countered by Team Law’s defence while we tried to exploit their loophole. The defence strategy seemed to work fine and managed to prevent Medicine from scoring any goal at the end of the first fifteen minutes. This was despite the numerous near-goals from Medicine, which were countered by pure skills of Team Law especially the ‘last man’ before the goalpost, and strokes of pure luck. We sighed in relief at the end of the first match, and boy were we hopeful.

Both teams appeared to be fuelled by the score of 0-0 from the first match. A mere 20 seconds into the second match, and Team Medicine nearly scored again. Each time they nearly scored, it incited screams of “nooo” and other random words of encouragement from the rest of Team Law who were on the bench. The exchange of balls across the court was accompanied by both teams’ best attempts to score.

The highlight of the second match was the first goal. Medicine sent a ball flying towards the goalpost, and Maria while blocking the ball heroically, inevitably had her hands in contact with the ball. Unfortunately, this resulted in a penalty shot for Team Medicine; an open goal with no defenders. In other words, it was a sure goal for Medicine, a goal that even the writer did not dare to watch. It went in and the score was 1-0 by the end of the second match.

The short break between matches gave time for a change in strategy, as strategised by Jean (Captain, year 2) and the rest of the experienced players. It was a do or die situation and so the strategy was to play more offensively than before. Medicine was on fire too, and this time, they nearly scored (again) five seconds into the third and last match. 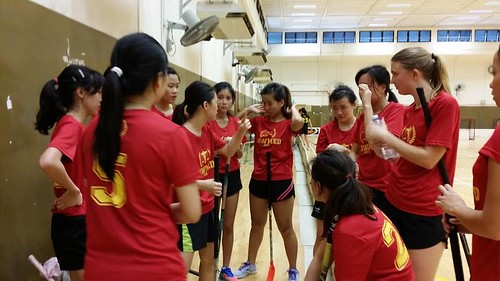 Still strategising, head into the game and no time to be glam

Suddenly, with a loophole available, Xue Kun (year 3) shot a ball into the goalpost from somewhere near the centre line. Cheers and shrieks exploded from the Team Law bench as the rest of us were ecstatic, now that the score was equalised. There was a chance indeed. The team high-fived Xue Kun hysterically like how a soccer player would get jumped on by others after scoring a goal.

Sadly, our happiness was extremely short-lived as Team Medicine swiftly scored their second goal. Soon after, they swept their third goal from a position extremely near to the goal post. While they scored their numerous goals, Team Law did not give up and continued the blazing spirit in a bid to catch up as much as we could. Throughout all the matches, both sides fought on head strong and there were several times when players crashed and destroyed the boards at the side.

The pressure of time running out brought out the best of both teams. Medicine, again, scored as they pushed a goal through from near the centre line. Even Xue Kun commented that “it was a really nice score”. It seemed as though at 4-1, our fate was sealed but that did not stop the Law team from being aggressive. Efforts were paid off, as Delise (Year 4) managed to score the second goal for Law. The rest of us were so elated that we cheered as though we have won the match. But alas, Medicine still managed to widen the gap as they deftly scored their last goal, with the match ending 5-2 Medicine to Law.

All our girls put in commendable effort for an extremely well-played (and intense) game that showed the abundance of Team Law’s potential, perhaps we can strive to come back better (again), and we just might next year. 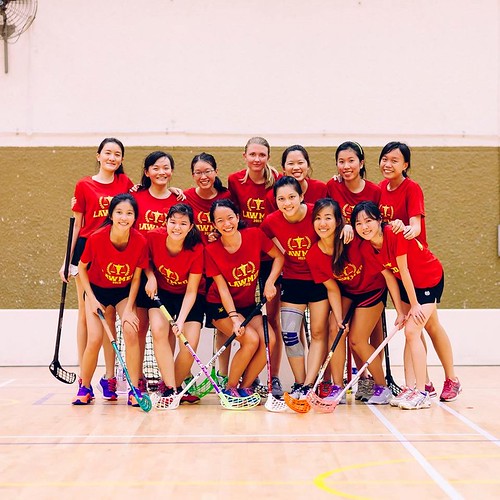 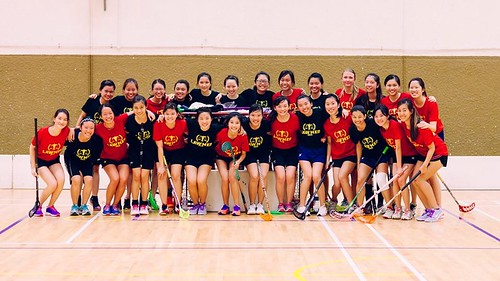