They say all good things must come to an end. It is on this note that the much awaited debate on Friday drew a proper closure to the LawMed Games. Both teams convened in the Auditorium, ready to spill blood. Perhaps to reflect current concerns, the motion this year struck close to home. The questioned posed was “This house believes that it is doctors, rather than lawyers, who are obsolete.” Law supported the motion while Team Med opposed. 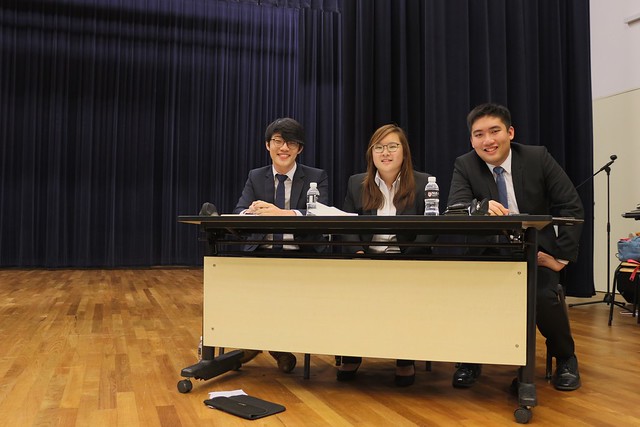 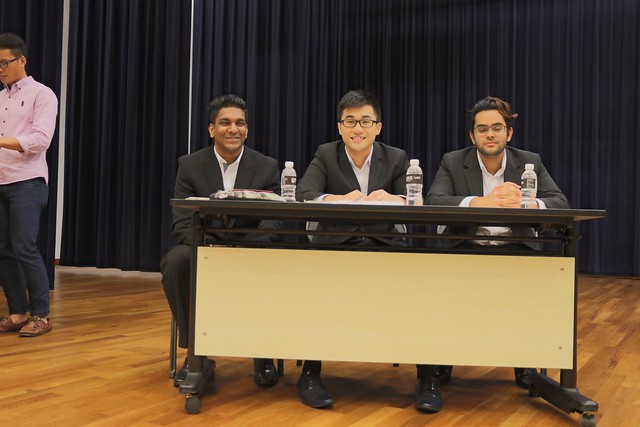 Proclaiming that doctors are no more useful than the MC that they give out so freely, Team Law’s first speaker, Mark, kicked off the motion with a powerful performance. He commenced his attack on two fronts. Firstly, doctors are expected to be the bastions of moral righteousness but yet in reality, they do not uphold themselves to that standard. He cited Nazi medical experimentations and countless research malingering as proof that doctors do not in fact do the job they should. On the second point, he boldly asserted that doctors are now being replaced by machines and online solutions like WebMD. For the sake of balance, Mark went along with the less controversial proposition that Bumsoo’s grandmother does an equally good job and can reasonably replace doctors. In a show of support, Bumsoo would later personally attest to the effectiveness of his grandmother’s ginseng remedy. Mark’s enthusiasm, confidence and overall gift of the gab left some pretty big shoes to fill for the next speaker. 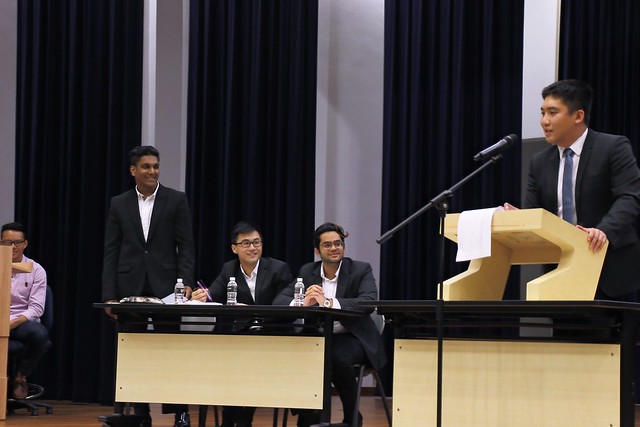 Team Med’s first speaker, Abhishek, adopted an approach that was in stark contrast to the fiery and passionate approach set by his precedent. Cool and collected, he maintained that doctors are still relevant in today’s world. Responding to Mark’s allegations, he took the position that medical developments are made possible through experimentation and that good has come out of it. He also clarified that one still requires a trained professional to identify the drugs and determine their prescription. Neither WebMD nor Bumsoo’s grandmother can ever be an appropriate alternative to these skills that doctors possess. 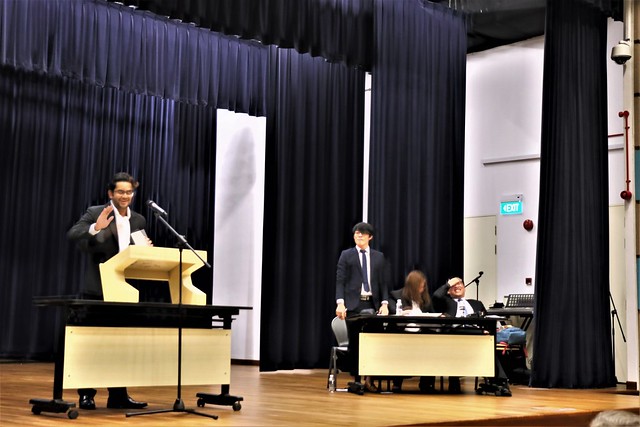 Unimpressed by Team Med’s submission, Joelle decided that it was time to roll up her sleeves and show them how it’s done. Joelle incisively illustrated the embarrassingly dismal track record doctors racked in questionable experimentations and tempered researches. In contrast, she championed the moral superiority of machines. She artfully tied it back to her point that lawyers are required to interpret the laws that govern these automatons once it is legislated. Proceeding to demolish the rosy picture of the medical profession, she submitted that preservation of life can only guarantee an agonising existence, not to mention the additional financial and emotional cost on the household. On the contrary, lawyers secure the things that truly matters; a job and a well-supported family. To add insult to injury, Joelle sharply observed that unlike the law profession, the role of a doctor seemed to be experiencing a gradual takeover by other professionals like nurses, pharmacists and therapists. 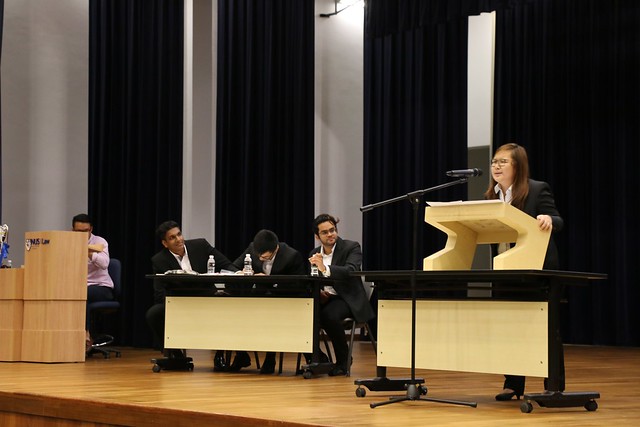 Joelle unreservedly expressing her scepticism about Medicine’s stand. “We are the solution to starvation!”

Team Med then went into full A&E mode. Fortunately, recovering was not something they were unfamiliar with. But as all veteran doctors will admit, recovery is often slow and uncertain. Vignes decided that the best way to counter was to not rebut at all. Instead, he settled to continue extolling the relevancy of doctors. Firstly, he reinforced the notion that doctors have the requisite medical diagnosis and reasoning capability that a machine lacks.  Second, he contended that more significance should be given to the “human touch” doctors provide. Smelling blood in the water, Mark cheekily pounced on Vignes’s flawed reasoning with his “Mother tongue is still obsolete” analogy, invoking strong reaction from the crowd. Vignes, fresh from his close encounter with Mark, skilfully countered that unlike a machine, doctors understands the patient’s socio-economic background and can formulate prescriptions that are properly customised. 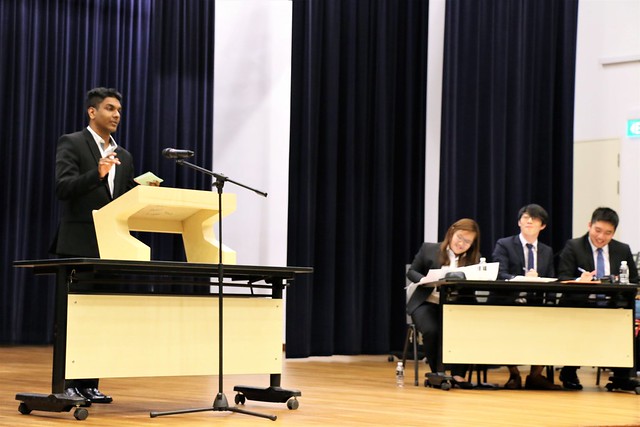 It was evident that the house was all waiting for this moment. Even before Bumsoo could deliver the finishing blow, the audience were already in pandemonium. With a fine touch of literature and a generous amount of flamboyance, he wove his arguments into a beautiful tapestry of logic, wit and charm. He carefully and methodically dissected Vignes’s counter-arguments, leaving no stones unturned. Bumsoo brought to light the fact that misdiagnosis are actually quite common when the human element factors in. On the issue of “human touch”, Bumsoo wittily elaborated upon it by highlighting the cold dismissive tone that Team Med gave to Team Law. He submitted that lawyers provide a higher degree of human touch through ADR like mediation or negotiation. He then chided doctors for their inability to provide committed answers. They often allow such a large margin of error that it leaves one questioning if it would ever amount to anything useful. 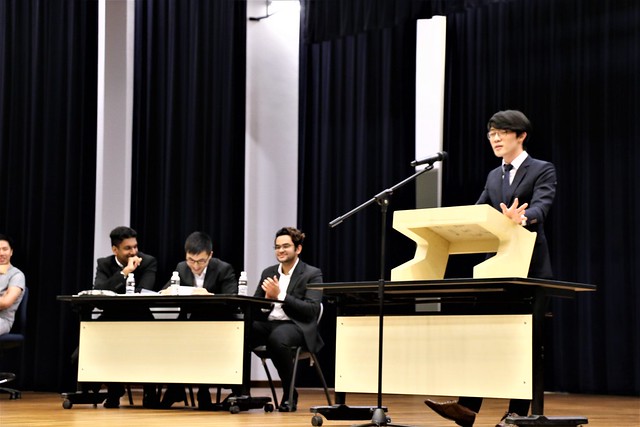 Bumsoo with “100% confidence and zero evidence”.

Perhaps convinced by Bumsoo’s spectacular show, Team Med’s last speaker relented that doctors and lawyers may not be obsolete after all. However, he was still focused on his cause as he went on to expose Team Law’s biased researching strategy. He qualified that of these black sheep named by Team Law, many more others went on to save countless lives. He also clarified that surgical robots are there to merely provide finer mechanical precision. Decision making and adapting to each patient’s unique anatomy still lie largely in the domain of doctors. In closing, he referred to the ageing population as proof of the continuing need for doctors whereas the widely reported glut of lawyers support a contrary view for our profession. 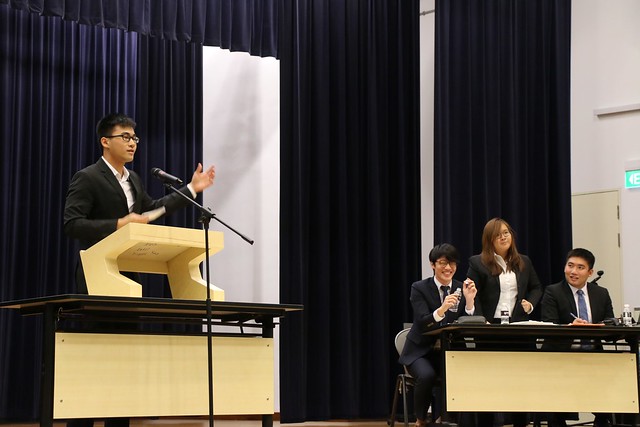 Team Law ended the motion with Mark blasting Team Med for their arrogance and dismissiveness. He reminded them that this is something that robots tend to avoid. He observed that with the many unethical medical practices, lawyers are more necessary than ever to control and regulate them. Subtle shades were thrown for good fun. No lives nor money were lost. The debate ended on a good note. 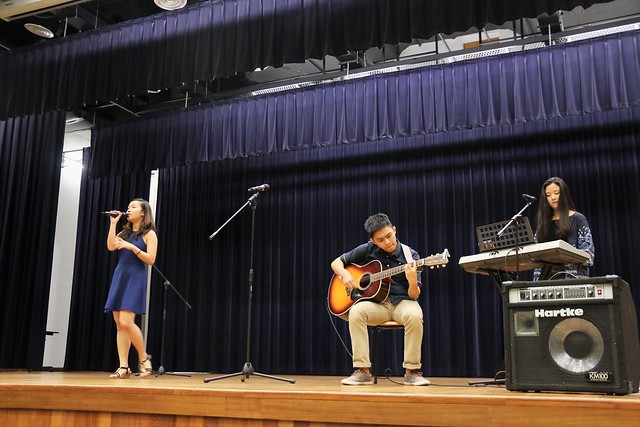 Performance by our very own Law students, Christine, Bo Geng and Joyce.

Professor Simon Chesterman took on the role of delivering the judgement on behalf of the judges. He ventured into a bit of a story-telling and reminded the House that as much fun as both sides had in throwing low blows at each other, each profession should be duly respected. More importantly, he rewarded the House with insightful tips into the pathos, ethos and logos essential to being a good speaker.

Overall, Team Med won the debate but our beloved Dean remarked that Law in turn won the heart of the audience. Team Law graciously congratulated Team Med and reminded them to honour their side of the deal to bring healthcare services to our very much neglected Bukit Timah Campus. In all our hearts, Team Law definitely won on aesthetics and style. Interestingly, this seemed to be their main agenda right from the start. Unsurprisingly, the best speaker of the House went to Bumsoo. His grandmother would certainly be proud and perhaps even delighted to find that she had a part to play in this. It turned out to be a very entertaining and engaging debate by both sides of the House and with this, the Law-Med Games came to a fitting end. Congrats Team Med and thank you to all our speakers!