With the dreaded Y1 LARC moots coming up in less than a month, I thought it would be a pretty good idea to watch the WongP International Commercial Arbitration Moot 2017 Finals, in order to get a rough idea of what I’ll be getting myself into. And I get to write an article, which is a refreshing change from all the mundane lectures and tutorials. Killing two birds with one stone, I thought.

The towering and friendly Yash was kind enough to educate this clueless soul on what the moot problem was about before heading in; very simply put, it was an arbitration dispute between two companies, on a contentious restraint of trade (RoT) clause and liquidated damages (LD) clause in a breached contract.

The Claimant was represented by:

Melody Lau (Y2, NUS), who argued that the RoT clause was reasonable.

Aaron Yoong (SMU), who argued that the LD clause was not a penalty clause.

On the other side, the Respondent was represented by:

Joshua Phang (Y2, NUS), who argued that the RoT clause was unreasonable.

Huang Qianwei (aka Violet Huang) (Y1, NUS), who argued that the LD clause was a penalty clause.

As the audience settled down in the moot court, the emcee Yin-Ing officially opened the moot finals and invited the judge for the semi-finals, Mr Andre Maniam, on stage to introduce the panel: 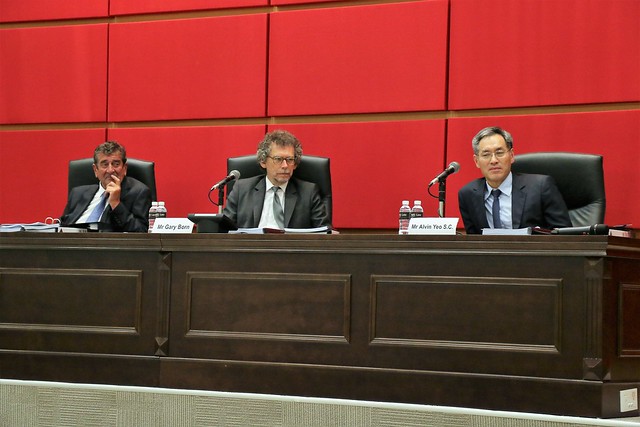 Mr Maniam introduced all three esteemed members of the panel with a dash of banter, and concluded with a friendly yet ominous warning to the finalists — the panel may be made up of “really nice guys”, but they sure will not be during the moot itself, and on that note, he left the finalists in their good hands. 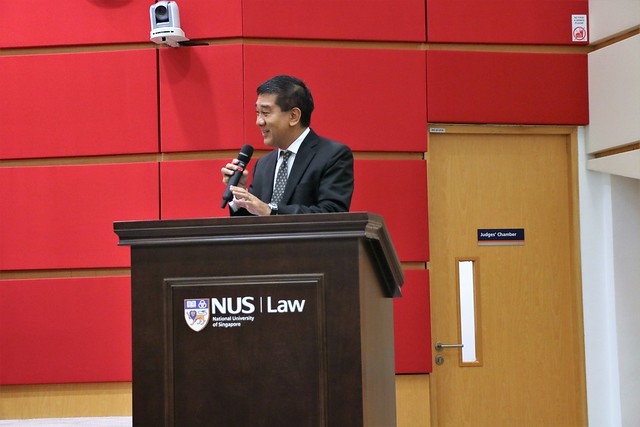 Melody and Joshua started the ball rolling with their submissions on the RoT clause. Melody’s submissions included arguments on the cascading covenant, goodwill and proprietary interest, all of which were met with small challenges from the panel, but were substantiated without much problem. Mr Yeo then expressed a great concern over Melody’s public interest argument, and critically evaluated her take on the contract’s confidentiality clause. Nevertheless, Melody held her ground and managed to rebut Mr Yeo’s tough questions skilfully. He was evidently satisfied with her answers, and leant back with an approving smile.

Following Melody, Joshua’s contentions covered on the lack of legitimate interest, the overly wide scope of restraint, and how it was inaccurate for the claimant to conclude that the RoT clause was reasonable by merely using one factor instead of multiple factors. Mr Lee was worried on what the claimant will be left with should the court strike out the cascading covenant, but Joshua was quick to point out that the claimant could sue under another clause and obtain damages as alternate relief. Mr Born and Mr Yeo were then extremely interested on why Joshua would say that the RoT was unreasonable, and the both of them once again argued intensely upon on the facts. The arbitrators were clearly impressed with Joshua’s answers that were squarely substantiated with his case law, and did not have much to add on afterwards. 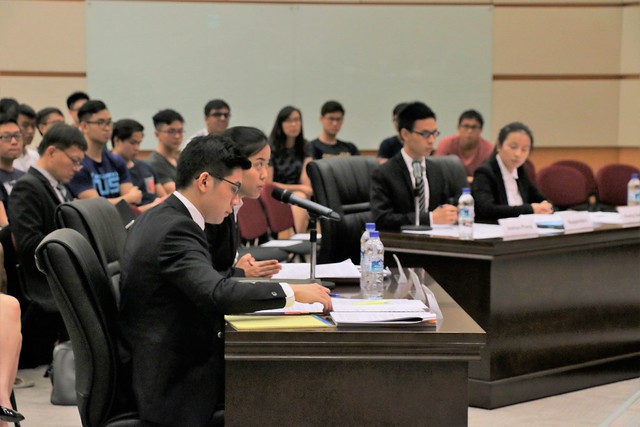 Representing the Claimants: Aaron and Melody.

Moving on to the LD clause, Aaron gave the audience a little laugh by briefly explaining how the LD clause was drafted — apparently the 9 million dollars payable under the LD clause was decided by “looking at the clock” and the superstition that 9 is an auspicious number. Notwithstanding the rather amusing way that the LD clause was drafted, Aaron calmly explained that it was still reasonable as a genuine pre-estimate of loss because they were hard to assess. Although Mr Yeo challenged how it would be difficult to estimate losses, given that both parties were businessmen, Aaron then countered it with a lengthy explanation on equal bargaining power, which evidently gave Mr Yeo the answer he needed. Aaron then ended off by proposing how the presence of confidential information meant that damages could be accrued over many years, which further justifies why a sum of 9 million would be reasonable in the long run.

Violet then rebutted Aaron’s submissions at the speed of a machine gun, stating that the LD clause was a penalty clause mainly because it was not a genuine pre-estimate of loss, it had a lack of legitimate interest, and that the sum of 9 million dollars was decided arbitrarily without any justifiable basis. She probably had the hardest time in getting her points across, as the arbitrators were not too convinced with her initial arguments. Mr Born and Mr Yeo constantly grilled her on whether the sum of 9 million dollars was really all that unreasonable, with sharp questions such as “Well the business was valued at 30.5 million… is 9 million really that unreasonable, being one-third of the valuation?” and “The parties could have negotiated for 90 million or even 900 million… why would 9 million be that unreasonable?”. In spite of overwhelming doubt, Violet still steeled herself and continued to speedily rattle on why the LD clause was extravagant and hence unreasonable. In what I felt was the mic drop of the night, she acknowledged Aaron’s argument on how damages could be accrued over time, but then questioned why would the LD clause then only provide for such a short period of one year — which in turn implied that it was still not a genuine pre-estimate of loss, because it did not consider the long run, and hence was still a penalty clause. It was a very strong conclusion indeed, and some of my batchmates in the audience were clearly awed by how she managed to pull it off. 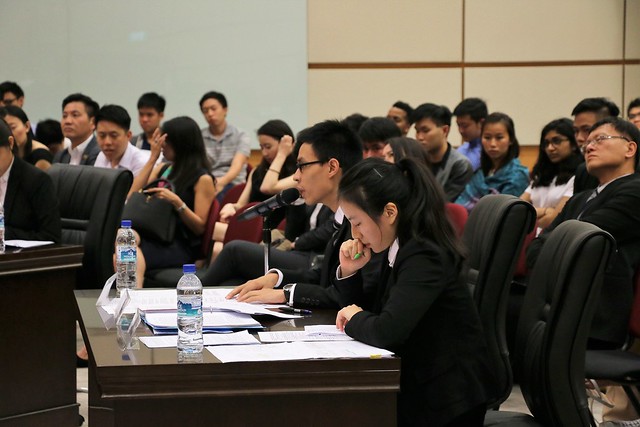 Representing the Respondents: Joshua and Violet.

The arbitrators then left shortly and came back with their verdict: all four finalists were cool and good, performing well even under pressure. Mr Yeo admitted that he intentionally gave the Respondent’s side a harder time as the Claimant’s case was much more difficult to argue for, but generally, the panel was in unanimous agreement that every finalist answered their questions directly, tried not to refer to their materials when rebutting arguments, and maintained good eye contact — all plus points in their books. However, the panel still had to make a decision, and hence, without further ado:

Although the other three finalists were really outstanding, in my humble opinion, what I think made Joshua stand out was that he knew and applied his case law particularly well. Although he recycled some of his cases, it was clear that he knew them like the back of his hand, and was particularly proficient in milking out every last passage and paragraph he could in order to meticulously substantiate his arguments and to adequately answer whatever the arbitrators threw at him.

The night ended off with a sumptuous buffet at Oei Tiong Ham building. Once again, congratulations to all the finalists! It was a truly amazing experience watching them; a night well spent indeed! 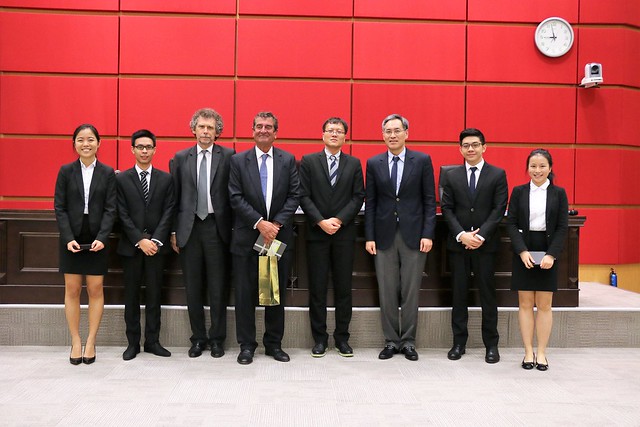