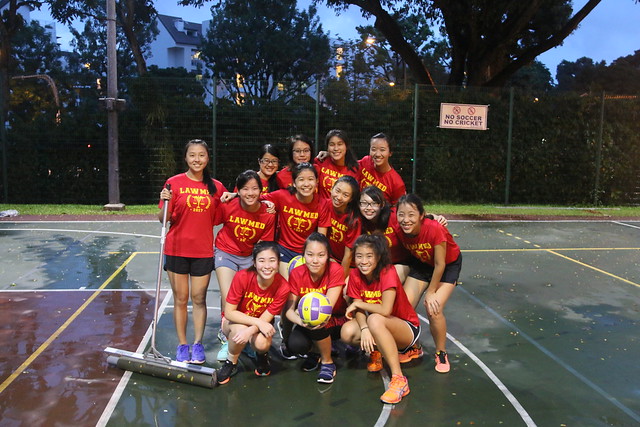 The strong team of 18 girls, after months of consistent training sessions each week with blood, sweat and tears were raring to go on the scheduled date for LawMed (24th of February) but were thwarted by heavy rain throughout the day. Having run afoul of the Weather gods and with no indoor court available, the game was regrettably postponed.

After much negotiations with the Medicine team, the two teams finally settled on another date (28th February at 7pm).

Having reached UTown on the 28th, I decided to get some food while I waited for 7pm to roll by. However, as soon as I placed an order for food, it started raining. As I looked out at the lush green fields of UTown being pounded by torrential rain, a lone tear ran down my face. Why was nature conspiring against us? What sick game was this? Why were the Heavens taunting us so? I fervently prayed for the sky to clear up before 6pm as I waited for a message on the status of the game.

Finally, the skies seemed to clear up at 5.30pm, but was it to be? I departed to the Eusoff Hall outdoor court, with much anxiety for the fate of the game.

I arrived at the same time as the team (who unfortunately had their numbers greatly reduced from their hopeful 18 to 12) and waited as they sorted out administrative matters such as getting their jerseys and clipping their nails (I am not kidding. The referee actually checks the players’ nails to make sure they are cut short… What a civilised and ladylike game!). As they were doing this, I took a look at the court. It was almost completely covered by water. Sugar Honey Ice Tea indeed.

The team then started on the arduous process of drying the floor. The rollers (to roll off the water) were ineffective — one being curved and the other full of holes. Nevertheless, Team Law resolutely set about trying to clear the large puddles of water. They even resorted to covering the floor in newspapers. At the end, the court looked more like a work of art — a collage of some kind — than anything else. 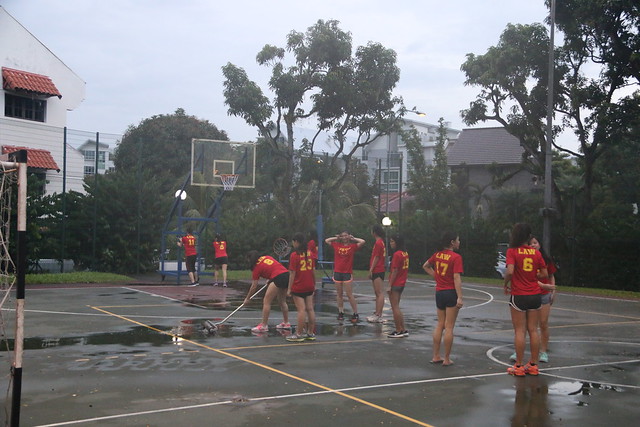 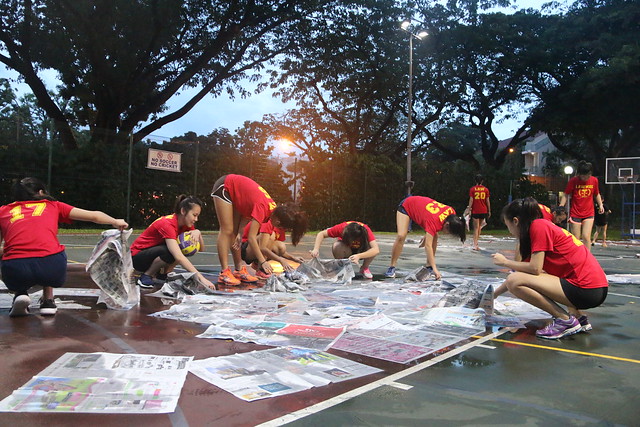 After having done all they could, and with the clock nearing 8pm (when the game was meant to start at 7pm… Oh Lord), the girls had no choice but to begin the game, and warned each other to “play carefully”.

It was, admittedly, my first time seeing a game of netball being played and I had no idea what was going on. I was amazed at the hoop that they used — no backboard — how do they do it folks? The way the ball was shot was unique too. The elegance with which a shot is made — the shooters stepping forward, one leg in the air, a gentle bounce and a flick of the wrist and the air heavy with anticipation. What a feeling!

Just as the medicine team turned up, I heard the rumble of thunder and the sky flashed bright with lightning. Feeling rather like Loki at that moment, I reflected that I too, was not fond of either thunder or what came after it.

However, my fears were unfounded as there was no rain and the game commenced. 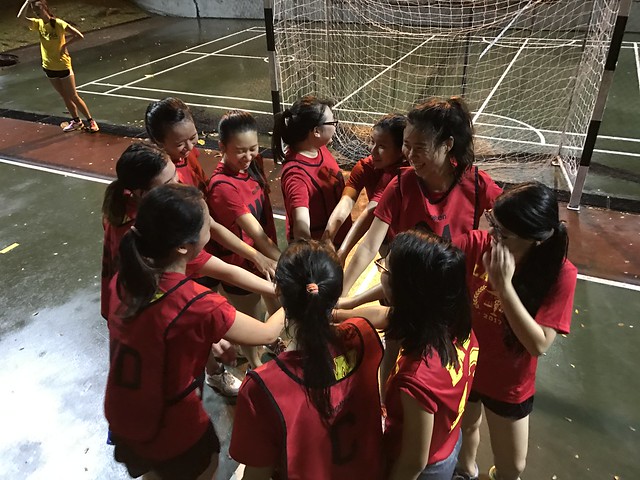 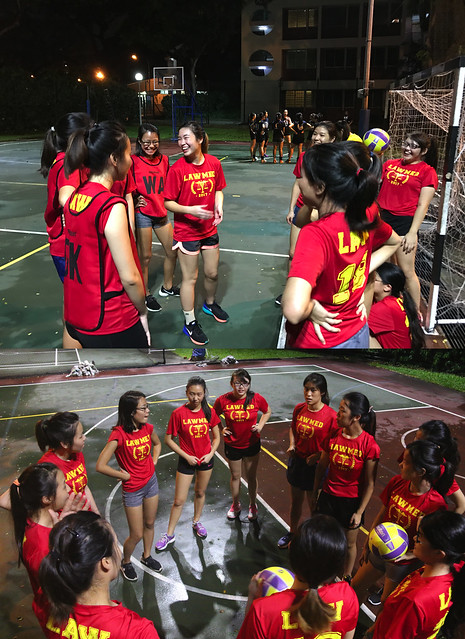 Once the game began, I was shocked at the speed at which the game was played. The ball passed from one end of the court to the other in a matter of seconds, and the ball often switched hands in the blink of an eye. Turnovers were often, fouls were called, shots were made, the girls were sprinting with all they had. The Medicine team played with surgical precision and there was no wasted pass or movement, while our underdogs pressed on even in the face of such formidable opponents. The first quarter ended in a blur and I was wondering whether the team could keep up with the Medicine girls with the score being 9-3.

The second quarter started off better, with our girls supporting each other with calls of “good try!” and screaming with exhilaration whenever a successful shot or interception of the ball was made. There was also shouts of “Hands up!” “To the left!” from the sidelines to those on the court. Things seemed to be getting better, as the team began getting into the groove of the game and finding a steady rhythm, but alas, it was not to be. The Heavens decided to play one last practical joke, as it began to rain once more while the game was in session. Undeterred, the game continued on. Even with the wind whipping in their faces and the rain blurring their vision, the play continued at the same speed and intensity. The fresh earthy smell of rain contrasted against the fire and passion that was being displayed by the teams. 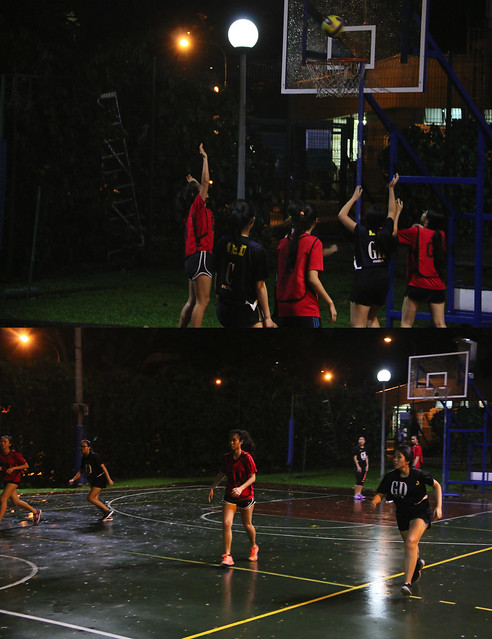 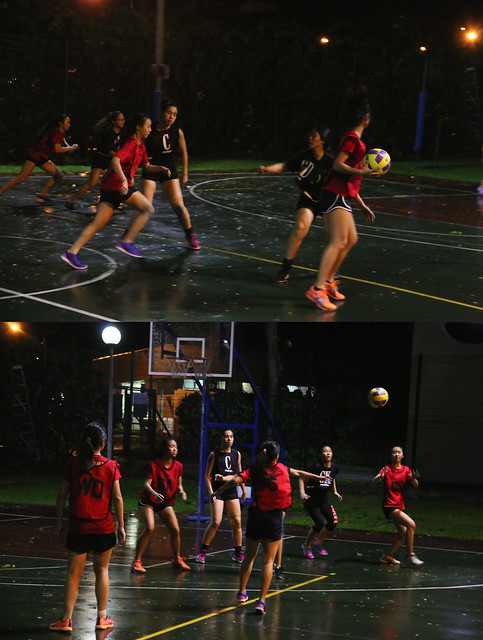 In the end however, the Law team was not able to make up the large difference in score. What impressed me most, was the team’s camaraderie and friendship. Once the last quarter was finished with the blow of the umpire’s whistle, and the mandatory handshakes and cheers for the other team were done, the Law team huddled together for a group hug, even though all of them were sweaty and drenched by the rain. The Captains commended everyone for their performance on the court — there was no finger-pointing or blaming going on, rather, just a heartfelt appreciation for everyone having sacrificed their time to be there.

(Shout out to the umpire Yani as well, who was not from either Faculty, and even had midterms the next day, yet willingly came to help out)

The night ended with a group photo with both teams, standing side-by-side, truly representing the spirit behind the LawMed games. 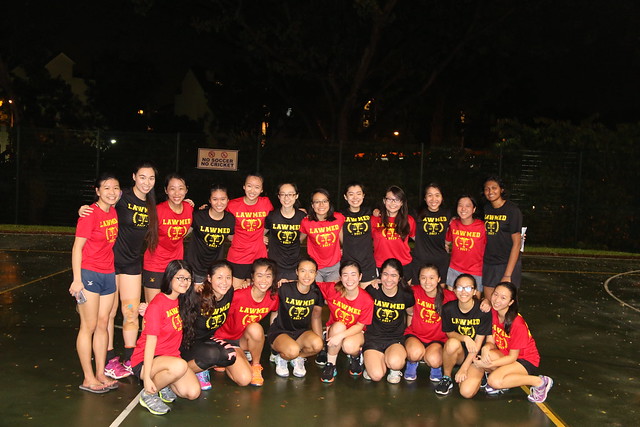 All smiles after a good game.