TLDR WE WERE 1st RUNNER UP. 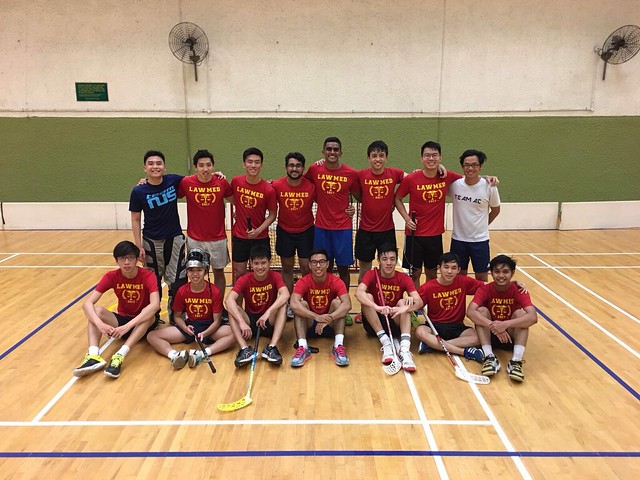 In the wee hours of Sunday morning, a group of young men woke up and eagerly grabbed their sticks to make their way down for the Law-Med floorball match. (With the exception of Ryan Ong who had no respect for the reporting time and sauntered in an hour late. It is my painful duty to inform you that this tardiness continued as Ryan failed to score any goals against medicine.)

After a rigorous hour of warming up, Captain Hairul “The Beast” Siddeeq gathered the team for a pep talk, “Guys don’t need to get injured, just play it cool”. We played 3 halves of 20 minutes each. We are pleased to announce that Law emerged as first runner-up in this prestigious tournament, with a final score of 13-2 (unfortunately we are the 2).

Law dominated the opening with defender Dion “CUTIEPIE” Ng cutting off a strong medicine attack. Dion skilfully manoeuvred the ball and found an opening, passing the ball forward to the attackers. Ervin, took this opportunity to secure the lead with a well-placed shot that left the Medicine keeper dumbfounded.

This enraged Team Medicine who proceeded to lead an onslaught of attacks. Team Law keeper, Marcus Hoh, made several beautiful saves showing nerve and raw talent (it was only Marcus’ second time playing as keeper, the first being the training on Friday). Unfortunately, the Medicine team quickly equalized and took the lead. Marcus was kindly offered gloves by the Medicine keeper, however he felt he was too much of a man to be encumbered by protective equipment such as gloves (“nvm, you use first”- to the Medicine keeper). Despite our best efforts Medicine managed to put away 7 goals in the first half. 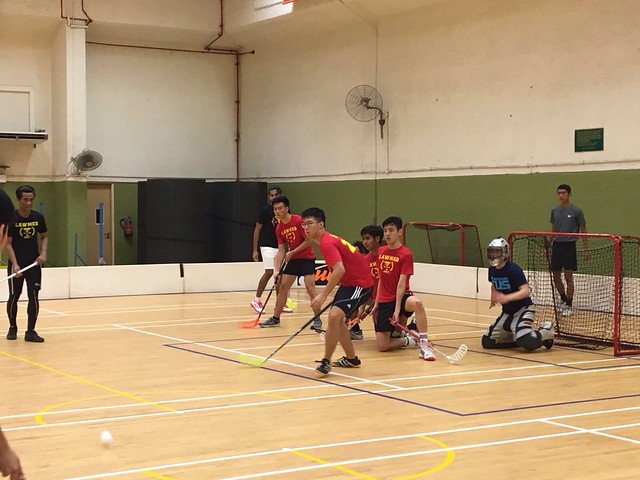 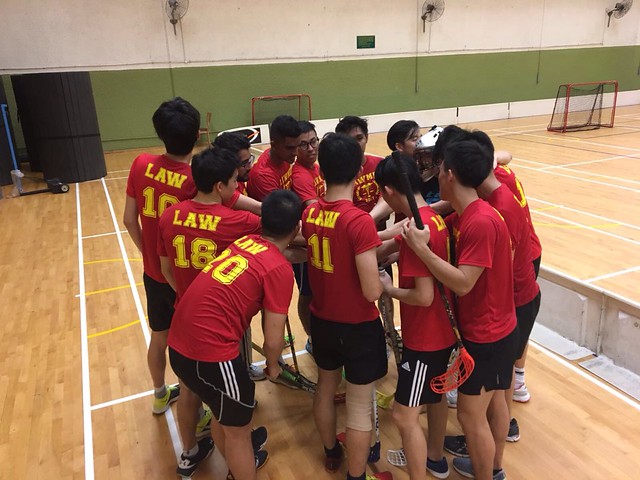 Motivational talk by the Captain. (Ryan Ong clearly uninterested and looking the other way (he’s the small boy next to the helmeted dude).

During the break Team Law decided to change strategy, taking a more defensive approach with man to man markings in the second round. This change of strategy proved to be effective as team Law had more possession and control in the second half. Team Law led a series of attacks which were unfortunately cut off by the medicine defenders. However, Zaki found the gap in the defence and skilfully put away a goal straight through the arms of the Medicine keeper. 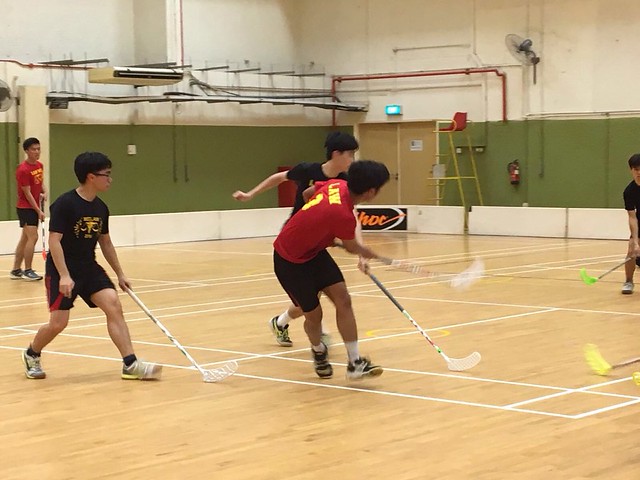 Zaki gearing up for a shot

Team law conceded 4 goals in the second half. Marcus Hoh showed great skill as he made several wonderful saves (though I’m sure at this point he regretted not accepting the gloves from the medicine keeper). Defenders Samuel Sum and Ern Xu also put up a brave fight cutting off several attacks. 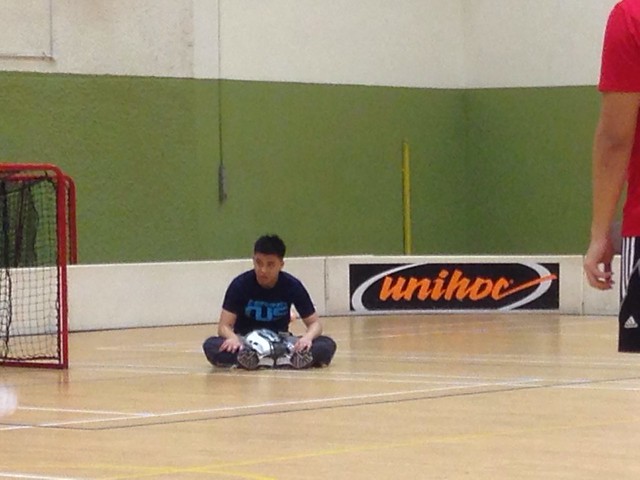 Can you see the regret on Marcus’ face?

The game intensified in the third half with an unfortunately injury for team Medicine as one of their players sprained his ankle (no foul on law’s part, though Jevon Leong was strongly suspected of foul play. We were all quite surprised that he was not involved). Luckily for him there was immediate medical attention available, cause like they all doctors mah? 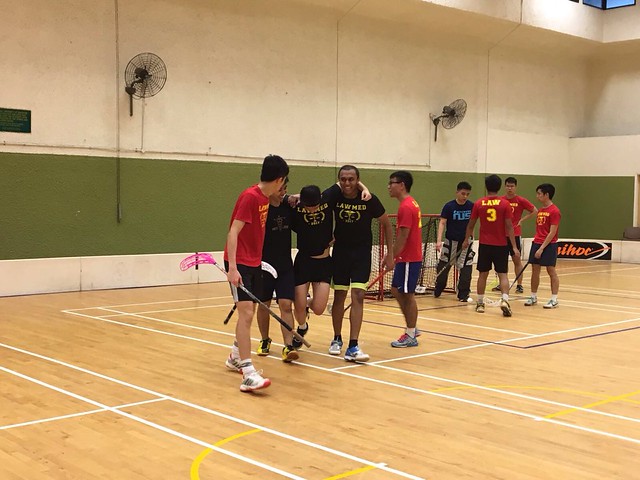 The Medical crew was efficient. Rumour has it that the injured player diagnosed himself and started immediate treatment on his own instructions.

Y1 forwards Alex, Matthias and Jacob tried to find the gaps in the line but were unfortunately cut off by team medicines defence. There were talks of match rigging as team medicines keeper is none other than Matthias’ brother. Matthias being an all-round nice guy decided that familial ties were more important than a law med victory, and refused to score against his dear brother. (pls get your priorities right matty). 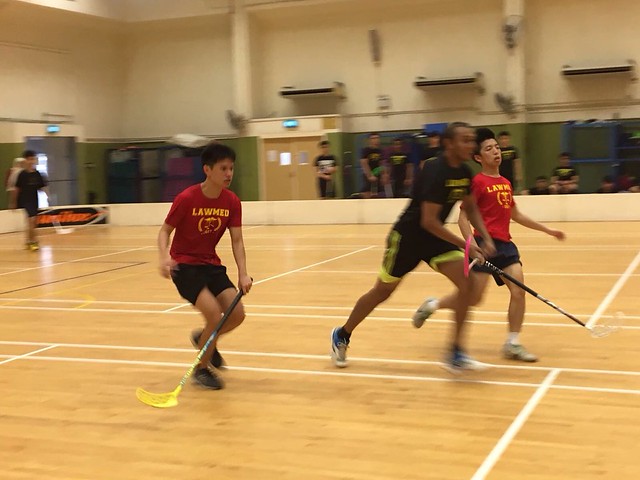 Ryan Ong getting easily overtaken by the Medicine players.

It is noteworthy at this juncture that Ryan Ong had still made no significant contribution to Team Law (shame on you Ryan). Law put up a good fight in the third half, only conceding 2 goals. That led to a final score line of 13-2, with time-keeper Marc “legend” Leung tactically blowing the final whistle as Medicine led another attack. Marc also pointed out that the team Medicine keeper let in 67% of the goals (we only had 3 shots on target) a poor performance compared to Marcus Hoh whose hands were battered by the end of the match…next time just take the gloves Marcus. 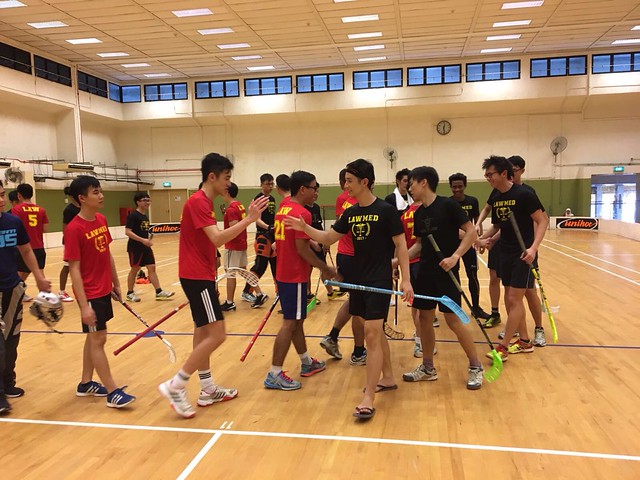 Fraternizing with the enemies

With that, both teams gathered for a friendly handshake and photo. Captain Hairul “The Beast” Siddeeq wasted no time in returning to U-town for his Sunday gym session, a luxury which he cannot enjoy in the BTC campus on Sundays. For those of you yet to catch a glimpse of “The Beast”, a stroll past the gym on ANY weekday evening will have its rewards.