After being pushed around by the Medicine both on and off the court, Law finally drew a line in the sand. Despite being the bigger faculty with a greater talent pool to choose from (Year Five medicine students + nursing students), they had the audacity to attempt to ban us from playing our exchange players.

When it was the Floorball (Men) team’s turn on the court, they tried to pull the same stunt.

Their sports secretary told Ashvin in his face, “I’m going to give you three options. First, you don’t play your exchange players and the game goes on as usual.”

Ashvin: “That’s not even an option to me. What’s the other two choices?”

Ashvin: “Okay, we forfeit the point to you, but we’re still playing.”

Drawing the line in the sand, Ashvin told his team the news. “This is no longer for the points. We’re giving it to them. We’re doing this for pride, we’re taking a stand.”

The game was intense from the start. Within five minutes, a scuffle between See Toh and one of the medicine players occurred near their goal. Tensions continued flaring and several heated exchanges took place. At one point, the referee even summoned both team captains and warned them to, “Stop challenging my decisions.” However, law managed to score the first goal, though medicine was able to equalise soon after. Thus marked the end of the first third of the game.

With the score tied at one apiece, both teams made several counterattacks. Mad props must be given to Eddy, who kept his cool through out the game. If not for Eddy, I am sure that medicine would have scored numerous times. At one point, one of the medicine players was dealt a two minute suspension for being overly rough, but the law team was unable to convert during this brief window of opportunity. Finally, about halfway into the last third of the game, Law scored the second goal. With only 4-5 minutes left in the game, it became a desperate defence, to just keep medicine in bay long enough for the time to run out. And defend they did. The floorball team became the first team in this year’s Law Med challenge to beat their medicine counterparts.

And medicine finally decided to give us the point afterward. 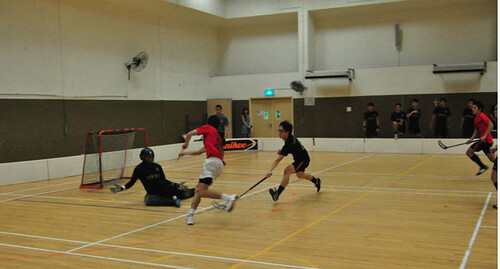 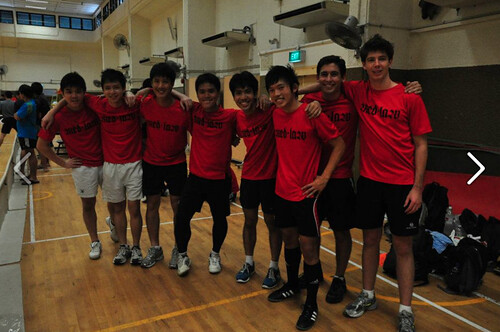