9 after thoughts from the Handball Match

Do not let the crushing 14-7 score-line deceive you into thinking that we had an easy and straightforward game against the Medicine team. We played a game filled with passion and intensity. We dominated the game with our breath-taking attacking plays and spirited defence. Most importantly, amidst all the adrenaline and testosterone out there on the handball court, we kept our tempers in check and played a dignified, gentlemen’s game.

Is it just me or does everyone else think that it is rather ironic that our prospective doctors came across as a xenophobic bunch of people. This wasn’t just a simple “exchange students can’t play because they don’t belong”, and anyone who says that is just naÃ¯ve. Exchange students form part of this faculty even if they are only around for a year. They have trained hard with the team and enjoyed many wonderful moments together. It is not up for you, as an outsider, to tell us who does and does not form part of our community. If the object of the games is to foster greater cohesion between two great professions, then sadly, such a stance is certainly creating more aggravation than it’s worth.

N.B. This is entirely my opinion and is not, in any way, reflective of the opinion held by Law Club or Law Annual. 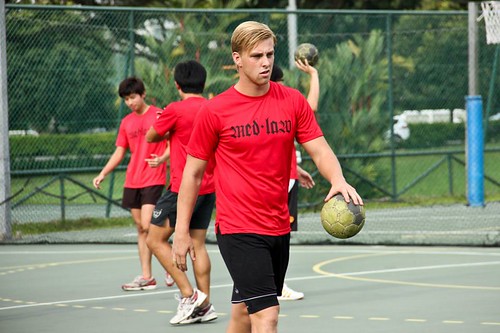 Axel, our Swedish friend on exchange

It was somewhat poetic and deserving that the men at the centre of the controversy were the ones who resolved it in the end. Kudos to Shoban who found the grace and comity within himself, to moderate his views from what many of us perceived to be a very harsh and unreasonable stance. Many thanks to Boon Gan for keeping his cool (most of the time at least) in communicating our position in this issue and not compromising on his principles. In all, the team was particularly relieved that the handball game could proceed on such amicable footing. For this, we offer both Shoban and Boon Gan our gratitude. 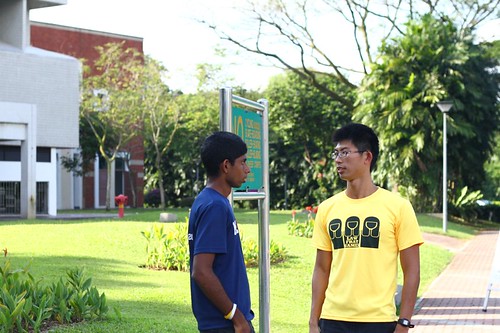 N.B. Un-verified sources indicated that something might have sparked off between the two during one of the emotionally charged moments they shared.

Before I get on to the actual game, I would take this moment to thank all the wonderful folks who took time off to cheer us on. Special shout-outs to Isaac (year 2) and Hazmi (year 3) for an exceptional display of ‘trolling’ from the sidelines. Photographers for the event, Vinna (Year 2), Joyce (Year 2) and Ryan (Year 2), what can I say? Such a wonderful job at preserving the victory for us through those photographs! You guys took much better shots that the medicine boys could muster through the entire match. 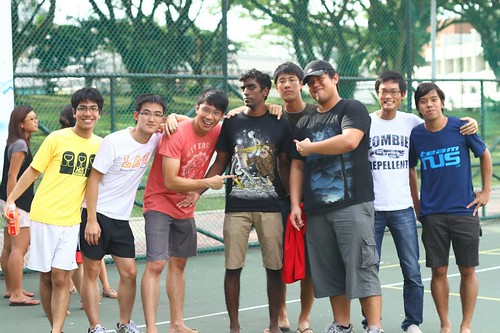 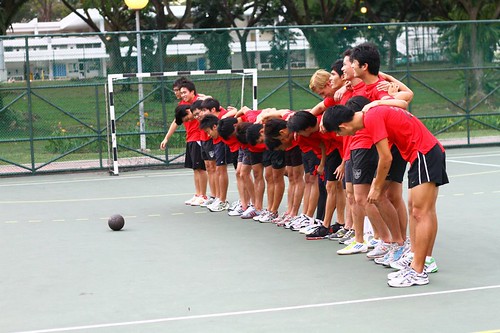 Eddy’s impact on our development as a team is perhaps too profound to adequately sum up in words. Just like myself, what Eddy lacks in height, he makes up for in stature. Thanks for keeping morale and discipline high throughout the entire training season right up to the match. 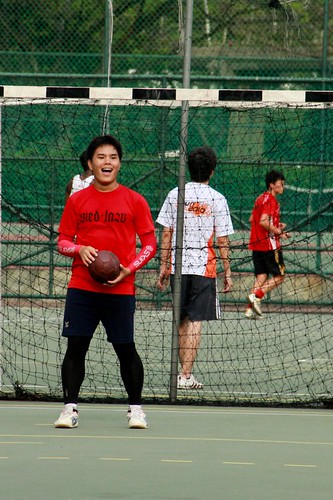 We took the lead early on in the game and never looked back. Despite this, we were grossly unsettled in defence — looking shaky and uncertain at times. Quite plainly, we were taken aback because we didn’t expect to play defence against a determined and physical team that lacked skill and finesse.  Just as Axel has put it rather aptly during a time-out, “we need to adjust to playing defence against a team that doesn’t know how to play handball”. 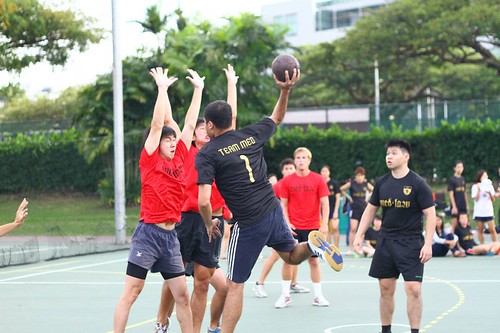 Team Medicine’s approach to the game was devilishly simple. For whatever short-comings they had, they would compensate it with brute strength, a dogged determination to win at all costs and a woeful disregard for the rules of the game. It was as though they had forgotten the Hippocractic Oath they took before entering Med School. Unfortunately for them, the match officials did not take too kindly to their game plan. 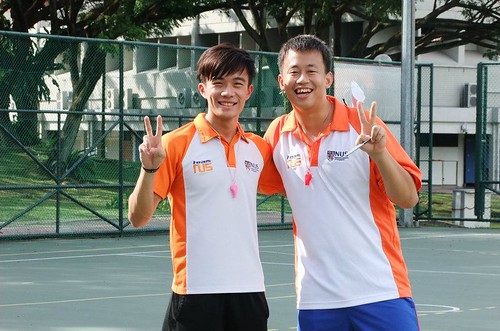 What resulted was a flurry of penalties awarded (and unwaveringly converted by Eugene and Axel), time suspensions dished out like candy during Halloween. Team Medicine collected yellow and red cards as though they were pokemon trading cards. 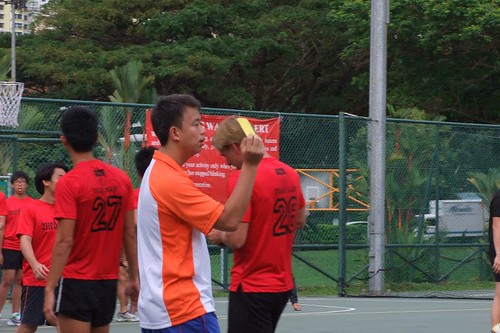 7. Change in tactics and our resolute defence

The second half of the game marked a shift in our defensive attitudes. If the medical team were to approach the game with brute force and perimeter shooting then we were going to rise to the challenge. When the medicine players rose to take a shot, somebody was there to block or deflect it harmlessly aside. When they took a step too close, someone was ready to clamp them down. Eddy was relatively untroubled in the second half with Team Medicine mustering only two goals in the entire 25 minute period of the second half. 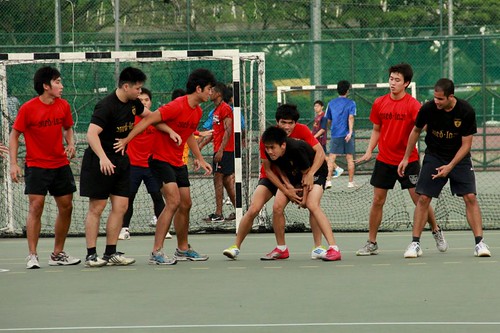 8. We could have scored, easily, more than just 14 goals.

From my totally unbiased and objective viewpoint, the attacking displays we put up against Team Medicine made for utterly compulsive viewing. As soon as Axel scored the first goal, everyone knew that a second goal was soon coming. As soon as we scored the second goal, everyone suspected that a third goal would culminate at the end of our next attacking wave. And the goal did indeed pour in, contributed also by Eugene, Hariz, Pey Yann, Yi Zhang, Yee Keong and Marcus. You see, apart from Axel, Team Law has quite a few players who can easily dispatch the ball into the back of the net when presented with a clear opportunity. Team Medicine’s defensive line presented little resistance as we tore them up with our quick passing and attacking runs. If not for the sublime performance put up by their keeper, the scoreline would have been a more accurate reflection of their defensive disaster. 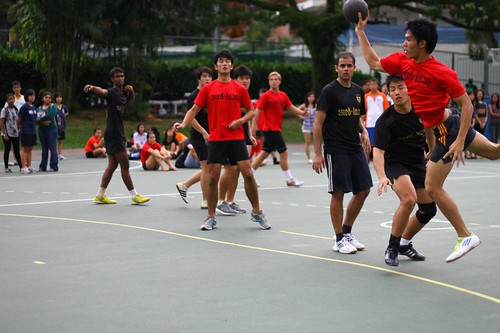 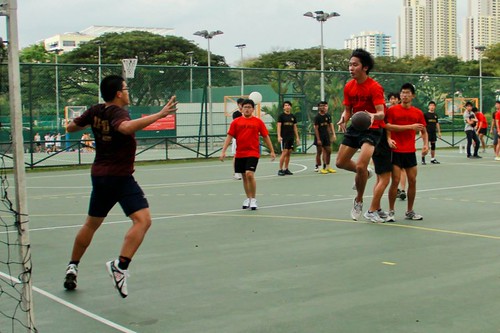 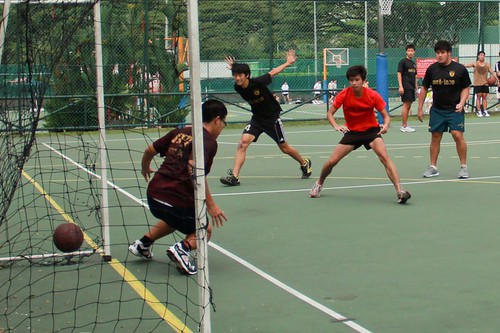 This article has gone on for far too long and the chief reason for this is that it has been such a pleasure to pen my afterthoughts after this game. It is indeed extremely bittersweet to lose so terribly in 2011 only to come back the following year and defeat Team Medicine on their home turf. Hariz, Eddy, Mark, Zhao Han, Boon Gan, Yi Zhang and Yee Keong would surely know what I am talking about. Honestly, I’m still not quite satisfied with what we did this year and am looking forward to dealing Team Medicine one more crushing defeat before I graduate. 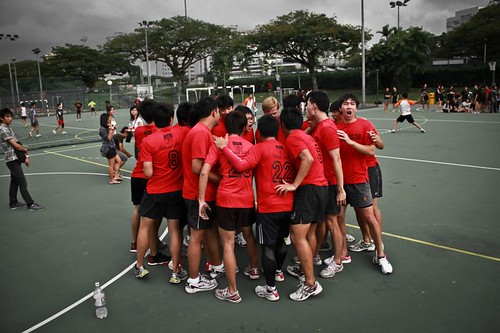 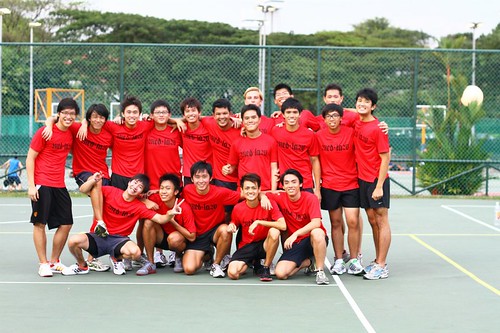