For two hours on Monday, 13 Feb, I struggled through the equity & trusts lecture. Not because I couldn’t grasp the content no matter how hard I tried (I wasn’t even listening), but because I was insanely nervous. I wondered if the banana cake I’d munched for lunch was enjoying an afternoon swim with my innards.  Just the night before, Rachel (Year 4) had tagged me in a Facebook post that declared: “Ball of nerves about tomorrow!” A ball of nerves I indeed was. And justifiably so — the pressure of living up to our IFG championship title weighed heavily in the absence of our star exchange player, Line, who led us to glory last year. And the burning desire to redeem the title that we had so dearly lost the year before (2-0 to medicine) did little to calm those nerves.

We went into the game with a strange state of mind. The last we checked, the men’s floorball match (together with 3 other sports) no longer counted for any points in the title race. While the team was warming up, news hit that the floorball girls’ had unfortunately bowed out too. So that meant we only had 8 official events, of which we had just lost 4. The question of whether Law School retained any chance of winning the Law-Med games fell to be decided by our match. Deja-vu???? To make things worse, we had no field lines. The rather feeble defence: The contractor/ line-painting dude that medicine had contacted simply did not show his face. On that huge, shapeless second field, we had to deal with cones. Talk about being unprepared.

Nevermind — the game had to go on. And it definitely wasn’t an easy game. To their credit, medicine had prepared a very strong team. Their first touches were firm, and they were unafraid of pumping balls into the air. Their defensive line appeared impenetrable; the gameplay dominated in their attacking half of the field. They towered many of our players, and they dared to assert physical might as they raced down the field. They had seven players on standby; we only had four.

But we had heart. With a defensive formation of 4-5-1, our mid-fielders were unstoppable. They tirelessly chased after balls, obstructed medicine’s attempts to make passes, and took on the full force of headers whenever they could. Bevelyn (Year 4) was our energizer bunny with amazing determination that definitely messed with the medicine players’ minds; Wan Yi (Year 2) was our Roy Keane with her speed, aggression and power-driven shots; Eunice (Year 1) was always strategically positioned to intercept balls and, with a fine display of skill, penetrated their mid-field to bring the ball back to our half. Ariel (Year 2) and Arias (Year 2) embodied aggression of the finest sort when they came on, clamping down on the medicine players and cramping their game.

Yet a shot at goal remained elusive, with medicine capitalizing on numerous attacking chances. Just before half time, they were awarded a free kick at the edge of the penalty box, though their hopes were dashed soon enough, as the ball barely grazed the top of the post. They had a couple more shots, all of which went straight into the hands of our ever-alert keeper, Jolyn (Year 2). Half-time, and we were (I was) already panting. Nevertheless, we entered into the second half with renewed vigor and grit, and to say the least — we held up. Our defence remained tight, blocking all the crucial shots, and preventing their wingers and/or strikers from making decent crosses or shots at goal. Our centrebacks Wei Lin (Year 4) and Natalie (Year 1) were solid, clearing the balls whenever they could. In both the first and second half, our left and right backs, Larisa (Year 1), Charlene (Year 1), Claire (Year 2) and Xin Ying (Year 3) forced players into the corner and made excellent intercepts. There were moments we managed to break through their defence and tear through towards our goal, aided in no small part by left-wing Hannah (Year 3) and our sole striker Rachel (Year 4), with such speed and fine dribbling that got all our supporters on the sidelines raving madly (I know this because….I might have been slacking and not supporting my players sorry). While we were delayed by a couple of sickening muscle cramps (Wan Yi and I), the team was undeterred, and both us unfit and under-hydrated players were back on the field in no time.

Unfortunately, both sides were unable to slot in a goal, and the game stretched into extra time of 10 minutes per half. By then, everyone was visibly fatigued, and the spotlights were beginning to flicker on. But press on we did, and…the score refused to budge at 0-0. Thank God for good weather; most of us wouldn’t have survived a 30-30-10-10 minutes match. We tiptoed into a penalty shoot-out, and the nerves were evident. We’d reached a stage where mental focus and delicate control triumphed over physical power; the ball was in anybody’s court. Rachel, Wan Yi, Hannah, Eunice and I then lined up to make our last shots of the game. After two shots on both sides, the score was 0-1 to medicine. I couldn’t bear to watch their shots, and to be honest, I was mentally prepared for a loss. But on our third try, we slotted in a goal that changed the course of the game. Eunice put in our second goal, and we emerged winners, 2-1 to Law School. Credit must go to Jolyn, whose saves were all carefully timed and perfectly executed. Even the boys were impressed at her dives. I’m sure law school has seen no better female soccer goalkeeper than this — Jolyn was truly the (wo)man of the match.

So there was our sweet, hard-earned victory, fought with the consistent rhythm of 15 hearts beating alongside the Law supporters, and with passion that overflowed from start to finish. This article is as long as the 1.5-hour game, but every moment is worth documenting. We had no exchange players, but we held our own, and we delivered a win. So to all who played, and all who couldn’t play (either because of personal commitments or exchange) — this win is yours to savour. This is for our pride (our IFG win wasn’t completely a fluke!), this is for Law School, and this is for the love of the game. 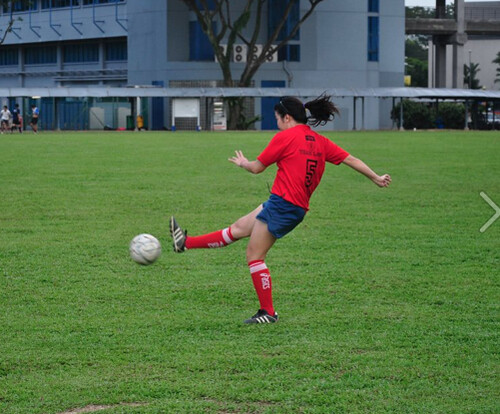 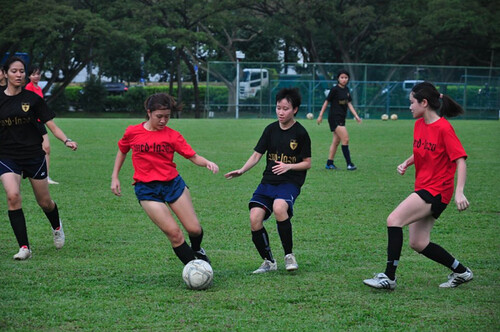 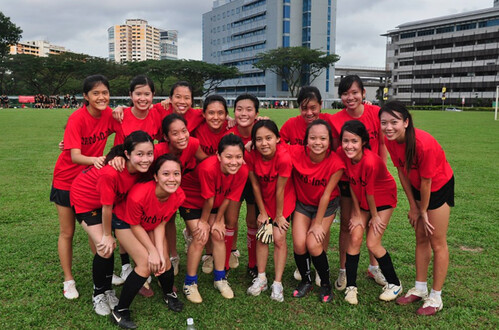