It’s been almost two months since summer break ended and it’s been sorely missed. (Yes, it’s technically summer all year for us, but you know what I mean.) For the seniors, we can only hope that we’ve got back into the groove of school. For the freshmen, I hope you’ve found your bearings in your reincarnation as a law student. Recess week comes about in a week — but don’t get too excited yet. I hate to be a spoil joy, but this only means that half the semester is gone and exams are 10 weeks away. We all know there’s no difference between recess week and reading week, you’ll read the entire week away anyways.

Anyways, back to reminiscing about the summer. Who does romance better than the parisians? And summer in Paris? We’ve found a gem of a song in Summer Flings by a ménage a trios that comes in the handsome form of the band We Were Evergreen.

This folksy-song does the service of taking you back into summers past, and fills it with colour-filtered sunlight, as if the world were taken over by lomo cameras (or, if that’s too hipster for your mainstream tastes, instagram). The light-hearted melody on the xylophone projects a grainy, sepia-toned film about two people burying each other in lotion, while falling in love by the ocean. It doesn’t hurt that the xylophone-playing French girl is quite bit of a looker – there’s just something about them french girls. With the harmonies that this trio string along carelessly, one cannot help but look back on the summer and painfully miss those times. Summer flings, they really go too achingly fast.

As if that is not enough, We Were Evergreen recently released their latest single Baby Blue, in the summer. In this number, they hit the refresh button on the tired story of the struggling artist with catchy rhythms (and there’s that xylophone again) that lament “waiting in a van again” and “nobody knows my name”. Well, everyone should know We Were Evergreen.

And we leave you with Penguins and Moonboots. It’s exactly like teaching speech and drama to a bunch of pre-schoolers on a Saturday morning. With props and toys, the video transports you to a time where you had nary a care, in a world of lunchboxes, playtime and naptime.

It’s okay, if you don’t wanna play. I can wait for another day.

Let’s hope we get to see more of these charming french — they’re especially good for playing in the background while you’re leisurely enjoying your readings over recess week. Now, Paris seems like a good place for exchange. 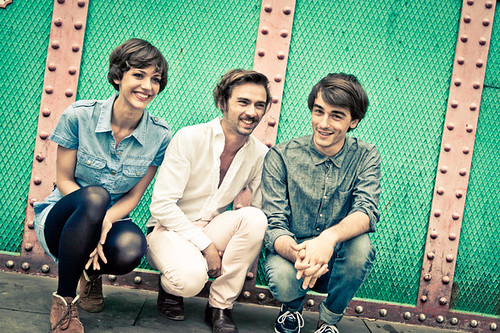