I contemplated making a pun out of “Bar”, but figured it would be too cheesy.

In the second instalment of our LCS dinner series, we found ourselves at the Marina Bay Link Mall after an intense round of negotiations over Thai vegetables. 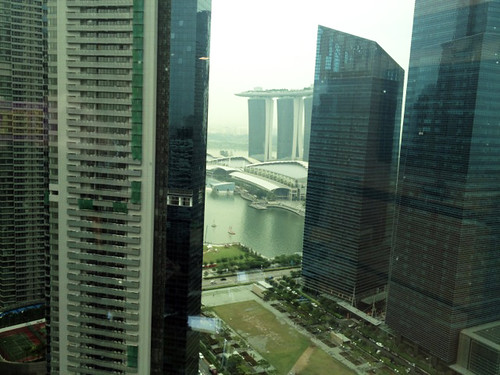 All that talk about food got us hungry, so we googlemapped our way to Standing Sushi Bar, navigating a subterranean labyrinth of elongated pathways that not only led you to where you needed to go, but also provided a cooling respite from the tropical evening heat of the concrete rainforest above.

Standing Sushi Bar was first opened back in 2009 by Howard Lo with an outlet at Raffles Place, but the business has now moved on to three Standing Sushi Bar outlets (Marina Bay Link Mall, 8QSAM, and one in Jakarta), and a sexy oyster bar at Orchard Central, Tanuki Raw. A brief google search showed that this was the same guy who came close to winning Denise Keller’s heart in some channel 5 bachelorette-type show — but ended up marrying a lawyer wife instead.

It was just a little after 7pm. The underground mall had considerably less traffic than the roads just above, as the glitzy Marina Bay financial district hollowed itself out with the men and women of commerce making their way home, and the lawyers da bao-ing dinner back to the office.

Arriving at Standing Sushi Bar, the place was quiet on a slow Tuesday evening. Taking to our seats (no, they don’t really make you stand), the Happy Hour $5 Bar Bites immediately caught the attention of the groupon-surfing bargain-hunter in us. It was also TRY US TUESDAY, where they give you a 50% discount for trying their sushi, sashimi, maki, wine, umeshu, beer, sake, shochu or whisky.

The menu also had a wide selection, from their famously fresh sashimi and sushi, to agemono, robatayaki, noodle and grilled items. We were feeling particularly conservative and so went with some of the more classic options. 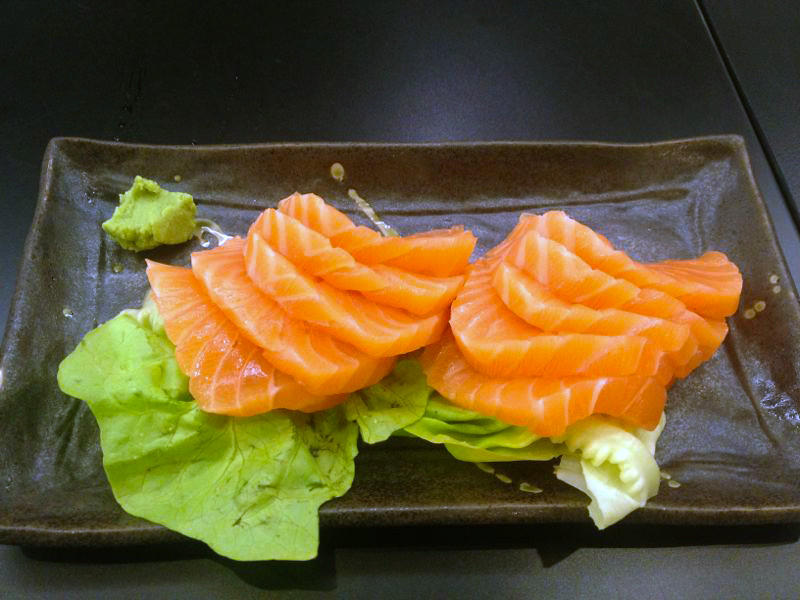 The Salmon Sashimi ($5 for 5 slices) was a blast of freshness packed into thickly cut strips of sashimi goodness – definitely better (by heaps!) than the other places at around the same price point. If you come by the Marina Bay Link Mall outlet on Monday Madness or Thursday Madness, be prepared for some psychological harm, for these babies go for a mad $3 (still for 5 slices). 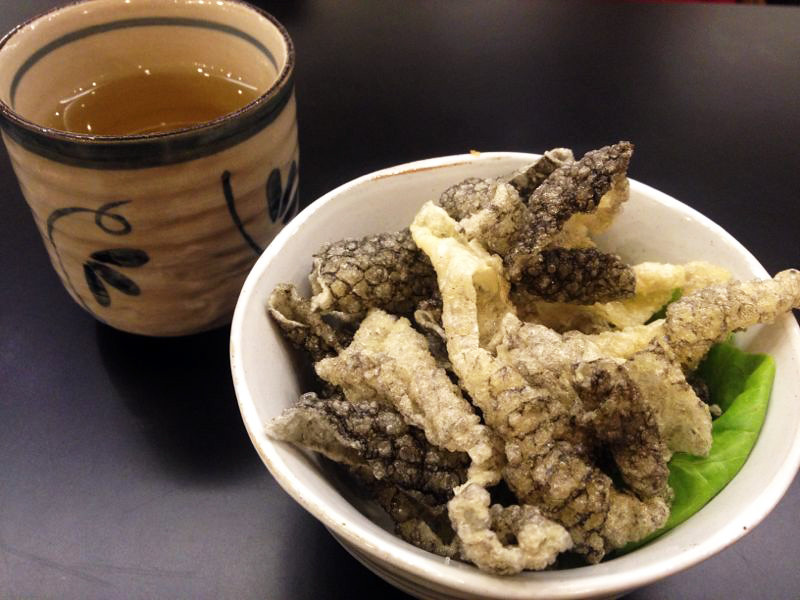 We also had a bowl of Salmon Skin ($5), which came as light crisps of omega-3, salted slightly. They would have been perfect with the $5 Asahi Beer or Sake (Happy Hour), if not for the mugging that awaited us after (which, sadly, never got done). 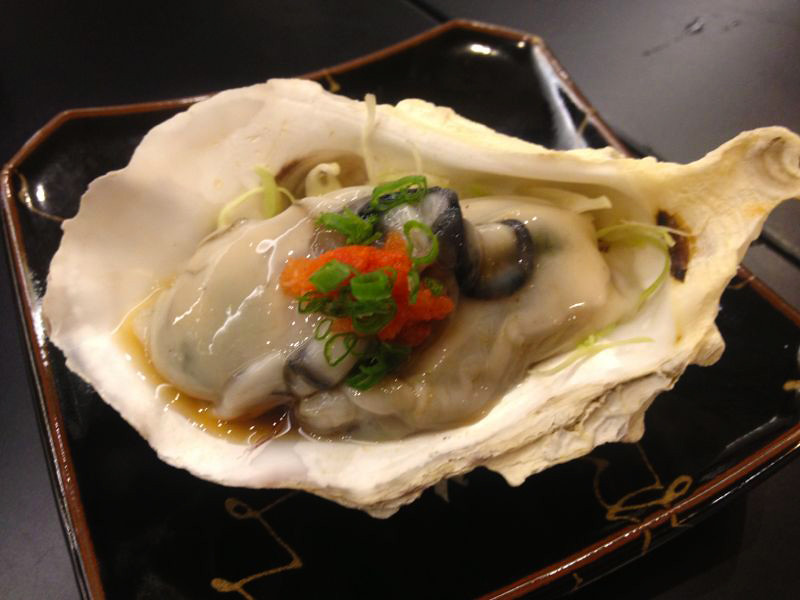 The Japanese oysters ($5 for 2) were a clear winner. I must confess to be an oyster virgin (you can stop judging now), and I must say I had a pretty good first time. There was a certain alluring consistency to the oysters, and they tasted like a salty sea breeze. A visit to their oyster bar, Tanuki Raw, is definitely next on the list. 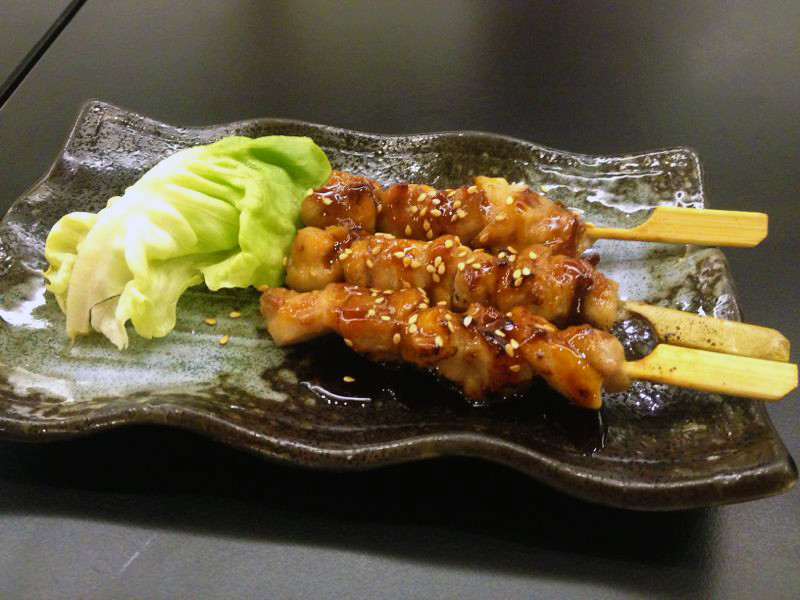 The Yakitori ($5 for 3) came in tender pieces flavor skewered on a stick. Beats the yakitori from the stalls in the basement of shopping malls hands down, in both taste and price. 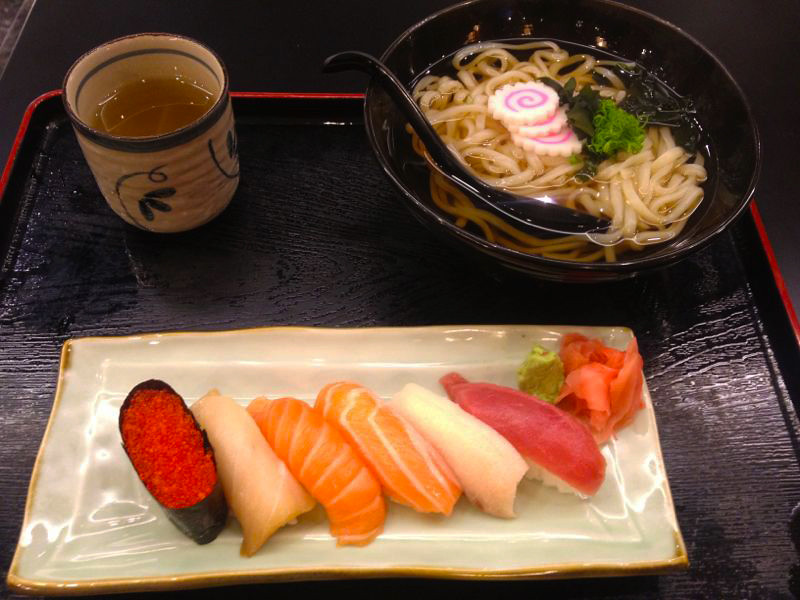 We also got the Haru Set ($20) — which came with a bowl of noodles and a plate of exquisite sushi that included tobiko (flying fish roe), hamachi (yellowtail), salmon, mekajiki (swordfish) and tuna. The sushi was fresh as usual, although the rice had a tad too much vinegar for my taste.

The Standing Sushi Bar serves quality Japanese food at very reasonable prices, and all the more if you come on Monday Madness, Try Us Tuesdays, Salarymen Wednesday or Thursday Madness. Happy hour is 5pm — 8.45pm on weeknights, where you get the $5 Bar Bites, Asahi Beer and Sake.

Now you know where to get your sake/sushi fix during the summer internships.