In the second segment of the sub-club series, we sit down with the MDC, another one of the more prominent sub-clubs in school, and talk to them about mooting, debating, and life in general.

Let’s start from the beginning: what exactly is the MDC?

For the uninitiated and generally unaware, the acronym ‘MDC’ that you might hear flung around from time to time actually stands for the Mooting and Debating Club. And as you probably have surmised, it was indeed established for the purpose of facilitating mooting and debating competitions amongst the student population. It is a subsidiary club under the Law Club and we currently have approximately 100 members.

So what do you guys actually do?

Principally, we have the honor (and the privilege) of organizing mooting and debating competitions for the student population. Organizing a mooting or debating competition is often a long-drawn process, and preparation usually begins months in advance. Usually, we begin by contacting the law firm that is generously sponsoring the competition to get a better understanding of their expectations. In the weeks that follow, we then work closely with a wide range of people, from the caterers (yes, ensuring the quality of the refreshments is undeniably of paramount importance) to the drafters of the moot problem(s), to make sure that everything the competition requires is in order. Understandably, this must sound very much like a never-ending game of chasing people to get things done. Thankfully however, and perhaps this is a testament to the efficiency of our members, things normally get done with little chasing actually required.

While at first blush, all that might sound undesirably tedious, it is honestly less demanding than people make it out to be. We normally work in teams of 7, so the amount of work that each member actually has to do is entirely manageable. Watching an entire event (or series of events as the case may be) come together is also very much like birthing a child: a moderately painful process that culminates in a bundle of joy.

We also receive numerous invitations to participate in moot competitions hosted by foreign universities. While most of the invitations we receive are from universities in the Asia-Pacific region, we have also had the opportunity to send teams to competitions as far away as Belarus and Germany. Part of our job therefore also involves circulating these invitations to the student population as and when we receive them. Given substantial funding is often required for some of these expeditions, we do also assist students in looking for sponsors.

In a nutshell, we work round the year to ensure that there are sufficient opportunities for the students to either practice or showcase their mooting skills.

What is the structure of the club?

The MDC structure consists of the Executive Committee (EXCO) and the various sub-committees. The EXCO is the leadership committee within the MDC and has no more than 7 members at any given point. Essentially, it has the task of managing the day-to-day affairs of the club as well as handling any external mooting or debating activities. All 7 members are Second Year Law students.

What sub-committees does MDC have?

The number of sub-committees varies from year to year. Depending on how many competitions the EXCO has decided to organize for that particular calendar year, the number of sub-committees can range anywhere from 5 to 8. Each sub-committee is in charge of one particular event and handles everything relating to that event. As mentioned earlier, matters within its direct purview would involve liaising with the sponsoring law firm, all publicity matters, logistics, catering, etc. As per tradition, each committee consists mostly of First Year Law students. That is not to say the First years are thrown into the deep end and left to languish on their own, one EXCO member is always assigned to each sub-committee to provide guidance and advice whenever needed.

What do members get to do?

This is part where we try to convince readers to join us right? Right, well, at the risk of sounding entirely shameless: the benefits are endless. But before we proceed to shamelessly deliver our pitch, allow us to elaborate a little more on what our members get to do.

Obviously, our members get to organize moot competitions, that much should be sufficiently clear by now. What we hadn’t mentioned earlier was that our members do actually benefit from organizing such competitions. For one, they get to meet with and speak to practicing lawyers that are usually more than happy to share useful insight into the legal profession, amongst other things. Additionally, they also get the opportunity to watch more experienced mooters or debaters display their oratorical abilities. This early exposure certainly comes in handy when the First Years have to do their LAWR moots at the end of their second semester.

Another less well-known benefit of being an MDC member is the training that we provide. For our First Years, we provide LAWR training sessions conducted by experienced seniors (some of whom have, on occasion, been compared to a certain Master Yoda). Among the types of training sessions conducted, are the viva workshop that is held in the first semester of every academic year and the mooting workshop that we hold in the second semester of the same year.

Apart from that however, our members also have priority when it comes to selection for international competitions. While this might sound somewhat exclusionist, our members do contribute significantly to the club and therefore deserve to be rewarded accordingly, i.e. by retaining priority in terms of selection.

This all sounds great. So how do I get in?

At the beginning of every academic year, we admit between 30-40 new members. The selection process is conducted by the EXCO and normally involves a group interview. Regrettably, the exact interview process isn’t something that we are at liberty to divulge. We can, however, tell you that we normally look for people with enthusiasm and some experience in organizing events. Contrary to popular belief, no experience in public speaking is necessary; we believe that can be developed with practice/time. As long as you are passionate about what you do and do not mind doing organizational tasks, you would fit the bill.

The People Behind MDC 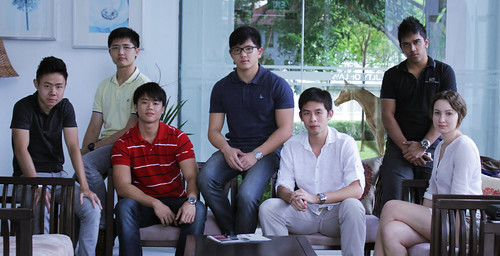 My lords and ladies, allow me to introduce you to Kevin, our capable and amiable Lord Chancellor. As the President for this year, he has the less-than-enviable task of making sure that everyone else does what he or she is supposed to do. He also serves as the main point of communication between MDC and any external parties, a fairly challenging role that often involves figuring out what constraints the rest of us have to work with.

Our capable and ever ebullient Vice-President, Douglas works closely with Kevin to ensure the stable and steady progression of the club. As Kevin’s number 2, Douglas assists in providing the general direction of the MDC.

Today, training is one of the most important areas within the MDC, but it wasn’t always this way. Credit must be given to our dynamic and industrious Director of Training: Hairul. Within a year, he took a fledgling department within the MDC and transformed it entirely, turning it into the main reason why we received a record number of sign ups this year. He is also mostly responsible for all the various training events that occur through the academic year.

If there is one department that should never be neglected, it has to be Welfare. Welfare is essential to the longevity of any venture and that holds true even at our sub-club level. There are many aspects to Welfare but Glenn has them all covered. If there are refreshments after any MDC event, chances are Glenn was the one who suggested it. Think about that.

Getting the opportunity to participate in an international moot is something that law students dream about. Our Director of International Moots has the unenviable task of deciding whose dream ought to be fulfilled. Irina (or Ira, as we affectionately call her) essentially plays a major role in selecting the teams that go on to represent our beloved university.

Money makes the world go round. And in most senses, that phrase is especially true in MDC. Everything about organizing a moot costs money. Well, except for our participants’ time and ability of course. But for everything else, approval must first be sought from our Director of Finance. He has the task of signing off on everything and making sure that at the end of the day, our accounts aren’t entirely lopsided.

The secretary is one of the most understated roles, but yet his importance cannot be overstated. At every meeting, while some of us might invariably doze off or zone out (yes, some meetings can be incredibly draggy), Guo Wei is ever vigilant, taking down copious amounts of minutes to ensure that everything said is not soon forgotten.