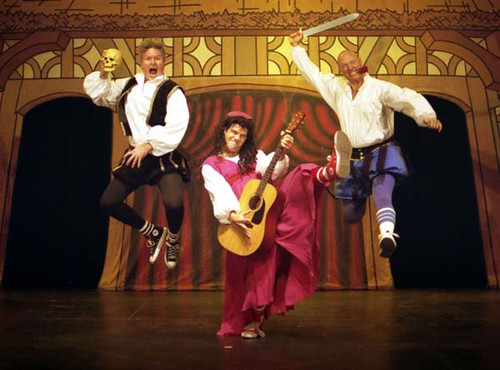 The Complete Works of William Shakespeare(abridged) made for a remarkable night of fun and laughter as the three-man cast of the Reduced Shakespeare Company, comprised of Jeff Marlow, Tiger Reel and Dan Saski, ambitiously attempted to condense all of the Bard’s 37 plays in a mere span of 90 minutes. Throughout the night, the actors’ amazing chemistry, riotous humour and highly energetic performance kept audience on the edge of their seats.

As expected, the play was rife with slapstick humour and silly puns. Before some ‘dangerous’ swordplay, the audience was solemnly warned not to try it at home as they were not trained professionals, but were then advised to ‘go to a friend’s house instead’. Although the props were rather basic, the actors, in their strikingly colourful doublets and tights, had no difficulty in keeping the audience enthralled.  To make the plays more accessible to the audience, many of Shakespeare’s works were given a modern twist, complete with a rap version of Othello. The use of an all-male cast, in typical Shakespeare fashion, also meant that there was quite a fair bit of cross-dressing and falsettos involved, which made for some ridiculously hilarious situations. Coupled with a generous dose of physical comedy, the actors’ renditions had the audience clutching their sides with laughter in no time.  The comedic talent of the cast was undeniable, and was best reflected in their unforgettable encore of Hamlet, which was not only performed backwards, but at increasingly astounding speeds. 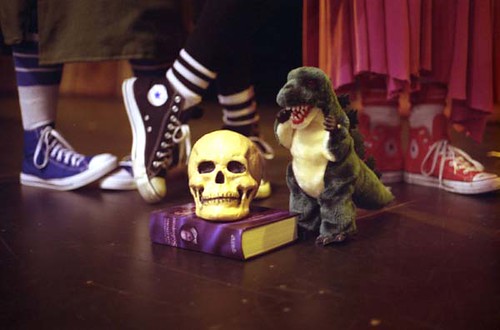 For the more intellectually inclined, the play had its scholarly moments too. In the portrayal of Hamlet’s nunnery scene, the audience was split into various sections to represent Ophelia’s id, ego and super-ego simultaneously, creating a wave of hysteria and culminating in a blood-curdling scream from a selected audience member. There were various other instances of audience engagement, with Saski pretending to throw up all over the audience countless times, and Reel asking for joke contributions.

However, while the play’s title might lead some to think of it as an introductory course of sorts for those unacquainted with Shakespeare’s works, many of the jokes required an intimate knowledge of even the hopelessly obscure ones. As such, having only had a few fleeting encounters with several of the more famous plays (after being irreversibly scarred from reading the Merchant of Venice for school), this author could only find herself laughing confusedly at the actors’ enactment of a mock football game meant to summarize Shakespeare’s ‘histories’ all the way from King John to Henry VIII. The rest of the audience, however, roared with laughter.

With such amazingly talented actors and a perfectly crafted script, it’s no wonder that this play is the Reduced Shakespeare Company’s longest running comedy, and has garnered rave reviews for its brilliance. A word of caution though: there is a real danger that watching this play might tempt you to touch those dreaded books again. 
Hot Chicks: An Afternoon at Jerry's with Spicy-Hot Buffalo Wings