From their easy banter and jokes, the chemistry between Yang Xi and Melissa (or Mel, as she is more affectionately known as) is clear.  There were no hints of the awkwardness that sometimes plagues contestants who are arbitrarily paired together. Instead, the whole interview process was comfortable and light-hearted, with lots of funny comments and interjections in between.  Indeed, the interview seemed less of an interview and more of just any casual conversation between any two friends.

1. What do you like doing in your free time? / What are your interests?

Yang Xi: I don’t do anything in my free time. I like to take a nap. I’m not sure if that is an interest.

Mel: What? That’s so lame. For me, I like to read in my spare time…like novels. Or I like to watch movies with my family and friends.

Mel: Don’t be annoying, my answer is better than yours.

2. What are you looking forward to when school starts?

Yang Xi: I don’t think anyone is looking forward to school starting…

Mel: I’m looking forward to school starting. Like you want to know more about what you’re studying. Like, you’d want to actually get down to it and find out what law is all about right?

3. If you were to describe your partner as a food, what would he/she be? Why?

Mel: Yang Xi is an apple *laughs* When he’s high, his face gets damn red. Plus his face is really round and his face is quite shiny also.

Yang Xi: I had that yesterday; I guess that’s where my inspiration came from. And when she’s high, she gets stoned like a fish head. She’s also quite spicy also – she will scold people.

Mel: Oh, Yang Xi is sweet, like an apple.

Yang Xi: I’m the apple of her eye lah actually.

Mel: See, my answer is so sweet but yours…

Mel: You must say something like not everyone likes fish head curry, but those who like it love it.

Yang  Xi:  Not everyone likes fish head curry, but I love it.

Yang Xi: I’d go back to Japan. It’s the most relaxing place. I like to relax, with some green tea, some Japanese food and some geishas. I love geishas, and it’s a misconception that they are prostitutes, they are actually entertainers.

Mel: Okay, my answer will be quite vague. I just want to go to any cold country. I have never seen snow, and I want to see snow. I want to to be able to wear layers and layers without sweating.

5. If you could go somewhere with your partner, where would you go? Why?

Mel: Aww so sweet, where?

Mel: We will go to the beach. We need a tan, we are both really fair.

Yang Xi: We don’t need a tan. Look at all the Korean guys, they are all fair.

Mel: You are not Korean.

Yang Xi:  What the heck, stop stating the obvious.

Mel: Your eyes are just closed.

Yang Xi: No no no I do my thumbs up sign – my stamp of approval. Let me check for you what Mel does *starts checking Instagram*

Mel: Okay, it’s either the step step look cool or the casually-look-away-while-laughing. Disclaimer: I don’t do it a lot!

Yang Xi: Ohhh it’s the duck face! Look at the bottom right *shows her his phone*

Yang Xi: No, I’m helping you answer the question! Is this your brother? 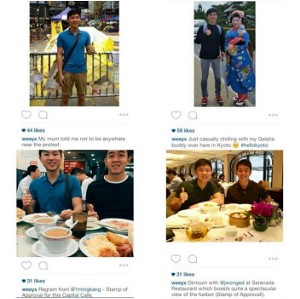 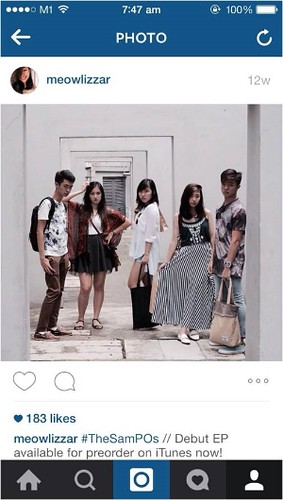 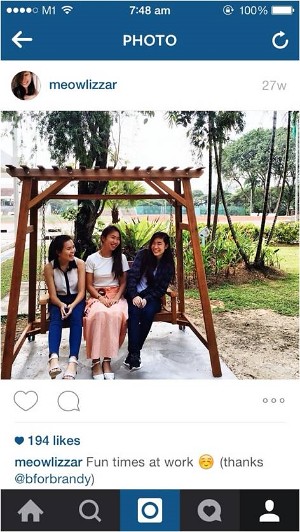 8.What’s the most romantic thing you have done/ will do?

Yang Xi: I’m not romantic. You read chick lit right, you can answer for me.

Mel: For my boyfriend’s birthday this year, I lied to him that I was at rag, but I was actually at this workshop that teaches you how to make stuff from leather. So I made a wallet for him for scratch. I had to punch holes, sew… Yang Xi, what about you?

Mel: But you have a girlfriend! You pushed her around in a shopping cart right?

9. What is your guilty pleasure?

Mel: K drama. People judge you when you say that, but they are good!

Yang Xi: Please vote for Mel. Don’t vote for me.

Mel: That’s not something about yourself!

Yang Xi: There’s something about me at the back – don’t vote for me.

Mel: I’m not sure what I want the school to know hmmm.

Mel: Contrary to what people may think, I’m not interesting. I’m not a mugger.

Mel: Maybe only when necessary. Oh! Despite what my answers may seem like, I’m not actually very weird. I’m very friendly.

Yang Xi: Anyone who has to say that is weird. No drunken person will say he’s drunk.

Mel: Oh can my answer be, some people think I have a bitch face, but don’t think I’m scary! I’m not!

Yang Xi: She’s scarier than she looks. She was nagging at me to hurry up just now. 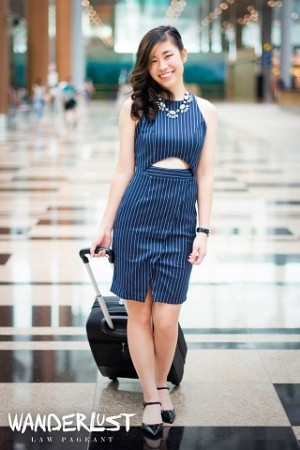 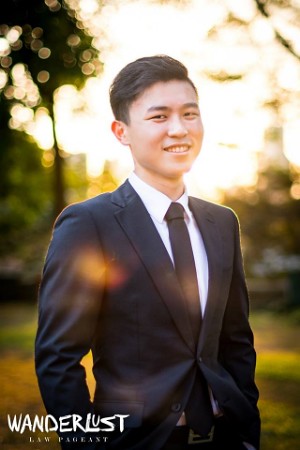 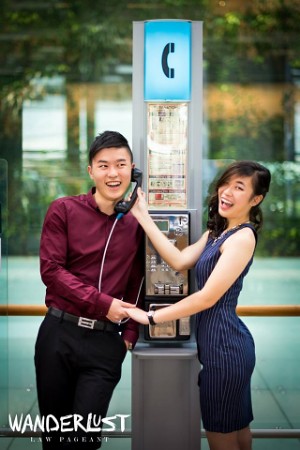 Support Yang Xi and Melissa by liking NUS Law Orientation 2015 page and voting for their Facebook pageant photos till 14 August 2015. Catch them at NUS Law Dinner and Dance on 15 August!

Photography by: Walter Seow (Year 2) and provided by contestants