While some of us might have been revising and preparing for tutorials for the coming semester, a motley crew of final year Law students were busy preparing for this year’s Law IV musical, Faces of Life, over the holidays and Justified had the privilege of getting a behind-the-scenes look and an exclusive interview with the cast and production team. 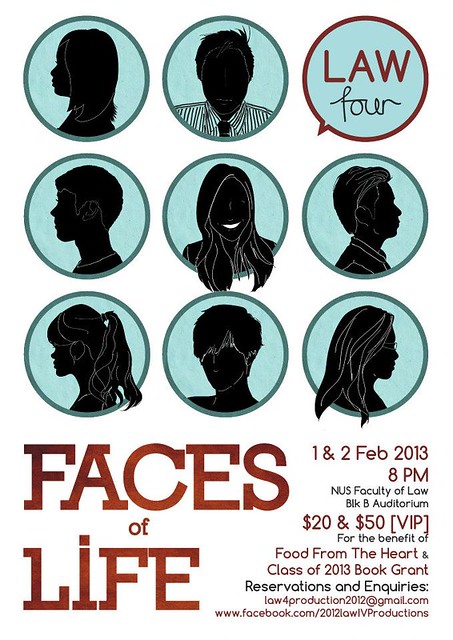 A Journey of Nostalgia

Law IV is produced by the graduating class every year and this year’s production looks like it will take on a more introspective tone. As Rich, one of the cast members, puts it, “This year is different because its about Law students and the unique experiences we have, whereas in previous years, the story was about the law and lawyers in general.”

Liansheng, the scriptwriter and co-director, told us what they wanted to convey in their publicity efforts was a sense of reminiscence – memories of your first moot, first relationship and first failure in school. It seems like it will be easy for the Year Ones to relate to as they embark on a similar journey. Nevertheless, we were assured that while there were some law jokes, most of it will be “family fun”. 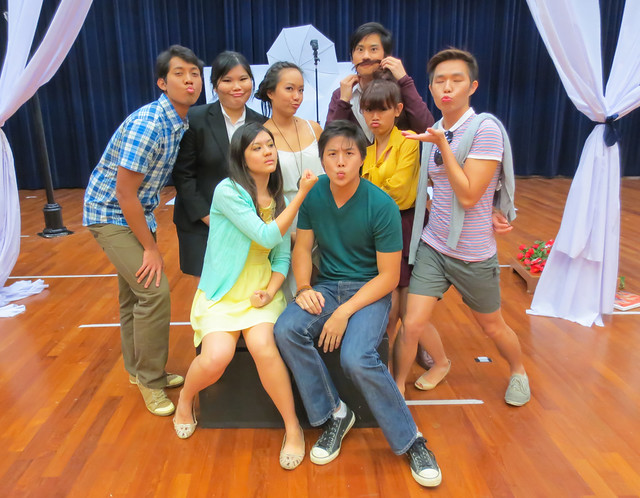 When asked to describe Law IV in one line, the cast scrambled to quote the tagline of the musical: “Every experience we have, every scene we witness, every story we hear from someone… it shapes us in some ways… in ways we would never have imagined”. Hwee Peng, who plays the scriptwriter in the play (there’s some metafiction going on here) quipped, “Everyone hates Liansheng!” to a chorus of approbation and laughter from the cast.

On a more serious note, Liansheng told us it was about the experiences we have as students and, for him, trying to make the best of what we have before we graduate. He was particularly heartened that his batch mates were excited to come together to put up a performance as a batch, despite everyone being busy with their individual commitments. 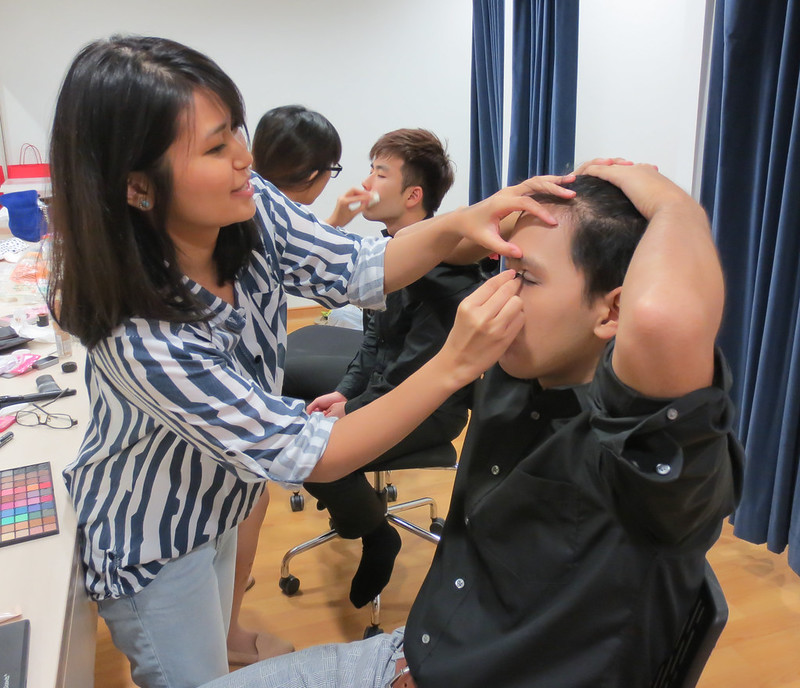 The ensemble cast was tight-lipped about the details of the plot, being apprehensive of giving too much away. We got the sense that Law IV is going to be a menagerie of quintessential Law school experiences, acted out by a diverse cast of characters – “everyone’s a main character!”

There’s the scriptwriter (Hwee Peng), who writes the Law IV 2013 script based on her experiences with her friends in Law school; Faizal (Fuad), who represents the “minority” in school; Germaine (Qiuyu) the “typical Law school b*tch”; Chuan (Rich), who comes from a non-elite school and enters Law school with dreams of earning big money; and also Dawn (Alyssa) and Damien (James) – a pair of twins that make up the comedic element of the play. 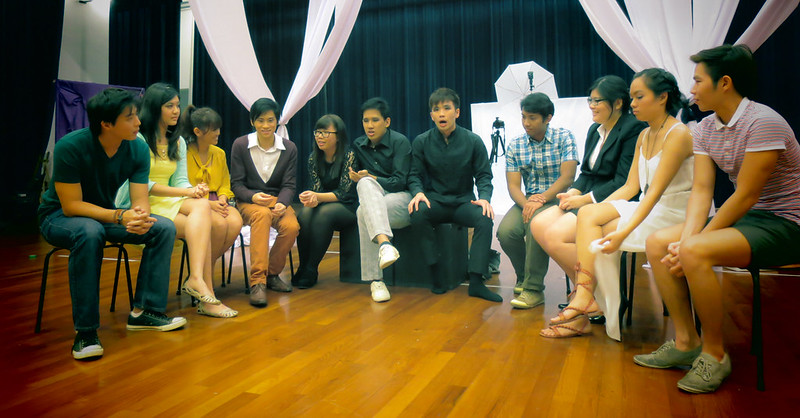 It was evident that the cast had a lot of chemistry and camaraderie; they had no misgivings about laughing at and making fun of each other. We asked them what was the toughest thing about being in Law IV and Alyssa promptly remarked to James, “Seeing your face!” Sean, in self-deprecating fashion, pointed out that Cherissa (who plays Belle) probably has the hardest part because she has to have chemistry with him. The cast raised their objections, arguing that they “totally” have chemistry.

Since the play is about “firsts”, we got the cast to share their most memorable first experiences in Law school. For Liansheng, it was his first meeting with Prof Eleanor Wong (“She’s going to kill me for saying that”). It was a tough question for the cast who have had plenty of firsts and being in a theatre production like Law IV was perhaps a first for some of them.

Fuad recounted the time in Year One when Prof Beckman skipped his own SLS class. In keeping with his tradition of sending send out text messages with the names of people who missed his class, Prof Beckman included his own name in the text message to everyone and ended up giving them all a buffet brunch. Someone must have also made fifty bucks out of this, since it made it into The New Paper.

We asked them how they would describe their experience working with the directors and Sean told us that it was a “very experimental process”. While it was fun, he acknowledged that the process could be frustrating at times. Working with directors, it seems, is nothing short of a chemistry experiment (pun intended), but things will work out eventually. “At the end of the day, when you can see their vision, everything eventually comes through,” quips Sean. 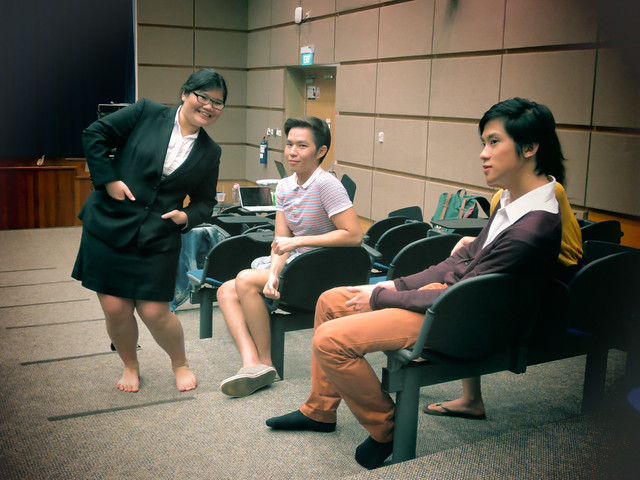 Some members of the cast had the challenge of playing characters who have a different personality from their own. Cherissa, who sees herself as an effusive and rambunctious person, told us that playing Belle did not come as second nature. She shared with us how playing her character required a lot of thought and imagining herself in the character’s shoes within the context of the entire musical. However, things were different for James, who said (very self-deprecatingly) that he could identify with his character since they were both “full of shit”.

A Labour Of Love

Why watch this year’s musical? Rachel, co-director, reasoned that they had 9 scenes worth $5 each so it will be value for money (tickets are going for only $20). Cherissa exuberantly professed that it was a labour of love, worth watching because of this very different bunch of people coming together for a batch production.

However, if that doesn’t convince you, Zu Hao (the co-director) appeals to the charitable hearts. All the proceeds from the entire Law IV venture will go towards 2 beneficiaries: Food from the Heart, and a book grant for Law students, a new initiative by the class of 2013.

Food from the Heart is a charity that distributes unsold bread to low-income households. Beyond simply raising funds for them, the class of 2013 is also looking to join in the distribution efforts as well.

The book grant is a more internally focused charity and will go towards supplementing the academic needs, like books and tuition fees, for underprivileged Law students. Over time, they hope to increase the quantum of donations and even turn it into a full scale bursary. Because this is a pioneer initiative, a lot of long term details have not been finalized but Zu Hao envisions this to be one of the channels the Class of 2013 can give back in future. 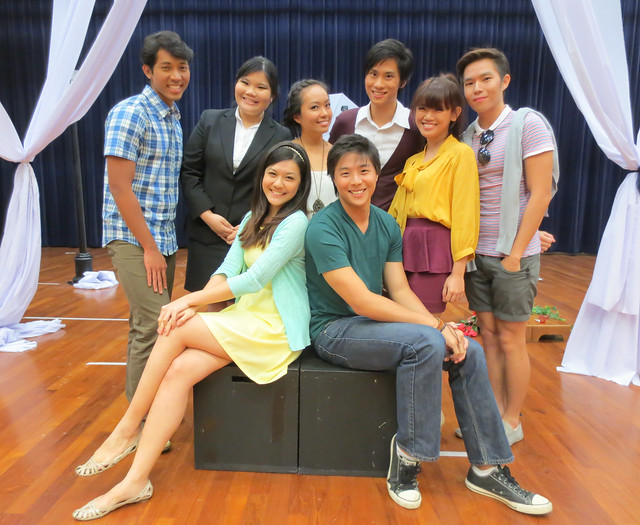 This year’s Law IV looks set to be heartwarming, hilarious and a very value-for-money collection of $5 scenes. The directors promise something different from previous years – you just might find snippets of your law school life up on stage! Tickets are on sale at $20 (Free Seating) or $50 (VIP) at the Law IV booth outside the Coop. For more information or reservations, email [email protected]

Thanks to the good people at LAW IV, we’re giving away 2 free passes to the Law IV 2013 – Faces of Life!

Who are the 8 actors and the 2 beneficiaries for Law IV 2013? (Hint: Answers can be found on the Law IV Facebook page )

Submit your answers here! One winner with the correct answer will be decided in a random draw. Deadline: Sunday, 20th January 2013, 2359.

Law IV 2013 is proudly presented by CYC The Custom Shop. Visit the Law IV Facebook page for updates and more information. Law IV 2013 is kindly made possible with the generous sponsorship of Joyce A. Tan & Partners, Shook Lin & Bok, and WongPartnership. 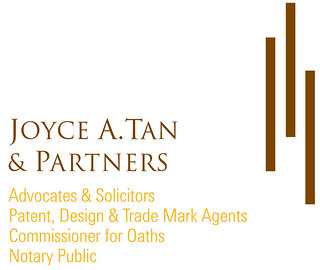 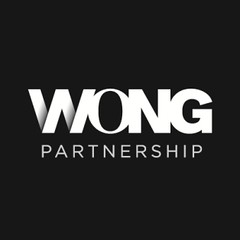 
A Journey in Twelve