It is a pleasant feeling when you see someone reminiscing about old times and chuckling to himself. You know that it is a moment exclusive and a joy private, yet somehow inexplicably it captivates and intrigues. The story I am about to share is one of these untold joys.

This journey began in a place far far away, once upon a time… 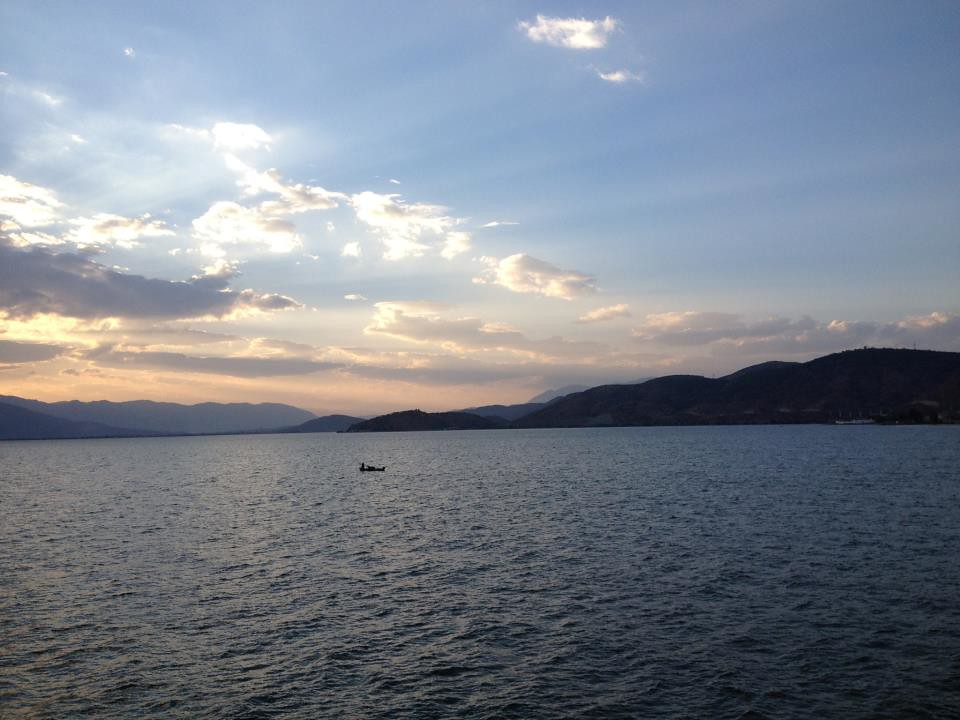 Where a love story — one not so conventional — began to blossom… 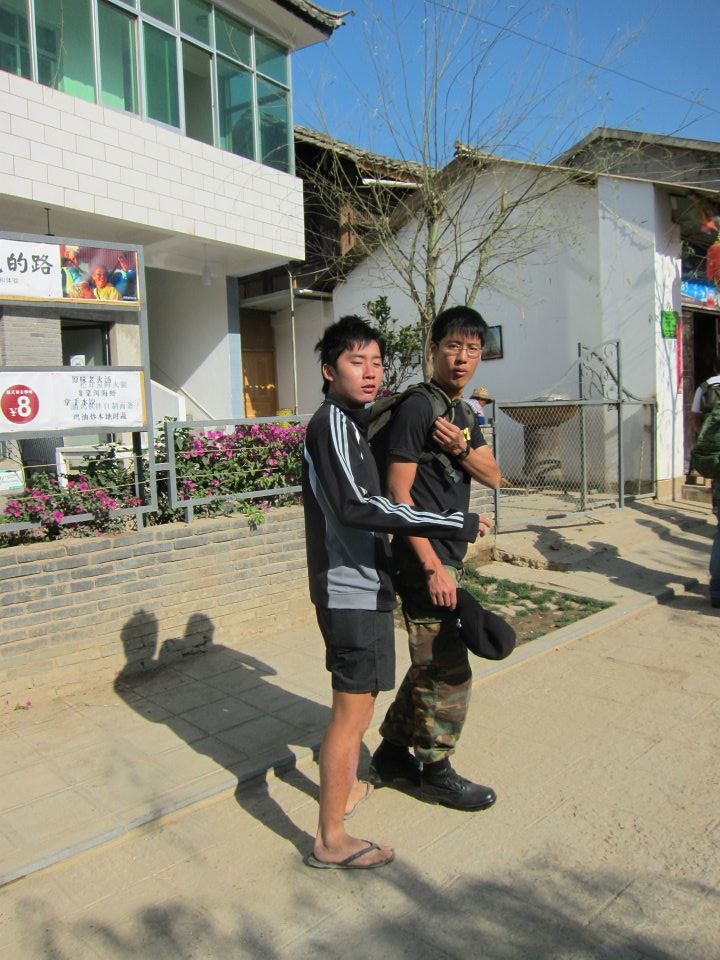 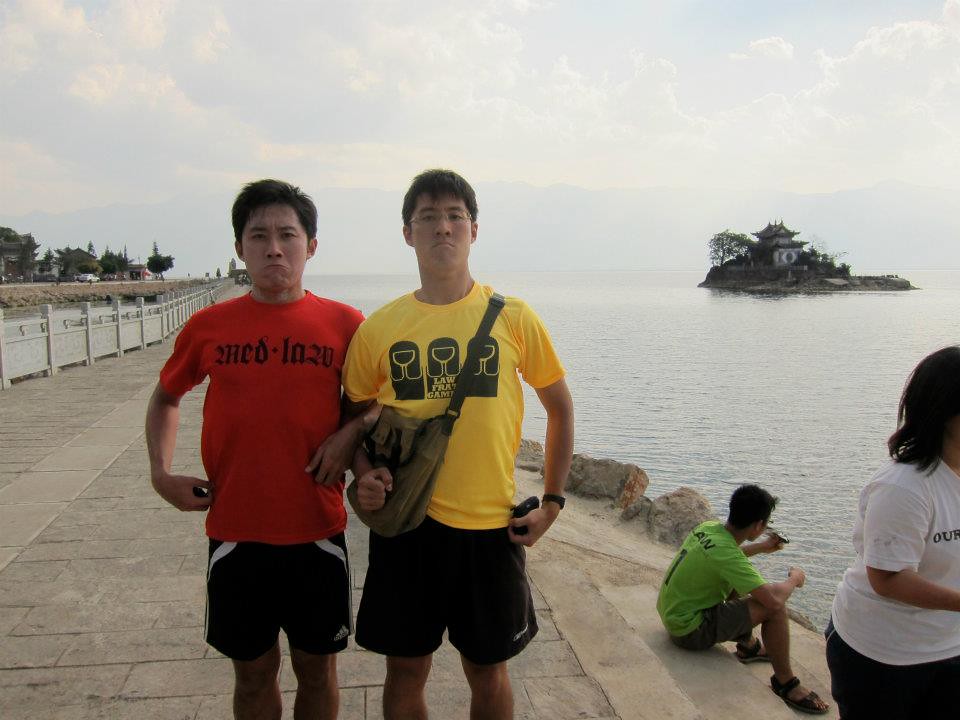 Our lovebirds, pictured at town of Wasi located at the outskirts of Da Jian Pang, Yunnan. Even though they were not convened in holy matrimony, they were peas in a pod.

Jaded by the drudgery in their academic pursuits, our lovebirds sought recluse in the mountainous regions of Shuang Lang in Dali, choosing to give back to society partly in hope to regain some of the vitality they have lost, but mainly to share the love they possessed with others — their love for food, culture, friends and each other.

The boys adored each other deeply, and their warmth was overwhelming; their volcano of love erupted, spewing its lava of affection to everyone near them — 20 other weary souls who decided that life has more meaning than Property and Contract Law. Together, they were a team on a mission and within the next 18 days, the threads of their experiences were weaved together to create a beautiful love story with the children and village of Da Jian Pang.

The team armed themselves with lesson plans to share teaching methodologies with the local volunteers. In a bid to gain the interest and to add variety to usual rote learning of the students during English lessons, the use of songs and games such as Pass the Parcel were incorporated into the lesson plans. 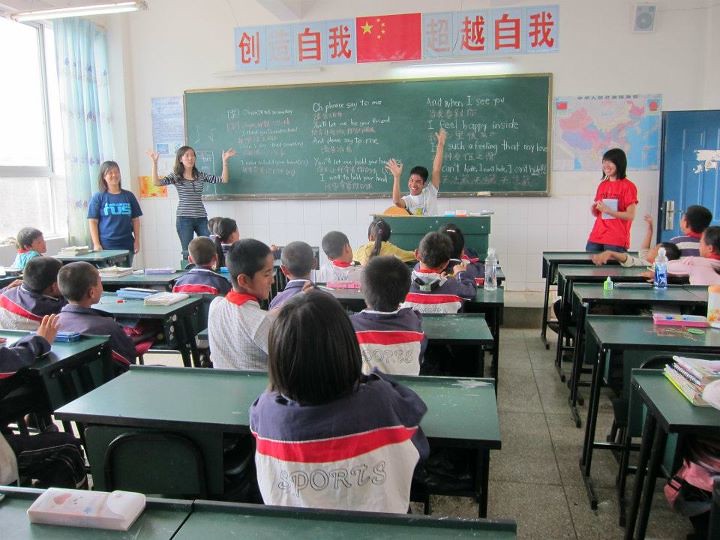 Music lessons were also incomplete without sharing Singapore’s traditional folk songs. In fact, the song ‘Chan Mali Chan’ had become such a hit with the children that it became a norm seeing them humming to the tune or dancing to the beat in classes.

Having experienced the advantages of multimedia visual aids during lessons back at home, the team also decided to make use of laptops and iPads for Science and Art lessons, and the vivid pictures flashing across the screens proved to be successful in engaging the students while stirring their imaginations. 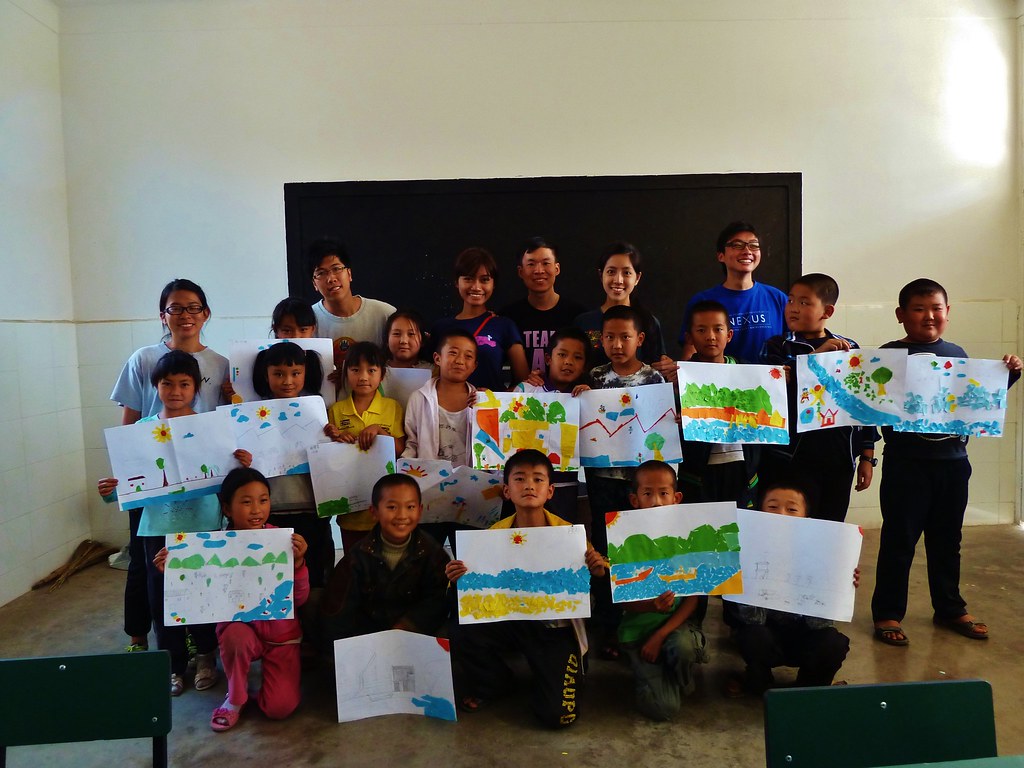 These teachers, who were paradoxically students taking their exams a few weeks ago, met up for  nightly debrief sessions to share their teaching experiences and to provide suggestions to each other on class management. Even though it was tiring having to handle a boisterous class of children day in and day out, it was the simple things that made a world of a difference — a class that was earnest in learning and a genuine “xie xie lao shi”(“thank you teacher” in Mandarin) sufficed. 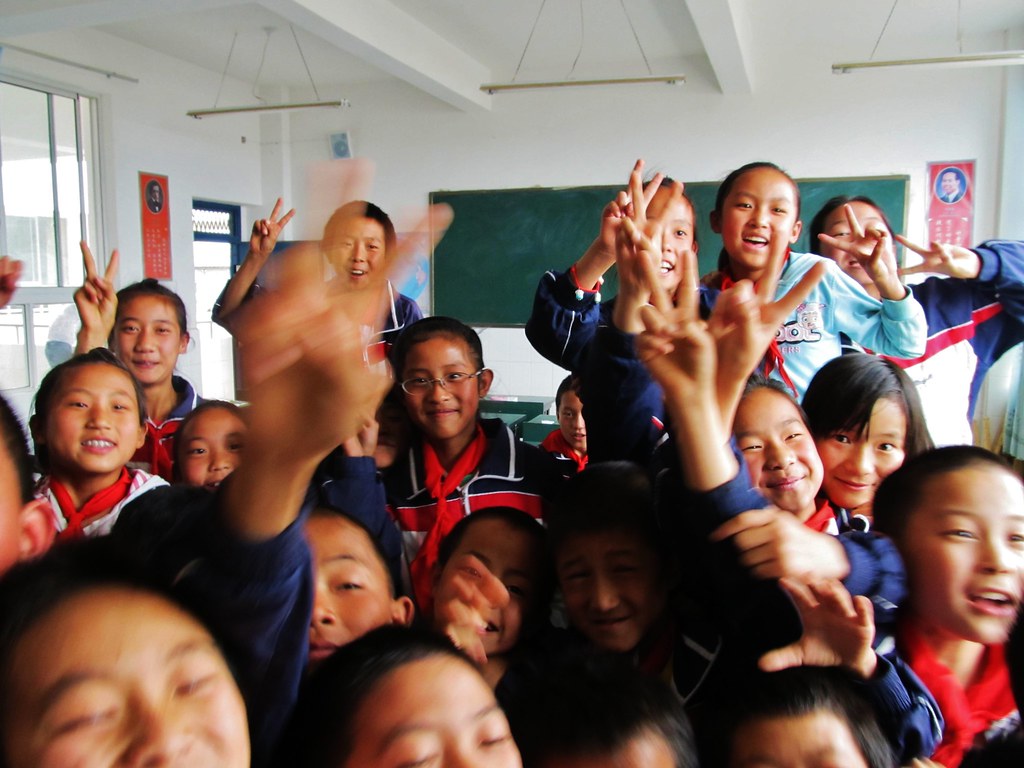 The students bubbling with enthusiasm before, during and after lessons

To express their love and gratitude to the children they have taught, the team decided to organize a Children’s Day Carnival. Preparations were not as simple as the team had thought when they came to know of the serious bullying history in Da Jian Pang, traced to a notorious pack of 12 year olds who were equivalents of the Godfather. This pack of bullies scared away many of children from the neighbouring villages, preventing them from attending the Carnival. 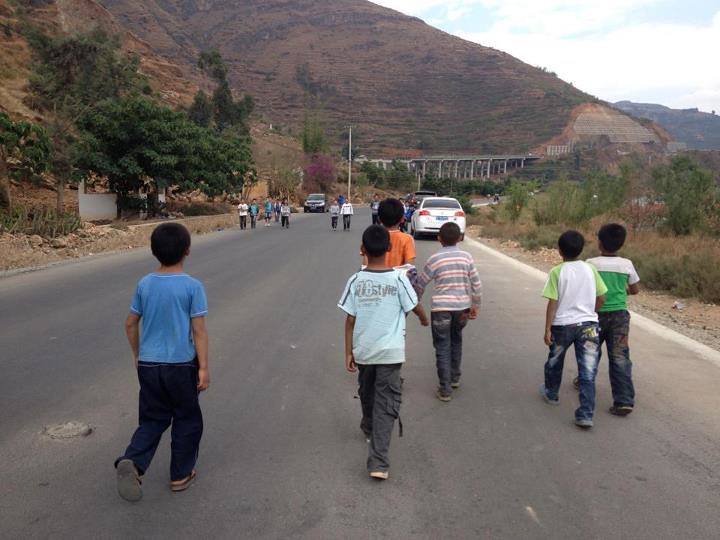 Our lovebirds, Daniel and Eugene, with their uncanny ability to communicate with children, were given the crucial task of protecting “The Little Ones” as they escorted the children from their school to the Carnival grounds. This measure proved to be necessary as a body search conducted on the bullies revealed the concealment of many weapons in their clothes ranging from catapult slings and rocks to mini nanchucks and penknives. Thankfully, with the strict safety enforcement by the team and the trusty bouncer, Isaac, the Carnival proceeded on without a hitch. 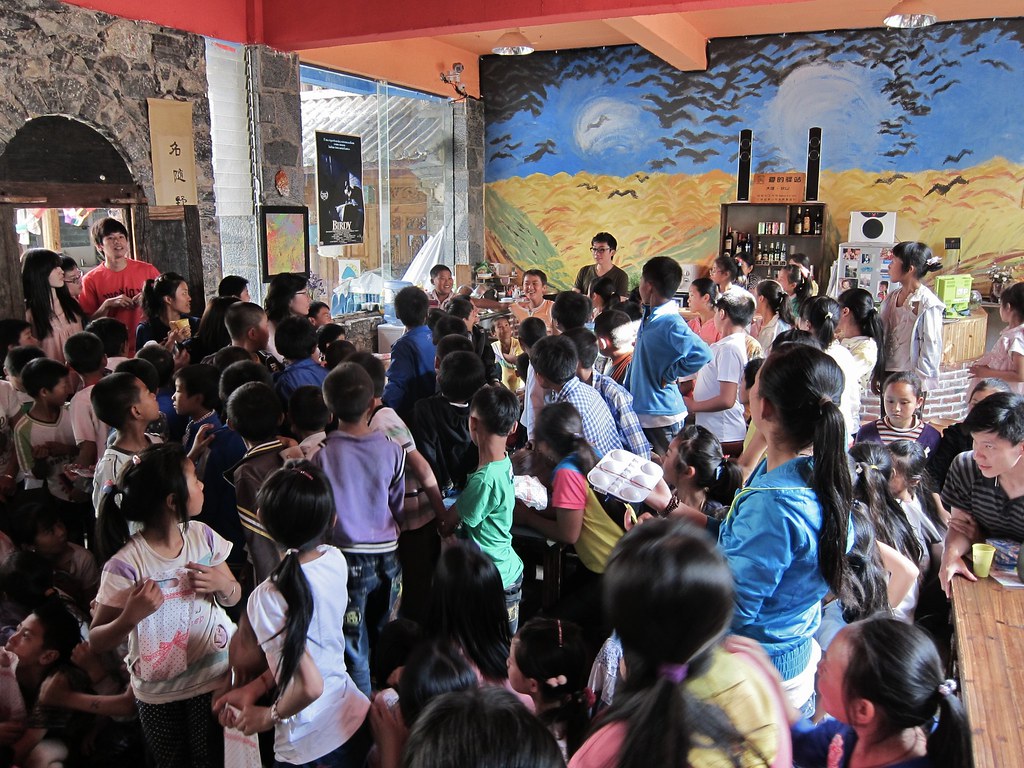 Like children drawn to the Pied Piper, the entire village of younglings gathered on the hostel grounds to be treated to an afternoon of fun and games. Childhood games such as Chapteh were introduced and Singaporean cuisine such as curry chicken was dished out. It was tiring work, but the smiles that were left on the children’s faces at the end of the day made everything worthwhile.

The Children’s Day Carnival proved to be a hit with the children and a second one was held at Huo Shan School, located 3000m above sea level and accessible only by a 3 hour trek up the steep rocky inclines of Huo Shan. The team made it up successfully, save for an embarrassing assault by an ass’s ass during the climb. 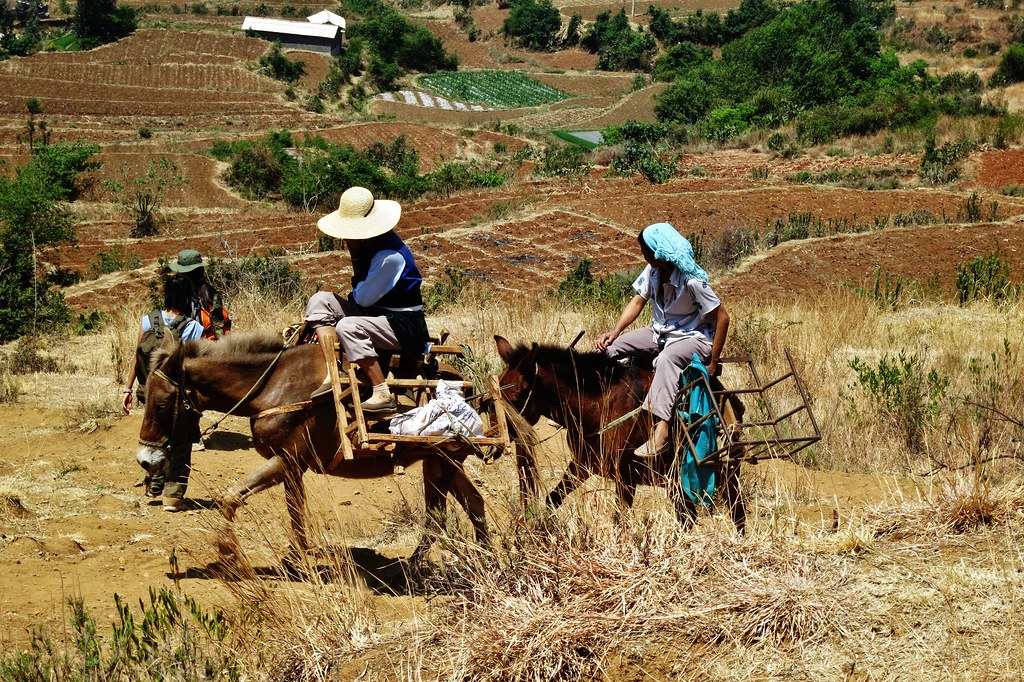 It was a memorable experience for the children in Huo Shan, who had never participated in a similar carnival before, as the host organization BlueTrack Aid never had the manpower to bring the required logistics up the mountain. 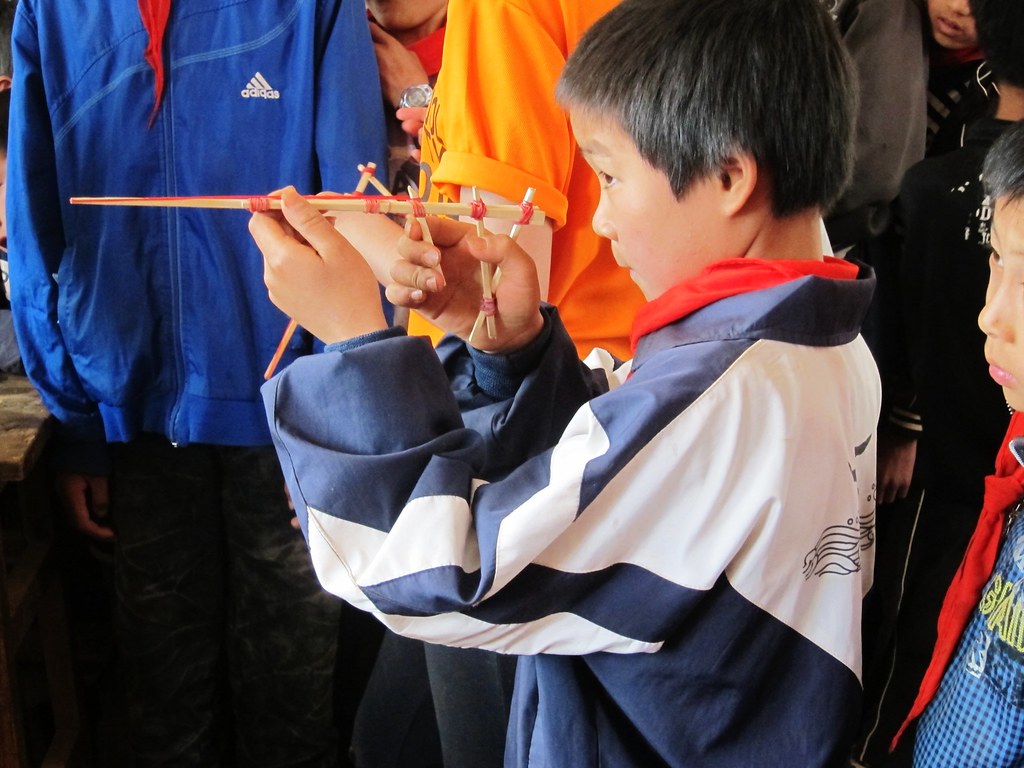 Indeed, it was hard to tell from the children’s beaming faces that they were experiencing a perennial drought that has wiped out not only their families’ crops but also the water supplies in the mountain. 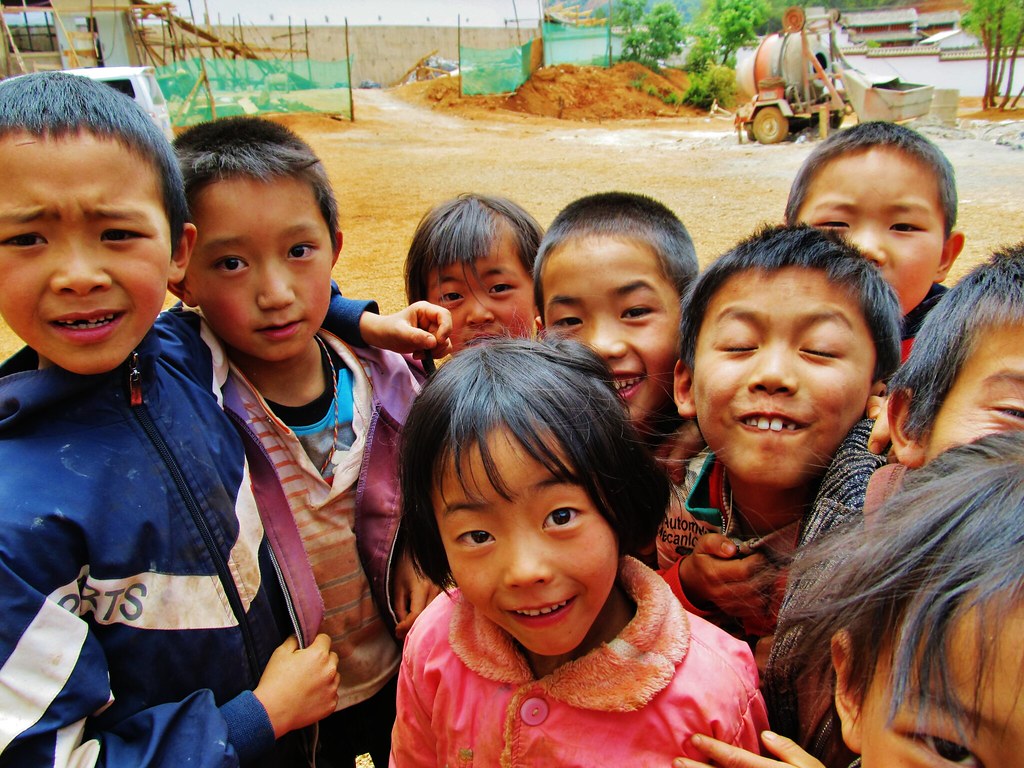 Despite having to tackle the drought, the locals treated the team with such hospitality that none of them could forget. During the overnight stay in Huo Shan, where the winds bit with chill, and the pitch dark dirt roads were illuminated only by the stars overhead, the team that was exhausted by their climb up the mountain got to enjoy a heartwarming meal whipped up by the locals, specially to thank them for organizing Children’s Day for the students at Huo Shan. The people there had seemingly so little, yet so much to give. 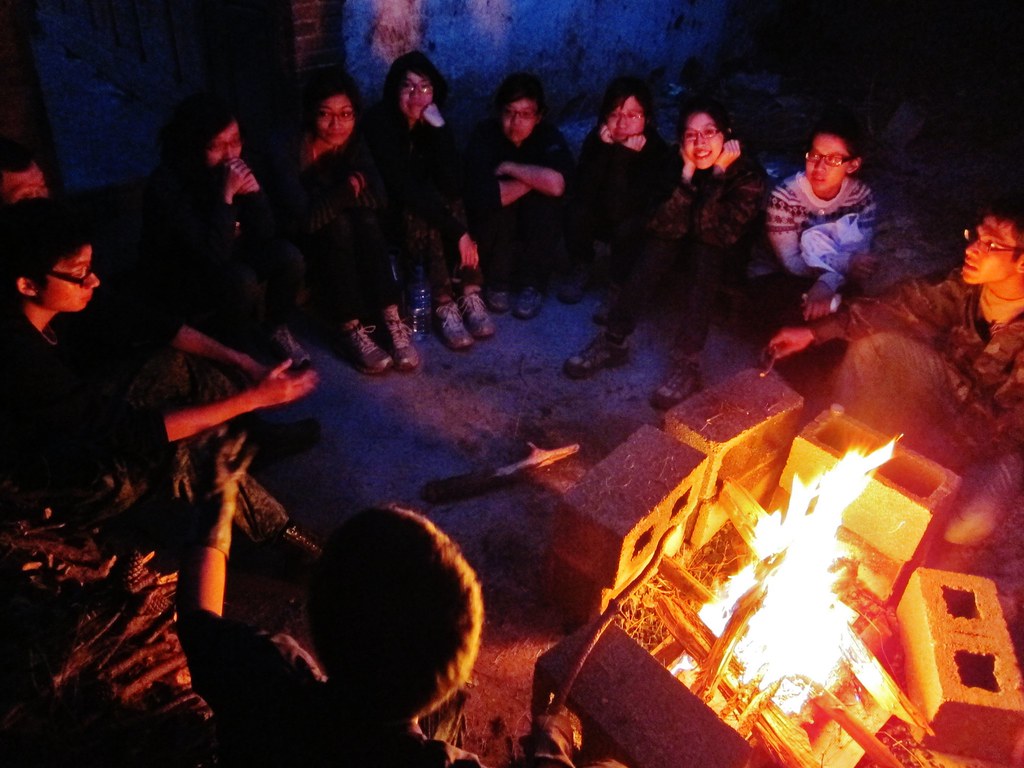 Self-made bonfire to warm ourselves at our night in HuoShan

Apart from these deliberate efforts to get to know the people of Dali more, there were many unexpected but pleasant occasions that provided a window into locals’ lifestyles and psyche. For one, the nightly participations in the traditional mass dances with the elderly women folk became a post-dinner exercise. Any language barrier was cast aside amidst the exchanges of smiles and simple gestures as the villagers graciously accepted the group of 22 into their circle of friendship. 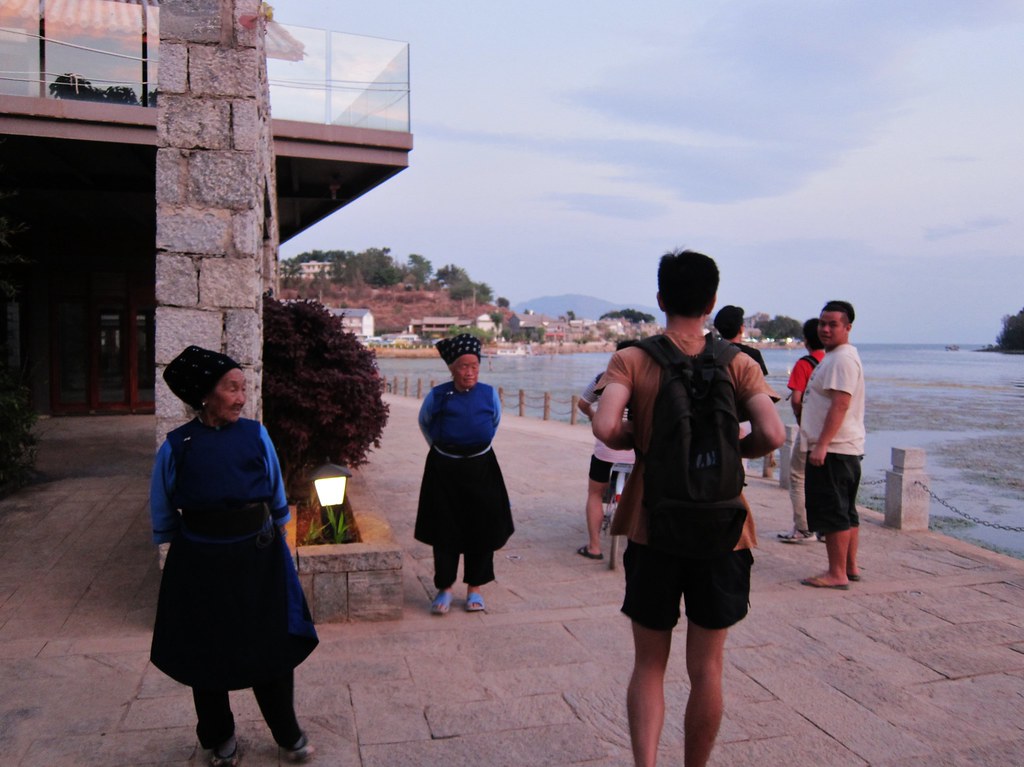 It helps particularly if old ladies take a fancy to you

If this unspoken but mutually understood relationship had warmed their hearts, what more had they gained from the conversations with the locals, who had seemed to find that elusive happiness all of us grapple in the dark for, despite the little they had. One of the volunteer teachers, whom many would attest as having achieved a permanent Zen-like state, was an inspiration for his redefinition of the notion of what counts as success, as were the many other teachers who gave up jobs in the cities to volunteer at BlueTrack Aid. 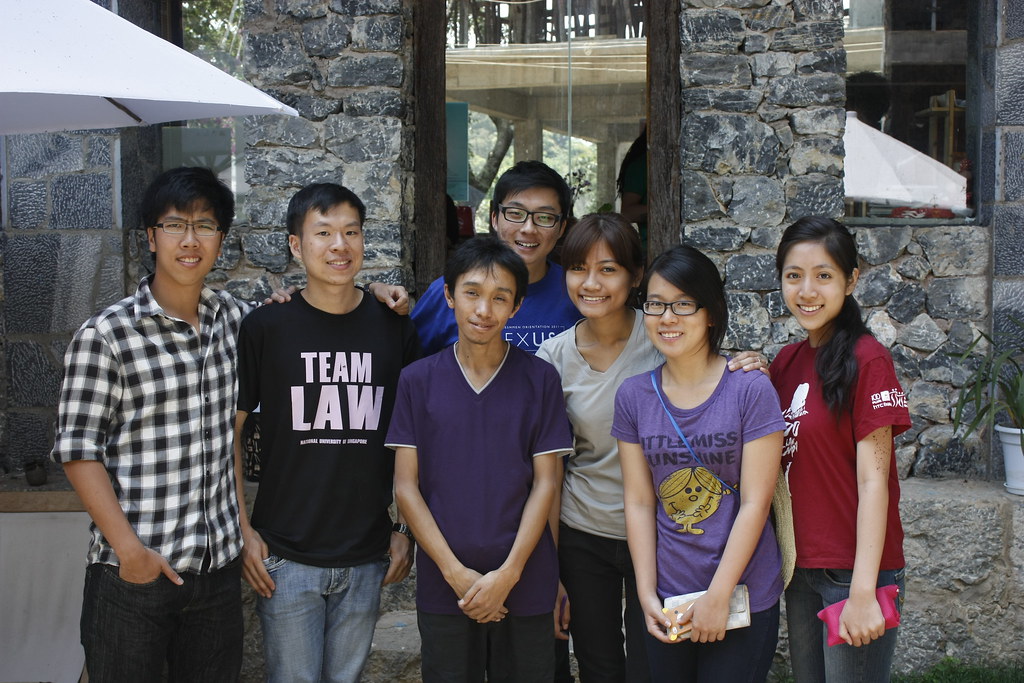 Zen-like teacher posing for a picture with his prodigies

But no Singaporean can find love in a place that makes him go hungry. The food they ate in Dali was simple, but the company more than enough to keep them warm and contented. 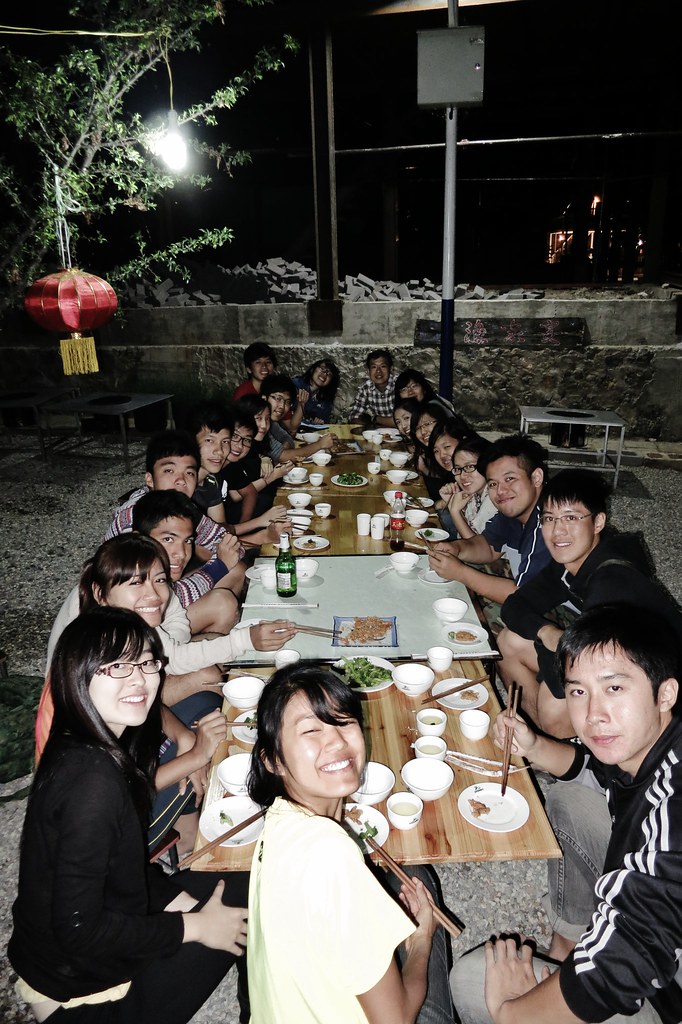 Our team of 22 at a seaside “restaurant”

The nightly ventures for “rou chuan” (meat skewers) and the mandatory daily visit for a bowl of braised beef noodles from a Muslim stall (which some argued to be more delectable than Crystal Jade’s and at a quarter of its price) provided the team with sustenance to keep them going throughout the day. 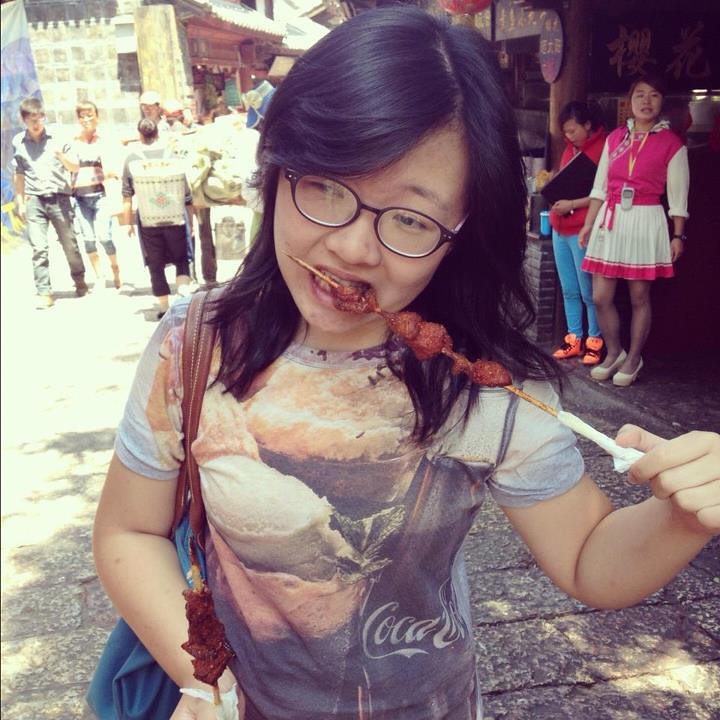 This love for food came with its own dangers of course, and only a few team members survived the trip without having that mandatory bout of diarrhea. 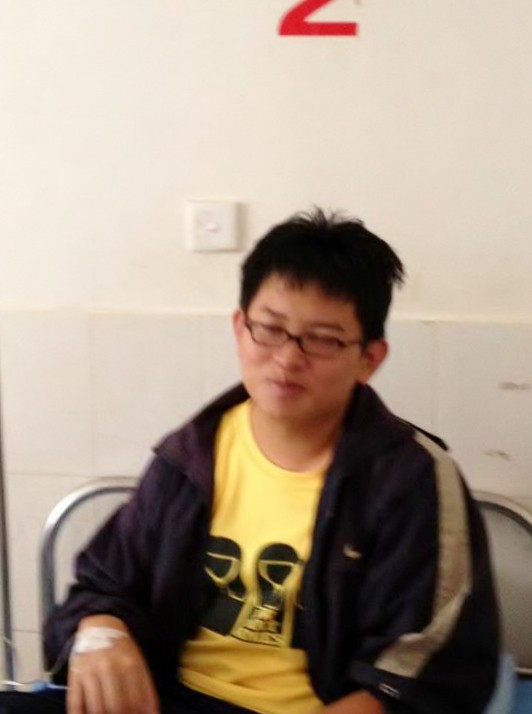 The journey culminated in the team’s participation, as represented by Haziq and Isaac, in a local fund-raising event for the Huoshan drought. They performed a medley of songs – including the patriotic tribute of ‘Home’, during the star-studded concert. 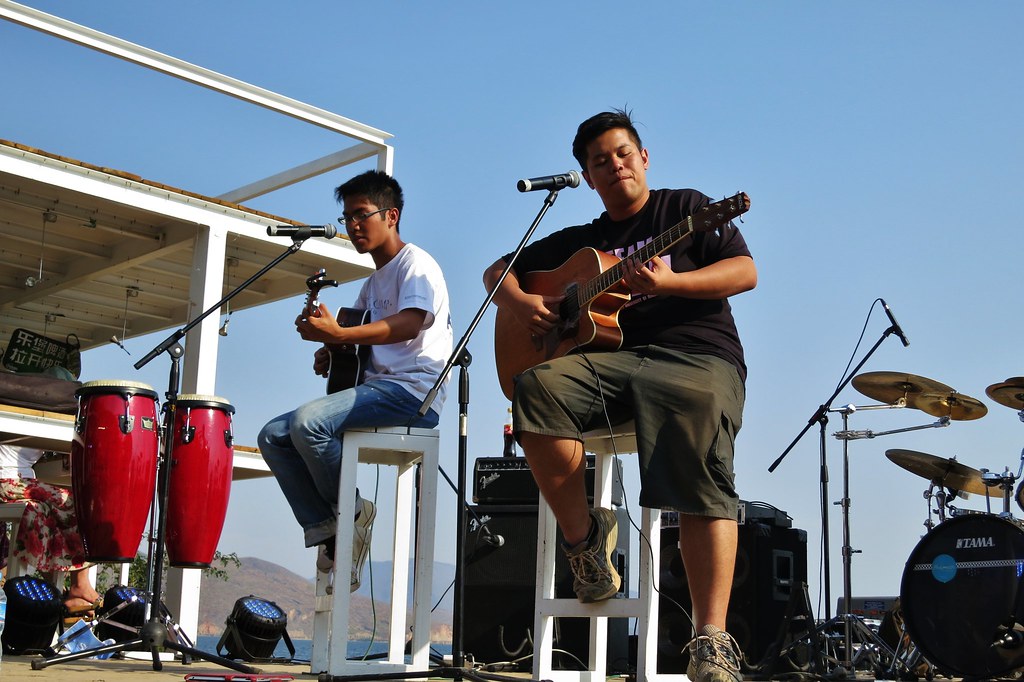 Our stars’ passionate performance, complete with the magnificent backdrop of the Er Hai

And so, in 18 short days, a tapestry of togetherness was woven to include a lifetime of memories. 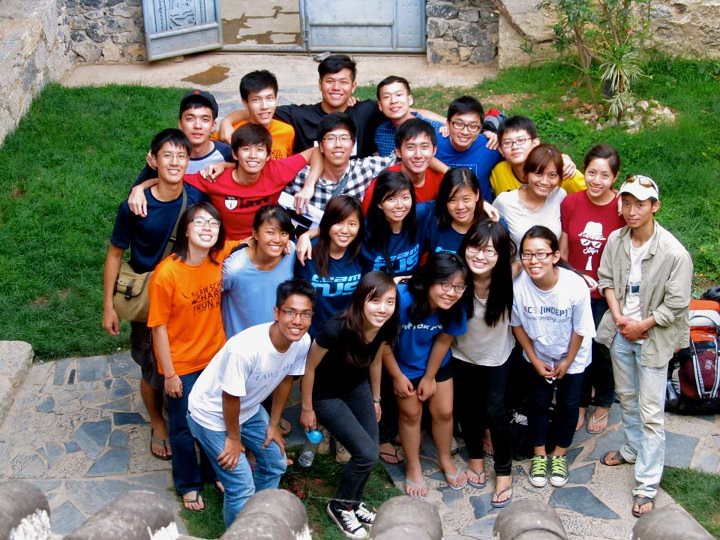 Law School’s first-ever Overseas Service Learning (OSL) Trip to Dali, Yunnan in China was an initiative of the AY2011/2012’s Year 2 Class Committee. Applications were made open to Year 1-4 law students and we would like to encourage the coming Year 2 Class Committee to continue this initiative, whether at BlueTrack Aid or elsewhere. In any case, if you are interested in leading the next OSL team, do leave your contact details at [email protected]. Find out more about our preparations for the trip at http://nuslawosl.wix.com/nuan